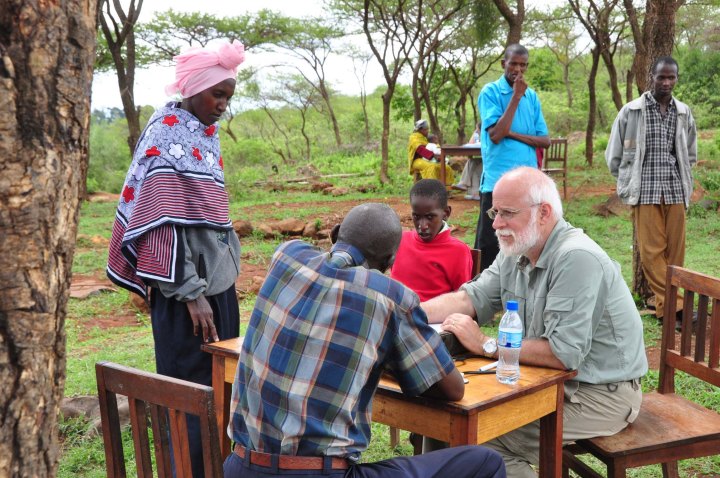 Evaluating a patient in 2011 with Dr. RIngo

Kambi ya Simba is another village in the Mbulumbulu region and about half the distance of Upper Kitete. When I had first come here in 2011, there was literally nothing to speak of in regard to their medical facilities with only a very small dispensary that wasn’t sufficient for us to work out of so we held our clinic in a small field in front of the church. Patients would sit on a bench made out of a log and wait their turn to be seen. Quite often, the patients waiting would slowly encroach upon my open air office out of their interest in what was going on and I’d have to repeatedly ask them to sit back on the bench so as to maintain some semblance of privacy. I would frequently remark to friends that I had the nicest office here that anyone could ever imagine. 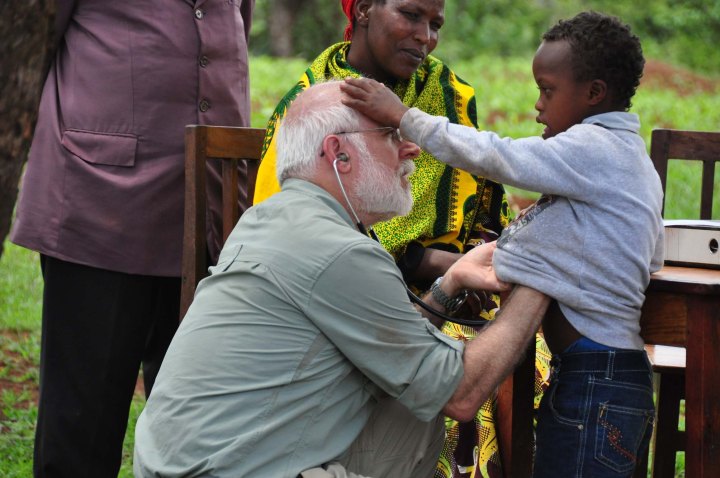 Over time, though, Kambi ya Simba has acquired an ever increasing number of buildings here for medical care and my outside office has vanished and has now been replaced by a state of the art dispensary, wards, offices and other equipment that have now developed into a lovely facility. A few years ago, I had arrived for mobile clinic only days after the prime minister had been here with lots of fanfare including a small monument, plaque and flagpole in the center of the grounds. Pulling into Kambi ya Simba that time, I commented to everyone that I was just a bit surprised to what lengths they had gone to welcome us. As the commitment by the government has continued to improve the facilities here, our clinic has become that much closer to what we have at FAME, though we are still working as a mobile clinic meaning that we do not have access to labs or X-rays without sending patients back to FAME for those.

Kambi ya Simba dispensary. Note the not uncommon occurrence of pushing cars here 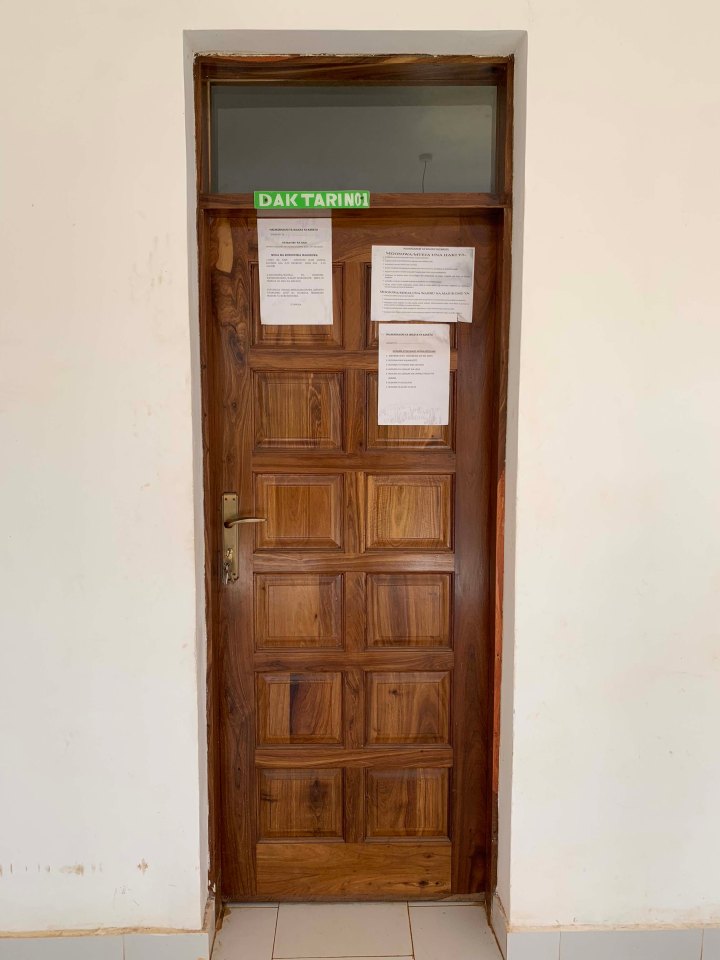 One of our clinic rooms at Kambi ya Simba 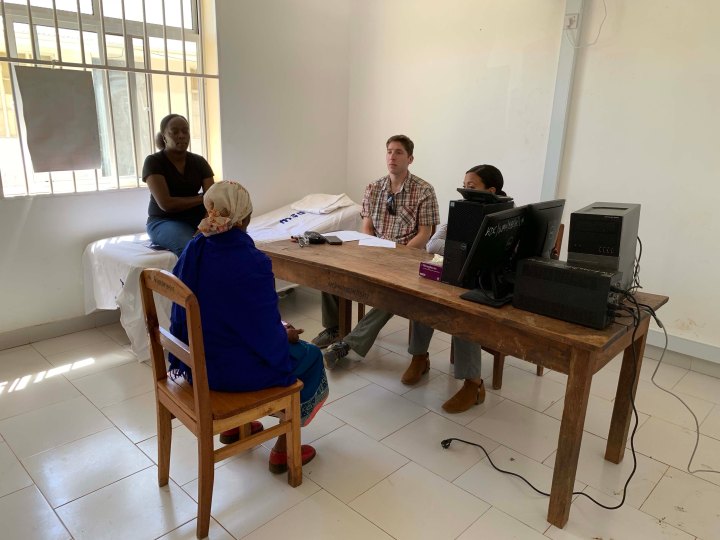 With the shorter drive to Kambi ya Simba it means we get an earlier start with our patients. We weren’t sure how many patients would show up, but in the end, there were quite a few and there were some fascinating pediatric cases so that it was extra nice having Dan and Marin here to sort them out. One very interesting patient we saw was an infant that had reportedly been developing normally until about three months of age when, following their Tdap vaccinations, the child began to become very weak and floppy and their motor development screeched to a halt. The baby was now seven months old and have very reduced axial tone, but reasonable strength, normal reflexes, and seemed cognitively intact. It was a very puzzling story, but the mother was quite clear that the child had been fine before their vaccinations that also included a polio vaccination, raising the question of whether this could possibly have been an issue with the polio vaccine having reverted since it was a live attenuated oral vaccine and in very rare circumstances can cause cases of polio. After many emails, text messages and a phone call to one of the neuromuscular folks at CHOP, it was decided that this was very unlikely to be polio, but was rather more likely a progressive muscle disease and that without further testing it would be impossible to determine what it was. Furthermore, regardless of the diagnosis, it was exceedingly unlikely that it would be a treatable process. In the end, it was decided that we would try to get an echocardiogram on the baby to determine whether there was any involvement of the heart.

Dan and Marin discussing a baby

Dan and Marin continued to have very interesting patients throughout the day and any thought of leaving here early to try for the African Galleria was pointless. We continued to have two adult rooms and one pediatric room throughout the day which seemed to work very well with Marin seeing the children on her own and Dan staffing her along with some of the adult cases. Our lunch today turned out to be the boxed lunches again, even though I think all of us would have been much happier with the Tanzanian food we had eaten yesterday. We ate again in the vehicles which is usually the case so as to avoid eating our meals in front of the residents here. These are the smaller things you have to think about here that wouldn’t even enter your mind at home.

Marin consulting on a patient with Chris translating

It was a steady day of patients that kept everyone quite busy and though we had hoped once again to make another attempt at getting to the African Galleria, it was not to be as our window of opportunity closed quickly. Having learned the hard way with all of the dust we ingested on the first day, the two vehicles were now driving separately and it was much better experience for everyone. We arrived back to FAME in time to relax for the evening and catch another of the beautiful sunsets here as we had plans to go to Happy Day after dinner and then to The Golden Sparrow for some dancing. The Golden Sparrow is a restaurant and dance club that opened about two years ago and is the reincarnation of Carnivore, which was the previous iteration of this establishment. Carnivore was a dirt floored restaurant that served only roasted chicken, chips (fries), and fried plantains as well as lots of beer and wine. They also had a very small bar with a smaller dance floor that could accommodate only a handful of people. A night at Carnivore for dinner and dancing had been a regular highlight of our trips in the past.

Kambi ya Simba dispensary. Note the not uncommon occurrence of pushing cars here

Two years ago, the owner of Carnivore closed its doors or, more accurately, it’s gate, and opened The Golden Sparrow. The Sparrow is a much more upscale version of Carnivore, and, to be honest, has much less of the charm and character than the original. There is a huge outdoor area for eating that does serve the same delicious roast chicken that was served at Carnivore along with a much larger menu than the original. There’s also an outdoor bar that serves whatever drink one could imagine. What really differentiates the Sparrow from Carnivore, though, is the dance club. It’s a very large and very dark room with tables and chairs and, most impressively, a disc jockey playing songs and taking requests. There are many locals here and far few fewer ex-pats, but everyone is enjoying themselves just the same and this has now been one of the social highlights of our trips here. Tonight, it was our entire neuro crew plus Katherine, and absent Dan, who claimed to be tired and not up to it, though I have no independent confirmation of this claim. We all had a wonderful night of dancing and had set a midnight curfew (which I had later regretted as it should have been a more conservative 11 pm considering we had a 7:30 am talk in the morning to deliver). Tomorrow we would also be heading to Rift Valley Children’s Village.

Most of the gang at Happy Day