Note: Thanks to Katherine Kuhlmann, FAME’s Communications and Marketing Director, for sharing her photographs with me. 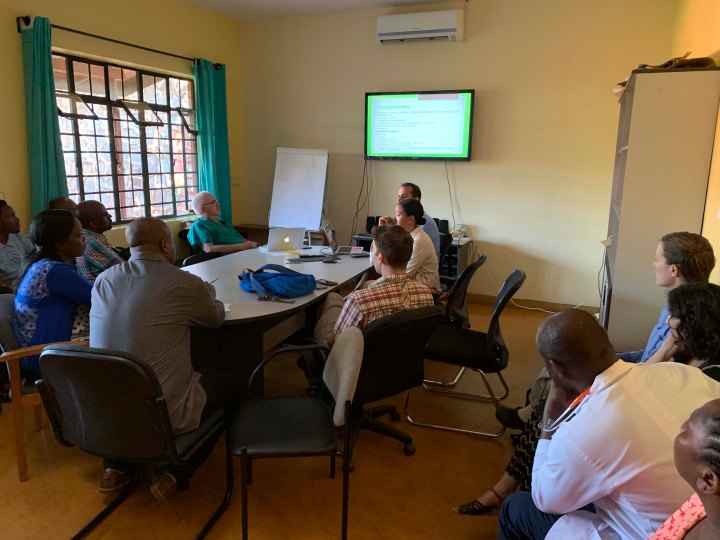 Dan and Adys presenting in the morning

Well, I must admit that everyone was just a bit slower getting started this morning after our night at The Golden Sparrow. Everyone had a great time, though, so it was well worth it and it was an excellent release for everyone. It was also Thursday, so it was another morning of teaching and Adys and Daniel had volunteered for this one to discuss altered mental status. As expected, even with the hurdle imposed the by Sparrow, they did an excellent job of discussing this topic which can often be very difficult for the non-neurologist. Correctly identifying a patient with an encephalopathy as opposed to an aphasia will completely change one’s differential and what evaluations and treatment are recommended for the patient. It is not always as straight forward as it may seem and the differences can sometimes be very subtle, even for a neurologist. Adys and Daniel covered the topic perfectly and alluded to a number of the specific features that we use to differentiate them. 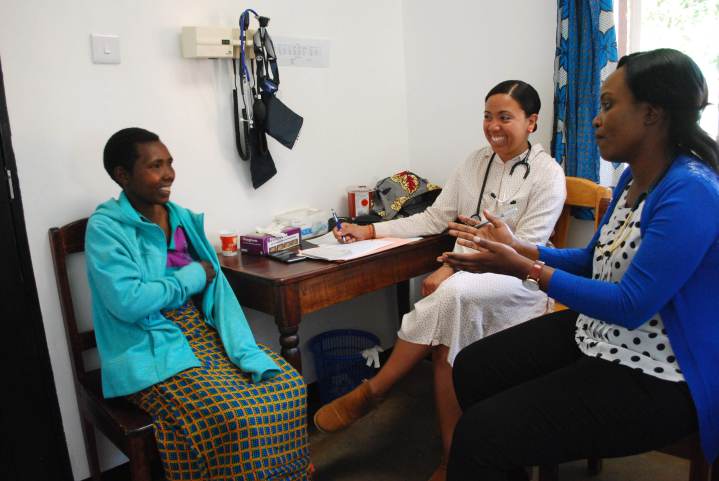 Adys and Ann evaluating a patient

After our talk, it was matter of getting everything together for our trip to RVCV. We were planning to take only one vehicle today as Chris and Michael, our interpreters are both from there and therefore would not require a ride in the morning. Still, this meant that we would have twelve people needing transportation there and back as both Katherine and Phoebe were also planning to come. My Land Rover has seating for nine passengers, but if we put four across the back instead of three and also used empty plastic soda crates between the second and third row of seats, we could reasonably and safely fit the additional passengers in for the 45 minute trip to the children’s village. We wouldn’t need lunch today as we are served a wonderful midday meal by the cooks here who also serve the other volunteers at the village.

Jon and Daniel acting out their exam

The drive to RVCV is as spectacular as just about anything we’ve seen here. Heading from Karatu in the direction of Ngorongoro gate, we leave the tarmac just before the final hill and begin to head in a westerly direction along a ridgetop that overlooks wonderfully fertile farmland in all directions. We drop down into several ravines, only to rise again on the other side of each when we finally come upon acres and acres of coffee bushes that surround the entire area including the village. For the full story of Rift Valley Children’s Village, you’ll have to go to their website, but it was founded by India Howell, who is originally from Boston, and fell in love with Tanzania while on safari here (sound familiar?) She worked for bit in the tourist industry, but quickly discovered all the needy children, some of who lived on the street and others whose families could no longer care for them. India partnered with a Tanzanian to develop the concept of a children’s village rather than an orphanage, where all the children are adopted and raised here as their home with no fear of having to leave until they are over 18, and even then, they have their own housing just outside the village. There are children from all ages here, all living in their own homes separated by age and gender, each house being run by separate house mothers who are from the outside village.

Marin and Dan conferring on a patient

Daniel and Jon present a patient to me

There is a primary school situated just beside the children’s village and this is where all of the children attend school every day. Early on, India realized that sending her children to a school where the other children were constantly sick due to the poor access to healthcare and the poor personal hygiene. She offered to partner with the local community to bring in more teachers that she would help pay for and also developed a regular clinic that would be staffed by FAME and would occur every other week and would see patients from a catchment area that included the surrounding villages along with the children’s village. When I started the neurology mobile clinics here, it was an obvious choice to also accompany the FAME doctors when they came, but about two years, it was decided that FAME would no longer have a regular clinic there in which case, we decided to continue with it as part of our mobile clinic week. It is now only a neurology clinic and any patients needing general medical care will be sent to FAME by vehicle. 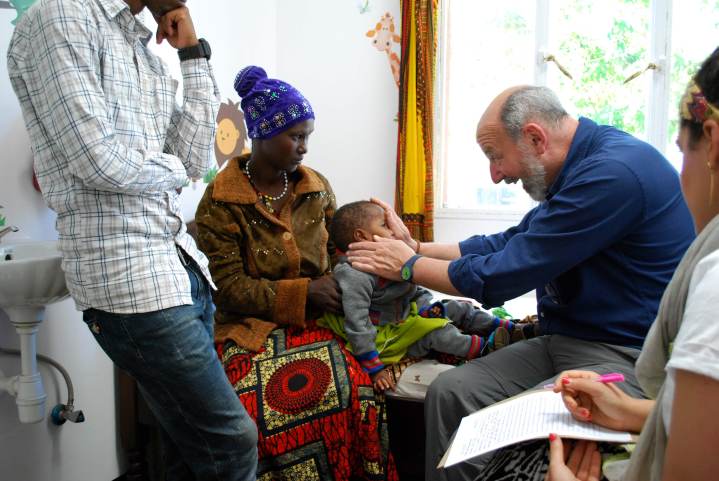 Who’s checking out who?

We see a wide array of patients here and much of them are obviously pediatric, but the bulk of the patients seen by us here are epilepsy patients for various reasons. Having Dan and Marin here was a huge plus for us this visit as was the fact that the clinic area had been extensively rearranged since last October. We now had four examination rooms that were all set up for us in advance along with a room that we could use as our pharmacy. All of the patients to be seen that day had already been organized into adult and pediatric cases and had also been fully triaged so that we were only seeing patients with neurological complaints.

Marin and Christopher evaluating one of our long term patients

Adys’s very first patient of the day was a young man with poorly controlled epilepsy accompanied by his mother. The episodes were primarily causing loss of consciousness and some abnormal behavior and we discussed the need to continue him on seizure medication because of the nature of his seizures, but after we were finished discussing his case, we heard a very loud commotion coming from the room only to find him on the floor trying to crawl into the corner of the room with a frightened expression on his face. The seizure lasted only a minute or so and I was able to get him situated on the floor so he wouldn’t injure himself nor would he injure me. As he settled down, I was finally able to help him up onto the bed in the room where he remained until he came around and his post-ictal lethargy had improved to some degree. This was a very classic focal seizure, probably of frontal or temporal origin and it was the same as those that he had been having at home which was very important regarding the diagnosis and the fact that seizures are, by definition, very stereotyped. His medication was adjusted to place him on a more therapeutic dose.

Marin and one of her young patients

Adys and Dr. Annie presenting a patient to me

Marin saw a fascinating patient that became a real dilemma and something that we’re still working on. The baby was reported to be about 15 months old and had failure to thrive due to inability to take food adequately, having already been to a feeding program in Arusha, but failed to gain any weight there. The problem was that the baby examined more like a normal three-month-old from a cognitive and stature standpoint and just seemed to have a bit of diminished tone. No matter how hard she tried to clarify the history with the mom, the story remained the same which was completely perplexing. In the end, we referred the baby to FAME to obtain x-rays of her hands and long bones as well as an abdominal ultrasound to rule out some organomegaly consistent with some metabolic storage disease. The ultrasound turned out to be normal and the films will have to be read by someone at CHOP, which I will take care after my return.

Sheena and William evaluating a patient

Sheena catching up on her documentation

We always look very much forward to the lunches here as the house mothers cook amazing food. Today, it was fresh baked bread rolls with hamburgers, French fries, fresh salad and for dessert, chocolate oatmeal balls that were delicious. It was a wonderful meal that was well appreciated. After lunch, it was back to work to see the remainder of the patients and, eventually, a trip to the duka (store) run by Arturo and has a great selection of objects created by the Rift Valley Women’s Group. Everyone came back with a back of items and seemed quite happy with the selections they’d made. Sheena missed out on the group shopping spree and went over later and when she’d been gone for some time, we decided to call over to make sure she was still alive. She was, of course, and was also extremely happy with her purchases.

Daniel closing his charts so they don’t autoclose 😉

Phoebe and Dan during a break in the action

We left Rift Valley Children’s Village after a very successful and efficient day of seeing patients and a real sense of accomplishment. The cases that we’d seen were solid neurology and all of which we had something to offer, whether it was immediate treatment or at least some direction to head in regard to further investigations if appropriate. I took the more scenic drive home that turned out to be tremendously smoother than the primary road much to everyone’s joy as we were still loaded with the twelve occupants in Turtle and the less jostling meant happier passengers. This route does have a very, very steep downhill section driving to the bottom of a ravine and then a very, very steep uphill section coming out, but everyone held on tightly and Turtle took the hills like the pro that she is and in full Land Rover tradition.

The waiting room at Rift Valley

We were scheduled to go to Susan and Frank’s house for the evening as this was the last night at FAME for both Dan and Marin for we are all heading to the Serengeti tomorrow, except for Daniel who decided to forgo the trip (despite just bit of FOMO) as he would be going there the following week with his fiancé after our time at FAME. Before going over to their house, though, we had to make what I thought would be a quick stop at the tailor’s shop to pick up all of the clothes that everyone (except me) had made from the wonder kitenge cloth ubiquitous here in Tanzania. It ended up being just a bit longer of stop than I had anticipated as there was a bit more shopping going on than I had been led to believe would occur, though I was finally able to rest everyone out of the shop and we were on our way. We had one more stop scheduled for next week, though, to pick up the additional orders made.

Daniel and Jon evaluating a patient with the assistance of Katie, the nurse at RVCV 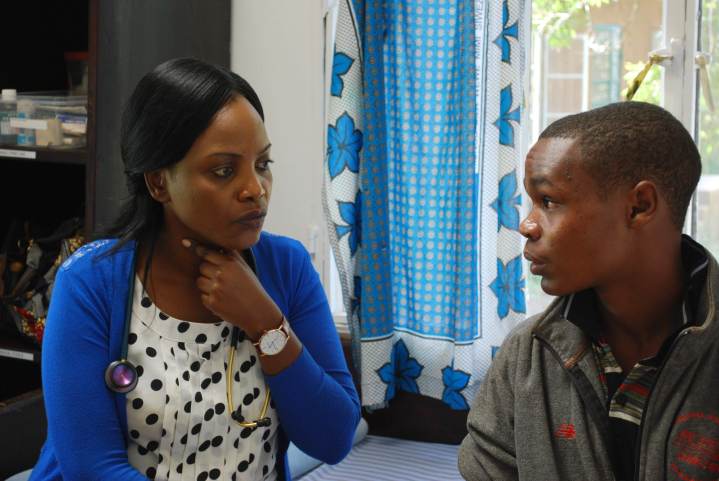 Susan and Frank’s get together was a very nice affair as it always is at their home and we dined on wonderful local Camembert cheese from the Shangri La farm and both beef and vegetable samosas from the Lilac Café. Mixed with Safari beers, wine and Stoney Tangawizi, we were all quite happy and there was little need for the dinners that had been prepared for us that night, so we all saved our mac and cheese to eat the following day for lunch before our departure on safari.

Visiting the tailor’s shop at the end of the day