Our mobile clinic week was now underway and we were returning to Upper Kitete today for our second clinic day there. We had had another site selected, but things had fallen through as far as scheduling was concerned and there really wasn’t enough time to find a new location given the amount of planning and announcements that have to take place for this. Up the road from Upper Kitete is the village of Lostete, which is the last village on the plateau and the end of the road literally, though we were hopeful that patients from that village would come visit us just down the road. Also, the road to Lostete is very often a horrific mess once the rains begin to fall and then it’s a very iffy proposition to make it up there. So, we’ve settled this year on making advance announcements there that we’ll be in Upper Kitete for a second day with the hope that patients will come there to be seen.

Tuesday mornings are education day and we’ve been asked to give lectures for all the days that we’re here save for the two previously given by Ann and Vic. With our pediatric neurologists here, it certainly made sense to have them give some of the talks and today’s was going to be on hypoxic-ischemic encephalopathy, or HIE, which is something seen at birth and not infrequently seen here. Marin filled the whiteboard with lots of information regarding the causes of HIE, both maternal and fetal, how to evaluate the children and, then, what to do for them. In the United States, it is now standard to immediately begin cooling the children which improves their prognosis as it reduces the amount of injury to the brain. What is really most important, though, as emphasized by both Dan and Marin, is that the child is not allowed to be too warm, such as a fever. It isn’t necessarily the most important to have expensive cooling beds or blankets, but rather to aggressively treat fevers and to not cover the baby or use the incubators warming system as readily. Allowing the baby to remain cool and treating any fever will probably capture a significant amount of the benefit seen with cooling such as they do at home. It was a great talk and very, very relevant considering the number of babies now being born at FAME along with those who are brought here immediately after birth. Even a small benefit and improvement in prognosis of these children will be immensely helpful to their quality of life and that of their family who must care for them for many years.

Yesterday, we had followed the other vehicle and had essentially eaten their dust for the entire drive to Upper Kitete, or an hour and a half. Since I’ve driven this route now for several years and know it well, there was really no reason in regard to directions, but there is some security in knowing that if we had any mechanical problems along the way, there would be a seasoned driver/mechanic there to help. Last October, we had just such a problem with Turtle and were without a driver when our alternator died leaving us about an hour out of Karatu essentially dead in the water. Thankfully, we had some semblance of a cell signal and were able to call Soja, who is FAME’s mechanic, to come rescue us with a new alternator and install it just as darkness was falling. There is no AAA here and for readers of my blog, you are well aware of some of the sticky situations that we’ve gotten into in the past, some due to mechanical failures and some due to pilot error (getting stuck in the mud in Tarangire several years ago).

FAME doctors focused on Marin’s talk while a Maasai woman does her laundry outside.

So today, we took off well ahead of the FAME Land Rover as that way if we did have a breakdown, they’d find us easily and, perhaps more importantly, we wouldn’t have to suffer the clouds of dust that we did yesterday and which left the right hand side of my face with enough dirt on it to pot a plant. The drive went smoothly enough without incident and was tremendously more pleasant, though with each passing car, everyone still had to quickly slide their windows closed so as to avoid filling the car with pounds of dirt. Needless to say, the necessity of taking a shower as soon as we arrived back home was a given, even if it was typically cold as the kuni boilers (a wood fired hot water heater that is used here) are only fired in the morning and by the end of the day, the hot water and fire have been exhausted.

We arrived to Upper Kitete a bit earlier than yesterday as we were hoping to get to the African Galleria this afternoon to do some shopping. It also turned out that our patient volume today was fairly light making us even more hopeful of the possibility of our shopping spree. For lunch yesterday, Angel had purchased lunch boxes for everyone from one of the local restaurants. Lunch boxes are a staple here with everything revolving around the safari business as they are carried with you into the parks to sites that are good for lunch – i.e. no dangerous animals roaming around or those that are designated picnic sites. At certain places, you have to eat in your vehicle, such as Ngorongoro Crater, where the kites drop out of the sky to steal your food right out of your hand and in front of you face. Today, we decided to pick up a more traditional Tanzanian travel lunch that included a number of primarily deep fried items such as beef samosas, vitumbua ( a fried rice cake),  egg chops (a battered and deep-fried hard-boiled egg), sambusa (deep-fried, battered vegetable bites) and donati (yes, just as you might have imagined, donuts). All of this with a side of bananas and for drinks, various Coca-Cola products including Fanta passion and Stoney Tangawizi (both of my favorites). On our last visit, we discovered that they had actually released a sugar-free version of the latter called Stoney Zero, but I will have to admit (after many trials) that the sugar-free version is not nearly as tasty as the regular.

The patient flow was not overwhelming or the day, allowing us to finish up shortly after lunch and begin to pack up our things. As we were doing so, of course, a piki piki drove up with three men on it and as they dismounted it became readily apparent that the man sandwiched in between was actually unconscious and had to be carried to the grassy area in front of the dispensary. There are few things that get our attention more than an unconscious patient, so everyone quickly went over to assess the patient who was breathing just fine and had a good pulse, so that was quite reassuring. When it was eventually learned that he was merely inebriated, we were all a bit relieved as he was a very young patient and had that not been the case, the differential would have been quite large and nothing that we would have been able to handle here so he would have had to come back to FAME with us. We departed Upper Kitete that afternoon with the drunk patient having been carried into the nurse’s office with the plan to manage him there and quite confident that they could handle the situation on their own. 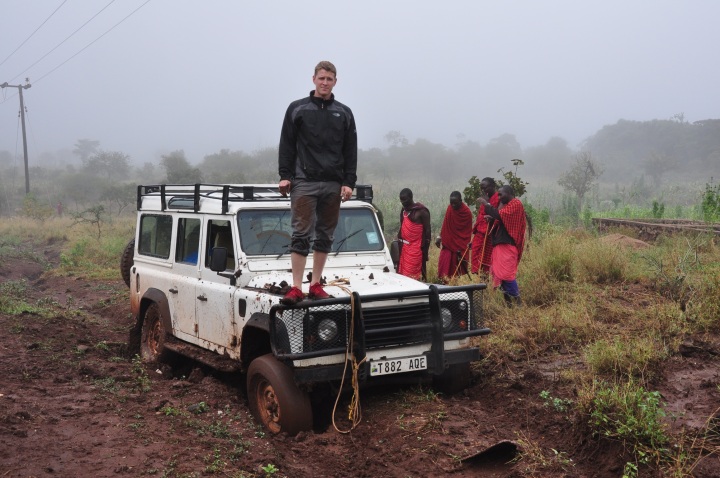 Hopelessly stuck in the mud

The plan was to take an alternate route to the tarmac as we were planning to go to the African Galleria just outside the village of Manyara. This road takes off about half-way home and used the be the road we used for every trip to Upper Kitete, but the other road we now use was found to be quicker and more reliable. Immediately after starting down this road, it became readily apparent that this had been a wise decision as the road was in horrible shape and this was without any rain. Had it been raining, this would have been an incredible mess for certain and would have brought back memories, actually nightmares, of the time my Land Rover slid off the horribly muddy and slick road into the muck, hopelessly miring us in a sea of slimy mud that even the local farmer refused to help us for fear of getting his tractor stuck. It took the help of another vehicle from FAME, lifting and digging out each wheel at a time and then supporting them with rocks. The other vehicle couldn’t even get close for fear of becoming stuck itself, so it eventually pulled from afar and we were freed after several hours. Not one of my finer moments driving in Africa as the clinic we were heading to had to be cancelled. It was very disappointing for everyone.

Meanwhile, we were finally able to navigate this bouncy road and make it to Manyara and the gallery, only to learn that it had closed for the afternoon as all the employees were attending the funeral of a prior employee. How disappointed everyone was after having left Upper Kitete early only to find the shop closed, but it was clearly for a good cause as funerals here are a very big affair as they a time for all those to show respect to the departed and to the family. As we drove home from the gallery, we came upon many, many cars parked on the roadside at one spot with markers in the road warning drivers to slow down. There were many hundreds of people there and this was clearly the funeral that had closed the gallery. The funeral typically goes on for three days and is a huge and important affair with the host family arranging to feed all of the guests during that time.