You would think that just traveling to Africa would be enough of an adventure in itself, but for this trip, Kilimanjaro International Airport and customs managed to provide a bit more angst than they have in the past.

I had arrived a day in advance of Nan, Jamie and Chris and had sailed right through customs with nary a thought by the customs people. In the past, not everyone even had to travel through the “to declare” line for customs, but now everyone must travel through it as there is no other way to walk out of the airport. This is the new Tanzania, since Magufuli took office about a year ago and now there are new taxes, or really just old ones that are now being enforced, that everyone must pay. It has created some significant issues in the tourist industry as a new 18% tax has been imposed on all safari travelers that can add up to quite a bit of money when considering the cost of safari here. In reality, these were taxes that had always existed and though it had certainly been nice not to have to pay them, it was something that was bound to catch up with advancements in the country which we are all looking forward to. The big question, of course, will be to see where these new found funds are going and whether they are really going to be used to bring the country into the 21st century and on par with some of their neighbors. One must always remember that this is Africa and change can be painstakingly slow here. 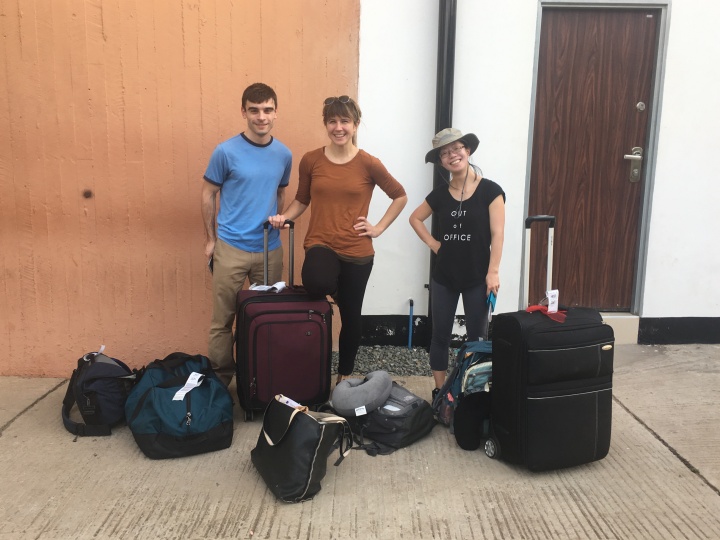 So with all this in mind, enter my three naive residents who, in addition to their own luggage, are each schlepping a huge roller duffel supplied by me packed with old towels and new bed linens for our new house at FAME along with a ton of baby clothes from Target that I am bringing over for Pendo and Leonard. Naive residents meet the Tanzanian customs officials now charged with their new orders to make sure simply nothing gets into the country that could otherwise be bought here, hence a loss to their economy, without charging a hefty duty. I had been waiting outside with Yusef who had accompanied me as no one can walk into the luggage area except for passengers. I knew the three had arrived as I they had waved to me from inside, but then they disappeared into the customs area and were simply not be seen again for some time. Since I had packed everything for them, I knew they would have a tough time going through everything with the officials and, besides, it wasn’t something that they should have been expected to have to do anyways. I had asked the guard at the door if I could walk in several times, and though he initially wasn’t interested at all in hearing from me, he eventually relented and let me pass as it was obvious there was little in the way of progress up to that point.

When I finally got to the benches where the three duffels were along with Nan, Jamie and Chris, who were each holding their own with the customs “agents,” but were certainly no match as it was clear that we weren’t getting through without some type of duty imposed on us. They were taking a count of everything we had in the duffels which was really pretty comical as in addition to the baby clothes, shoes, and new bed linens, there were a gazillion old towels that had come from my house and had been collected over thirty years. She asked me how many towels were there and after a somewhat dumbfounded pause, I gave her a ridiculously low number and moved on to the next duffel. I followed the same pattern for the rest of the items and they seemed satisfied that we were at least going to pay something. Then it came to values for each item. How do you value old towels? I think they may have actually intended for me to give them the value to buy a new towel (which we now didn’t have to do since we had brought in the old one and, therefore, a loss to the Tanzanian economy, hence the duty), but I gave her the value of $1 each and left it at that. She seemed to be satisfied with that (perhaps that’s what it would have cost here, though for a far inferior product that would never has lasted as long) and we moved along through the remainder of the items.

It was terribly hot inside the airport and we had now been detained for over an hour, so I sent everyone out into the fresh air and remained with the customs people to finish sorting out the mess that had been created. There were others now in the office with me – one poor Norwegian youth who had come in with a number of tubes of chewing tobacco from his home country now wishing he hadn’t and a businessman bringing parts for a machine already in the country now finding out they wanted additional duty. She painstakingly put each of our items into the computer with a deliberate hunt and peck then mouse motion that seemed to take an eternity and finally handed me the tally for all of our “indiscretions.” Thankfully, it was well within our means, and to be honest, it helped to understand the rationale behind this often bureaucratic nightmare. It was all very cordial and when were finally done, I thanked everyone with a smile and we were finally on our way. Had we taken it any other way it would have merely served to lessen our wonderful experience here and that would have been a loss. This is Africa, after all, and one must always be prepared for life to take a different path. That’s what makes it so special here.