Preparing for a month away from home may seem like a chore, but these days it has become so routine for me that it’s really as if I’m leaving for a weekend. The only clue that it’s a slightly longer hiatus may be the two fifty-pound duffels that accompany me on every trip to carry those items that friends and family there have requested me to bring for them. With the completion of the Raynes House, though, much of the space has been taken up with bed sheets and towels, expensive and of poor quality in Tanzania. That and lots of refurbished Apple computers and iPads for the clinic and a new network they are finishing there. I’m arriving a day in advance of the residents this visit and will greet them at Kilimanjaro International Airport on Tuesday after their marathon flights from the US.

But today, even as I am traveling thousands of miles and many time zones away, my thoughts are so much closer to home. 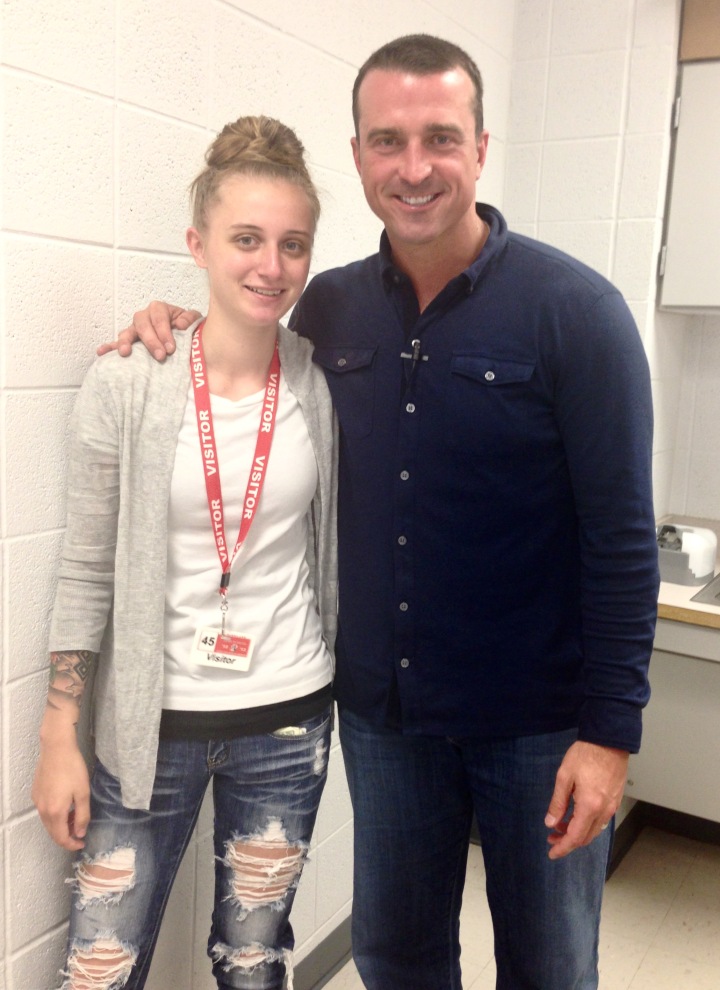 Chris Heron and Brittney at a later meeting

Today is Sunday and yesterday I attended a viewing for a courageous young friend who finally lost her battle to addiction. Brittney Sulat was perhaps the most amazing twenty-year-old person I have known and was wise far beyond her years, an unusual trait for addicts who typically stop maturing when they begin using. Brittney began when she was seven and within several years, had graduated from marijuana to shooting heroin, so often the journey for those with this disease. As I’m sure many of you know, my son,Daniel, is in recovery, and it was through this connection that we all met Brittney one night back in 2012. It was then that she stood up to ask for help in front of a packed auditorium who had just listened to Chris Heron tell his story of addiction and recovery. She looked so tiny that night standing at the microphone, her soft voice penetrating every heart string in the audience, and most of all, Chris Heron’s, for after the talk he immediately took her off stage postponing the autograph seekers who had come to hear his talk. Having never really had clean time before, it was then that Brittney embarked on her amazing road to recovery, and more importantly, her need to help others with the same affliction.

Brittney and her best friend, Erika

It’s too simple to say that she was amazing, for she had a way about her that few others of any age have, and she used this to provide service to so many others time and time again. I recall returning from one of my Africa trips and going straight to the high school to attend a community forum on the heroin epidemic when a young woman raised her hand asking for help. Brittney was like a laser honing in immediately, taking this young woman, probably older than her, under her angel wing and finding her the help that she needed. This is what Brittney did, over and over again, and never with a hint of anything but pure gratitude merely for being able to do it. She spent time at Caron, the rehab center where my son went, and won everyone’s heart along the way, especially Father Bill’s. Despite several relapses, she was still the shining star that everyone looked to when in need of comfort or reassurance.

Brittney finally succumbed to the demons that have been chasing her for so many years. It wasn’t for a lack of purpose or an absence of willpower, though, for she had more of each of these than anyone could ever have imagined. It was simply the disease. And even more importantly, it is a message to us all that our work to overcome this illness is never ending, and that no matter how safe you may feel, it will do anything to find a way back to do what it does best, to kill and destroy. And that even the strongest are at it’s mercy, for there was no one stronger than Brittney. We can only take solace in knowing that she is now at peace, but we have been robbed of one of the brightest stars in the sky and the world will be less for it. She was so much to so many, and though we still have her memory, we don’t have her wry smile and her incredible wit any longer. I will always be grateful for having known her, but right now her loss weighs heavily on us all.