Hopefully, some of you may recall the 1969 mediocre comedy with Suzanne Pleshette, “If It’s Tuesday, This Must Be Belgium,” about a tour guide taking American tourists across Europe. Of course, I’m probably dating myself, but this movie did infuse itself into our vernacular for those of us from that era and became an appropriate phrase to suggest that one was in a different location each day of the week. Our mobile week is just such a situation, in which we travel to a different location on each day of the week, so it can be a bit disorienting trying to remember exactly where you are.

Mindy delivering her lecture on headaches

Parked at our mobile clinic

Since it was Tuesday, though, we had another educational lecture to give to the doctors and clinical officers here. Mindy delivered an exceptional lecture on headache emergencies that was case based and built on some previous lectures they had been given by other residents. As Mindy deftly referred to her lecture, it was about patients presenting with headache who shouldn’t be sent home on amitriptyline. Any resident who has worked here with me would easily understand the reference as this is probably the most common medication we prescribe here, most often for headache, and its sister medication, nortriptyline, is one of the most common medications we prescribe for headache in the US. Her lecture was very concise and held everyone’s attention throughout.

Susan and Susanna setting up shop in Qaru

Today, we were traveling to the village of Qaru, which is south of Karatu in the direction of the Haydom Hospital, but only about an hour away instead of three. Following our adventure in the Ngorongoro Conservation Area on Sunday, our Land Cruiser had some necessary repairs, namely reinstalling the rear driveshaft, or propeller shaft as it is known here, and replacing the center bearing that had to be shipped from Arusha. It was unrealistic to think that this could have actually been done overnight, though Soja, who does all the maintenance on the FAME vehicles, had tried his best to accomplish this. He had almost come through, but, in the end, needed to test drive the car and wouldn’t have it ready until nearly noon which would put us too far behind on our itinerary. So, we borrowed the FAME stretch Land Rover once again, though that is a bit of a hassle here as that vehicle is used to shuttle staff at the beginning the end of the day. Omari was once again going to drive us, for as much as driving here is one of the great pleasures in life for me (those of you who know me are well aware of this), I have also come to realize that the FAME drivers are quite equipped to manage any mechanical breakdowns that may occur and would otherwise endanger the entire mobile clinic mission if we weren’t able to reach or destination. For this reason, I am willing to sacrifice my time behind the wheel and sit in the back of the vehicle to be driven. I have become more tolerant of not being in total control and it has been a good exercise for me. 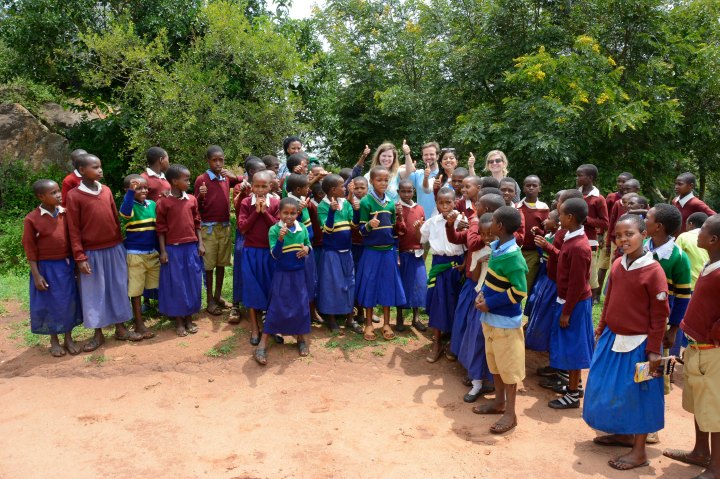 School children with the neuro team

Qaru is a very small village, one of many other nondescript villages along this main thoroughfare that travels from Karatu heading south through somewhat less fertile land than we saw yesterday in the Mbulumbulu region, but is still covered with crops everywhere. This region is also primarily Iraqw, who are farmers, as opposed to the Maasai, who are livestock herders. As we reach the center of Qaru, we turn left and follow the signs to the dispensary where we will be holding our neurology clinic for today only. Unfortunately, because of the vehicle problems (my Land Cruiser being in the shop and having to wait for the Land Rover stretch) we are well over an hour late and those patients who were waiting here have gone home for lunch and will be back shortly. 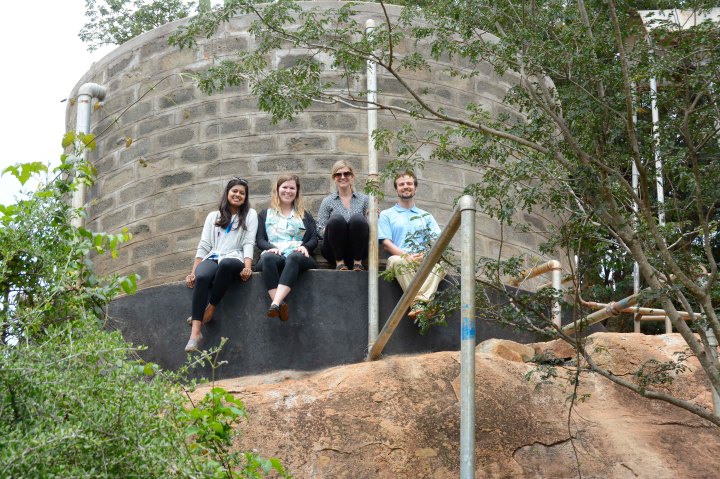 New heights for the residents. The water tower at Qaru

It was break time for the school students, of which there were probably 100 or so, and they seemed to be having a blast at the water tank that sits up on a rock and had been opened to irrigate some banana trees nearby. A number of the children had climbed high onto the rock to play with the water coming out and every time I pointed my camera at them to take a photo, they tried to duck behind the tank as if I were somehow going to turn them in to the authorities. I think they eventually realized that that wasn’t the case and relaxed a bit, though by then, recess was almost over and they all began to gather up to head back to class. We got a few photos with the group of them and now they were all extremely excited to be in the front and have their photo taken. Since our patients hadn’t yet shown up, it was decided that we would have lunch, but there was some wonderful gospel music coming from the other side of the church where I found a small group of a cappella church singers rehearing a song. It was so nice to just sit and listen to their wonderful voices as they seemed to have absolutely no concern about me being there and even offered, “karibu,” or “welcome,” on several occasions to make certain that I knew I was welcome. It was truly a lovely moment to be a part of something so meaningful to them.

We eventually had our patients show up for clinic and there were several very good neurology patients along with some children for Susan to see. One young girl named “Brightness” came with her mother and she absolutely lived up to her name as she was a very bright and interactive child, though who had been having many frequent seizures for at least several years, but was otherwise totally intact neurologically. It was rather exceptional that she was so intact having had seizures for so long, but the description of the episodes was quite convincing for seizure and she had responded briefly to phenobarbital that had controlled her seizures quite well, but her family had run out of the medication at some point. Her seizures were suggestive of localization related epilepsy and carbamazepine would have been a good medication for her, but she was under two years of age and we don’t usually use it that young. It was a decision we had to make, so decided to put her back on the phenobarb until we are back in October and encouraged them to come back to clinic so that we could re-evaluate her. It was just too risky to put her on the carbamazepine now as there would be little help is something wasn’t going as expected and we just needed to have a few more months of majority under her belt. 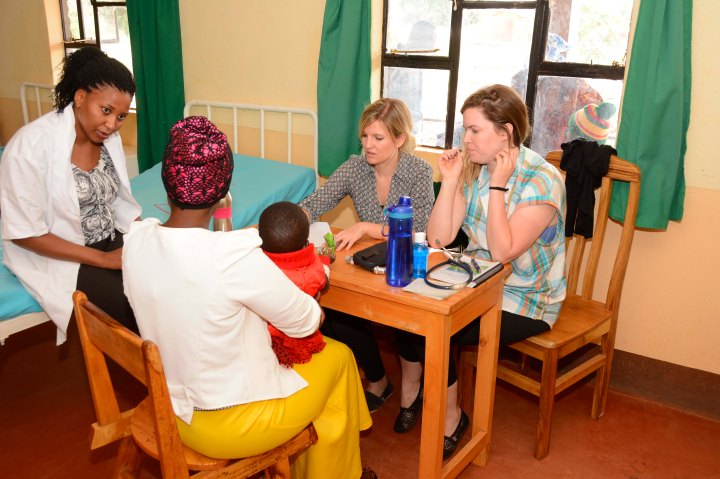 Our patient before being seen

A very interesting patient who returned to see us this time was a young girl who is now seven-years-old and who we had first seen in October when Sara had evaluated her at that time. She was very clearly developmentally delayed, but had a significant loss of trucal tone such that she was unable to walk, or even stand. She scoots across the ground on her haunches with her legs bent underneath her and can attempt to pull herself up on furniture, but isn’t able to do very much once she does get up on her feet. She looks ataxic, but really has no other significant cerebellar findings and has been fairly static since an infant without any real progression. We feel fairly strongly that she primarily has some form of a birth injury given her delay along with the fact that she hasn’t progressed, and we’d love to see a CT scan of her brain, but it would really serve any purpose most likely doesn’t have anything we could really treat regardless. 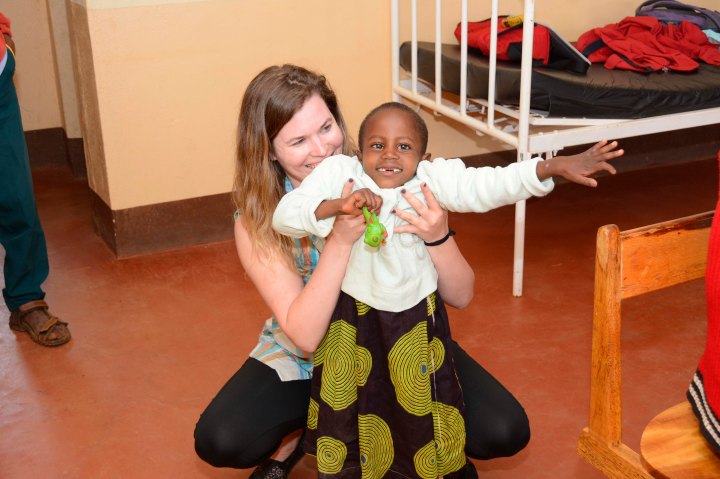 Our last patients of day were two tough cases for very different reasons. One was an elderly gentleman who had been recently treated (though not for long enough) for brucellosis and now came in with numerous symptoms along with findings on exam that were very concerning for neurobrucellosis, especially given his prior inadequate treatment with antibiotics. He had significant finding on examination that included cranial nerve deficits papilledema that were very objective and given his history, we were quite concerned about him. He was told that he should come to FAME where we could do a thorough evaluation that should include a CT scan and a lumbar puncture, the former test to be done both for diagnostic reasons as well as to make sure it would be safe for us to tap him given the papilledema and focal findings on his examination. He said that he would need to go home to discuss it with his family first, which often means you won’t see them again, and then was promptly hoisted onto the back of a motorcycle with his family member behind him to be transported home. He disparately needed to come in the hospital, and though we all hoped that we would see him again, I knew from past experience that it would be a less than 50% chance that we would. 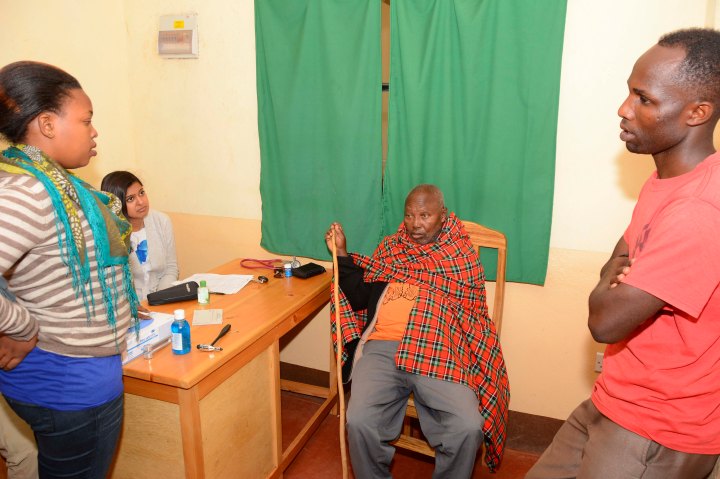 Angel helping us with an elderly patient 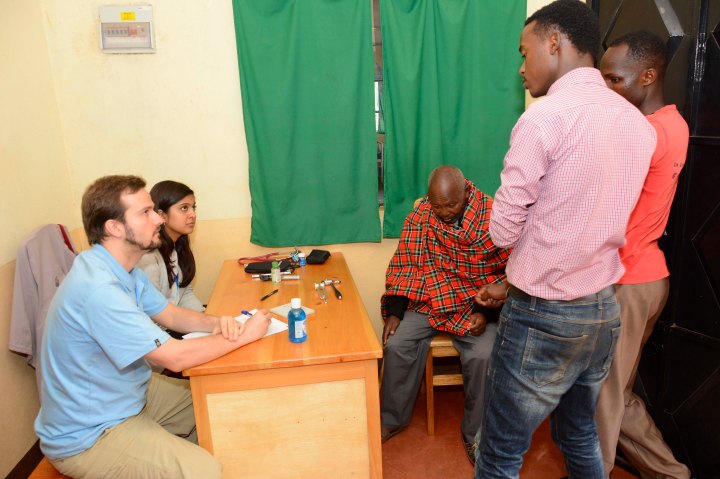 Johannes and Mindy evaluating a patient with Baraka

The other last patient wasn’t difficult for medical reasons, but more for social reasons. He had a history of a seizure disorder that hadn’t really be treated as his parents hadn’t allowed him to see a doctor, and, in fact, were unaware that he was even seeing us this day. He had been brought in to see us by an aunt or a next door neighbor, we weren’t quite certain which, and he needed medications. It was unclear to us whether he would be able to stay on medications as his parents weren’t in favor of them, but he was really old enough to make these decisions himself. It was another case of treating a patient in the short term and being hopeful that they would continue treatment in the long term as well.

Mindy demonstrating during her examination

We left Qaru that day at least with some satisfaction that we had seen excellent neurological cases that could benefit from our expertise, though in the end, it wasn’t entirely clear to each of us how much we had truly been able to impact the life of our patients. Dr. Jackie was working with us, though, so we knew that these were great teaching cases so that in the future she would be able to recognize and treat these disorders effectively. In the end, that’s often the very best that we can do. 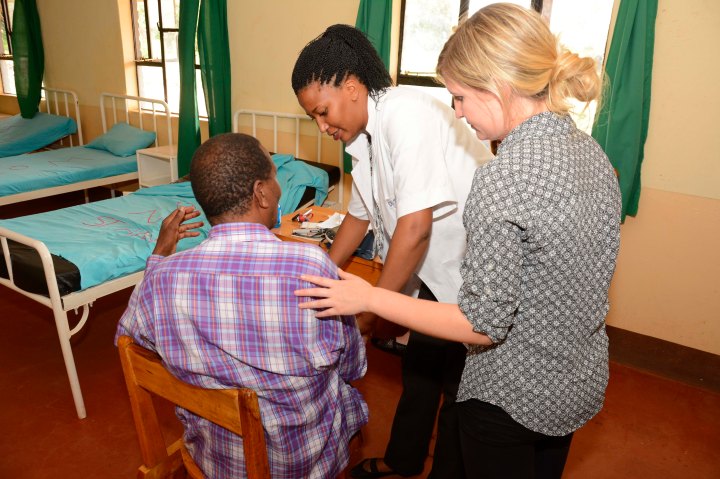 Susanna working with Dr. Jackie on her exam

We arrived home a bit late again, but early enough to run into town where everyone could shop for fabrics that they would have clothing made from as the fabrics here are so colorful and unique. Susanna didn’t partake, but even Johannes decided to make a foray into the experience by ordering some clothes for himself. We finally arrived home that night, quite tired and ready to crash. We had dinner and each worked on our various projects with the residents continuing to enter patient data into our databases that are for our own use to know what types of neurological disorders we are treating here along with an epilepsy database to determine whether we have ultimately made an impact here in the treatment of this disorder that is very manageable as long as it’s recognized for what it is.