As it was Tuesday, our day began with an educational lecture and, today, it was Whitley’s turn to give a talk. She had chosen to talk about epilepsy with a focus on treatment and had also included information on available dosages as well as cost of medications which is such an important factor here. The cost of the anti-epileptic drugs (AEDs) varies widely from phenobarbital, carbamazepine and phenytoin being the least expensive, costing perhaps less than $4/month for an average dose to medications such as levetiracetam (Keppra) costing 1500 TSh (approximately $0.70) per 500 mg tablet. That would equate to a monthly cost of $42 for a low dose of 500 mg twice daily up to $84 for a frequently prescribed dose of 1000 mg twice daily. 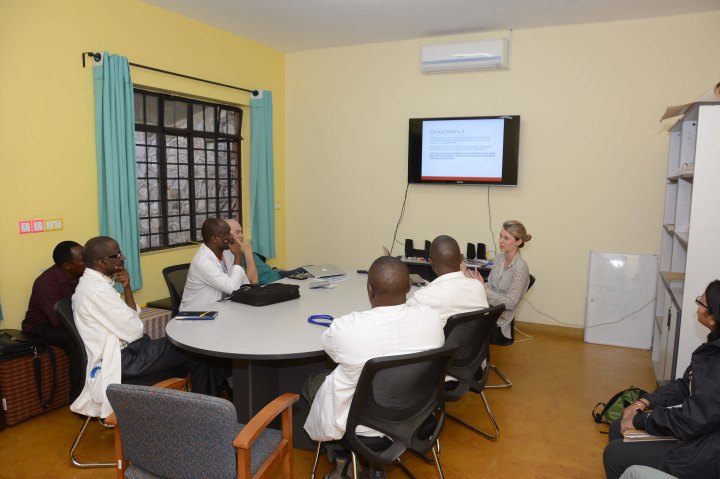 Whitley giving her lecture on epilepsy

Levetiracetam is a medication that is used quite frequently in the US, as it is a wide-spectrum medication that treats many different types of epilepsy, is well tolerated, is easily titrated and is relatively safe for pregnancy. It was unavailable here for the longest time and now that it is, we have to consider the cost, as it is out of the reach of many, if not all, families here where annual average income may be less than several hundred dollars for them. Making a great diagnosis and then placing the patient on medication that completely controls their epilepsy is pointless if they return in one month to refill their prescription, but cannot afford to do so. Our plan has always been to help subsidize the cost of medication for families that can’t afford them, but we haven’t managed to make this fully operational just yet. When we prescribe one of the more costly medications for a patient now we have our social worker meet with them to assess their ability to pay for meds in between our visits. 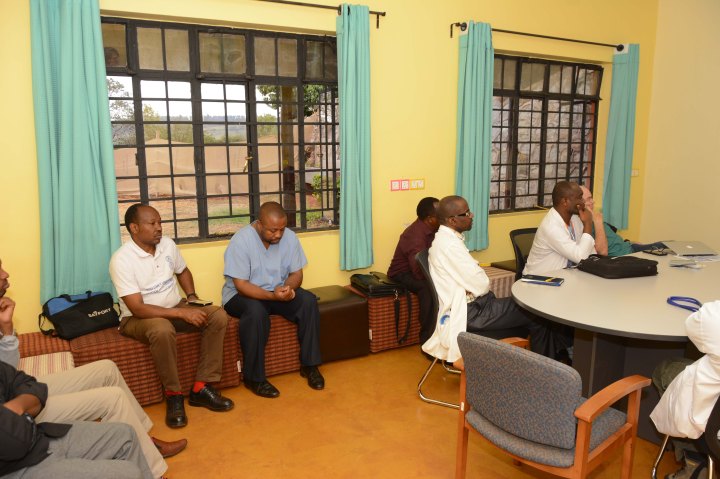 More of the doctors attending the lecture

Susan, co-founder of FAME with Frank, was there for the lecture and was so happy to see that Whitley had included this information on cost, as this has always been an ongoing battle here. Sensitivity to the cost of treatment is certainly one of the big lessons here and has to be considered not only when prescribing, but also when considering ordering tests that will only discover a condition that one is unable to treat due to the cost or lack of availability here in country. This is only one of the many lessons we learn here that can also apply to how we practice back home. 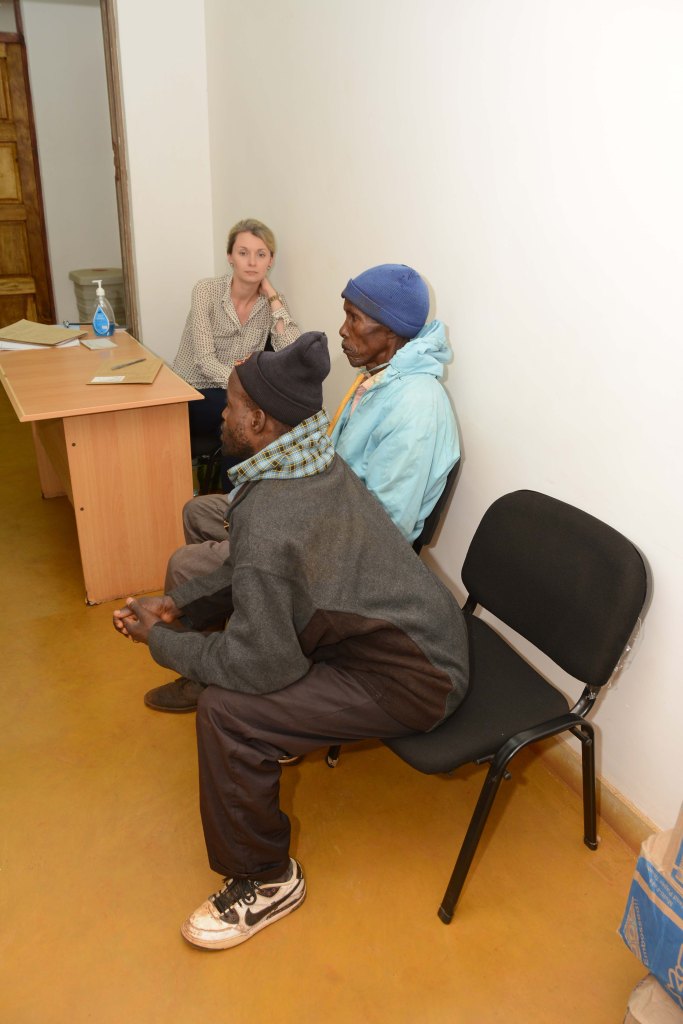 After Whitley’s lecture, it was time for morning report and there was good news on our young patient with tetanus as he had very few spasms overnight and the medication regimen that Neena had recommended was working quite well for his symptoms. Our hope was that he would be able to be discharged as long as he was still well controlled on oral medications that hadn’t yet been tried and would be shortly. Following morning report, we got down to the business of seeing outpatients, again working with both Emmanuel and Baraka as interpreters while Dr. Ivan was going to spend the day with us again as well. 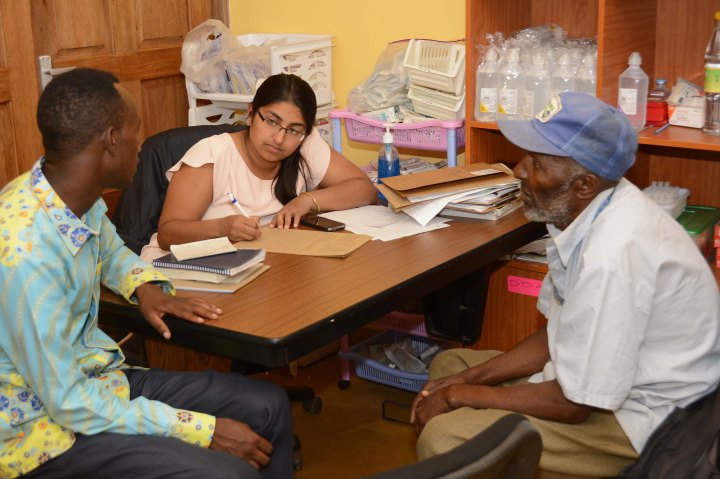 Neena and Emmanuel evaluating a patient

Several children had again been brought by the volunteers from the school for impaired children south of town near Qaru. One interesting case in particular was a young boy with developmental delay and fairly obvious macrocephaly. They had been seen elsewhere and were told that there was nothing wrong, but regardless of whether there was anything to do or not, the boy clearly wasn’t normal. He was three years old and the issue we were confronted with was whether there was any reason at all to image him to decide whether he had significant hydrocephalus or not. We certainly were curious as to whether this was the case, but if we weren’t sure that we would recommend shunting if we found hydrocephalus at this age, then there was no reason to send him off for the study. 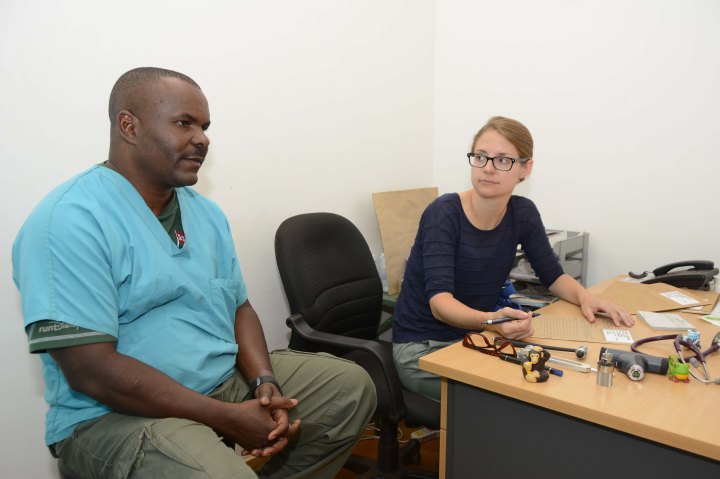 Sara and Dr. Ivan working together

It was a tough decision and neither Sara nor I knew the right answer, so she consulted with one of the attending neurosurgeons at CHOP for his opinion. We had our answer very shortly thereafter that even though it would have been best to have performed a shunt much earlier in life, we really couldn’t rule out that if he did have hydrocephalus (which both of us felt strongly he did) that it wasn’t playing a role in his developmental delay. Essentially, if he did have hydrocephalus on the CT, we would recommend having a shunt placed that could potentially help him. Since we were leaving in a few days, we would give the information to Dr. Gabriel whom we knew would follow up on it with the school and family. 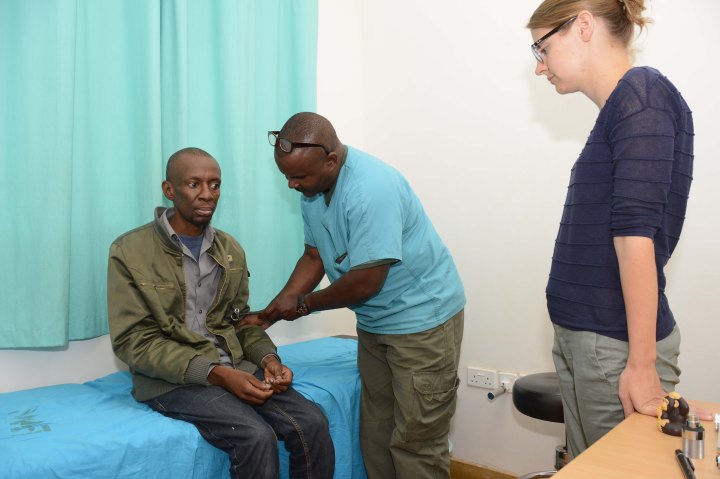 Since today was the second of our resident wellness (half) days, we worked until lunchtime and by popular vote, it was decided that we would head back up to Gibbs Farm for our final visit of the trip to experience their amazing lunch buffet. As I’ve mentioned before, this is something that should not be missed if you are ever volunteering at FAME, or just simply passing through. I am not exaggerating when I tell you that there are probably 25 different salads and entrees that are all amazingly delicious and all are tremendously fresh and local grown. And there is the soup. Soups in Tanzania are something to behold and they are a staple at every meal, especially at the lodges and when on safari in the tented camps. Today’s soup was a ginger carrot that was thick and tasty. We all had seconds (and some had thirds – read Alex and Ke) and then it was finally time for desert. 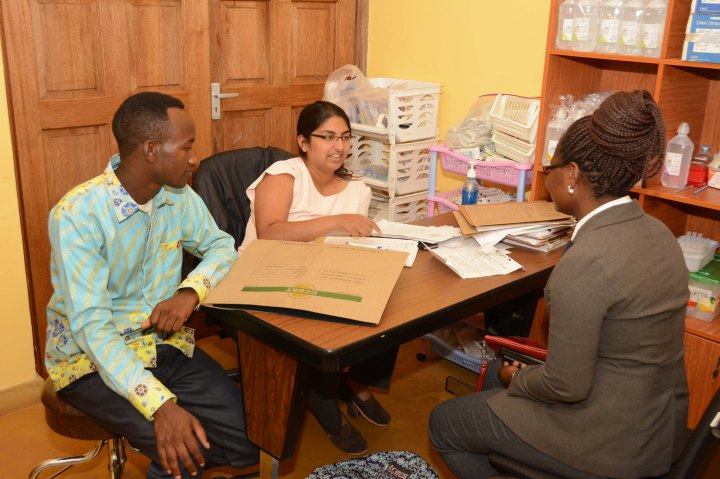 Neena and Emmanuel obtaining a history

At the last lunch they had something called “self-saucing chocolate cake” that was to die for if you are a chocolate lover and even if you are not. It is essentially what we call a lava cake and we were all hoping that they would not let us down and would have it again. They did, and it was the highlight of the desert table along with the delightful and light white chocolate mousse. I won’t rat on who liked these most of all or had seconds of desert, but leave it say that there were several chocolate lovers in the group who were in chocolate heaven. 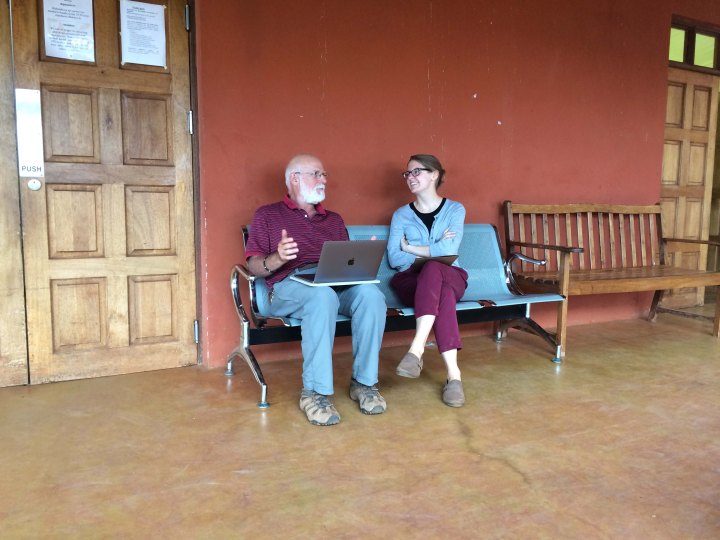 Sara staffing a patient with me in my outside “office”

It was once again an incredibly relaxing time and the perfect wellness day for the residents as well as those of us who accompanied them to this affair. I have no doubt that the ACGME would have wholeheartedly approved of this use of the day. Before we knew, it was already 4pm and time to run into town as I had mentioned that we could go to a fabric store to have some things made and everyone was very excited to do so. This can always be a tricky proposition as most of the women working in the fabric stores speak no English and trying to convey what you would like made can often be difficult with lots of sign language. Bringing along someone from FAME to help us is essential so we had asked Selina in advance if we could pick her up before heading downtown to shop. It was almost the end of her shift, but she definitely made sure that I cleared her coming with us and leaving a few minutes early with all her supervisors. Once down, we were back on our way downtown in search of the proper fabric store. Since we were also leaving on Friday morning we had to make sure that anything they ordered would be done in time.

I dropped everyone off in the center of town while I headed off to do some errands (fuel for the vehicle, convert some money and get more airtime for my phone), planning to meet them back in the same area. When I had returned, I didn’t have far to search, as the shop they had found was no more than ten steps away from where I had dropped them, and all three were there with Selina selecting fabric and ordering things to be made. Once finished, and making certain that everything would be done in time, we left town and headed back home to the Raynes House. Susan had invited everyone to their house (which sits just about the volunteer houses) for drinks and socializing after work along with some appetizers of samosas, popcorn, and cheese and crackers. We were all stuffed from our lunch, but most of managed to partake in some of the food as it was all delicious.  The following day was Wednesday, which is the night that all the expats in town meet at the local pub, so we knew that we would be out late for that and decided to get some sleep.

One thought on “October 24, 2017 – More neuro clinic and another afternoon resident wellness day….”