Our Wednesday began with morning report where we learned that one of our patients had passed away the night before. She was a lovely 92-year-old Bebe who was of European descent and had lived her entire life in Tanzania. We were initially asked to see her for the benign diagnosis of restless legs syndrome and had discovered that she also had diabetes and neuropathy, but neither of those were necessarily a significant problem for her. She was discharged with her family earlier in the week and had returned after only a day with severe abdominal pain. Her ultrasound looked like it was her gall bladder, but she slowly decompensated through the night and passed away quietly and comfortably. Her family returned the following day to retrieve her and though the loss was great, all were comforted by the grace of her life and her restful end. Jess and Jackie had been the ones to evaluate her and were both touched by her.

Jess demonstrating her exam for the patient

Our GBS patient was also a topic of discussion at morning report and I had wanted another set of eyes on her before we decided further management decisions. I had asked both Jess and Jackie to evaluate her and to give me their thoughts regarding her case as she didn’t have the most cooperative exam and the diagnosis was a pure clinical one. They both agreed with my diagnosis, which is always reassuring in this setting, and we decided it would be best to keep her for another night to make sure was stable and not progressing. Developing respiratory failure anywhere in Africa is a bit of a challenge to one’s survival, but doing so in the bush would not have been wise on an entirely different level.

Jackie evaluating a young woman with seizures and delay

Overall, our morning seemed to be slightly slower than the previous two days, though we had a number of patients who had been left over that were coming back to be seen. Jess had several interesting stroke patients, including one man who had suffered a hypertensive subcortical hemorrhage and returned with his CT scans, and who also had a rhythmic movement of his thumb that either represented tremor or EPC (epilepsia partialis continua). The concern was that the movement persisted in his sleep which would go more along with EPC and if this was the case, he needed to be on an anticonvulsant. Though his hemorrhage was primarily subcortical and shouldn’t cause him to have seizures, the scan was several years old and so we decided to place him on an empiric trial of an anticonvulsant to see if the movement would stop. An EEG would have been reasonable to get in this case, but our machine is unfortunately still down with technical problems. 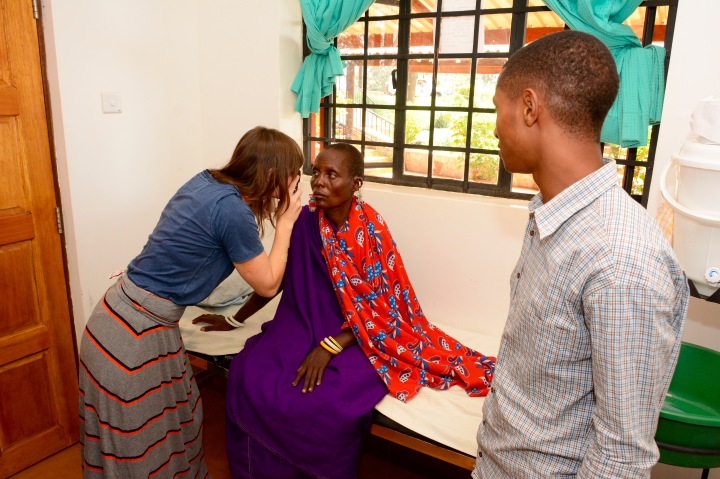 Jess and Daniel evaluating a Maasai woman with headache

We continued to keep Jackie happy with a good number of pediatric cases and, of course, a smattering of adult cases for her. She had several good cases, one of a very cachectic young women who had seizures for her entire life that hadn’t been treated and looked to have some either infectious or metabolic cause, but alas none was found despite numerous labs. Another Masaai boy had a history consistent with Lennox-Gaustaut syndrome, an unfortunate diagnosis with multiple seizure types and progressive functional decline. Interestingly, Jackie had also seen a number of cases of infantile spasms here and though it’s not a rare condition in the US, it seems we see it more often here perhaps secondary to serious childhood infections or trauma.

We had been doing rather well keeping on schedule for our morning session and didn’t have a tremendous number of charts for the afternoon. As soon as we got back to the office, though, we had a patient wheeled in who had apparently collapsed. We see quite a bit of what is best termed “swooning” here and which is most often seen in adolescent and young women. There is certainly nothing sexist in that observation and I believe those numbers would hold true back home as well. This was a young woman who was unresponsive in a wheelchair and had to be lifted onto the ER gurney where she very quickly began to respond to Jackie who was evaluating her. She complained of a rapid heart rate and had apparently had these episodes before as her mother reported that they had been told she had an abnormal echocardiogram in the past. We checked her BP and as we stood her up to check her pressure, she promptly “swooned” again, with normal BP, or course, and awakened as we laid her back on the gurney. It was quite clear that her episodes weren’t real, but we were stuck with where to put her until she was stable as we needed to get on seeing patients. So we put her in a ward bed for observation. What happened next was actually quite predictable. Within 15 or 20 minutes, someone came running from the ward to tell us that she was having a seizure. Jackie and I both knew what was going on and quickly walked to the ward, not because either of us was worried about the patient, but rather we wanted to make sure we both saw what she was doing. Sure enough, she was having a very classic non-epileptic event, or what we used to call a pseudo seizure. This is an event that is an event that is often part of a conversion disorder and is subconscious, or can be factitious in nature. Either way, though, it does not require any medication and after more thorough questioning regarding a possible recent traumatic event or underlying stress that may be causing it, the patient is told this is often the bodies repose to stress and she was discharged to home to the care of her mother.

One of Jess’ stroke patients

We ended up finishing our clinic at a decent time which was good since we had planned to visit with Daniel Tewa and his family again that night. It was a great ending to a very interesting day. Daniel filled us in on all of the world news we had been missing since being away and again amazed each of us with his understanding of world politics that seemed far beyond that of any one of us. When he mentioned the name of the French foreign minister, Pauline was more than impressed as was I considering I couldn’t even recall the name of the President of France at the moment. Daniel’s family was as gracious as ever and it was so good to see them again and spend time in their home. It was another gorgeous night in East Africa with a sky full of sparkling stars so vastly different from those at home reminding us how fortunate each of us is to be in such an exotic land.