I woke with the anticipation of a big day ahead for a number of reasons. It was our last clinic day for FAME and I knew that we still had many patients to see. We had no room for error as the two following days we were scheduled to be at the Rift Valley Children’s Village. There was also a surprise party at lunch for Brad Snyder, the totally awesome nurse practitioner who has been at FAME for over a year after having spent time in Rwanda prior to that, and would be leaving FAME at the end of this month. The big event for me, though, was that we were breaking ground for our volunteer home, the Raynes House, sometime this morning.

The day began with Jackie giving her seizure recognition lecture to the nurses again as not everyone had been able to hear it the first time. There were far fewer nurses, though, as I think many of them had wanted to hear it the first time and so it was a much quieter crowd as often happens with the very polite Tanzanians who tend to ask fewer questions when not fully engaged. It is always a struggle to get your lecture just right for the group attending. The prior week, there were plenty of questions. This time far less. 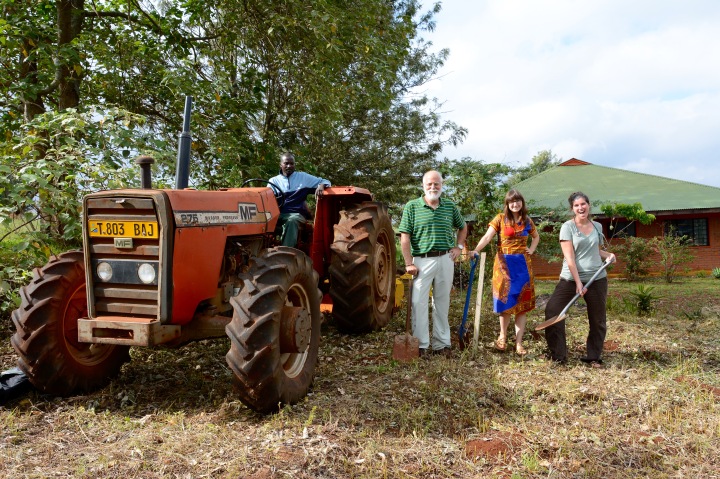 Ema, Me, Jess and Jackie posing with the FAME tractor 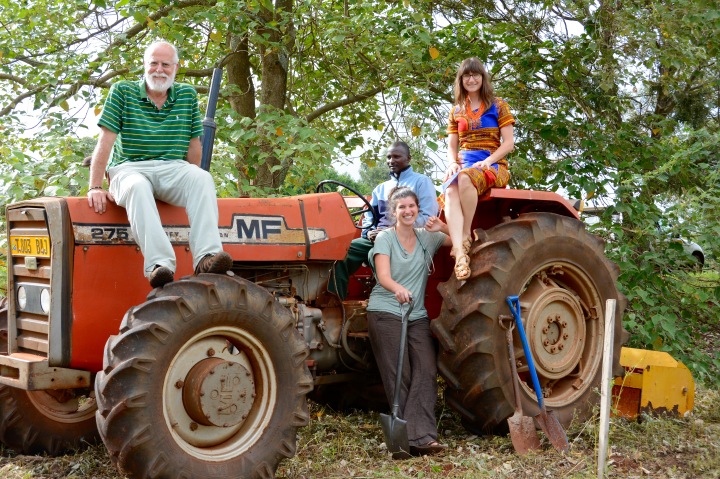 And yet another pose….

We had planned to meet for our groundbreaking at 8:30 am right after morning report, but one of the FAME staff members had come in with a problem that required my assessment so we were a bit delayed. We also had to see our Guillian-Barre patient on the ward and made the decision to discharge her as she had been stable for 48 hours with no progression. Only half an hour late, we all gathered at the site for our new volunteer house – many of the workman as well as much of the staff and volunteers – along with the FAME tractor pulling a blade to take the first swipes at leveling the grade to accept the new foundation. Before the tractor began it’s work, we took a few photographs that included more traditional shots of us with shovels.

Nancy, our Architect/Nurse, and Moshe, FAME’s Project Manager for all new construction

Ema taking the first swipe with the tractor

It was a really incredible moment for me as it was a dream come true and was all made possible by the generosity of Stephen Raynes and his family who have followed my work at FAME from the beginning and have shared my vision for what can be accomplished with compassion and good intentions. The house will not only allow the expansion of our neurology program, but also open the door for other specialties from Penn to begin exploring the development of similar programs. 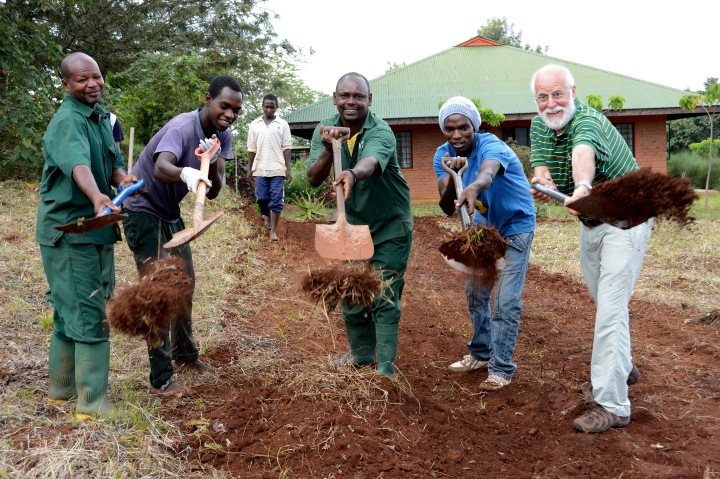 Joining in for a ceremonial toss of dirt

Jackie and Jess began their morning patients for our last clinic at FAME. I think Jackie had at least one additional infantile spasm patient that day, having seen several spread out over the previous clinic days. Typically a very devastating syndrome with a very poor prognosis, the best that can be hoped for is some control of their seizures that is most often incomplete. I’ve diagnosed several cases in the past and have also diagnosed a number of Lennox-Gastaut patients, a syndrome that can develop from infantile spasms. Though there are no cures for these conditions, there can be therapies that improve quality of life and it is those that we seek to provide for these children and adolescents. 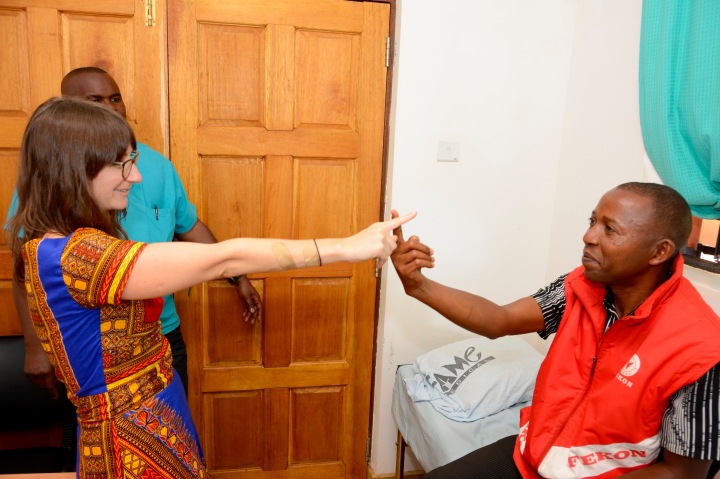 And back to work examing patients. Jess and Dr. Ivan 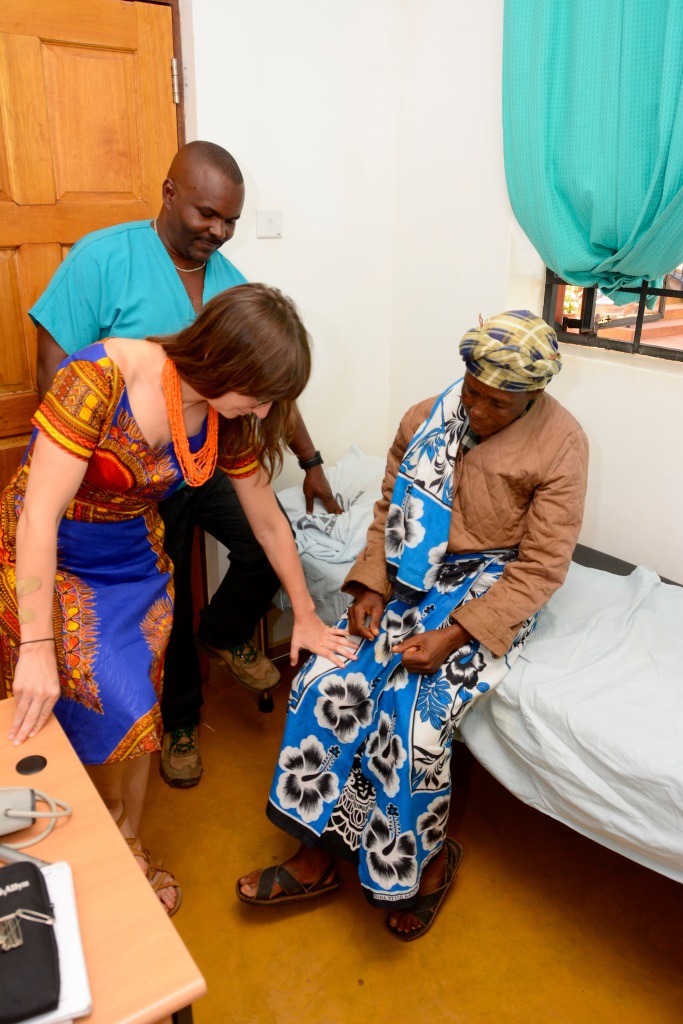 Jess examining a patient with Dr. Ivan looking on

We continued to work through the morning becoming more and more hungry for the special lunch planned for the day that was apparently taking more time than the typical rice and beans that we get most every day. Don’t get me wrong, though, as our normal lunch of rice and beans, along with “mchicha,” the spinach-like vegetable grown in the FAME gardens, is something that we all enjoy, perhaps as much as any lunch we have ever eaten. This was a special lunch that was being served and would have to outdo our favorite rice and beans, as we were celebrating Brad’s service to FAME and his leaving for the US and pursuing further education there. He has been an inspiration to all and a good friend to everyone. In addition to his clinical responsibilities and his role as director of nursing education, he has led frequent evening yoga sessions for the volunteers and anyone who wishes to join him, and has begun to practice acupuncture, an art far more complicated than something I’d ever take on. Brad has had the energy to accomplish all of this and still more and I know will be sorely missed at FAME. The lunch was amazing with huge portions of chicken, salad, fruit and more, but it was the wonderful ginger cake that made it special as he fed each of us a piece with a toothpick in the traditional fashion that I had down with my birthday cake.

After lunch, Jackie had a young girl seen with an odd complaint for us which was that her voice was very quiet and difficult to hear. It turned out that she had had a benign papilloma removed from her throat at Kilimanjaro Christian Medical Center in the fall and had been told that she should improve, but clearly wasn’t as her voice was indeed very difficult to hear and was a soft whisper at best. We had little to suggest other than returning to the ENT at KCMC who performed the surgery and seeing if he had any other suggestions. 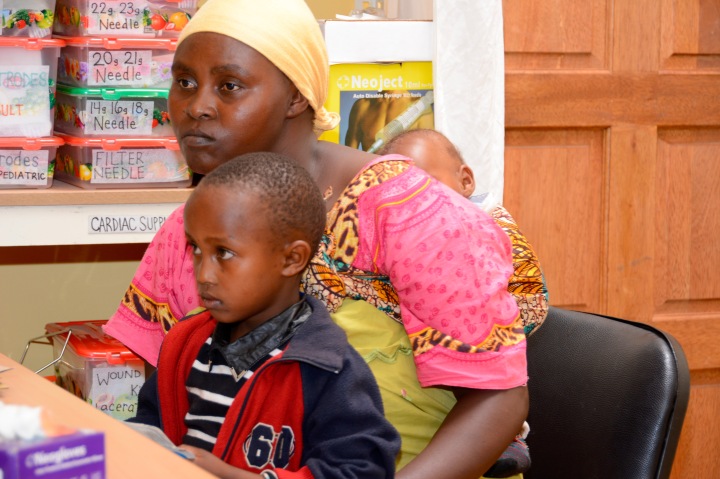 Our afternoon clinic continued despite our post-lunch lethargy from such a huge meal and the patients kept rolling in. Siana had sent me a request earlier to see two of her friends at the end of day as they hadn’t gotten there early enough to get a number to be seen that day and considering it was Siana, I couldn’t say no. Somehow the message didn’t get to everyone, though, and when I turned around, Jess and Jackie were in the ward seeing an interesting Maasai women with a very complicated history and we’re having Sokoine translate for them. I had suddenly lost everyone working with me, and had no way of seeing these two patients without a translator, so Siana sat in with us and I proceeded to see the two woman myself while the Maasai woman was being evaluated. Not the best situation as neither of the women had anything close to being urgent and it was quite late. I finally finished with them and joined everyone in the ward with the complicated patient who was quite young and we believe probably had a small stroke sometime in the past, but her history kept changing and her exam was difficult. We eventually decided that she needed an echocardiogram and wanted her on aspirin, but we have no capabilities to pursue laboratory studies to look for hypercoagulable conditions. In the end, the family decided they didn’t want to pursue the CT scan and her echocardiogram was negative, so she was referred to the government rehab facility at Monduli, where she can get physical therapy and her family can get instruction.

Our bread and butter, the reflex exam

Teaching Daniel how to explain the Jendrasik maneuver to a patient

We all finished very late indeed and we were all quite tired that evening as we returned to our houses for the night. Sometimes the exhaustion can be overwhelming and our brains a bit fried after days like this, but the beauty of Karatu and Tanzania with the gorgeous sunsets and the green hills in the distant light make it all worthwhile and we look forward to another day as our heads sink into our pillow. This is what we come for, and what I seek each and every time I return. And it is the excitement and wonder I see in the residents I bring and the Tanzanians that work with them that increases my satisfaction exponentially.