It typically slows down at the end of the week for us, but today was exceptionally quiet and we mainly saw a few follow up patients from Rift Valley that we had seen earlier in the week. These were patients that needed laboratory testing that we don’t have available there (though we used to run a portable lab, but more for medical issues) making it necessary for them to travel here. Thankfully, transportation for the villagers in the Oldeani area near RVCV is provided by the vehicles that are traveling from the children’s village to Karatu several times a day which is a huge benefit for them as they would otherwise have to walk miles to get to the main road and catch a bus. There are no buses that travel to that area for several reasons, but probably mostly the occasional condition of the road which can at times be nearly impassable. We had these patients get their blood work first and then did what was necessary based on the results. One young boy had an essential tremor who we had been seeing for several years, but had never had thyroid testing done that I just wanted to check to make certain that he wasn’t hyperthyroid. These tests are very expensive here, costing 20,000 TSh for each, which is about $8 and would be a bargain in the US by any definition, but are out often out the reach of patients here. Still, when providing these tests as part of the 5000 TSh cost of a neurology visit, you can imagine what it requires in support to run this program. Then, when you add in the cost of a month’s worth of medication, it can become even more costly. Some of the anticonvulsant medications that we use at the doses necessary for them to be therapeutic can become very costly indeed.

A panorama from my bike

Another patient that we saw in the morning was a gentleman who presented with numerous complaints that had accumulated during the pandemic, though had no clear underlying cause or unifying diagnosis. While telling us his story, or actually while telling the others his story as it was all in Kiswahili, it was quite clear to me, and I later found out to the others as well, that he was very depressed and that the symptoms he was complaining of were related to this rather than to any underlying physical ailment. His story continued for a very long time until I finally took the opportunity to step out with the others and explain that though I’m sure he had much to share, we were not therapists and that we could help the patient most by making a diagnosis and treating it appropriate. There was little question that the patient needed counseling, but he also needed an antidepressant medication in the short term at least. We eventually provided him with a prescription for fluoxetine, or Prozac, and explained that it was also very important for him to consider speaking with someone in the near future as well.

We hung around for much of the afternoon waiting to see if any other patients would show, but it remained quiet and I took the opportunity to catch up on some of my writing and emails. We were all planning to meet later that evening for a dinner of nyamachoma, or barbecued meat, that is served usually with French fries (chips) or fried plantains. The roasted beef, or sometimes goat, is incredibly tasty and is one of my favorite foods here. You order the meat by the kilogram and it is also served with hot sauce (pili pili) and salt to dip it into. I was totally looking forward to taking everyone out for dinner, but wanted to get a bike ride in first. I realized that I had sent Turtle down to the mechanic to take care of a few small repairs earlier in the day and hadn’t heard back from him which would be a problem since I was planning to use Turtle not only to get to dinner, but also to pick up some of the people who were coming to dinner. 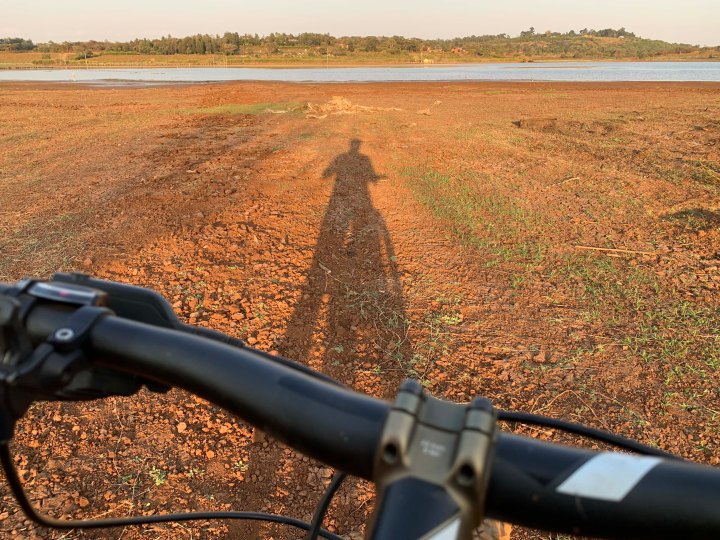 A view over the handlebars

I arrived home from clinic and got everything ready for an evening bike ride and took off down the FAME road hoping to fine some nice new route to travel through the back streets without swallowing too much dust from the passing cars. The dry season here can be absolute murder for anyone with respiratory problems around here, and even for those without any issues. The red clay dust coats just about anything within several yards of the road so that all the roadside plants have a reddish orange hue which is usually the tint as my beard by the time I leave. Though I had brought most everything I needed to ride here, I hadn’t brought any bandanas to wear and though I had spoken with Phoebe who was pretty sure she knew where to find some, they wouldn’t arrive until the weekend, so I would have to suffer for yet one more ride with more enough gritty dust in my mouth.

Looking at the map of where to ride, I did notice that there was a small lake or pond that was on the southeast outskirts of town, or directly cattycorner to where FAME sat on the map. I traveled through the backstreets and then across the highway and into the backstreets on opposite side of town. I eventually found the lake and sat admiring the scenery when my phone rang and it was Soja, our mechanic, telling me that Turtle was just about finished with all of the work that consisted of more than I planned which is usually the case considering the wear and tear these vehicles take here. I hustled back across town to the FAME road and pedaled continuously, eating dust all the way, to make it home before Soja did with Turtle. I beat him with lots of time to spare, though would have to leave very shortly to pick the others up and meet at the restaurant at 7PM with everyone else.

Joel, Selina and Me

By this time, I was starving and quite ready for my nyamachoma, though knew that it would be at least another 30 minutes before everything was cooked. That gave time for everyone to arrive, which in the end was about 9 people. The meat was delicious as expected and we had a second round of meat, taking at least another 30 minutes after ordering, to finish things off. I had decided that this would be my treat considering everyone there had something to do with the neuro clinic and the final bill that included all the beef, chips, and several rounds of drinks was 120,000 TSh including a generous tip that was much appreciated by the waitress. That turned out to be a bit over $52 USD for nine people! It was a great evening that was enjoyed by all.