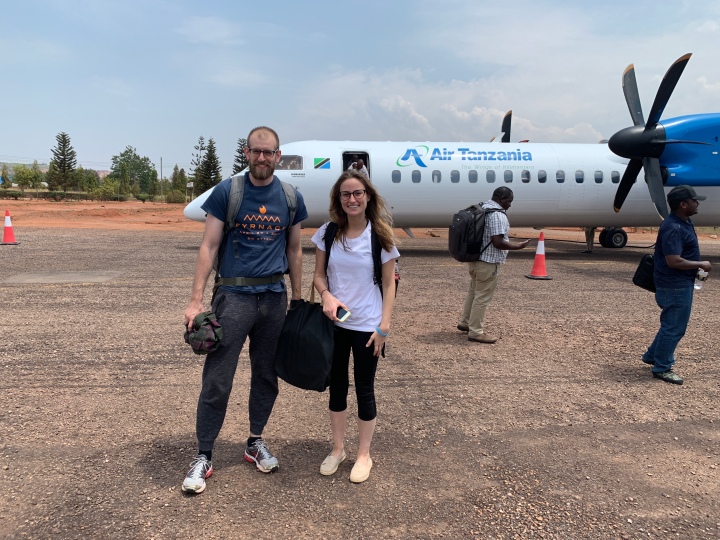 On the tarmac – arriving in Kigoma

We awakened quite early to meet our driver at 6 AM for our drive to the Dar airport. As I had mentioned earlier, we had requested bringing breakfast with us since the kitchen wasn’t opening until 6:30, but the breakfasts, which left much to be desired, were comprised of a piece of white bread (not toasted) with some jam, a banana, and a juice. Needless to say, we were all still quite hungry when we arrived at the airport. We went to check in, but were told that check in would be 7 AM for our flight, so we sat and waited. Thankfully, Leah noticed that the small sign about the check in desk had changed and now had our flight so we weren’t last in line, but after having checked in, found that our “new” departure would not be until 9:30 AM, much to our frustration. Thankfully, there was a small snack bar where we were able to get something to eat or drink given our less than satisfying breakfasts. I ordered two samosas and a diet Coke, a very hearty breakfast indeed.

Ebola warnings in Kigoma, across the lake from the DRC

It was time for our departure and we all boarded the plane which was a prop plane similar to what we had flown in from Kilimanjaro. The flight was two hours long as it completely crosses Tanzania from east to west, essentially following the same path as the railroad that was built here a number of years ago and can still be taken from Dar if you’re more adventurous. The railroad had been built to help bring goods not only from Western Tanzania, but also from the Congo, DRC, to the ports for export. Kigoma is still a business center for the region and it is the only access point to Gombe Stream National Park, famous for the site of Jane Goodall’s extraordinary work on the wild chimpanzees of Tanzania that began in the early 1960s and still continues today.

The baggage “carousel” at Kigoma

None of us had any idea of what to expect since none of us had ever been to this region before nor did we have much of a description of the area. I guess you can say that we all came based on the thought of visiting such a remote area and getting to see the chimps. But first, we had to land in Kigoma, which is probably one of the tiniest of commercial airports that I have ever been to. The single small building there says “departure lounge” on the right half and “arrival lounge” on the left half. There was nothing in between. The plane taxied onto the tarmac and let everyone off on the opposite of the place from the “lounges,” meaning that we had to first negotiate our way around the plane before we could head towards the terminal building. We had to show our passports to enter, which they recorded asking our destination, while informational signs warning of Ebola symptoms were on the wall behind the desk and at other locations. With the DRC being so close and reported cases of Ebola, no one takes anything for granted around here. 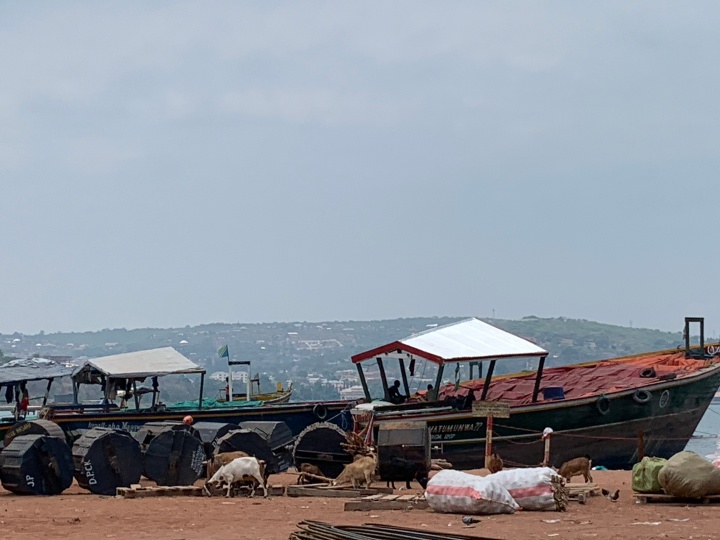 A scene along the “docks” 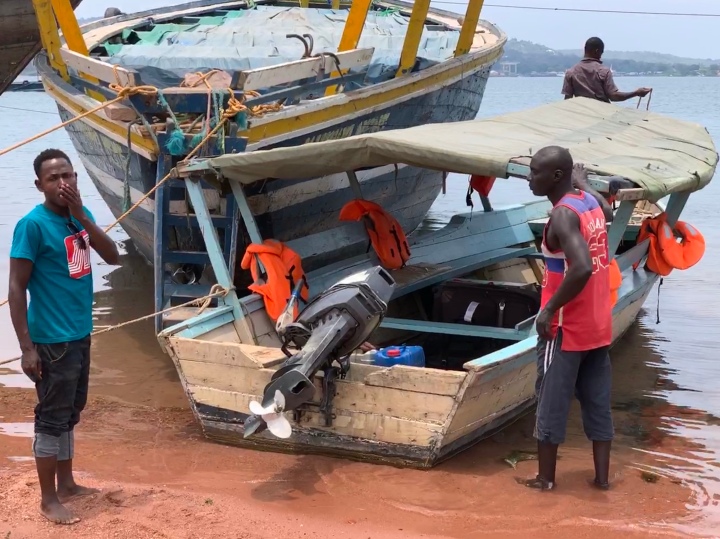 Our water taxi to Gombe awaits us

The arrival lounge had no chairs or other conveniences, but was really just a square room with a big opening on the tarmac side with a large platform on which they placed luggage as it came in, necessitating that passengers get their bags before they could put additional ones onto it. Of course, our bags were at the bottom of the cart they used to unload everything and then wheel over by hand. Regardless, we all had or baggage, which was a huge plus, and we were now ready to step outside and find our driver. Given the size of the aircraft (small) and the fact that were nearly last to get our luggage, this was a simple affair as there were few drivers left standing in the parking lot. We loaded everything and drove through the outskirts of town, towards the place where we’d find our transportation for the next leg of trip – a boat to take us to Gombe. We pulled up to an area where there were many, many boats of all sizes in the water and pulled up to shore. All were the very common wooden boats of this area, most with engines and some that were very much bigger than others. Joshua, from Gombe Safaris who we had booked with, met us there and introduced us to Juma, who was the captain of the boat we were to take, which though it was one of the smaller ones, looked quite sea worthy and had tarp over the top that was reassuring. 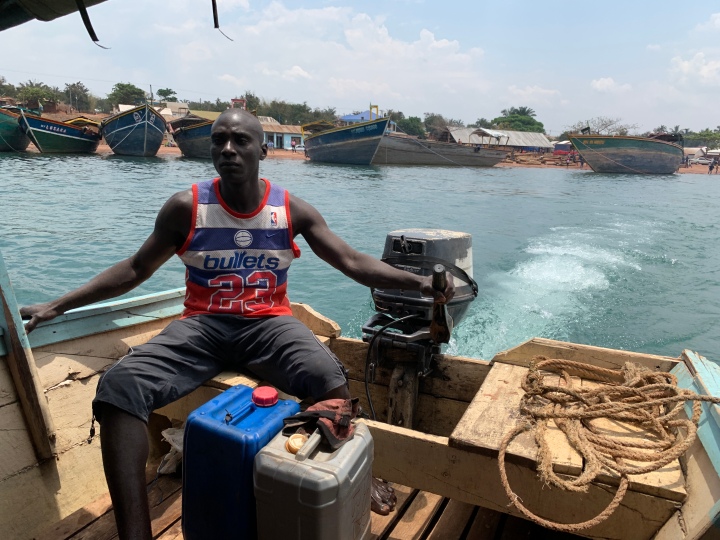 One of Juma’s assistants on our way out to Gombe

Leah and our captain, Juma, who I later discovered can’t swim

Our bags were loaded onto the boat and we all found seats for the two hours that would be necessary to reach the central part of Gombe where we were staying. It was immediately clear to me that we were also bringing the groceries to camp as there was a large basket in the middle of the boat which contained all sorts of fresh produce. There was also a string of freshly caught fish hanging on a nail on the inside of the hull which I was also pretty certain that we’d be eating either tonight or the next day. At some point as we were heading out of the harbor, Juma did suggest that we put on life vests which was probably more appreciated than not given the small size of our boat, the massive size of the lake and the length of our trip. Thankfully, there were no mishaps during the journey as we plied close to the heavily wooded shore, occasionally passing a small fishing village or boats out fishing with their tiny crews. Once we reached the park boundary, though, there no more villages to be seen and we still had quite a ways to go.

Unbeknownst to us at the time, we were looking at tonight’s dinner

At one point, we pulled up along the beach and some guides and visitors came out of the forest and tall grass. They had apparently been looking for some of the chimps, but hadn’t seen any, which was unfortunate as most of them were only on a day trip from Kigoma and were heading back home empty handed. One of the visitors, though, did come back to camp with us. He turned out to be an anesthesiologist from Ireland who had been working in Tanzania and was now traveling on his own before heading back home. He would be spending the next two nights with us in camp and we enjoyed his company. There was also another group of three women who were in camp for two nights, but other than that, we were pretty much alone here. Before we arrived to camp and while still on the water, it began to rain on us, but there were no issues as it was quite refreshing. A view along shore

On our way here, Katherine from FAME had texted me that she spoke with a friend of hers who works here at Gombe as a guide and that she had told him we were coming so we should look out for him. “Promise” was his name and as we initially got off the boat and were welcomed, I mentioned that we were looking for Promise as he knew that we were coming. Everyone looked at me like I was a bit crazy and seemed to have no idea who Promise was until finally, one of their faces lit up and then said, “Oh, you mean Ahadi!” Of course, Promise in English translates into Ahadi in Swahili which is what everyone here knew him by. Once we figured that out, all was well and, in very short order, we were able to meet Ahadi, who was as pleasant and reassuring as anyone I could imagine and he proceeded to help orient us to camp. 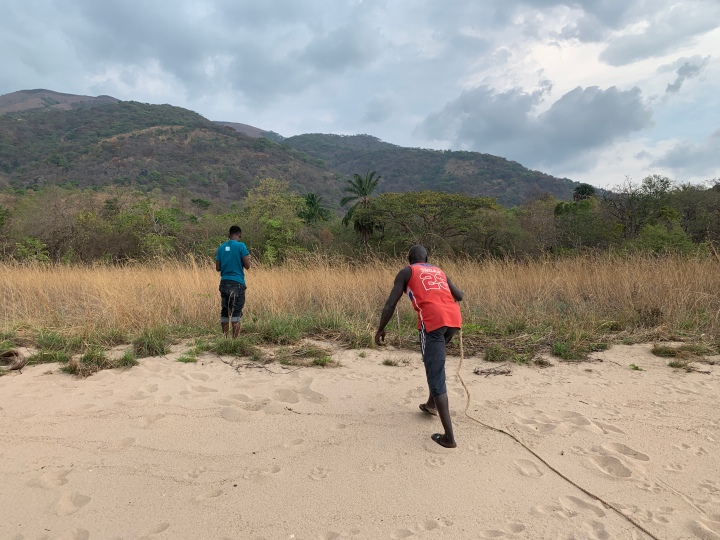 Tying up the boat as we wait for the trackers

We stopped off before arriving to camp to possibly trek, but only picked up a passenger

One of the first things we learned was that the baboons, who populate the camp along with the staff, can be very pesky at times and are well adept at opening the zippers of the tents requiring that they be locked at all times when you’re not present, unless you’d like to see them playing with your camera equipment high up in the trees or possibly wearing your clothes. Since neither of those things rank high on my to do list, we decided to keep the tent religiously locked when not present. The tents, though not entirely glamping as it was in the Serengeti, are really quite comfortable with two large beds on a permanent platform with running water and electricity (though not 100% dependable which I’ll go into later), a toilet and a shower. Unfortunately, the hot water is not currently working for the tents, but we all pretty much decided that was more than reasonable at such a remote place and cold showers would have to do. 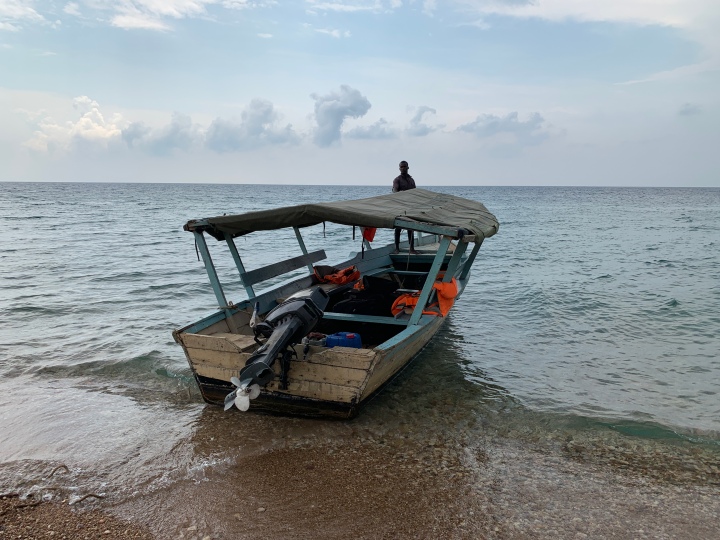 Meals are eaten on the second floor of the rest house (you can choose to either stay in the rest house rooms or the tents with the latter being ever so slightly more expensive) and the food is cooked by, none the less, Juma, our captain. On our way here, he had handed each of a bag lunch on the boat that was a vegetarian burger on a huge bun with secret sauce that was really delicious, along with some mango juice to wash it down. When we finally arrived to camp, we were also offered lunch, by Juma, who must have thought our stomachs were bottomless. Of course, we had to eat the lunch so as not to offend anyone, and considering it was the amazing fresh fish that we had traveled on the boat with us, we weren’t about to argue. Later, though, when Juma asked us about dinner, we all immediately agreed that we were just fine for the evening and really didn’t need anything else to eat. 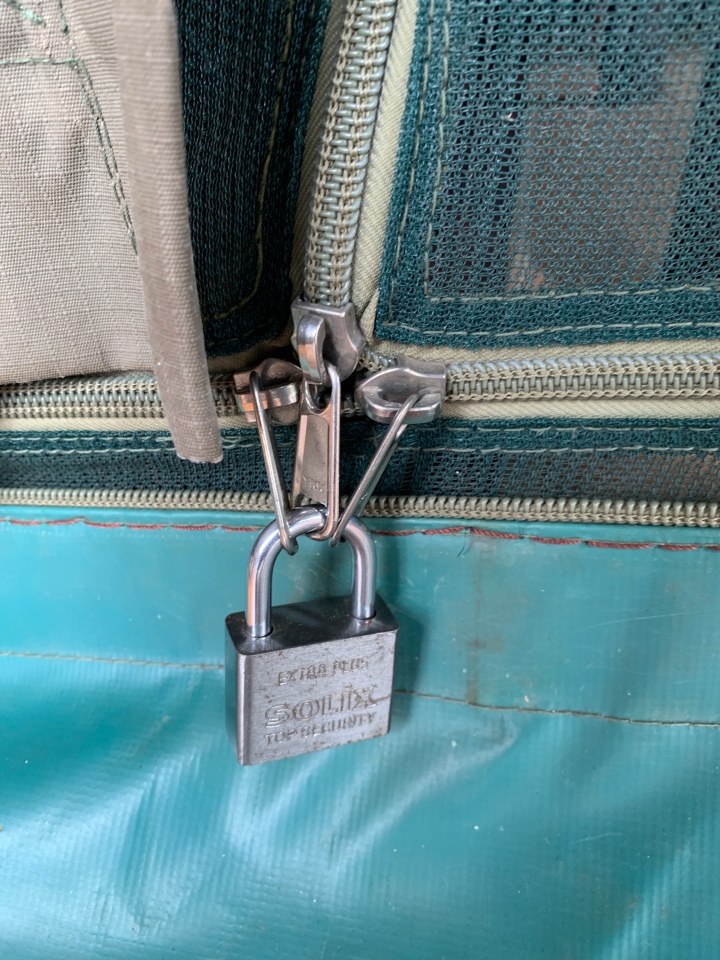 Tomorrow would be our first trek to see the chimps and I think that all of us were very excited over the possibility of seeing them in the forest, though at the time, we really had no inkling of what that was going to involve.