We had been so overwhelmed yesterday by the outpouring of patients, that it only made sense to return to Barazani and finish up what we had started. We had ended up seeing 42 patients the day before, or essentially ten seen by each resident. This was clearly the highest number of patients we had seen at any previous clinic and was only possible given the dispensary’s willingness to assist us in caring for their patients along with the outreach that was done both by FAME and the dispensary. We had anticipated seeing an addition 25 patients today, but in the end,  we had seen 29, making a two-day total at Barazani of 71 patients. 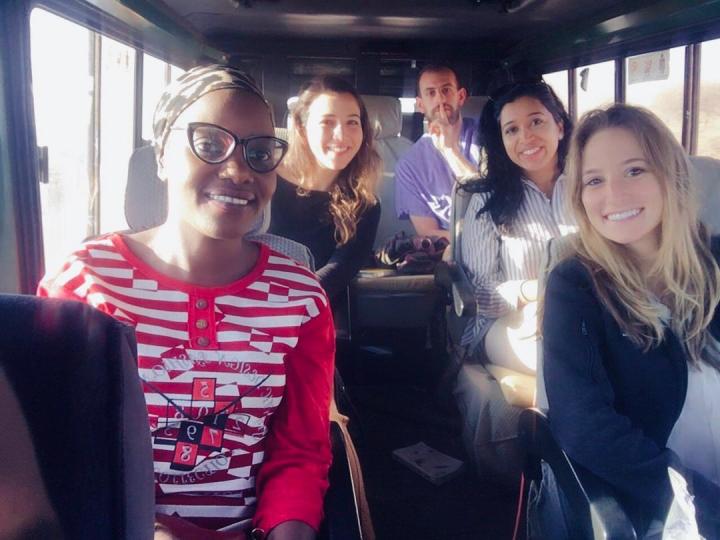 We were again planning to bring the entire neurology group that we had brought the day prior meaning that we would need two vehicles to travel Barazani and that everyone would once again be able to experience that wonderful road. It would be appropriate to mention here of the struggle that occurs with each and every rainy season to maintain the roads as passable given the raging torrents of rain that can fall in a matter of minutes and causing a deluge of mud and rocks that rain down from the nearby hills producing flash floods. One such storm that occurred several years ago when Danielle Becker and I were here completely severed the main road on this side of Mto wa Mbu at the entrance to Lake Manyara National Park. The park entrance had been a wonderful collection of small buildings for entrance and bathrooms that were below the level of the parking lot and were completely covered with large boulders to the depth of about 10 or so feet, nearly completely disappearing in the process. They’ve since built new entrance buildings and bathrooms, but the old structures still sit and their roofs are visible to everyone. Danielle and I were left with a bit of a dilemma as any transportation through this region was impossible other than flying from Manyara or taking a bus to where the road had been washed out, crossing over the now empty riverbed with our luggage and boarding another bus on the other side. The problem was, we had a vehicle at FAME that needed to get back to Arusha and though leaving it FAME to be picked up later by someone else was an option, it was really a last resort for us. The road opened after three days and Frank suggested that we leave early (we still had three or four days left here) to make sure that it didn’t get washed out again by the next rain, but neither of wanted to cut our visit short, so we just stayed put and crossed our fingers, though, to be honest, I’m not sure which scenario we were praying for. If the road washed out again, we’d be stranded and would have no alternative other than to remain here in paradise. The neurology team ready to get started

There are always inevitabilities like this wherever one lives, but it seems to be that much more frequent here in Africa. It is tremendously more necessary here that one “goes with the flow” for there is little alternative otherwise and so much more here is out of one’s control. That doesn’t mean that you tempt fate, but it does mean that you have to accept these risks and carry on. Thankfully, it has always worked out for us in the past and, while some of that might have been due to luck, a significant amount has also been related to a level of trust and belief that things would work out for the best. A bit of planning can certainly help as well.

We arrived early to the dispensary in Barazani and patients were already there waiting for us. Yohan prepared to begin registering patients, but most of the holdovers from yesterday had already been registered and were ready to be seen by us. Marissa ended up seeing a young child that had a weak and flaccid right leg probably following a febrile illness. Though polio has reportedly been eradicated here for several years now, I am always just a bit suspicious of this fact and tend to include it in my differential for an acute flaccid paralysis. The event happened some time ago, though, so it would not require any immediate treatment or reporting to the authorities, and it could also be just as likely, if not more, that this problem was secondary to an enterovirus. Regardless, there was little for us to do at the moment other than perhaps some physical therapy. I believe it was Andrea who also had an interesting, though rather typical, presentation of Alzheimer’s disease in a not so elderly patient that had seen. Unfortunately, there is very little to offer these patients other than checking labs for reversible causes of dementia (HIV, syphilis, thyroid), though it is not that different at home where all we have to offer additionally are medications that only slightly delay the symptoms of the disease, but are not disease altering in any fashion. This is the holy grail of treating Alzheimer’s disease, a therapy that will in some way alter or halt the progression of the disease or even treat it before it is symptomatic, but it has yet to be found. Given the little we have to offer at home, it is even less so here in Tanzania.

We finished the day rather early and were able to see all the patients who had showed up in the morning. Our total for the morning was 29 patients and I learned later that another 15 patients has arrived wishing to be seen after we left for home. We were all starving as it was after 2 PM by the time we finished seeing patients and thankfully we were able to eat our lunchboxes prior to departing. The drive home seemed longer to me than yesterday’s, though I’m not exactly sure why. We had left ahead of the other vehicle and had managed to stay in front of them the entire way to avoid any dust. The road was just as bumpy as it had been before, and we arrived home well before the time we did yesterday. We had planned to go out to Happy Day again and possibly even the Golden Sparrow after that, but in the end, everyone was pretty beat from the two days of clinic in Mang’ola, so we ended up relaxing at home for the evening. Mike had a talk to give the following morning, so at least he had an excuse. The rest of us just worked on various personal projects before the exhaustion caught up with us.