This is the start of our first full week of neurology clinic at FAME and typically our biggest day. Because we had actually decided to announce the clinics on Friday and Saturday, though, it seemed less crazy today than normal. That may also have had to do with our new space and the fact that some of our patients were waiting outside and some inside giving us the perception that there were a few less patients. Regardless, we had plenty of patients waiting for us at the start of the day. Interestingly, each of our visits during the year, one in the dry season (our fall) and one in the wet season (our spring), have consistently had a significant difference in the number of patients with the busier season being the dry now by a factor of one-third. Over the last several years, we have seen approximately 400 patients in the dry and 300 patients in the wet season, consistently. The reason for this seems to be not only the difficulty in transportation in the wet season as some of the roads to the more remote areas may be impassable, but also the fact that some of the planting occurs in the wet season. Either way, the experience for the doctors here and the residents has continued to be a positive one and, for this reason, we have continued to come back year after year. We’ve already seen approximately 75 patients in our first three days of work here which, though not a record, has certainly been a good start for us. 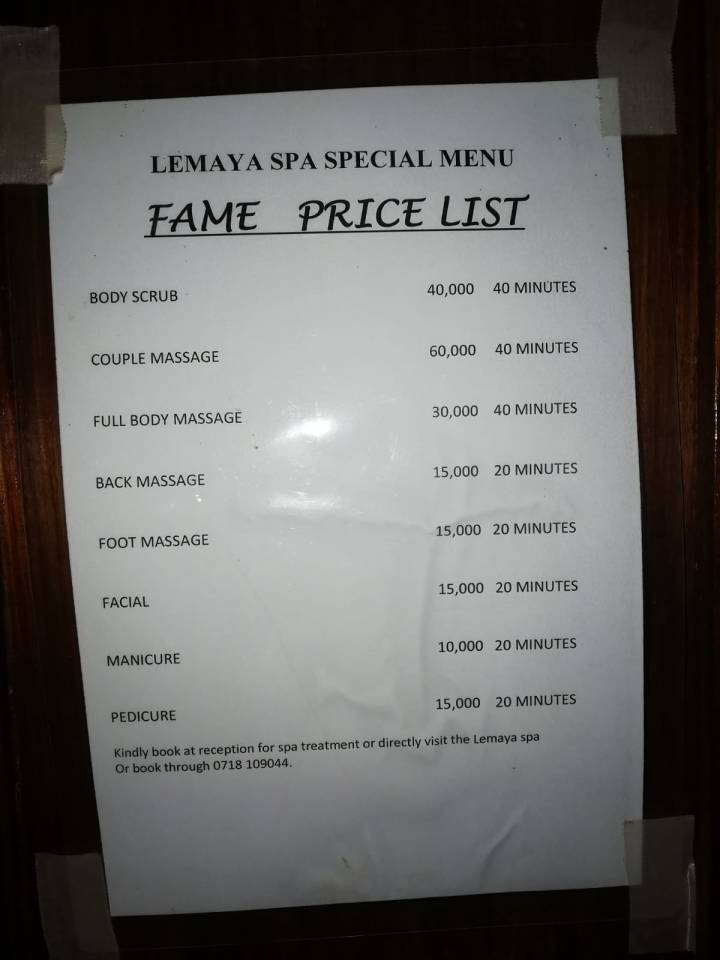 Morning report was rather short, and the first thing that we noticed is that we did not hear about our poor Hadza woman which would mean that she had passed about Saturday night into Sunday morning given that we were not at report yesterday. We confirmed this fact later after report and were grateful to hear that her suffering was not prolonged. She was really not on support of any kind as she had not received feeding and her IVF had been stopped. There was nothing in her appearance to suggest that she was suffering any physical pain so there was no need for us to administer anything from that standpoint. She had very likely slowly slipped away as a result of her intracranial hemorrhage and probable hydrocephalus.

Though the volume of patients seemed lighter than normal, we still managed to see the same number of patients that we had on the other days and the neurological illnesses that we saw remained essentially the same with an excellent distribution of disorders. The pathology that we see here is actually excellent from a teaching perspective and the residents have a great learning experience from that standpoint as do the FAME medical staff that we’re working with and any others sharing in the experience. 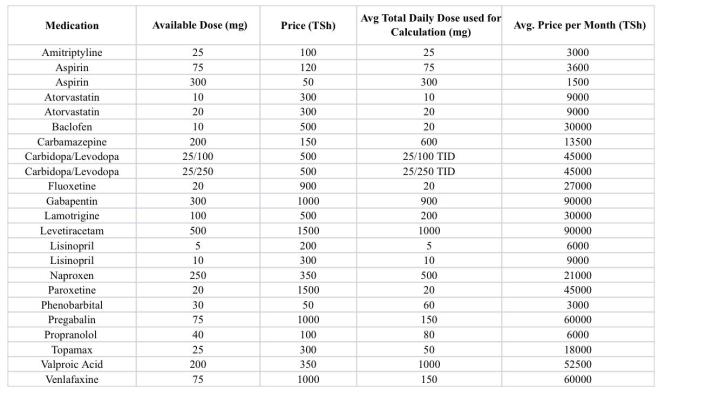 A list of medications we use with prices and sample monthly cost for patients that Leah created for us. $1 = 2300 Tanzanian shillings

The case of the day, probably, was a gentleman of about 80-years-old that Mike saw who had been normal until about one month ago, and then had begun to lose his ability to walk and communicate properly. There had been some concern as to whether he was encephalopathic or aphasic on his examination as it is always more difficult to determine this when you’re dealing with one and sometimes two translators, but there was very little question that he had a right hemiparesis with increased tone. There was no history of trauma and he had not complained of a headache at any time. Our main suspicion was that he had an underlying mass lesion or a stroke and it would be necessary for us to get a CT scan of the brain with and without contrast with the possibility of a mass being on the differential. MRI scans are so much more sensitive for detecting tumors, but the closest MRI scanner to us is in Arusha and the cost is more than double that of the CT. Thankfully, the family was able to raise the funds necessary for the CT scan (200,000 Shillings, or about $86) and returned with the payment in several hours. 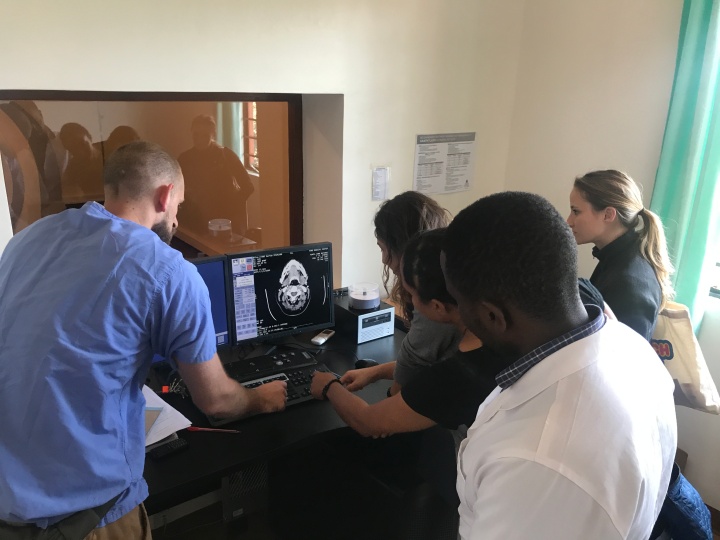 Watching our patient getting their CT scan

The price of the CT scan, though quite significant for local residents here, is dramatically less than it would be in the US (by magnitudes) and the cost can often be a hurdle that can’t be overcome here. In East Africa, patients and family members will go their village or other family members to help with the cost of medical care as these burdens are considered to be shared and not that of the individual. This is a very significant feature of the culture here and has to do with how community property is viewed. A wonderful discussion of this phenomenon can be found in African Friends and Money Matters that is well written and discusses specifically how both money and knowledge are shared in East Africa and are completely opposite of how we approach these issues at home in our own culture. Also, the issue here is that although there is a national health insurance that Tanzanians can buy into, most do not and have to pay out of pocket for any medical expenses that are necessary. This then necessitates that  patients are charged for services they receive at FAME and, though they are very, very reasonable, they can be quite out of reach for others. Both Angel and Kitashu will often work with patients to assess what they can afford and if there is anything that can be done for them, they will do it. If medical care were totally free at FAME, they would be immediately swamped with patients from all over the country who would have traveled days to get here for free medical care. That system would immediately fail as there would be no sustainability.

In addition to the issue of a patient being able to pay for their medical care (which, by the way is very reasonable at less than $2 for a new patient visit), it is imperative that one considers what you will do with the results of a positive test before it’s ordered. Sending someone for a costly test such as a CT scan or MRI scan should also include a discussion of what you might find and where that might lead in regard to potential treatments. Obtaining a scan demonstrating something that requires surgery when the patient or family is unable to afford the cost of surgery is really a needless study. Of course, that discussion will also include all of the possible alternatives such as traveling to Dar es Salaam if one has the government insurance perhaps, but in the end, to be seen in Northern Tanzania or elsewhere, one must have the necessary funds to pay or, at the very least, to provide a deposit. There are very few, if any, social safety nets here which can often be a struggle. 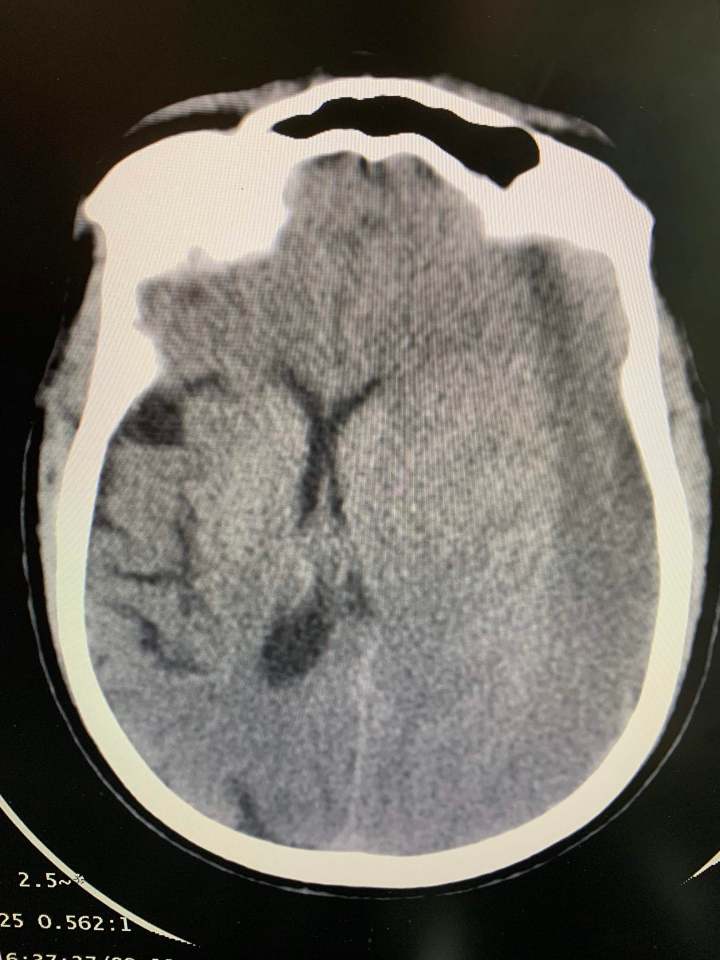 Our patient’s CT scan with a large chronic, and some subacute, subdural hemorrhage

Our patient returned towards the end of the day to have his CT scan and we were rather thankful that they were able to do it. The scan demonstrated a very large chronic (old) subdural hematoma with midline shift that was clearly causing his neurologic deficits. There had been no history of trauma or complaint of headaches and, yet, he had a finding that we usually associate with both of these factors. Given the amount of compression and midline shift, doing nothing at this point would probably ensure that he would worsen at some point and what he really needed to have done was to undergo an evacuation of hematoma which would hopefully relieve the pressure on his brain enough for it to rebound somewhat, though the expectation would be that he would not fully recover. At his age, it would be likely that the brain would not have enough resilience to reoccupy the space vacated by the evacuated blood. This can result in the situation where he will be more likely to reaccumulate fluid in the space, otherwise known as a subdural hygroma, or, worse yet, have a recurrent hemorrhage back into the same space. We discussed the CT scan with the patient’s son, who had accompanied his father to clinic, and rather than admitting him to the hospital since he had been stable for a month, he went home to return tomorrow morning so we could discuss the various options for treatment. 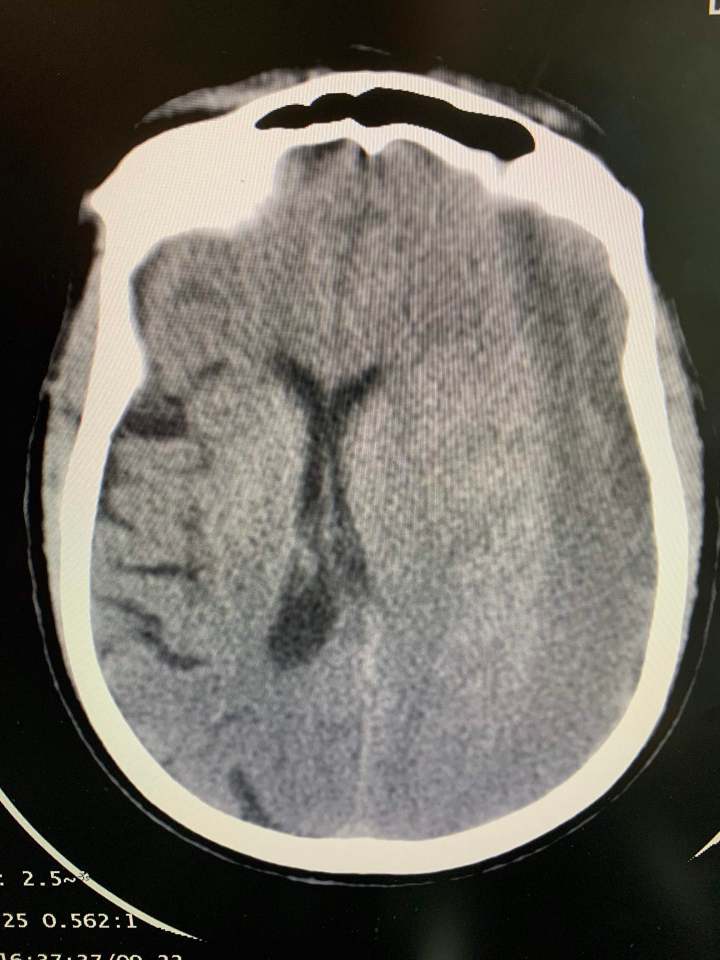 Our patient’s CT scan with a large chronic, and some subacute, subdural hemorrhage

As we had no internet at the house – just for perspective, we have never had internet at any of the houses – everyone (save Mike) wanted to stop by the Vodacom shop after work to get local sim cards for their phones so they would be able to contact the outside world on a more reliable basis than borrowing the data from my iPad (not that this was an issue, of course – please read that with a bit of sarcasm). We loaded into Turtle at the end of clinic and with little time to spare and made our way to the Voda shop with Phoebe in tow to help out if needed. The group piled into the shop to make their transactions while I waited out front with the vehicle and made lots of new friends, while also seeing many old ones, during the time I was out there. Stopping on the street anywhere in town we are very likely to attract attention and over the many years of being here, many of the local “street merchants” know me by name. I never buy anything from them, but they somehow continue to tolerate me and there are several young boys who I have seen grow up on the street trying to make ends meet. After about 45 minutes, everyone finally emerged from the shop with smiles on their faces, a definite sign that they had been successful in their quest. 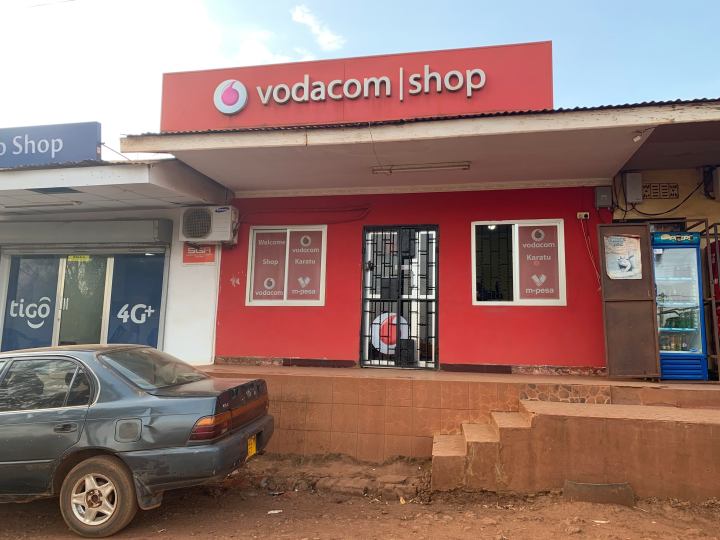 We drove back to FAME as our dinners were there waiting for us as was the veranda and a cold beer (for some of us). It had been Ray’s first day in clinic and I was genuinely interested in his impression of the patients and how things went. It was clear that he had an amazing time staffing the residents as I had imagined he would, for here it is medicine the way medicine was meant to be practiced (sorry for those who have heard this multiple times before from me). It is medicine for medicine’s sake and no other. We are the lucky ones to have had the opportunity to work here in this amazing country and with these amazing people.

Everything was settling down for the evening when I received a message from Dr. Gabriel that they had admitted a 30-year-old gentleman with the worst headache of his life. After asking a few questions and realizing that Gabriel wasn’t in the ward, most of us decided to head up to the ward and check out the patient. The story was just a bit different, though we certainly had some concerns about the patient, mostly from an infectious standpoint (he had a low grade temp) and had recommended a lumbar puncture to rule out meningitis. The LP would most likely not get done until the morning as the lab was apparently not set up at night to do the cell counts, so we told them to call us if he worsened, but that he should be placed on antibiotics if he spiked a greater temp than where he was. It was back to the house and we relaxed for the remainder of the night as we had our educational talk to attend at 7:30 the following morning.