Even though Leonard and Pendo’s new neighborhood is tremendously quieter than their prior ones, the call to prayer at 5 am broadcast from the local Mosque was more than enough to awaken us from our slumber. Though the population of Tanzania is 2/3 Christian, Islam makes up the majority of the other third which is certainly enough to sustain Mosques in most of the small towns throughout the country. There also remains a small fraction of those who continue to follow their respective tribal beliefs and considering that there are more than 120 tribes here, each would be a very small fraction of the total population. Arising early in the household allowed Mike and I to get showered and ready well before the four women in our group had even began to stir, though Marissa did admit to having remained lounged in bed for a bit after having awakened earlier. Our tea masala had been prepared for us and we were able to get plenty of reading for pleasure done well before everyone else in the household was up and about, including the two little ones.

As the morning wore on, of course, it was getting time for breakfast as we had planned to depart sometime around 10 AM for Karatu and FAME. Pendo, of course, was also preparing to outdo herself with a breakfast spread for everyone, so it was more a matter of trying to move things along so as not to be to delayed on our journey. Pendo has always been the most gracious of hosts and despite the fact that our teams have grown in size over the years (originally just me!), both she and Leonard have insisted on having us stay with them on both our arrivals and departures. I have repeatedly offered to make other arrangements, but they have only fallen on deaf ears as they will have nothing of it. That is how it is here, if you are family or friend, as it would be unheard of to do anything less. Allowing them to provide these acts of kindness for us bestows an honor on them and their family. Daniel Tewa, who I met in 2009 during my very visit to Tanzania, has remained a close friend and has considered me family every since. Despite our constantly growing team of doctors, he has always invited us to his family’s home for dinner with each and every trip and has continually refused any mention of mine of just having coffee given our size. It is this sense of family and home that has always impressed me here and is the reason that I’ve considered this my home as well. 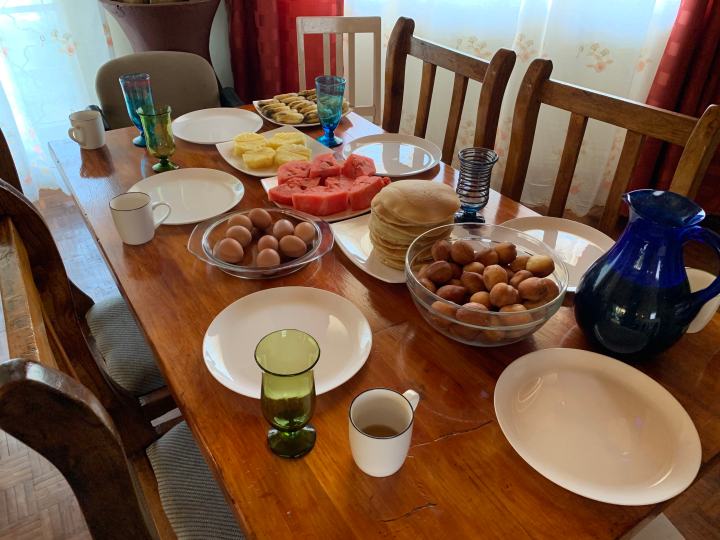 Following our delicious breakfast that Pendo had provided for us, we packed the Land Rover and prepared for our safari to Karatu. I think everyone was clearly ready to finally get to FAME and begin seeing patients after their long journey across the Atlantic and the Dark Continent. We loaded up the vehicle, which was no small task considering it was all six of us and our luggage for this month long trip, but thankfully it all fit inside and we didn’t have to strap anything on the roof. We made our way through the traffic of Arusha, a town of over a million people with very few traffic lights and many traffic circles that help very little to keep things moving. It was noontime by now and everyone was out on the street shopping for necessities and all of the public marketplaces were crowded. We made it to the west end of town, driving past the new mall that very few here can even shop in, and finally leaving the city environs behind having passed by the airport. The population becomes more and more sparse until there are few towns on this major thoroughfare of Tanzania, the only road to the Serengeti, and all that is recognizable for some distance are the Maasai bomas and random herds of livestock often shepherded by a young child of single digits. It’s the dry season, so things are very dusty and there is enough particulate matter in the air that the distant mountains on the other side of the rift and difficult to make out until you are nearly upon them.

We reached the outpost of Makuyuni, where the road divides and you can either continue on towards Tarangire National Park and the much further town of Dodoma, or turn right towards the town of Mto wa Mbu, or Mosquito River, on the way to Karatu. Mto wa Mbu is at the north end of Lake Manyara, which Hemingway visited in the early 1930s hunting rhinos and commemorated in The Green Hills of Africa all about his adventures. Sadly, there are no more black rhinos living in Manyara, though they have been making a steady comeback in Ngorongoro Crater with constant monitoring of their whereabouts and rigid protection. Leaving Mto wa Mbu, we ascended the steep escarpment of the rift with fantastic views of the Lake and park below before leaving the edge and continuing our climb to Karatu which is over 5,000 feet in elevation and the foot of the crater rim and the Ngorongoro Conservation Area.

Driving through Karatu and taking the turn off the main road is something I have done so many times now that it is all second nature. I can only imagine what it would be like for those that have accompanied me here for their very first visit. It is truly paradise here as long as you avoid the monsoons in late April and May, and even in the dry season which it is now, the plants are green and luscious. There are many, many flowering plants and trees that remind you that you’re in the tropics. The temperature is cool as we arrive, yet the equatorial sun remains incredibly intense and warms with its radiant energy. I have returned home and it is always exciting for me to bring my friends here to share it with them for every one of them has been equally impressed not only with the beauty of this place, but also with the friendliness and dedication of those who call FAME their home, many of whom have done so not for over ten years. Everyone is so excited to get started tomorrow morning. We make quick work of moving into the Raynes house and making it our home, eat dinner and have time enough to watch a movie for the evening . Everyone has selected Pretty Woman which we project on the wall and then we finally call it a night after a long day on the road. Tomorrow, we will begin our neurology clinic in earnest and everyone, including me, is looking forward to that.