It is Wednesday and we’re half way through our week-long clinic here at FAME with the mobile clinics to look forward to next week. The low volume has been a bit frustrating as I’m sure you can imagine, but the cases have been interesting and it’s been good working with Caren as I haven’t really had a chance to work with her much in the past. As I’ve mentioned before, it is our main mission to teach the clinicians here at FAME and when we are working with interpreters rather than a clinician, it is a lost opportunity to teach. Though it is great for us to see more and more patients here, the real impact and capacity building occurs when you teach a man to fish. When it was just me alone here, that wasn’t a problem, but as the program has grown over the years, with FAME growing as well, it has created a situation where they are more and more strapped for manpower which makes it more and more difficult for FAME to free up other clinicians to work with us. There are several solutions to this problem, but in the end, it has to do with funding, which always seems to be the case, and the only resolution that I believe will give us some immediate solution going forward will be for us to have a designated clinician or two who will continue to provide neurological care to our patients. 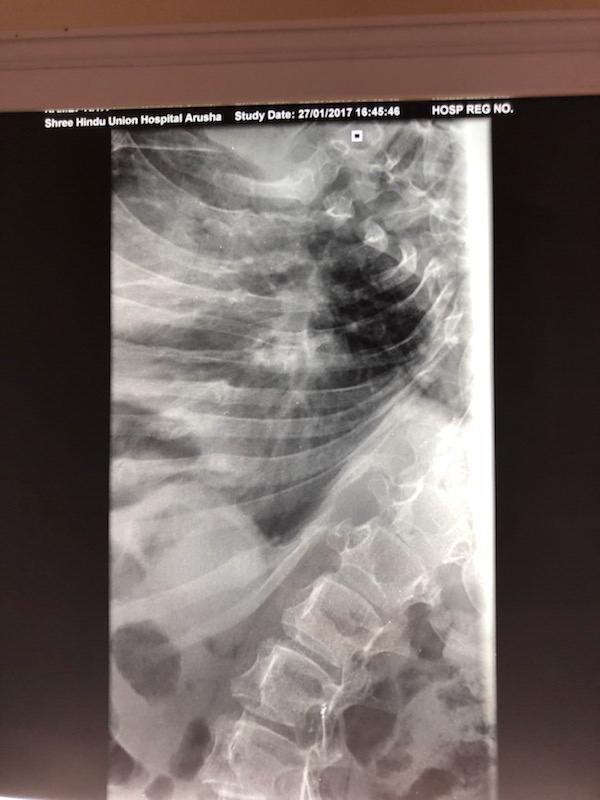 The severely scoliatic and translucent spine of our osteogenesis imperfecta patient

Frank had posed a question to me last week regarding which specialist would be most appropriate to follow an adolescent with osteogenesis imperfecta. I had replied that it would be a pediatric endocrinologist and pediatric orthopedist most likely, which was later confirmed by his speaking with one of his resources in the US, but at least I knew that it wouldn’t be a neurologist, let alone an adult neurologist. As things go here, though, it usually turns out that we will end up seeing patients like this just to help out with whatever we can. So, this young girl with very serious osteogenesis imperfecta arrived to clinic today after having traveled down from Arusha. She was accompanied by someone from the international association who was working with her to navigate what exists of the health system here, and they came with many records and X-rays for us to look at to help with the evaluation. She did have some chronic pain symptoms that were certainly something we could help with, but beyond that, there was little from a neurologic standpoint for us to focus on. Regardless of that fact, both Marin and Dan did have some helpful thoughts about what could be done for her.  Her disease was quite advanced and plans to do anything for her would have to take into consideration the real risk of doing harm in the end. Merely transporting her would poise an incredible to her well-being. She will absolutely need to travel outside of the country for something to be considered and it’s not entirely clear what that might be. 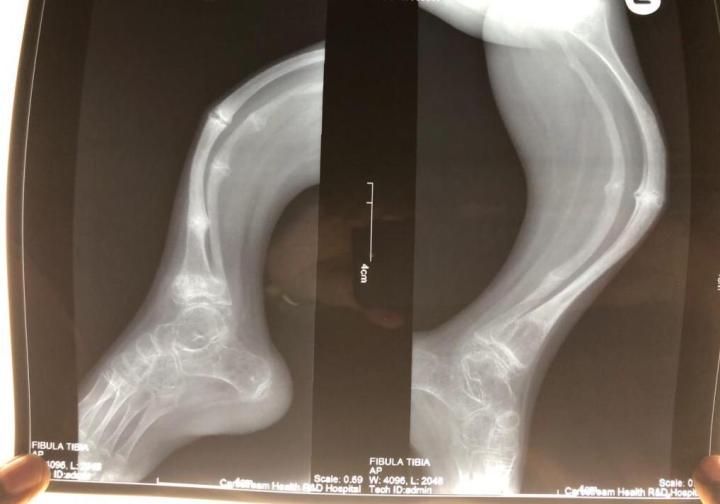 We also had another little infant come who was somewhat younger than our last with the similar problem of static encephalopathy and poor nutritional status. Once again, we contacted our sources in Arusha at one of the hospitals and were told that though they could see the child, the family would have to cover the cost of care. Though medical costs are most often very much less expensive here, they are typically going to be far outside of anyone’s or any family’s ability to pay. Patients will often go back to their communities to gain the funds necessary for some treatment which is the culture here. One of the lessons that are taught here is about unintended consequences and the fact that reaching into your pocket to help out, an act that we would consider the right thing to do, is not what one should do. It sends entirely the wrong message and rather than promoting self-reliance, it breeds continued dependence on others and is not sustainable in any sense. Though it is the ultimate intention to help others, without a plan and without first speaking with those who have been working in the area, it will most often lead to failure and heartache. There are many, many stories here of those wishing to help who have left in their wake millions of wasted dollars and nothing to show for it in the form of having made a positive change. Though this can be very frustrating, it is a lesson one must learn on Day 1. First and foremost, ask those you wish to help what is needed rather than giving them what you think they need. The latter tact will always end in animosity and lost friendship. 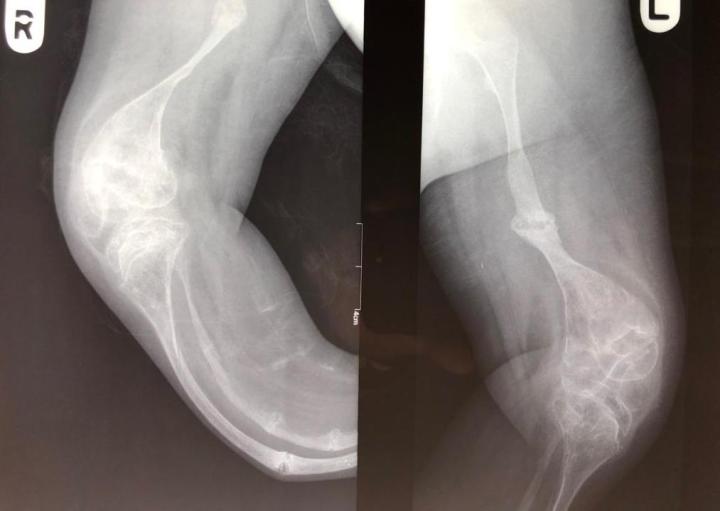 The weather here for the last week and a half has been nothing short of perfect. Outside of the first few days in Arusha and the heat, it has been just absolutely gorgeous – cool mornings and evenings, bright cloudless skies all day long except for a brief late afternoon rain shower, but we actually haven’t seen one of those in several days. The sun here is intense as we are just below the equator and it takes only moments in the direct sunlight to burn. We have no seasons here as we know them at home. Here, the seasons are known by their amount of moisture in relation to planting and harvesting. We are actually in the wetter season now where it is green and lush, there is less dust, and the planting is taking place readying for the rains of April and May. October when we have traditionally come, soon to be September this year and going forward, is much drier and dustier. Still, both seasons hold different benefits and both are lovely. 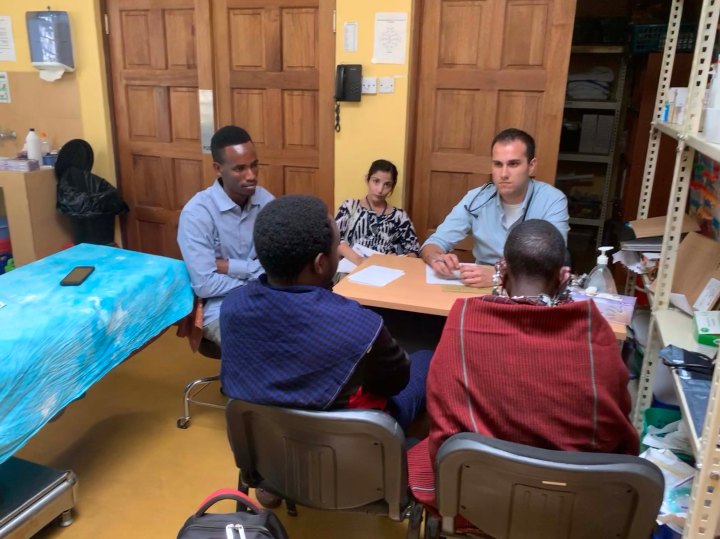 Daniel and Sheena working with Michael

As it is Wednesday, it is our Happy Day night. Again, this has been a tradition for several years for all the volunteers at the various sites in the area to mingle and share their “war stories.” It really is a time for everyone to unwind in the company of others of the same age and ilk. Everyone had decided to walk there tonight with the lovely evening, though I had to wait back at FAME as I was expecting to get Turtle back from the mechanic with its new emergency brake other small fixes. Soja, who is FAME’s mechanic, and has helped me with my vehicles for many years here in Karatu, brought Turtle back to me around 6 pm, which was perfect timing for me to drive him back to town and then meet Susan at the Lilac Café to chat. After my meeting, eating and catching up on some paperwork, I drove down to Happy Day with everyone sitting outside on the deck and lots of lively conversation already underway.

The new and much appreciated addition to the menu at Happy Day is ice cream!! There are no good sources of ice cream here and it is something that is sorely missed. If only we could get a Baskin Robbins or Rita’s (the latter a Philadelphia favorite source of water ice and custard) here in Tanzania, I would gladly promise to support them on a regular basis. For now, though, a cup of vanilla and strawberry ice cream at Happy Day will have to satisfy my sweet tooth. 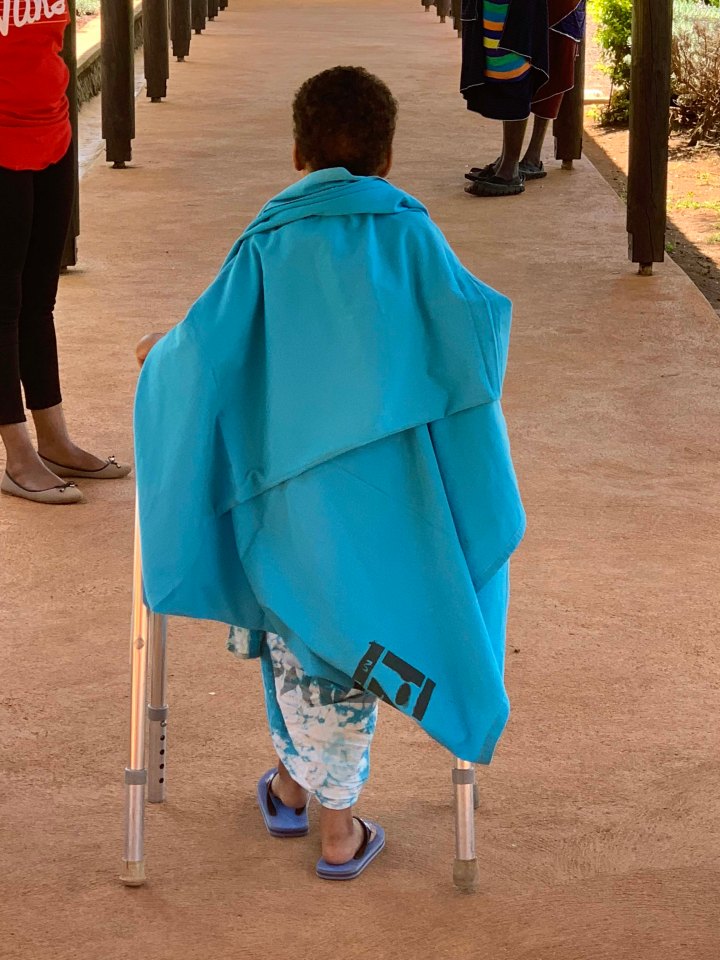 A young child from the ward struggling with their walker

As I sat down next to Sheena and across from Ann, there was already an ongoing and incredibly interesting conversation that also included Drs. Vic and Kelly. Dr. Vic Davis is one of Kelly’s mentors from her surgical training and has been here visiting at FAME during a brief interlude from his more long-term work with the surgical department at Muhimbili University. Vic has been working for many years, it seems, in practically every remote corner of the world with the International Medical Corps, among others, providing emergency and heroic surgical services just behind the front lines of war-torn locations. We were all in awe of his stories, which he told in such a matter-of-fact fashion that if you didn’t know better you’d think he was just related a normal day at the office. These were not glorified junkets as they to such locations as Afghanistan, Yemen, Somalia, Rwanda and Sarajevo just to mention a few. These were not considered vacation sites, and certainly not during his tenure in these locations. I think everyone who was listening at that moment found themselves thoroughly entranced and it became quickly apparent that what Vic really needed was a ghost writer to help him put all of this into a book. I would be the first in line to buy a copy of his book as it would tell a story of an incredibly unassuming physician’s true dedication to humanity. It was a privilege to be sitting with Vic at Happy Day this evening.