Despite the heavy rain and thunderstorm, I think everyone slept like logs needing to catch on their sleep deprivation and recharge their batteries. It’s amazing what a good night’s sleep under mosquito netting can do for you. We had arranged for all of us to travel together for a visit to James’ auntie where we finally be able to evaluate her tremor and to determine exactly what we were dealing with. The morning had been clear, but it began to pour as we left the house for our short drive to James’ home where we all scrambled onto the porch so as not be soaked. Our patient was waiting for us in the house and we all sat in the living room to commence with our evaluation. I had forgotten that Adys is planning to go into movement disorders and should have turned everything over to her from the get go, but I proceeded to obtain a thorough history from regarding the tremor and any other associated symptoms that she not have realized was significant. Other than her tremor, though, she had little in the way of other symptoms that we look for when dealing with Parkinson’s disease and its associated disorders. 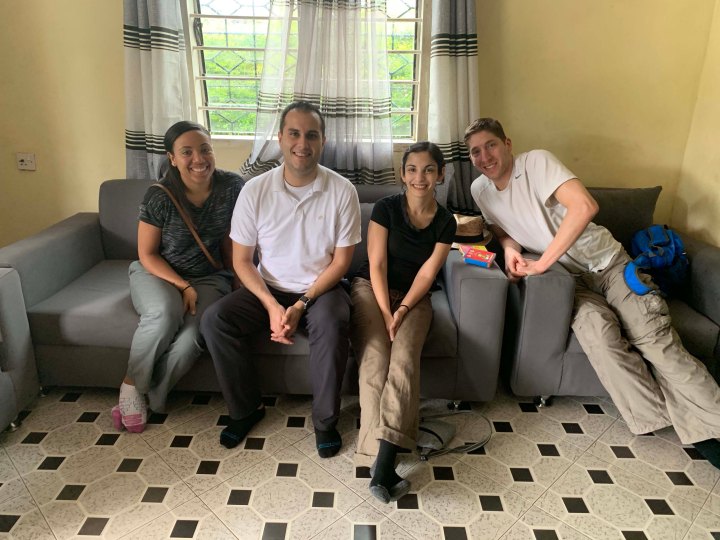 As I had mentioned previously, Parkinson’s disease is a diagnosis that is often made on observation and only confirmed with the examination. Everyone gave their thoughts based solely on their observation and then I turned over the neurological examination to Adys after asking who wanted to take the honors and her colleagues immediately deferring to her. The tremor was predominately resting and only slightly noticeable when using her arms or maintaining posture. It was very asymmetric and predominantly right sided. It activated significantly with any distraction and with gait while she also had diminished arm swing on the right. Afterwards, we discussed her case, putting together all of the aspects of her history and her examination and decided that she most likely had tremor dominant Parkinson’s disease, a subset of these patients with a typically better prognosis for disabling rigidity and gait dysfunction as well as dementia. Explaining something like this can be rather daunting, but she was a very insightful woman who was clearly absorbing much of what we had to tell her. She had read much on the diagnosis of Parkinson’s disease and was clearly scared once we had started the process of evaluating her, but in the end, after explaining everything to here, she was a bit reassured by what we had to tell her. It would require a few medication trials going forward, but I was fairly confident that we would eventually find something that would work for her. We departed their home with lots of sincere thanks and gratitude for having come to see her and the possibility of visiting her in Tanga prior to some of leaving for home. She was the lovely woman and I am hopeful that we will be able to make something like this happen.

The rain had mostly stopped by the time we left for home and when we arrived, it was thankfully no longer storming so that we all remained dry prior to our departure for Karatu. We had lots to load and having had to do so in the rain would have been perfectly demoralizing. We were finally on the road sometime after noon and I had decided that we would stop in Makyuni for fuel as we made our way towards to the Great Rift Valley and up into the Ngorongoro Highlands. It is normally a gorgeous drive, but this time of year, everything is incredibly plush and green. We refueled in Makyuni and picked up snacks for the completion of our drive. We were now going to be crossing the Great Rift Valley and on through the town of Mto wa Mbu, or Mosquito River, before climbing up the steep escarpment towards the Ngorongoro Highlands and Karatu. The scenery traveling along the valley floor by the mouth of Lake Manyara is pretty spectacular, but I have never felt it really prepares you for what you will see once on top of the rift and into the beautiful highlands where the most amazing coffee grows in the incredibly rich soil here along with the many other crops that are grown locally here.

We rise up and up until we are finally in the village of Rhotia where we begin the descent into the Rhotia Valley below with the village of Karatu off in the distance to the west. Even in the wet season, Karatu seems dusty in the distance which continually gives it that frontier look, as it is the last outpost before departing for the Serengeti and parts beyond. The tarmac ends some 15 kilometers beyond the town as you travel through the Ngorongoro Gate and into the NCA, or Ngorongoro Conservation Area. Beyond that is the crater and then you descend into Serengeti while passing by Oldupai Gorge, where Louis and Mary Leakey built their careers by finding oldest man here (Mary) and creating a dynasty (Louis) that included Jane Goodall and her incredible groundbreaking work with the chimpanzees of the Gombe. This area is so rich in the history of not only humankind, but also of the earth as it was millions of years ago. Ngorongoro Crater is a caldera created by the collapse of an enormous volcano three million years ago and represents the largest dry caldera in the world, and is its own ecosystem where the animals have no need to migrate. We are in a region that is rich in both geological and evolutionary history.

Gabriel taking a turn at the wheel

We finally arrived to FAME late in the afternoon as the clinics were closing and the residents finally had the opportunity to see where they would be spending the next month of their training. We would begin our clinic in the morning, though it would unannounced and hopefully somewhat less crowded than our clinics normally are. Our new volunteer coordinator, Phoebe, as Alex is now in Kenya as executive director of another NGO, had anticipated our arrival and we had our dinners waiting for us once we had unloaded the car. Perhaps equally important, she had also supplied our house with a case of Safari beer which was very much appreciated after the long and hot drive that we had had coming here today. We eventually all sat on the veranda eating our dinners, with the warm glow of the sunset in front of us along with our cold beers. There are few things in life that can equal these moments or the friends we share them with. It is these moments that will shape our lives forever and I am forever grateful that I have been able to share them with others. 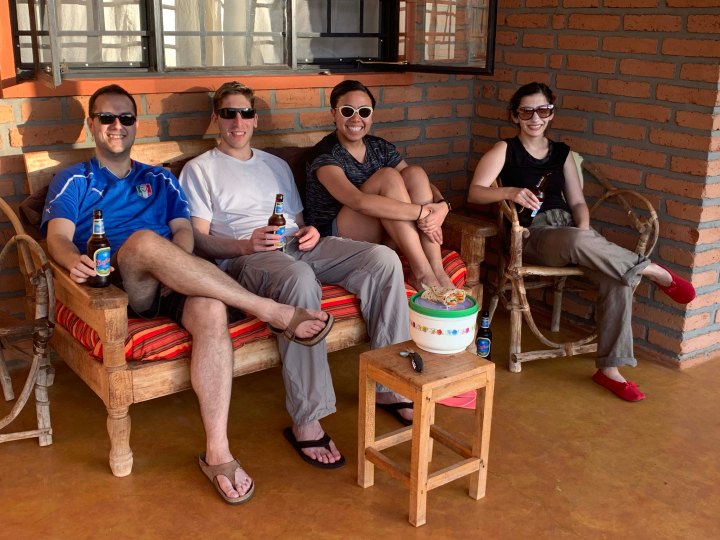 On the veranda at the Raynes house at last