Today we were heading to Kambi ya Simba, a small village in the Mbulumbulu ward of the Karatu District and about 45 minutes from FAME. Before our departure, though, there was a lecture to be given and today John and Amisha would be speaking about movement disorders (for example, Parkinson’s disease) in both adult and pediatric neurology. The talk was very well received and they had video examples of some of the more classic cases included some that we had recorded here at FAME. 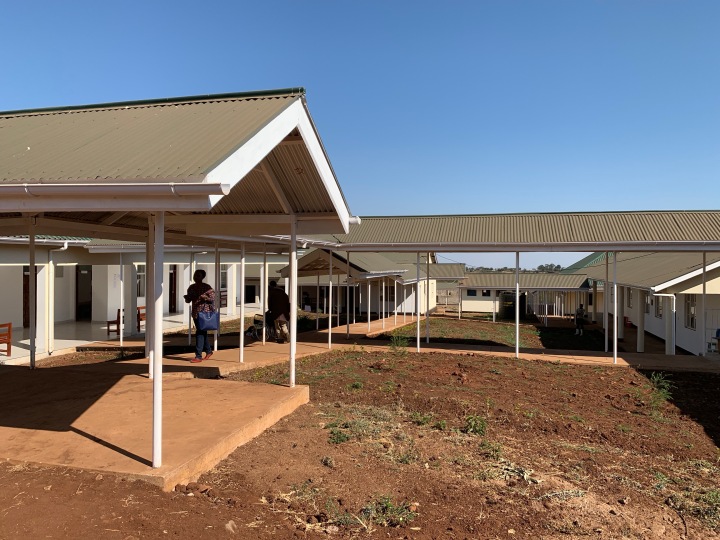 The new buildings at Kambi ya Simba

After the talk, we began to get everything together necessary for our visit to Kambi ya Simba. We would be taking Turtle as our transportation and because the weather was dry, I was going to do the driving to each location this week. The other members of our “crew” would include myself, the four neurology residents, our two interpreters, Emanuel and Shaban, our clinician, Dr. Anne (an assistant medical officer), Kitashu, our social worker, and Kitangile, our nurse. It is a totally self-contained clinic, meaning that we bring all of the medications we will prescribe to see our neurology patients and all of the tools that we would need to provide our care. 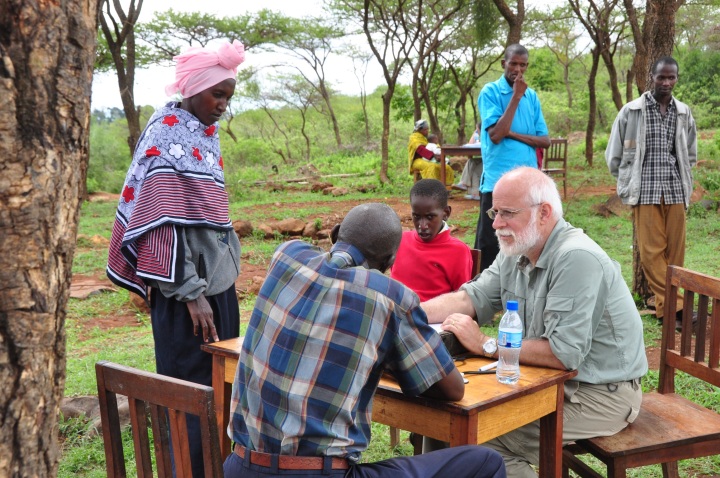 My “office” in the foreground, with the pharmacy in the distance. Our first clinic at Kambi ya Simba 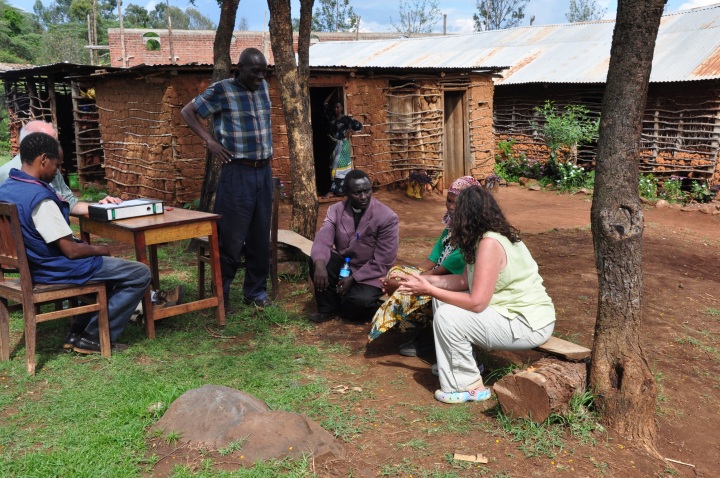 Our examination “room.” Paula Gremley in the forground. Our first clinic at Kambi ya Simba

I had first gone there in 2011 with the assistance of Paula Gremley and Amiri Bakari Mwinjuma. The pair had been working with FAME in their large monthly mobile clinics to the Lake Eyasi region, and following one of these clinics, at Paula’s suggestion, we went out on a smaller neurology mobile clinic to some villages that we could work with on a daily basis rather than overnighting in the bush. The two clinics included Kambi ya Simba and Upper Kitete, both in the Mbulumbulu ward. That first clinic included myself, Paula and Amiri, a nurse, and a clinical officer. We brought a large box of medications and set up our “office” out in the open in the middle of the village near the church, with the “pharmacy,” comprised of the nurse and her medications, situated a short distance away. This was the extent of our mobile clinics for several years and at that time, I don’t even recall whether Kambi ya Simba even had a dispensary. 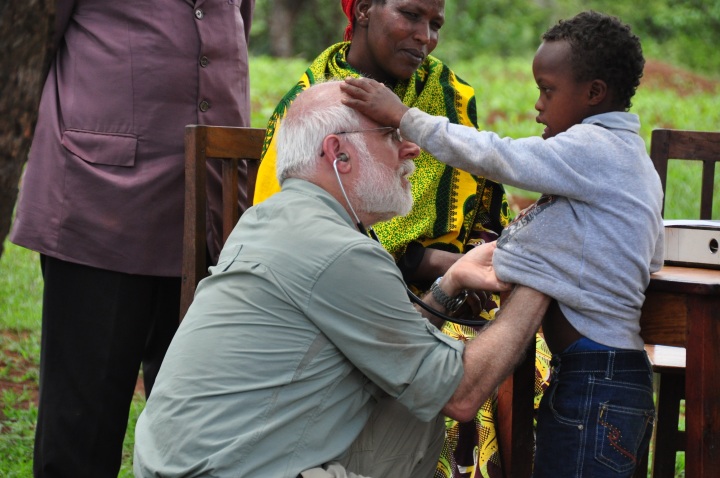 A scene from our very first clinic at Kambi ya Simba 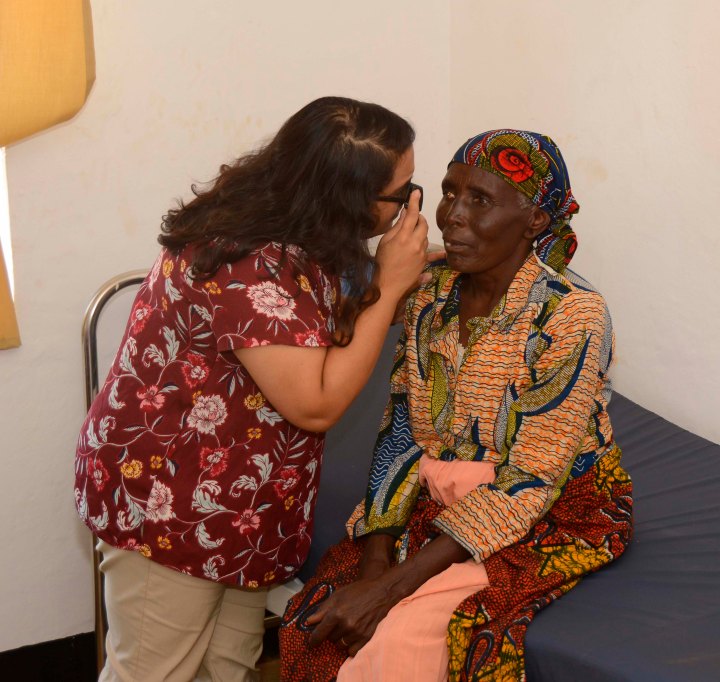 Amisha examining one of her patients

The drive to Kambi ya Simba takes us through very extremely fertile farmlands past the Rhotia valley and on to the Mbulumbulu ward. Despite the dry season, there is quite a bit of green as we meander through the hills in this area that sits at the top of the escarpment of the Great Rift Valley and continues until the mountains of the Ngorongoro Highlands meet the drop off and the road ends. This region is populated by the Iraqw tribe almost exclusively and their farms cover the countryside, but not in the way our farms extend over thousands of acres. These are all smaller family-run farms here as there are no large farming corporations here.

John and Emanuel evaluating a patient

As we arrived at Kambi ya Simba, it was clearly evident that the new dispensary completed several years ago has continued to grow even in the last six months since the last time I was here. In addition to the large number of buildings that are here now, they have rebuilt the original dispensary that we had begun to work in and now there is a covered arcade connecting everything. There is even an area to drop patients off who are arriving by car or motorcycle. Amazingly, a large number of patients arrive to clinic on the backs of the motorcycle taxis here called piki-pikis. Watching a nearly paraplegic patient load onto one of these as one two passengers in addition to the driver can be a bit nerve-wracking to the say the least. But this is everyday life here and what people go through to access their medical care. It is a constant reminder for us all that these are struggles that most of us, but unfortunately not all, do not have to encounter at home. There is work to be done far and wide in this regard and we are always grateful to be making a small contribution here.

Amisha and Hannah evaluating a patient

Lindsay and Shaban evaluating a patient

Lindsay and Shaban evaluating a patient

The clinic today was not as busy as it has been at times in the past and we have a smattering of return and new patients who have all be screened for neurological disorders. Our purpose here is not to supplant the government medical staff here providing care, but rather to work with them and provide specialty care that would not otherwise be available in most of Northern Tanzania. That they are allowing us here to practice in their community is not something that is merely a given, but rather a sign of trust that we respect. We all ate lunch together in our vehicle which is something we’ve done here since the beginning as we did not believe it polite to eat in front of the villagers, many of whom may only eat a single meal each day. 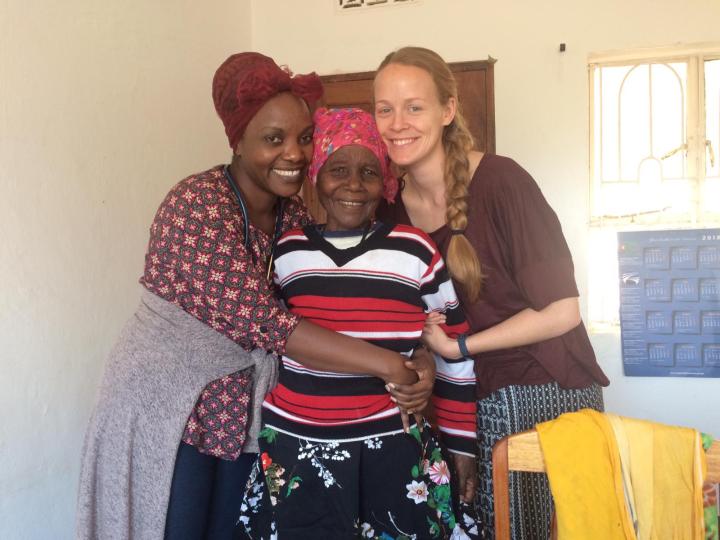 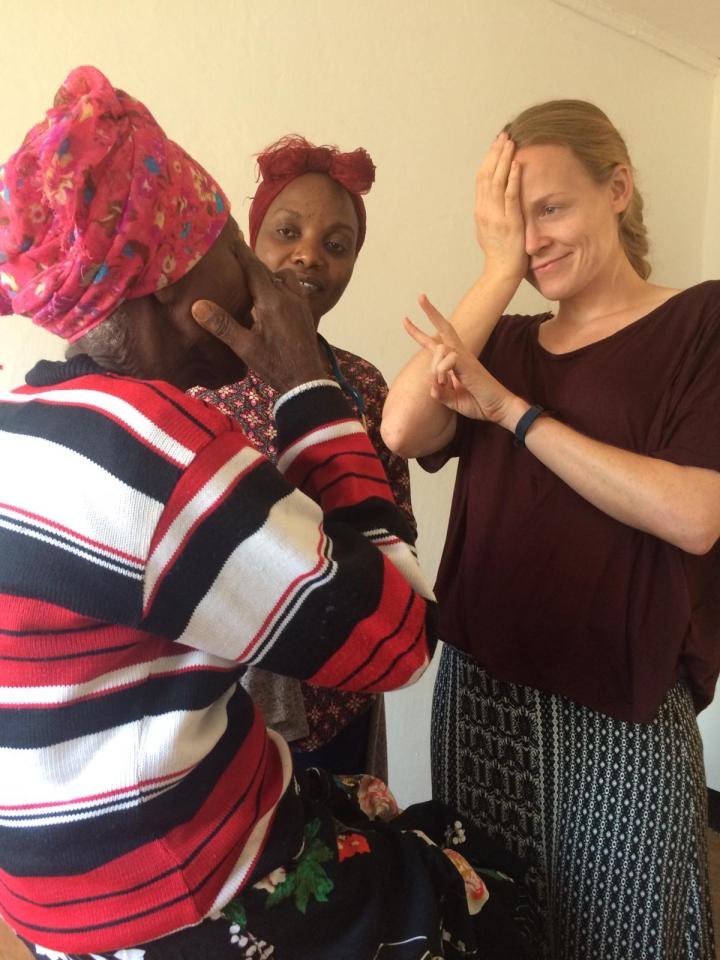 Hannah and Anne evaluating their bebe

It was their well-baby visit day so there were very many cute babies here (making Amisha and everyone else very happy), all being weighed in their traditional manner, strapped into their personalized harnesses that each of their mothers sews for them, and then attached to a general produce scale. Some babies cry vehemently while others seem to just take it in stride, though most are in the middle, of course, reaching for mom with a clear sense of uneasiness in their eyes yet somehow managing to hold it together for the few moments it takes. These visits are a regular occurrence for them so I’m sure some of them have become accustomed to this ritual. This was all occurring outside of the room marked “vaccination” which Amisha found to be a great advertisement for this incredibly necessary process which is taken very seriously here while at home in the States that very small fraction of children who do not get their vaccinations, mostly for misguided reasons, has been increasing of late. 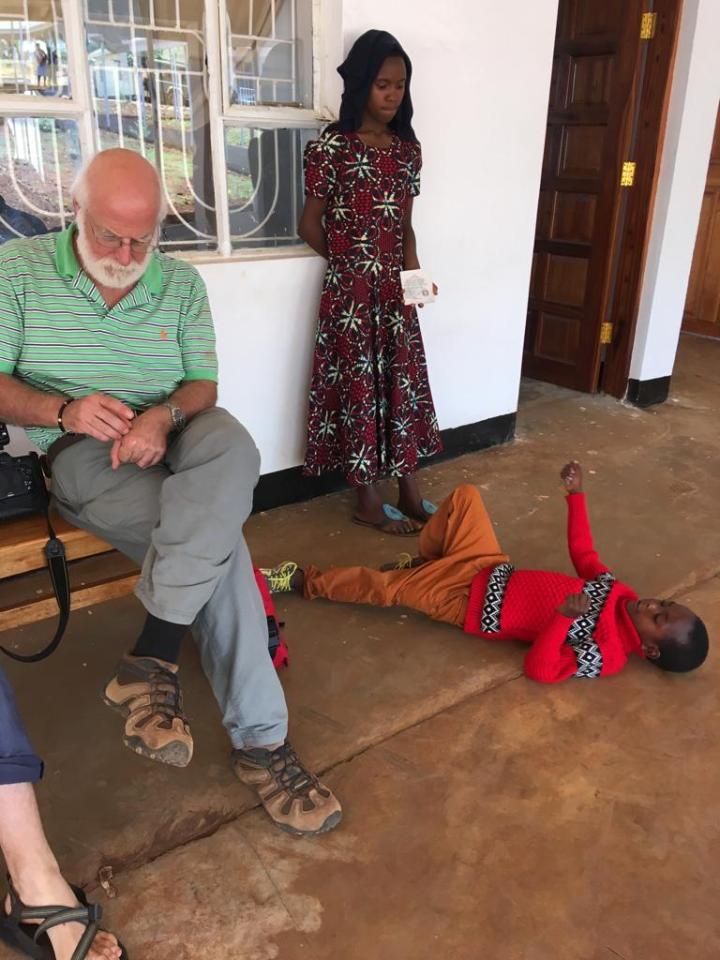 One of Amisha’s patients rolling on the ground. I was trying to ignore them

We had seen our general mix of patients, headaches and epilepsy along with a few arthralgias, before lunch and still had several patients to get to after lunch who had showed up through the morning. The last patient we saw, though, was perhaps the most complicated. He was a gentleman in his thirties who came to see us in a wheelchair because he was unable to walk due to lower extremity “pain.” It is always so difficult from a cultural standpoint here when taking a history as what seems to be the main complaint isn’t always necessarily the case. I have many similar patients here were the main complaint is “pain,” but in actuality their examination belies a much different neurological process. It turns out that this gentleman has lost most of the use of his legs, with no effects in his upper extremities, about ten years prior and had never been evaluated medically other than by the district medical officers he had seem, mostly for other routine illnesses that they had treated.

Getting the weight on a child 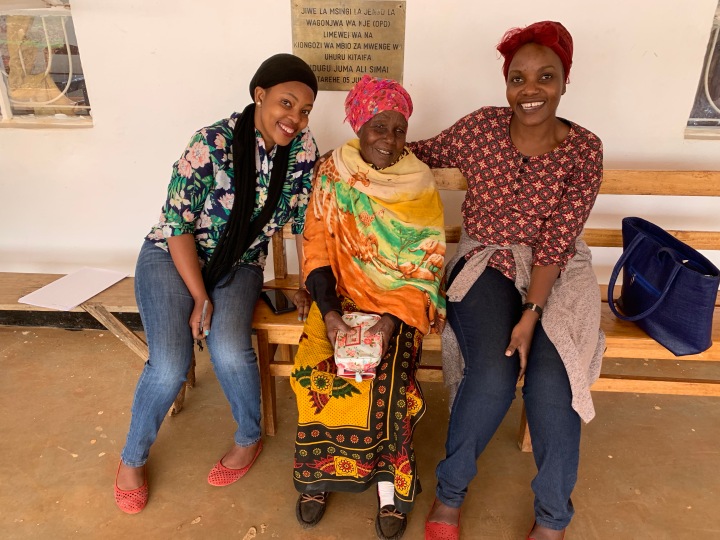 Angel and Dr. Anne sitting with a bebe

In all fairness, this wasn’t something that a clinical officer or even an MD with a general background would have likely been able to have figured out given there is so little neurological training here other than what we bring or can be found at only some of the medical schools. His examination was myelopathic (meaning that he had a problem somewhere in his cord) as we surmised even before Lindsay had first tapped on one of his reflexes. The process, though, had occurred gradually over several years and was purely motor as the predominance of his sensory examination was fully intact. Without a sensory level, though, we were unable to tell exactly what level in the spinal cord we were dealing with, but it was clearly thoracic in nature. Going over the various possibilities of a spinal cord process that had occurred gradually over several years, was pure motor in nature, and had also had some subtle fluctuations early on, there seemed to be very few things we could come up with other than possibly a dural arterio-venous fistula of the spinal cord. Having pure motor findings with this entity is more the exception than the rule, but there was little else we could come up with for this gentleman and, perhaps more importantly, nothing that we could do to make him better at this late date. We had spoken to him about obtaining an imaging study, but it would likely make little difference for him and a CT scan, which was much more “affordable” would be far less helpful than an MRI.

Lunch in the vehicle

Lunch in the vehicle

Though we tried to explain to him what our thought processes were, in the end, the answer was the same, that very little could be done other than to make him more comfortable by using a medication such as baclofen for his spasticity which we prescribed. In the US, he would have most likely been seen very early on and eventually referred to a tertiary center where he would have undergone vascular imaging and eventually had an interventional process to hopefully fix his problem prior to it having caused permanent deficits. Even in the best of hands, though, this isn’t always a sure-thing and it is also possible that he would have ended up with the same deficits that he has currently.

The entire team at Kambi ya Simba

We left Kambi ya Simba in the mid-afternoon to make our way slowly back to Karatu, once again traveling through the gorgeous countryside that we had traversed earlier in the day. We dropped all the FAME employees in town as it was approaching 4:30 pm, and we drove back up the FAME road to our home for the month with our dinners awaiting us on the counter as they do every weekday. Tonight’s dinner was veggie wraps with delicious hummus and very much appreciated by everyone. Tomorrow we would be heading off in another direction, north towards the town of Qaru, near Endabash. 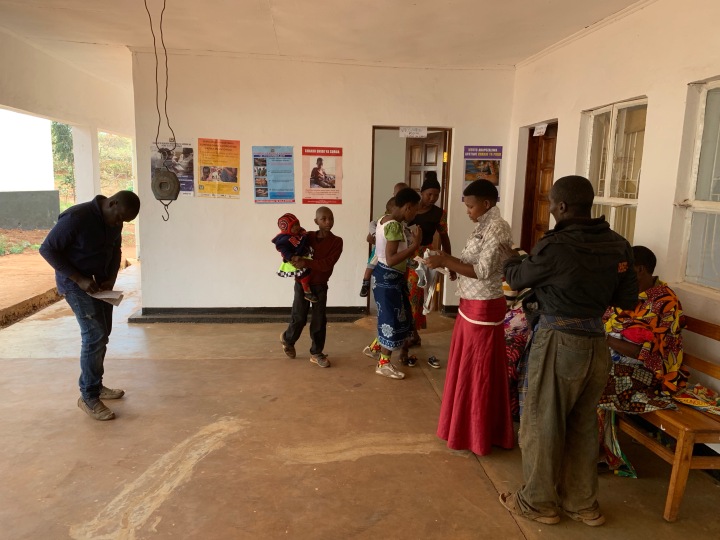 Some of the well babies being weighed