Dr Mike and a new friend

Dr. Mike and a new friend

It was Tuesday so it was our turn to give the educational lecture this morning and Lindsay prepared a talk on neurological emergencies using the patient with venous sinus thrombosis as a case study since she had so many of the key features that would be considered emergent. The talk was very well attended and Lindsay did an excellent job which is sometimes difficult here given the nature of the what we are actually doing here (neurology is a pretty touchy feely topic at times). Using the case that we had admitted the day prior made it totally applicable and far easier to relate. She did her talk in the allotted time and covered everything that she had planned in that time.

Our patients registering for clinic

Dr Anne learning how to do occipital nerve blocks

Morning report was next and we heard about our patient and how she had done overnight. Her seizures had stopped the night before with our phenytoin and she was awake, but still fairly encephalopathic which is not surprising considering she had been having near continuous seizures the day before, as well as a new stroke, albeit small. Just the fact that she was no longer seizing and was somewhat awake was pretty much of a miracle as far as we were all concerned. We were keeping our fingers crossed though, as we all knew there was still plenty that could go wrong and we had little in the way of anything to offer should she have a complication.

Arriving at clinic, it seemed that we had seen many of the patients who had come the day before and so there were fewer that had been bumped to today. Patients lined up, of course, to be seen and we began our process of getting everyone through for the day. We again planned to use three stations and interpreters/clinicians for the morning until all the patients had been registered and then would expand to the four stations. The desk we used for the fourth station was the same one that was being used by Angel to register patients, so when she was finished we moved the desk into the entrance area for the emergency room and we were good to go with four teams seeing patients. We had never had to do this before, but our volume this time seemed more than sufficient to warrant it. 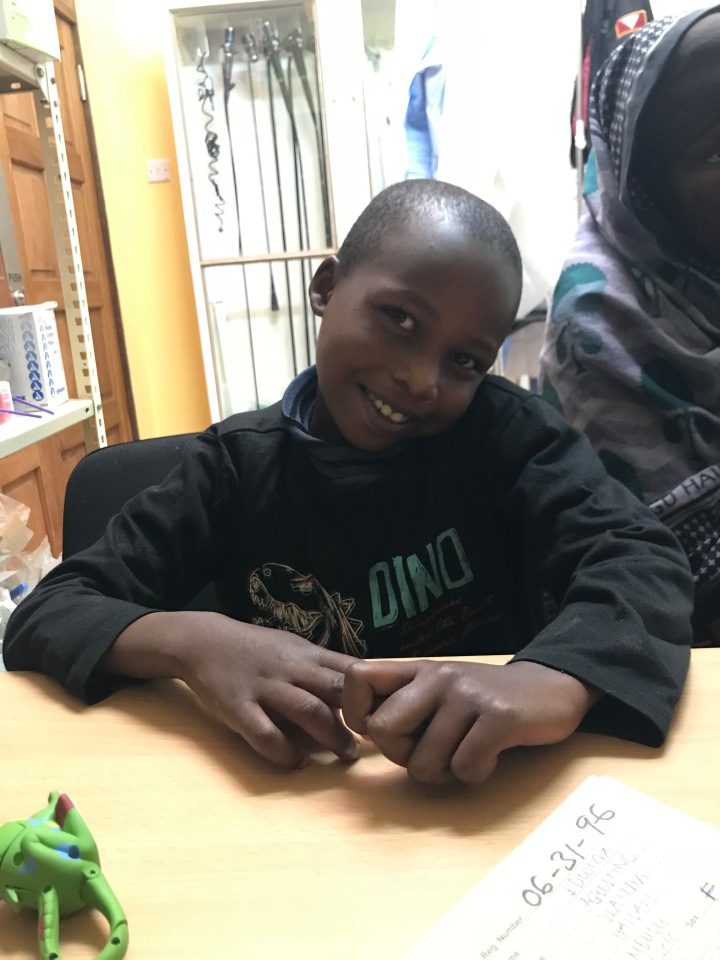 One of our neurology patients

Many of the patients that return to clinic each day have been coming for many years and a number of them were seen by me as far back as 2010 when I had first come to FAME. One of these patients is a lovely young woman who I had originally seen in 2011 with uncontrolled seizures and who has been on several medication trials, but is now doing remarkable well with her seizures, so much so that she is now second in her class at school as a fifteen-year-old. She has come religiously each and every time that I have been here and has been the model of a compliant patient. It is always such a pleasure to see both she and her mother each time they come to clinic.

Sitting outside with Daniel Tewa

Our entire group having coffee with Daniel Tewa

Our clinic finished a bit early today so that we all had a chance to get home and relax a bit before heading off to dinner at Daniel’s. Daniel Tewa is someone who I have known from my first visit to Tanzania when I was here on safari with my two children and was volunteering for a few days in a school very near Daniel’s home. We were helping to paint the school and as Daniel was one of the village council members, he came out and worked with us on the project. He is also the local historian for the Iraqw tribe and has safari companies bring guests to his home to tell them about the history of this area and his tribe where he demonstrates local dances and also shares his traditional Iraqw house with guests and often scholars who have come to study it. I had always remembered Daniel from that visit and when I returned the following year to work at FAME, I contacted him and, amazingly, he remembered me and my children (including their names) from the year before. I was invited for dinner and since that time, Daniel has been gracious enough to have us visit with him and his family and share a dinner. I have done this on every subsequent visit to Karatu and he constantly reminds me that I am a member of his family and that his home is mine. He is a wonderful man who has raised eleven children of his own and one adopted and has sent then all to college. His knowledge of the world and world affairs is impeccable and yet he has never traveled outside of the country.

After our visit to the Iraqw house

When I texted Daniel to arrange for a visit and told him there were seven of us, his comment to me was that was only half the size of his family and so not to worry, we were welcome for dinner. After we arrived, we sat under some trees in front of his house which is where he entertains, and had true African coffee. It is boiled with fresh milk from his cows and is absolutely delicious. We went around the circle for everyone to tell him what state they were from so he could tell us facts about the state that even we did not know. We eventually meandered over to his Iraqw underground house which he built in the 1990s as an example as these houses had been destroyed years prior when the government declared that all 126 tribes in Tanzania had to move into villages rather than remain separate as they could not develop an infrastructure otherwise.

The house he built is smaller than the one he had grown up in, but the design is the same. Large families lived in these houses to protect themselves and their livestock at night primarily from the Maasai who would often take their cattle. The Iraqw and Maasai were at odds for many years and it was not until 1986 that they finally signed a treaty that had been forged by the prime minister of Tanzania who was a Maasai. The house has room for one family to sleep, about a dozen cattle, and food storage, preparation and cooking. In this house, there is one large granary, though there would be several in a larger house. The house forms a dome that is several feet high and is covered by dirt and grass, while underneath this roof there is a layer of leafy material that is a natural insecticide to protect the structure below. This house has sat here since the early 1990s without a leak or damage until about two years ago, when two elephants walked across the top of it and caused one of the beams to break. Otherwise, it has lasted for over 25 years and has served to as a monument to the Iraqw culture and tradition.

It had now become dark so the group walked back over to Daniel’s present day, Bantu-style house to go inside so he could show us the wedding skirts that Elizabeth, his wife, continues to make for family and for sale. They are an incredibly lovely affair that are made out of dyed goatskin and heavily beaded with stories of marriage, children and life in general. These would be worn by the bride on her wedding day and she would be escorted by her family in front of the elders of the village. The skirts were worn topless and the bride would be decorated with many beaded necklaces and other jewelry. In Africa, as it is many, many parts of the world, a woman’s breasts are not considered private.

Daniel brought out several wedding skirts along with a daily-wear undyed goatskin skirt that Lindsay wore, while Amisha and Hannah modeled the wedding skirts. He told us all about the wedding ceremony and then taught everyone how to dance and celebrate. The best was the drumming in which the skirt is held taught across the thighs while kneeling and forms the drumhead. The drummer sits on a large pot that is held between the legs while kneeling and serves as the resonator. It worked incredibly well as a drum and was an amazingly effective set up. Daniel first demonstrated the drumming followed by Lindsay while everyone else danced and sang. It was a pretty special moment.

Hannah being “escorted” down the aisle

It was time for dinner and so the group began to walk from Daniel’s farm to Isabella’s house. Isabella is the oldest of his 12 children and is a teacher. His other children are all scattered around the country primarily working in various cities for the government or are privately employed. Isabella’s house is much more modern and much larger than her father’s so it easily managed all of us sitting in the front room where they served us shish kabobs of the some of the most tender beef I have ever tasted along with vegetables that they grilled outside. We then sat down at the dining table to enjoy an incredible meal of vegetables, rice, beef and chicken. I think a mashed pumpkin dish was everyone’s favorite, but the other dishes were all equally delicious. If each of us didn’t have seconds on our own, Daniel would be sure to make us do so and everyone had their fill and then some.

And if this spectacular dinner wasn’t enough, Isabella then brought out a desert that resembled bananas Foster with pineapple and equally scrumptious along with watermelon slices. At this point, everyone was more than full, but the deserts were too amazing to ever think of passing up and, again, Daniel was there to make sure that everyone’s plate had something in it. And when we thought that everything was finally over, Isabella brought out a platter of drinks that included beers and Stoney Tangaweezi (our favorite ginger ale here). There was no way that any of could consider finishing an entire drink so we split them between us otherwise I don’t think any of us would have been able to move.

We walked back to Daniel’s house in the dark, all feeling not only full with our incredible dinner, but also with the experience we’d had as it was clear that Daniel and his family had treated us not only as honored guests, but also as visiting family. This is why Tanzania has become my second home. Even though we are here to help and have volunteered our time to improve the health of this community, we are treated as family rather than visitors by everyone and we have never felt like outsiders. They are gracious and loving and it is impossible not to fall under the spell of this amazing country.