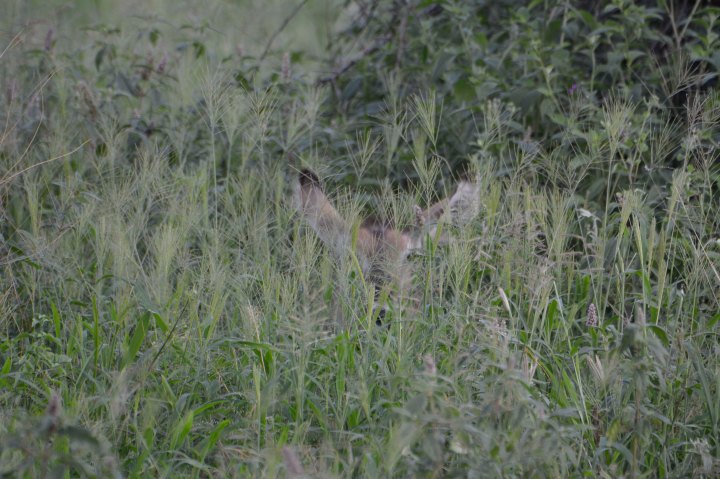 Waking up in a safari lodge or safari camp is an exciting proposition, no matter how you look at it. There is an air of anticipation and expectation that is hard to describe as there is really only a single purpose sitting in front of you and that is to see as many animals as you can during your game drive. There is always the hope to see the big cats – the lion, the cheetah and the leopard – and perhaps even a black rhino. There are no rhinos left in Tarangire, of course, long since having vanished due to overhunting and now only seen in the Ngorongoro Crater and the Serengeti. The black rhinos have been endangered now for many years, almost hunted to extinction (read Hemmingway’s The Green Hills of Africa for a sense of what it was like early last century), while the white rhinos of Southern and Southern Central Africa are quite numerous. The white rhinos, a misnomer that it refers to their color as it is actually is a misinterpretation of the Dutch word for “wide” referring to their broad lower snout, are quite easily spotted given their numbers in the wild, while it is something very special to see the black rhinos of Tanzania given their endangered status. So today, we were hoping to see the cats, but also knew that we’d see lots and lots of elephants.

We had a lovely breakfast in the mess tent that included eggs to order, bacon, cereal, fresh fruit and fresh fruit juices. Of course, there was also the wonderful coffee that you find here, freshly brewed and delicious. Once we were done with breakfast, everyone loaded up in the Land Cruiser, packed with everything we’d need for the day along with a huge picnic lunch in a basket that the lodge had prepared for us. Susanna sat up front with Yusef while the rest of us remained in the back and we all stood to get the best view possible. Once through the park gate, we very quickly saw several interesting sites. First, there was a recently killed and only half eaten male impala just off the road with two jackals scavenging it. They were a bit skittish of us and very slowly left the scene of the crime as we remained watching them. We would pass by the completely striped carcass picked to the bone by vultures later that evening. The second thing we saw almost immediately upon driving were two beautiful lesser kudu that were like a blur as we startled them and they ran across the road in front of us. I have never seen a lesser kudu in all of my dozens of trips here and it was a special sight for certain. 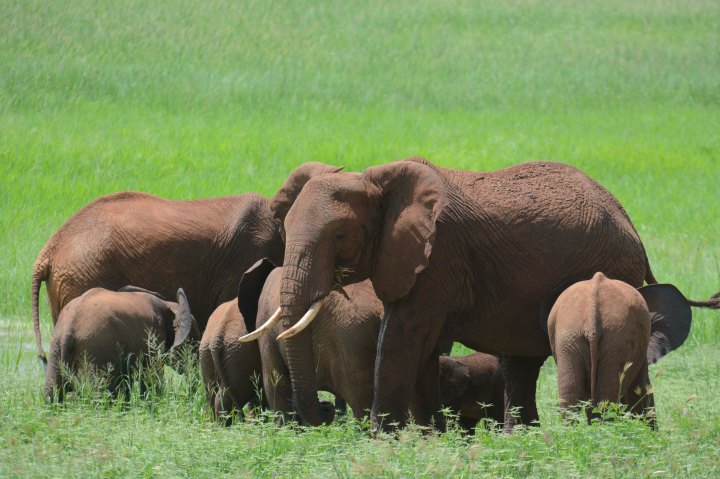 We had traveled for some time and I had thought that perhaps we had actually avoided the onslaught of the tsetse flies, but alas we suddenly realized that we had a number of them in the vehicle with us, as well as a cloud of them following behind. They are an incredibly efficient predator, as they seem to operate like guided missiles that don’t give up until you have either swatted them dead or they have scored a bite. They are actually silent as they do not buzz and, though, they are actually quite slow in flight, they seem to maintain the same speed as our vehicle so there is no possibility of out running them. The tsetse is a blood sucking fly that if given the opportunity will fill it’s belly with a meal, but often is disturbed partway through so will move on to another victim to finish filling up. On numerous occasions, I have killed these little devils after they have flown up my pants undetected and when I finally feel them crawling around and crush them, I have a large bloodstain on my pants. The problem is that it is usually not my blood and more than likely that of some animal prey so there is that bit of gross out factor of having some Cape buffalo’s (or any other animal on the plain) blood all over my leg. 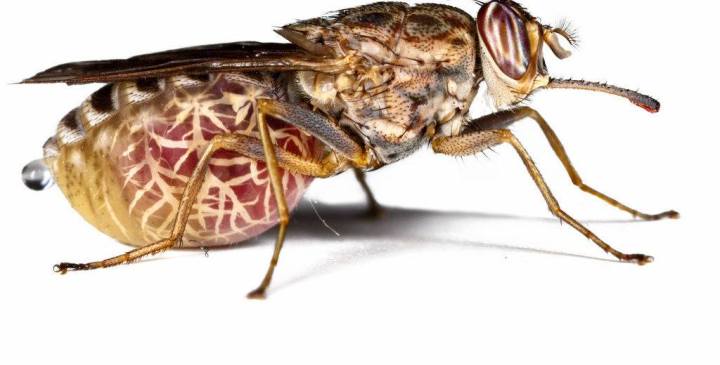 Our nemesis, the tsetse fly

In short order, the flies had everyone in the vehicle in rapid disarray trying to swat them away before they bit each of us, which leaves a nasty, itchy welt wherever that may be. I usually bring a number of animal books along with us to use as reference while game viewing, but these served more to use smashing the tsetse against the windows (most effective) or against someone’s leg, back or head (least effective). There was an agreement that any hitting or slapping that involved a tsetse fly was fair game as it was far less painful to be hit by each other than it was to be bitten by a fly. The flies were thick primarily in the woodlands and once we got through this region and finally approached the river, the flies began to thin out and everyone could once again focus on the game drive. 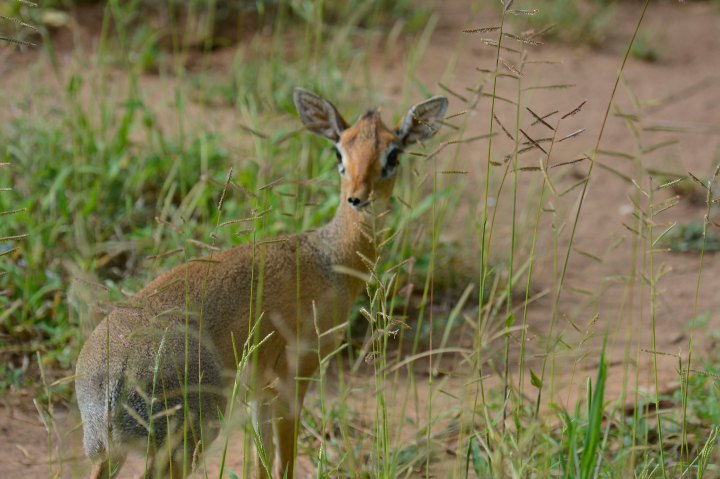 Shortly after reaching the river, Yusef learned from another driver that there were some lions sitting in a tree very far south of where we were, but since we had come to see them, we began driving a bit faster in that direction and after perhaps 45 minutes of hard driving we came upon two lionesses and a cub comfortably sleeping in an acacia tree. As we sat and watched them, they moved around and readjusted several times, but always went back to their basic stance of being laid out on the large branch, seemingly without a care in the world. From there we traveled down to the Silela Swamp, an area at one end of the park where there are often large herds of elephants and Cape buffalo. There is a picnic spot here along with much needed bathrooms and after a short stop, we drove along the edge of the swamp, but only found a few elephants here and there. We did spot a lone hippo with a baby and a number of birds. Two of the coolest sights, though, was a very large and gorgeous Nile monitor that was probably at least three feet in length and incredibly colorful, and some dung beetles working their hardest to roll a large ball of dung up a small embankment. They kept getting halfway up and then having the ball roll back on top of them. It was clearly a Sisyphus moment as we watched them do this time and time again and couldn’t help but feel sorry for them. 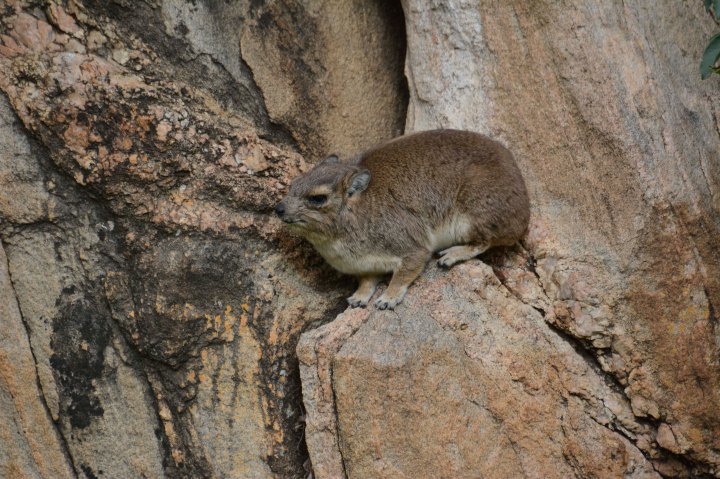 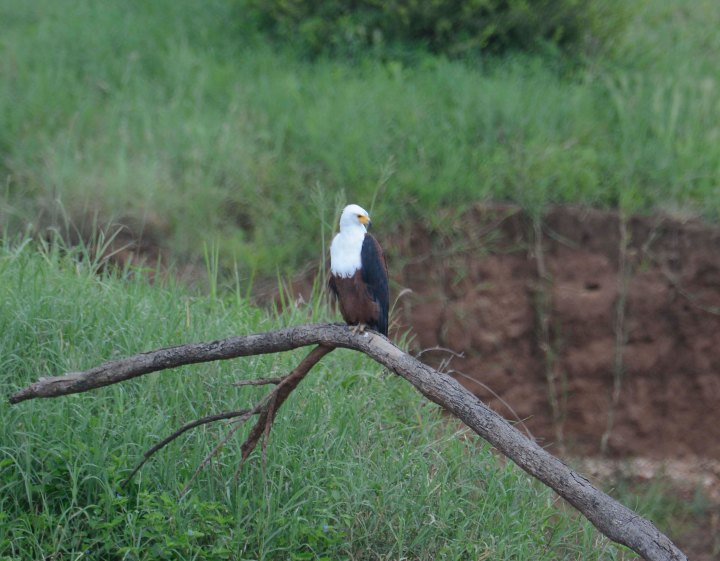 Not seeing much at the Silela Swamp, we drove back over the hill towards the river and traveled up about half way, until we reached one of the river crossings to get on the other side where there was a new picnic area. Lunch was scrumptious with cooked chicken in a broth, rice and pasta with sauce. There were also samosas. This was not the typical box lunch one gets on safari (which isn’t bad so don’t get me wrong), but rather a gourmet lunch on the road. I took a short nap on one of the cement seats for the tables, just out of the sun, but it was still quite warm during the middle of the day.

After lunch, we made our way along the river and were heading towards an area along a smaller creek where there are often leopards, but were unable to find any in the trees despite driving very slowly along the road. Mindy noticed lots of lion paw prints in the sand as we drove along, but we didn’t spot any additional big cats for the remainder of the day and spent most of the time watching the hundreds of elephants that we ran across with loads of babies, some only weeks old. Elephants are still the most majestic animals to watch in my mind, as for all the excitement of seeing a cheetah, leopard or lion, it is the elephant that really demonstrates the most social interaction and is the easiest to watch. They are graceful despite their size and just fascinating to watch.

Ostriches in the road

We ended up at the main gate at around 5pm and still had at least an hour or so of driving to get to the southern gate and our lodge, much of which was going to be back through tsetse country, having once again to fight off our arch nemesis and to maintain our sanity. Our windows were already scattered with the dead remains of flies we had smushed with our books and the floor of the Land Cruiser had more intact bodies of those flies we had smacked against each other’s skin causing far less mutilation of these pests, though that was clearly not our intention. The Geneva Conventions did not apply in this form of guerrilla warfare and we were taking no prisoners.

Finally home, all I could think about was getting back in that pool and ordering a drink, so we practically ran to our tents, or at least I did, changed into my suit and headed off for the incredibly refreshing dunk that I had been thinking about for at least a few hours. It was clearly worth the wait as the water was just a bit cooler this evening and sun was lower than it had been yesterday when we got in. I immediately order my Amurula colada and just enjoyed the quiet of being in the middle of Africa in a pool watching the sunset. It would be difficult to imagine a more relaxing situation that I have experienced in the recent past, but this was certainly among the very best of them without question. We eventually made our way from the pool back to our rooms to prepare for another delightful dinner. The skies were not as clear as they had been the night before, so stargazing wasn’t quite as fruitful. We had decided to begin our day tomorrow a bit earlier than today, much to Johannes’ chagrin as we had to convince him that there was indeed the possibility of seeing more if we left earlier. Somehow, I’m still not sure he was convinced, but he went along with it like a good sport, so everyone went to bed a bit early with thoughts of more animals to see tomorrow.