Tuesday mornings at 7:30am have traditionally been reserved for volunteers at FAME to give a lecture on a topic that would be useful for the doctors here to help with their practice. We have obviously repeated many of the topics, as there are only so many general neurology topics for us to cover for the practitioners here. Remember, most doctors here have never worked with a neurologist, often even in medical school. In all of Northern Tanzania, there is one neurologist currently at Kilimanjaro Christian Medical Center in Moshi, and up until several years ago, the neurologist there was not fulltime. Never having worked with a neurologist, or ever having seen a neurologist perform a neurological examination would be a huge disadvantage in caring for these patients as our specialty is so driven by the history and physical examination rather than testing. I so enjoy teaching the neurological examination to medical students and residents and can still remember all of my mentors as I was training. I cannot imagine not having received that wonderful and empowering knowledge of the physical examination from these superlative teachers and then having tried to go on and do what I do today. Having had to learn it form a textbook or even from a non-neurologist would not have been the same and I’m not sure I would have chosen neurology as a career had it not been for that long line of mentors that began in medical school and continue even into the present. 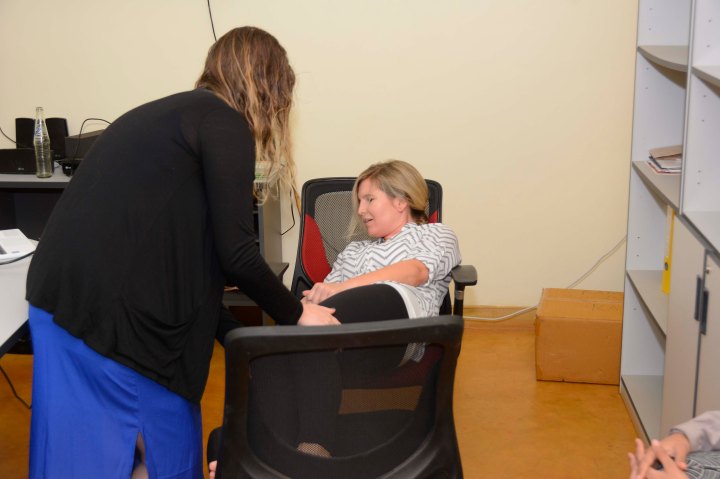 Susanna and Susan chose to speak about epilepsy this morning, and though we have given lectures on this topic several times before, it is always presented in a slightly different manner and always contains new information for the doctors here. They can never learn enough about this topic that is so prevalent here in Sub-Saharan Africa, likely due to the frequency of childhood illnesses and trauma that are also so prevalent and increase the risk of developing epilepsy over ones lifetime. That being said, when Daniel Becker brought her EEG machine here in 2015, we found many patients with primary generalized epilepsy that is more commonly genetic in nature rather than symptomatic. Their lecture this morning was organized around taking a seizure history and what information is important to ask when evaluating a seizure patient. To do this, Susanna gave an academy award worthy performance of a patient having a focal seizure progressing into a secondarily generalized seizure and then the two of them launched into a discussion of what the doctors had observed and what questions they would ask of a family member who had possibly observed the event. It was really a very helpful discussion and, though it usually hard to get the full participation of the often doctors here (it is also quite early as these talks commence at 7:30am), I thought they did a wonderful job of garnering their attention so there were many great observations and questions. Or perhaps it was just the shock of having seen Susanna have a full-blown seizure right in front of them that early in the morning. Regardless, the lecture was well received which is usually determined by how long Dr. Msuya allows the questions to go on after the lecture which has usually gone over the allotted time cutting into our morning discussions of the ward patients (sit down rounds). 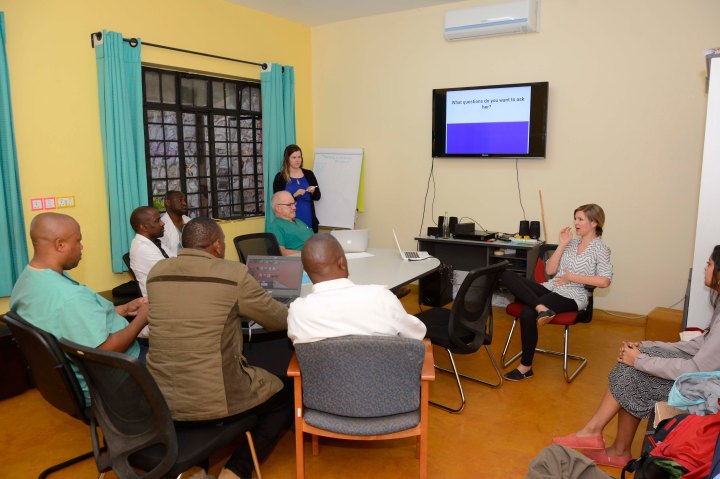 Patients this morning this morning were quite varied and one of Susan’s first was a young three-year-old child with developmental delay, macrocephaly and seizures. The child clearly had frontal bossing (meaning their forehead was quite pronounced and bulging forward that is seen in children with hydrocephalus and increased intracranial pressure) and, perhaps even more significantly, had what appeared to be bilateral sixth nerve palsies, meaning that his eyes both inward leaning due to the loss of the lateral rectus muscles supplied by the sixth nerve. The significance of the sixth nerve palsy is that it is the nerve that has the longest intracranial path and is frequently stretched or injured in patients with increased intracranial pressure. The baby looked very good, but we definitely had concerns that they might still have active hydrocephalus that might benefit from a shunt. This is the one neurosurgical procedure that is easily available here and so, if present, we would definitely want to know about it as we could intervene. 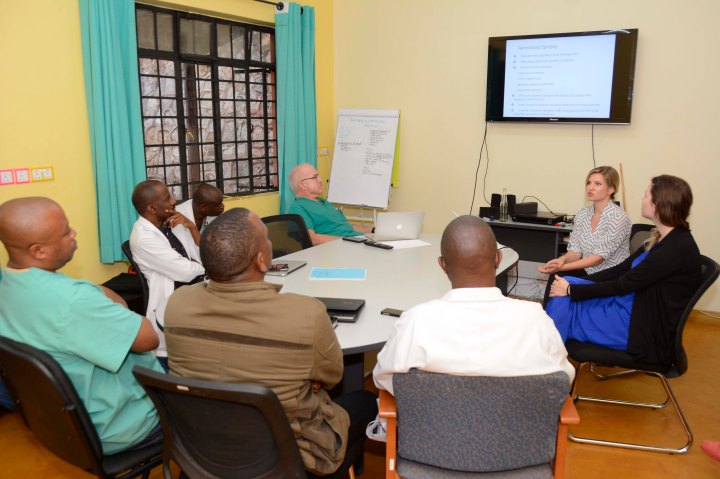 Radiology (and other procedures) are not covered in our “all-inclusive” price for the neurology evaluation (5000 TSh or less than $2.50) which includes blood tests and medications for a month, so having a discussion about obtaining a CT scan that costs just shy of $100 USD can be very difficult. FAME does not turn away patients who cannot pay, but they do charge for services as to open an entirely free clinic here would be unsustainable as you would soon be taking care of the entire population of Northern Tanzania, and perhaps further away, as everyone would flock from every corner of the country to come. There is a very delicate balancing act here between maintaining some status of fee for service, although that is not even sustainable without significant outside support, and making sure we provide treatment for those in need. Thankfully, we have Angel here, who can help sort things out in these situations. We presented the options to the family and our recommendation that the child undergo a CT scan of the head to look for hydrocephalus. There were very open to the idea and understood our concerns, so we proceeded to get the baby ready for the CT scan, which is not a small undertaking in a toddler. They are no quieter than an infant and are less manageable as they are much stronger. We sedated the child after an IV was finally place and put them on the CT table, but as they went to inject the contrast after the plain scan was done, the IV was found to not be working and we were only able to complete the non-con study. 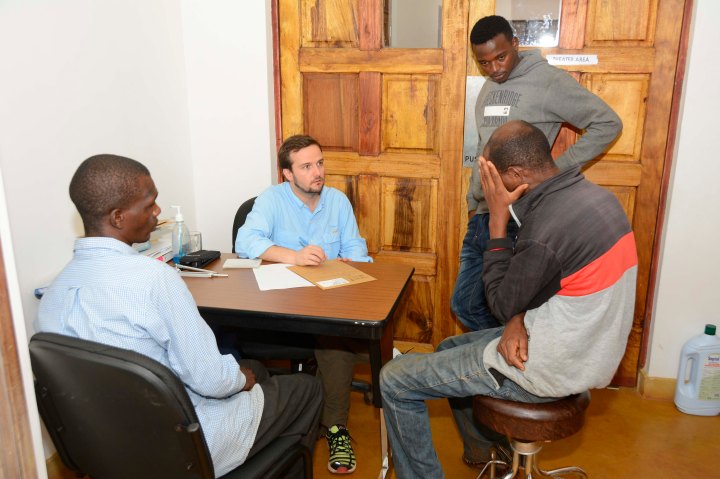 Johannes and Baraka evaluating a patient

The child didn’t have overwhelming hydrocephalus, but the scan was also not normal. There was asymmetry of the ventricles that were larger than they should be and this seemed to be more consistent with arrested hydrocephalus, though, the sixth nerve palsies still worried us. Susan sent images from the CT scan to the US for one of the neurosurgeons at CHOP to review and would hopefully get back to us with some guidance shortly. 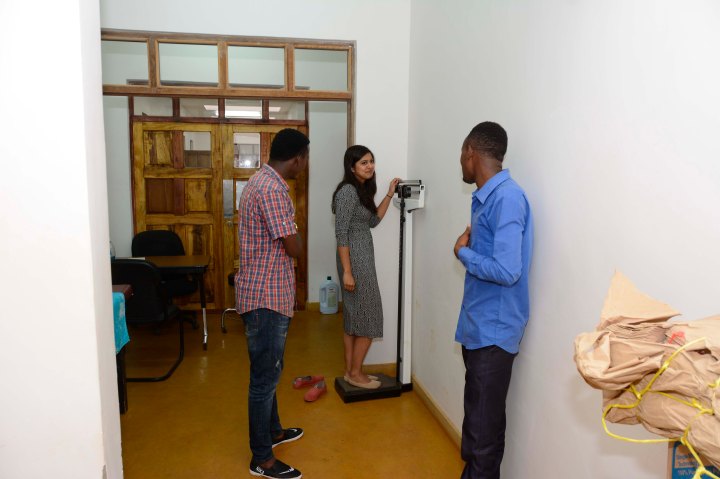 Caught in the act… as Baraka and Emmanuel look on

Sometime after lunch, Frank came over to tell me about a patient who had come with her family from ten hours away and who had been seen yesterday with complaints of left arm pain. He had injected her, but her pain continued and she had come back to take care of some other medical issues. He brought her over and asked in typical Frank fashion if he could consult with me on a “neuro-orthopedic” case. After I heard the story, I took my normal course of action, which is to deny any and all accountability, for his patient or the “non-neurological” problem she would very likely be suffering from. As she walked over in my direction, I immediately noticed that she had a very distinct and unquestionable drooping of her left eyelid. For a neurologist, this is a very, very bad combination of symptoms, perhaps second only to the patient coming in complaining of twitching in all of their muscles and who happens to be a “really nice person,” as they will usually have amyotrophic lateral sclerosis (ALS) or Lou Gehrig’s Disease, a terminal condition from which patients usually die within several years. This patient, though, had a combination of findings that makes us immediately concerned for a tumor, usually lung cancer, in the apex of the lung that erodes into the brachial plexus, or network of nerves supplying the arm, and the sympathetic nerve supply going to the eye and causing a Horner’s syndrome. 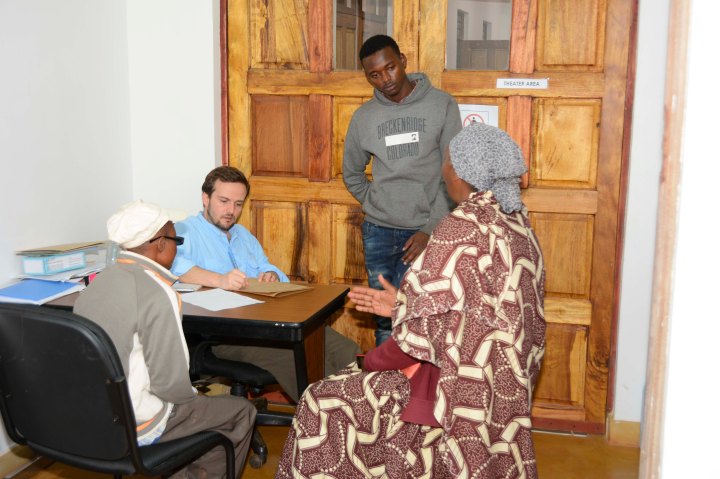 Johannes and Baraka evaluating a patient

As soon as I walked in the room with Susanna and Mindy and said they were going to see patient with arm pain and a drooping eyelid, they both immediately knew what to be concerned about. The woman had had the symptoms for about a year or slightly less and both the arm pain and the drooping eyelid had begun at approximately the same time, making us even more concerned than we had been before. She had no weakness or other physical findings other than some swelling of the left arm and she had apparently had some surgery in the left axilla about five or so years ago, which was a bit of a confounding piece of information, but didn’t lessen our overall concern very much. The way to diagnosis this problem is, of course, a CT scan of the chest, which will reveal a mass in the apex of the left lung and typically bony erosion into the chest wall as well. When we discussed our concern with the patient and her family member also present, they had very little hesitation whatsoever in what was necessary to do, so we prepared to do the CT scan in very short order. I looked at the scan myself and couldn’t really see much of anything, but I will be the first to admit that CT scans of the chest are absolutely not my forte and not even close, for that matter. We would have to wait for the radiologist back home and who is reading FAME’s CT scans to look at the films and get back to us and this would be some time due to the time difference. 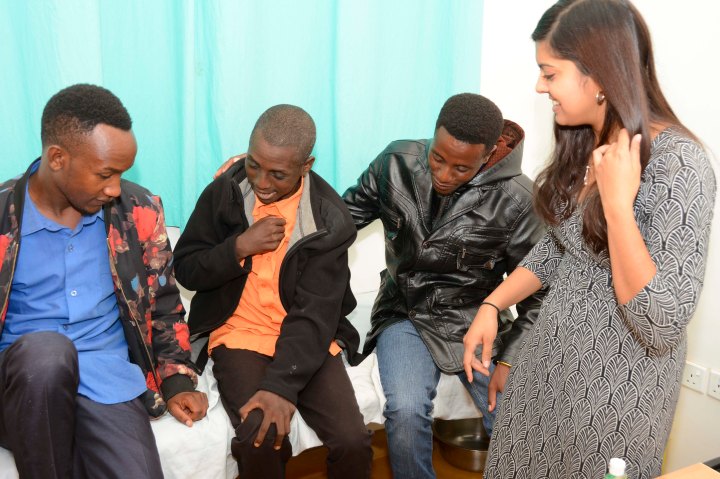 Mindy and Emmanuel examining a patient

We eventually received word that the there was no mass in the left lung apex, but he did see some questionable inflammation in the left axilla and this, unfortunately, could merely have been residual from her prior surgery. I’m really not certain we were able to get an answer on this one, which was very frustrating to all of us, and especially Dr. Frank, who keep asking me “well, what’s next?” I didn’t really have a very good answer for him and, as usual, he was less than thrilled with this fact and, somewhat jokingly, probably wonders what good we are at times. All joking aside, though, we are often limited in our ability to explain everything, and that includes being in the US, where we can do a multi million-dollar workup and still not have the answer. Here, it is much more common as we do not do things just to find an answer, but rather to benefit the patient, meaning, that if doing a test won’t change your management or the management necessary is not available in this country or not accessible to the patient, then we elect not to waste valuable resources for either ourselves or the patient. 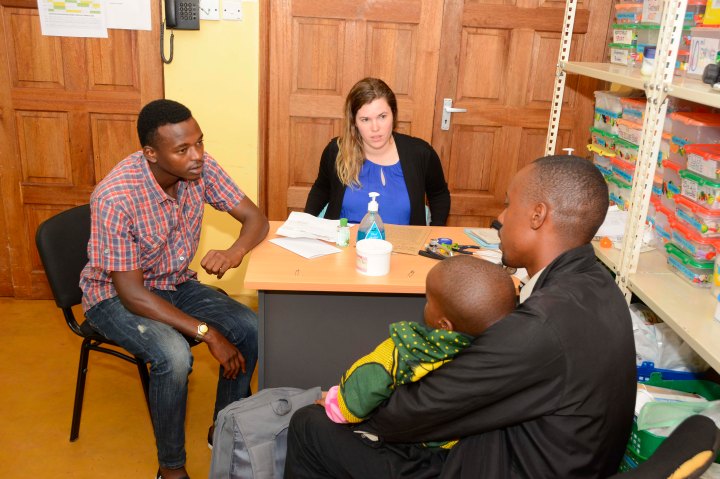 Susan and Baraka evaluating a patient

We finished a bit earlier today and elected to head home to get work down in our wonderful home with it’s veranda looking over the beautiful hillsides in the far distance. Everything is green and plush right now with the changing over to the wet season soon to come in April and May. Tomorrow is a resident wellness day meaning we will work just in the morning and have plans for lunch at Gibb’s farm mid afternoon. That is something that can definitely be dreamed about as I’m sure each of us did that night, heightened to some degree by the effect of the Mallarone each of us is taking that gives you very lucid dreams.