We had decided to do a pre-breakfast morning drive departing before sunrise, which meant we were up quite early in the cool night air. Thankfully, there was some hot water already prepared for us to make coffee or tea before our drive which was fine since we knew there would be a nice hot breakfast waiting for us on our return. The night had been restful even with the often not so distant whooping of the hyenas as they were scrounging through the area surrounding camp. I had heard a male lion with his low rumbling roars the night before, but didn’t hear the same last night. With the coming of dawn, the birds were already quite active with their constant calls. 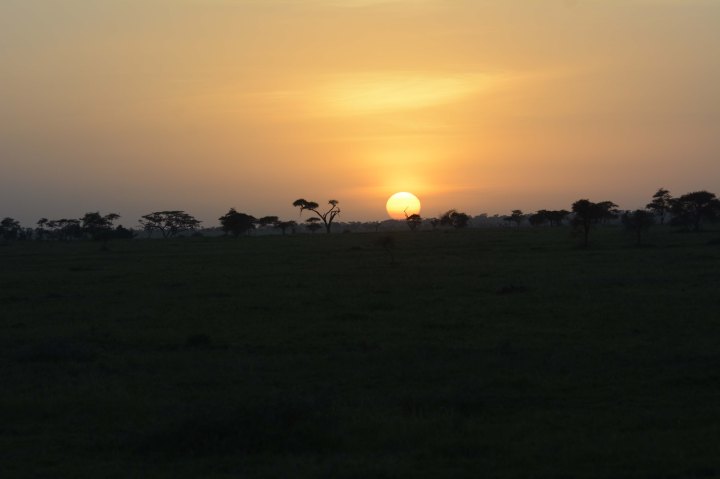 It was cool enough for us all to need either fleece or a shell since having the top up on the vehicle meant a stiff breeze whether you were standing up or not. I always stand when we’re on a drive as it’s my favorite way to view game, though I think the others were mostly sitting and this was probably smart considering my hands were quite cold and nearly freezing from the cold, morning air. As we drove out east from camp, we again spotted groups of wildebeest, though somewhat fewer than yesterday as much of the main herd had moved overnight in the direction of Naabi Hill, where we would be heading after breakfast to depart from the park. We drove from kopje to kopje hoping to spot a kill that was the main purpose of leaving so early. It was also to hopefully catch a glimpse of some animals that you don’t normally see during the day. We had spotted several bat-eared foxes, nocturnal animals, that each quickly ran off to their burrows as soon as they heard us and where they would have been heading shortly regardless.

We were well into the rolling hills and kopjes by the time the sun decided to rise above the horizon and grace us with its warm rays of sunlight though the air remained cool enough for us to remain bundled up. We ran across a small family of elephants moving across the plain heading to an unknown destination. We investigated several kopjes searching for lions, but didn’t spot any this morning much to our dismay, nor did we have the opportunity to see a kill that we had all hoped for. We eventually made our way back to camp at least with the knowledge that we would have another scrumptious breakfast before departing while taking our time to reach Naabi Gate and game viewing along the way. 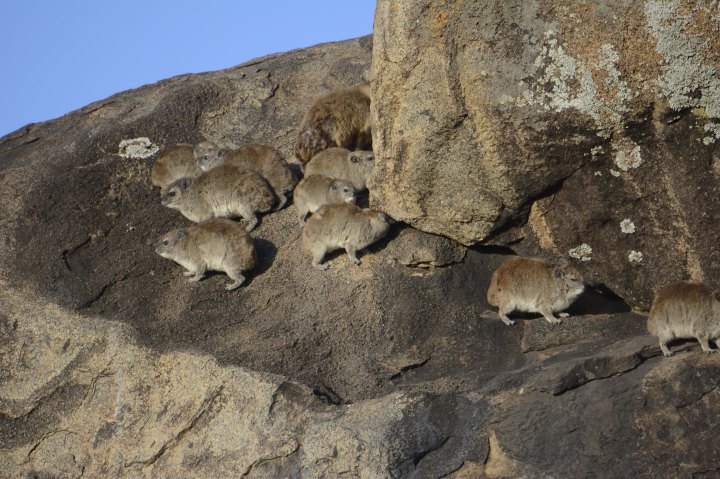 A group or rock hyrax warming in the early morning sunshine

We enjoyed another amazing breakfast consisting of an omelette, mandazi, bacon, sausage, fruit and, of course, tea, before heading off to our tents to pack up. It was certainly tough for us to depart after only two nights there, but regardless, it was still an adventure that would remain with everyone forever. There is nothing that compares to the Serengeti in its immenseness and diversity, both for its wildlife and topography. It is truly unique and a treasure.

On our way to Naabi Gate we still had more to see and briefly spotted a hippo out of the water heading home from its nighttime foraging. There were long lines of wildebeest to our left all along the main road as they were moving about looking for the perfect grass to satisfy them. And along with the wildebeest all about, there was a small group of female lions with their many cubs sitting under tree just on the side of the road. Their bellies were all full so they had clearly eaten recently and Simon had spotted some signs of a likely kill nearby just before we came upon the family so that was the likely source of their meal. 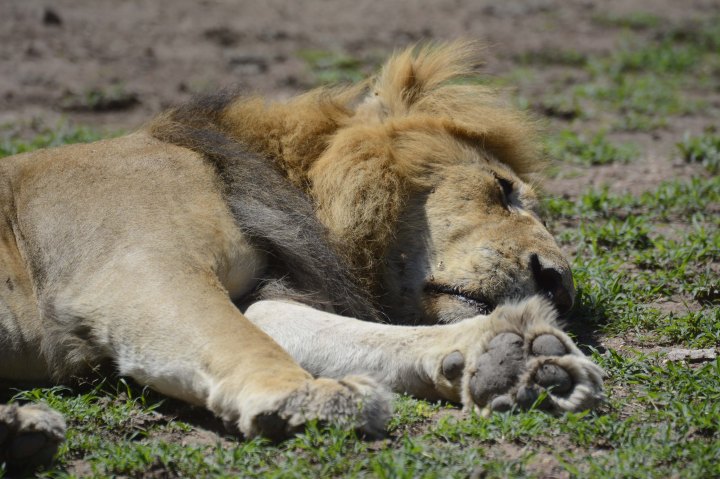 We arrived at Naabi Hill in time to depart the Serengeti well under our deadline as we had 48 hours there with the fees we had paid. No one was yet hungry enough for lunch so we all decided to make the trek to the crater rim and have lunch there after traversing the wide plain that passes by Lake Ndutu and Olduapai Gorge. The story on the correct spelling of this very famous site where Louis and Mary Leaky spent much of their lives, making discovery after discovery, is that it was originally misspelled as “Olduvai” by the first westerner to see it. The area was actually named for the sisal plant that grows there and that the Maasai call “Oldupai.” All the maps in Tanzania and the park that bears its name use the correct spelling as do I.

Once having ascended to the crater rim, we looked for a good picnic site to have our lunch and soon found one, though I’m sure that Simon had already decided where we were heading. There were some log sections scattered in several areas to sit on and two Marabou Storks who stalking around the area looking for scraps. These are seriously large birds that have a rather ghoulish look about them with very long and sharp beaks that would not be fun to tangle with. They stayed at an appropriate distance, thankfully, and were more intimidating than anything else. 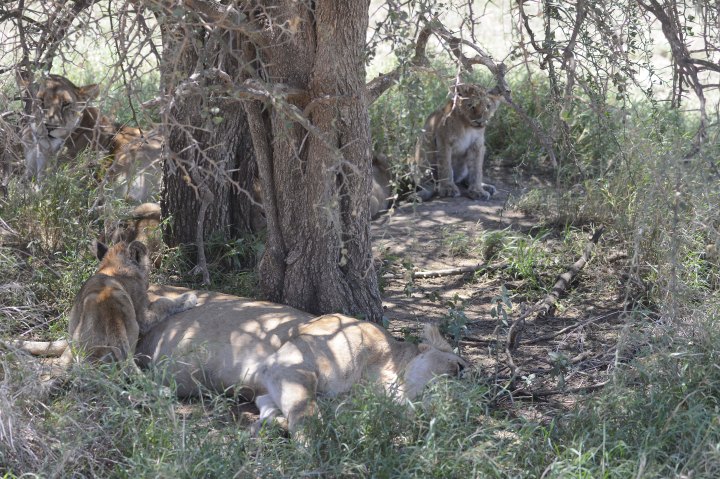 We opened our box lunches from the camp to find a nice array of typical safari food – a cucumber sandwich, a piece of chicken, juice box, cupcake, pasta and a chocolate bar. Everyone was looking forward to the meal since it had been some time since breakfast. I sat quietly eating my piece of chicken, keeping a steady eye on the storks pacing back and forth behind us, to make sure they weren’t going to try something. I had just taken a bite of my chicken and was holding it less than a foot in front of my face when suddenly there was a huge grey blur, a whoosh of air, and I felt the chicken being quickly snatched from my hand. As I looked to my left, I saw what had stolen my chicken and it was a huge black kite with its wings spread soaring off someplace to enjoy his booty that had previously been my lunch.

I should have been aware of this possibility as I have seen these kites dive bomb other unsuspecting victims down on the crater floor at the lunch spot as they can spot prey (or a sandwich) from high in the sky. In fact, we always eat our lunch in the crater in our vehicle just to prevent this occurrence and I had somehow overlooked the fact that these birds would very likely be staking out any lunch spot in the vicinity. Following the event, I was quite calm and merely stated that a bird had just stolen my chicken and which quite impressed Neena as she said that she would have been totally freaked out. Kites are fairly large birds with a wingspan of probably 5 feet, so Neena’s reaction was totally a reasonable one and, for whatever reason, it had just seemed like such a matter-of-fact occurrence to me that I didn’t react. Or perhaps it was that I had seen this happen so many times before that it didn’t entirely surprise me. I hadn’t been injured or even suffered a scrap, so we all went along eating our lunches, though with a bit more caution than before.

Following our lunch, we began our trek around the crater rim once again heading towards the Ngorongoro Gate and, eventually, Karatu. We had planned to have nyama choma for dinner, which translates literally to “burnt meat,” which is essentially barbecued beef, chicken or goat, at one of the local restaurants. We had mentioned to Alex, our volunteer coordinator, about our plans for dinner before we had left on safari, but it turned out he had other plans for the evening, and so, we would be left having not only to find the restaurant on our own, but to also chance ordering our own food, which can be a interesting proposition around here.

At the Ngorongoro overlook

Ke, a longstanding repeat volunteer here at FAME who is from the US and also happens to be a medical student at Yale currently, decided to come along with us also. Ke has come for several months this time to revamp all of the networking here at FAME as well as help on some of the patient information systems that gather data on the patients seen here along with their medical information. The four of us and Ke went to town and after a bit of searching, found the nyama choma restaurant that Alex had recommended. There was a popular soccer match going on so there was a crowd watching that, but we found a few tables to combine and sat down to order dinner.

An overview of Karatu environs from the crater rim

We couldn’t understand the price she was giving us for the nyama choma as it sounded like she was saying 80,000 TSh (T-shillings) per kilo of meat, or bit less than $40, which made absolutely no sense as that would be almost the price of Kobe beef, so Ke and I went up front to check with the cook. The cook sits in a little smokehouse with slabs of meat hanging from hooks from which he slices off chunks and then grills it. The nyama choma was actually 8,000 TSh per kilo or less than $4, a much more reasonable price. We ordered 3 kilos for the five of us along with three plates of “chipsies,” or French fries.

They serve the meat, in this case we think it was beef, but also could have been goat, on a dish with some hot sauce and small piles of salt in which to dip your meat. The meat was chewy, but delicious just the same and I think everyone very much enjoyed it. It was another great ending to a very successful day having started in the Serengeti and ended in our small town of Karatu. Tomorrow we would begin our last week at FAME seeing patients.