It was Sunday again so in keeping with our tradition of “safari Sundays” while here on rotation, so we all awakened very early for a 5:30am departure from Karatu. The trip to Tarangire takes about 1:30 hours as we travel down the escarpment and through the village of Mto wa Mbu (Mosquito River) that lies at one end of Lake Manyara and traverse the valley towards Makuyuni where rather than turning left towards Arusha, we turn right in the direction of Babati. The north entrance to Tarangire National Park is on the way to Babati and just south of the shores of Lake Manyara.

Tarangire is a park that is dominated by river ecology and during the dry season, all of the animals must travel daily down to the river for their water as the many other watering holes are all dry. Tarangire is also home to an incredible population of elephants who travel daily from the protection of the hills during the night down to the river during the morning hours and back in the evening. There are huge herds of elephants wherever you look with many, many babies confirming the health of these wonderful animals. In addition to the elephants, there are also tremendous herds of wildebeest, zebra, and impala primarily with a smattering of waterbuck, eland, and Coke’s hartebeest. There are also lots of giraffe with many babies. As for predators, there are lions, cheetah and an occasional leopard. And then there are the monkeys. Numerous baboon tribes roam throughout the park along with vervet and blue monkeys.

A vervet monkey at the main lunch spot

An impala at the water’s edge

We arrived to the park sometime after 7am as I had to get gas in Mto wa Mbu and they thought I had “four” instead of “full’ so had put in only 40,000 TSh worth of diesel fuel when I needed at least twice that. It took me some time to eventually speak with another attendant who’s English was quite good and he suggested that I they just finish off the fill, pay for it and then do the second fill which is how we handled it and all went quite seamlessly, though we had spent more time at the service station than I had anticipated. 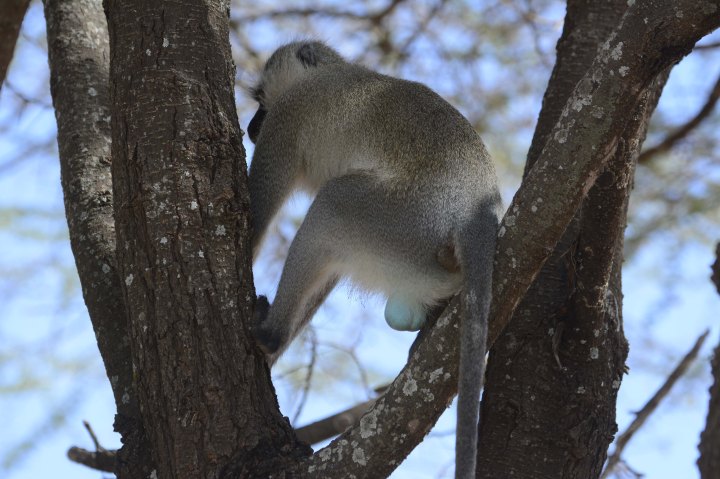 Shockingly, this is not a blue monkey, but rather a vervet monkey

An elephant keeping a very close eye on us.

Once back on the road, the sun was slowly creeping up behind the mountains to announce the new day with a sky of orange predicting the impending sunrise. It was overcast as we reached Makuyuni, but the weather overall was amazing and there was still al cool breeze from the dawn as the sun had yet to warm things up and was still quite low in the sky. We made our way to the park entrance along a 7 km dirt road with many irregularly spaced speed bumps and washboards that are sufficient to loosen any precious dental fillings with ease. I will always remember the entrance to Tarangire as it was the very first park we entered in 2009 when I was here with Daniel and Anna and up until that point, we had not been on safari nor seen a wild animal. Though it only seems like yesterday, I have been on so many safaris since then that it also seems like the distant past at times. Regardless, each safari is different and I see something new each trip not to mention the pleasure of taking the residents on safari as well and for most of whom this is their first experience traveling to Africa so it is also their first experience on safari. 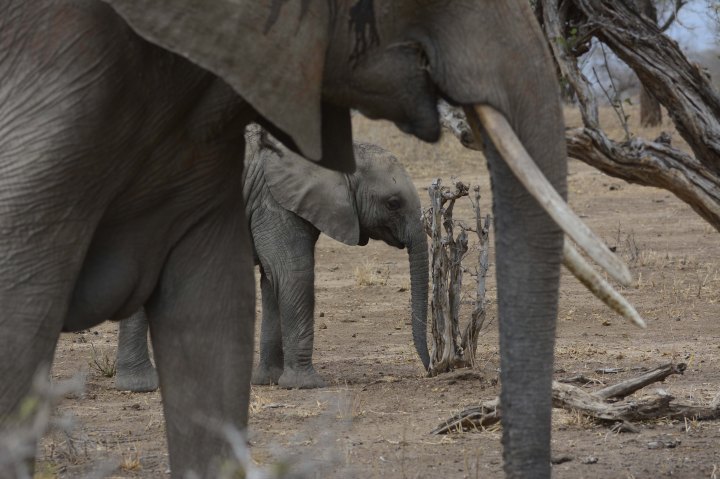 We were heading the river that runs through the park and dominates life here, especially in the dry season when it center of all activities considering it is the only water source as all others have completely dried up. As we were descending down to cross over the river, though, there were several vehicles stopped which is usually a good sign that there are cats around. Off to the side of the road and a short bit away were two cheetahs resting in the shade of a tree. Cheetahs are usually solitary animals, but will travel in pairs as two brothers or two sisters, but never mixed. They are such gorgeous and majestic creatures that I can never see too many of them. It was getting warm so they were in the shade and relaxing as much as possible at least until the sun begins to dip in the late afternoon. We’re on our way after a few minutes of viewing and several photos and looking forward to the remainder of the day and what else we might see. 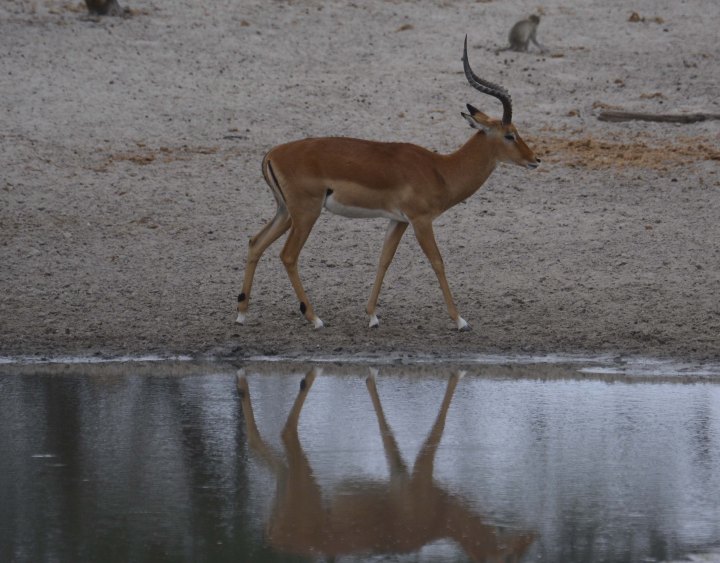 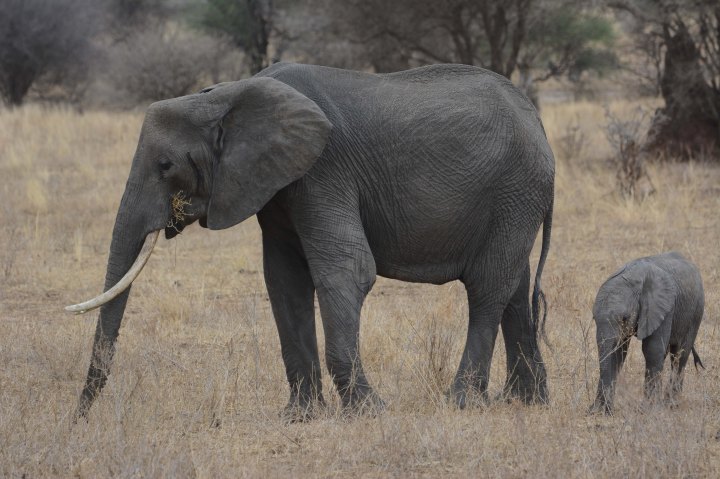 Coming down to the river, there were huge herds of wildebeest and zebra all in constant movement making their way towards the river either in single or as a group. The river is their lifeline at this time of year for without it, life would cease and the herds would move elsewhere. We traveled along the south side of the river for a time, moving in and out of the brush and eventually crossing it at a narrowing. On the north side there we again ran across another group of cheetahs, two at least and possibly more, sitting in the shade of the trees with the heat of the day increasing. We were traveling towards the Silala Swamp, a very large area on the south end of the park where, during the wet season, there are many animals congregating in the large wet areas. As we crested the hill to view the wide expanse of the swamp and stop at the picnic area for lunch that looks out over the area, we saw hundreds of elephants stretched along the open area off into the distance. They were broken up into families, but this was a sight I had never seen here, so many elephants in one place and all mixed together. There were also zebra and wildebeest throughout, but the impressive sight really was the number of elephants.

Jackel on the prowl

We sat on a picnic bench and table for our lunch along with a very large group of adolescents from the US that were on a group safari and had also stopped for lunch. They were traveling in the large vehicles used for this purpose that are like troop carries with seats and lots of storage down below for tents, food and personal belongings. These groups normally stay at the public campsites rather than at the tented camps or lodges that are far more expensive.

While at lunch I had spoken with a safari guide, who was somewhat taken aback that I was actually driving and guiding our vehicle, and learned that there was a lion about two kilometers down the road along the edge of the swamp. We drove down to the edge of the swamp after lunch and just about where predicted there was a solitary female lion sitting under a tree. She appeared to be covered in mud (or blood?) so I suspect she had probably taken some prey in the wet mud not to far from where she was sitting. She got up a few times, but for the most part was quite content to be resting during the heat of the day. 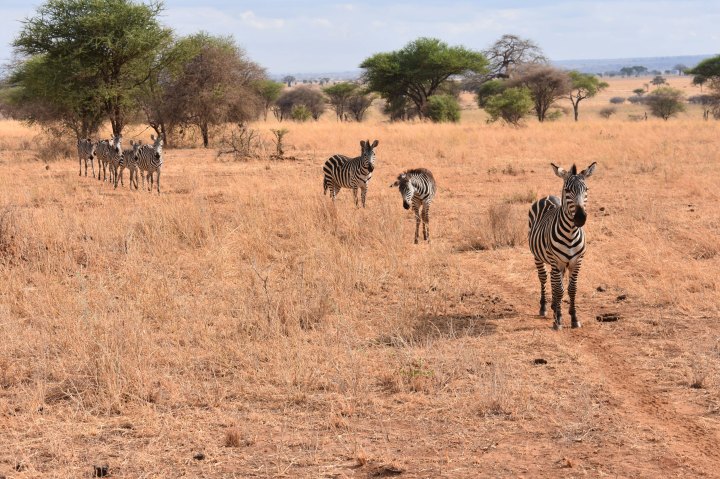 We had also had word that there might be a leopard in the other direction along the swamp so we decided to drive that way and up into the hills eventually looping around in the vicinity of the Tarangire Sopa Lodge. There were several families of elephants wallowing in the mud quite close to the road and there was definitely some jockeying for position go on. There were lots of rumbling noises coming from the groups, a sound just like what the tyrannosaurus rex made in the movie, Jurassic Park. It is a low baritone sound that you can feel in your bones. That was fairly frequent along with other less frequent trumpeting sounds that were clearly some communication of displeasure or warning made as the families jostled amongst themselves vying for the best mud. We watched them for several minutes and eventually departed in quest of our leopard.

We drove slow and kept our eyes peeled hopeful that we would fine the third species of big cat for the day, but alas it was not to be. Leopard’s are certainly quite elusive and the most difficult of them to fine, but I thought we had a good chance given the reports we had heard. I have seen many leopards over the last years, but the others will have to wait for a sighting perhaps in the Central Serengeti where we’ll be this coming weekend.

Traveling back towards the main gate we spotted many more animals and even another cheetah back on the main road. It was a long day for us having entered the park before 7:30am and not reaching the gate to exit until perhaps 3:30pm. That’s quite a long safari and I think everyone, including me, was quite tired from the day. We grabbed some cold Fantas before hitting the tarmac and were then on our way home. A quick stop at our friend’s art gallery to buy more presents for home and we were back to FAME in no time. We were all quite dusty and tired from the day, but thankfully Alex, our intrepid volunteer coordinator, had offered to make us dinner after our safari. We had homemade tortillas, corn salsa, grilled peppers and grilled meat. Glen made a cucumber and salsa appetizer to go along and we were all quite happy with a well-cooked meal at home.

Tomorrow we will begin our mobile clinic week so will miss the lunches here at FAME. We begin at Qaru, south of Karatu, then Rift Valley Children’s Village on Tuesday, Kambi ya Simba on Wednesday and ending with Upper Kitete on Thursday. We’ll organize everything in the morning and be ready to hit the road by hopefully 9am or so.