It was once again a picture perfect morning here in East Africa. A slight chill was in the air walking to clinic this morning as the nights are becoming cooler and refreshing. We all arrive to morning report with all of the doctors working this day along with the night doctor finishing their shift and getting ready for some sleep. Dr. Ivan has been on night duty for the week so has given us report each morning not only on the patients already on the ward, but also on the new patients who came in overnight. We always listen intently to each case for any neurological issues, as we will provide consults on those patients. A woman did come in with what sounded like new onset psychosis and would be someone for us to see, but she needed to have most of her medical workup first to see if there was an obvious cause of her symptoms before we would get involved. 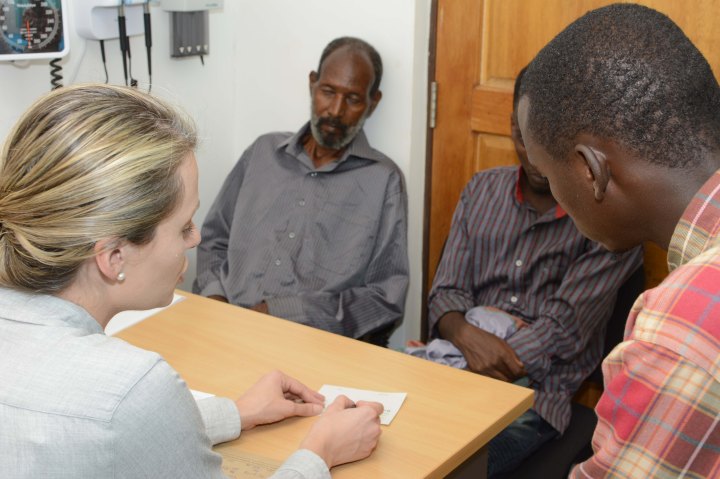 We were working only a half day today as I had scheduled the afternoon for a resident wellness day. I believe this is a new requirement for all ACGME accredited programs and provides that residents receive a certain amount of time during training which can be used for personal enrichment and “wellness.” As these days will typically be given during elective rotations and they are currently on an elective with me, it made sense to place two half-days aside for this purpose. Today would be the first resident wellness day, or really half-day, in Tanzania. Since it would be impossible to see the same number of patients we’d been seeing in a half-day, I asked Angel to only schedule 16 patients for us to see this morning which meant 5+ patients per resident if we had our three rooms running and seemed more than realistic.

sWhitley’s day included her favorite type of patient, Parkinson’s disease, since she is planning to go into a movement disorder fellowship and this is her main area of interest. The patient and family reported that he had been on carbidopa-levodopa previously and they thought that it had helped, but that the effect of the medication was wearing off prior to the next dose. Carbidopa-levodopa is a combination medication that comes in several ratios of the two medications. At home we typically use the 25/100 combination for reasons that I won’t bore you with other than to say that we like to achieve a minimum of 75 mg total daily dose of the carbidopa to avoid side effects from the levodopa. Using at least three of the 25/100 tablets at home is the perfect combination for us, but for some reason the only strength we can get here are the 25/250 tablets which are typically used for the more advanced patient with the larger dose of levodopa (250 mg). This creates a bit of an issue when starting this medication, as it is impossible for us to get enough carbidopa in the patient when initiating therapy.

Whitley’s patient had been on the medication in the past and they felt it had worked as he was very clearly quite symptomatic and would certainly benefit from it. Since the main issue really is the tolerability and not effectiveness with the dosing we have here, we’ve found that most patients will do well and the complaints are pretty minimal (mostly nausea). Whitley started him on ½ tablet four times a day as he was often up rather late and would need this to get him through the day. Most patients are up at sunrise (6am year round since we’re on the equator and there’s no need for daylight savings time) so he would take his first dose at 6am and then at regular times following that. Since we’ll still be here at FAME the week after next and the patient lives quite close we decided to have him come back to see us before we leave so we could see how he was doing on the medication.

Sara’s last patient of the day was a young girl that we have seen over the last year and has been quite a diagnostic dilemma for us. She is sixteen and began having events that were quite suspicious for seizures with a very normal developmental history. She was injuring herself falling during the seizures, but some of the events were also quite odd and concerning for psychogenic episodes or conversion. In addition, she seemed to be having subtle cognitive issues at first, but it was hard to tell and there was some concern that this may also be more of a psychogenic issue. She had been in school, which is how she first came to us through the expat operating the school, but over time she has worsened and was no longer able to stay in school so is now at home with her family. As is often the case, I believe there were also concerns about her home life that further complicated issues.

She has been on multiple medications over the last year, none of which completely controlled her seizures. We even resorted to valproic acid, a medication that can cause severe birth defects so is never used in woman of child bearing age, but we did so after the family finally consented to giving her Depo-Provera, a long acting birth control injection lasting three months. That was done at our last visit here in March, but in the interim it was noted that her seizures had worsened, or at least were no better, and so she had been switched back to levetiracetam, This medication had possibly helped in the past, but the supply was limited which is why we switched her to valproic acid last visit. Levetiracetam is now available in the country, though it is very expensive compared to other antiepileptic medications and therefore difficult to use for that reason.

Neena and Emanuel evaluating their patient

Sara went through a thorough history of her seizures as well as her cognitive issues and also did as comprehensive examination as she could given her cognitive issues that are now clearly worse raising concern for some metabolic or genetic disorder and it is also now quite apparent that we are not dealing with any facet of conversion, but rather a degenerative condition that will likely not end well. What that is, though, is really not an easy question given her constellation of symptoms and seizure types. Lennox-Gastaut syndrome would be an easy solution, but she did not really fit this for various reasons. Sara decided to do some research to come up a better differential diagnosis list, which was certainly beyond my capabilities, and in the meantime, increase her levetiracetam to 1500 mg twice daily. The family did not have concerns with the cost of the medication making things a bit easier on that end. The list of diagnoses that Sara came up with later, and which I was absolutely no help with, were Lafora disease, Niemann Pick type C, Gaucher type III, Sialosis , and Hallervorden-Spatz. Please don’t expect an academic discussion from me on these diagnoses as that is exactly why I’m an adult neurologist. As with the other patients, we asked that they come back to see us before we leave so that we can assess how things were going with the medication as well as after we’ve had some time to think about her case.

Neena and Emanuel evaluating their patient

The residents had multiple options of what to do on their very first wellness day that ranged from relaxing at home and catching up on work to going to town to do some shopping to visiting one of the lodges for an afternoon at the pool (Whitley hadn’t brought her bathing suit though could just use shorts and a tank top). The final decision of what we would do, though, was clearly dictated by our stomachs as Gibbs Farm has a wonderful buffet lunch that I hadn’t gone to since 2009 when I was originally here on safari with the kids. Since then, they have completely remodeled the resort and the kitchen. We were running just a little late given Sara’s final, quite complicated patient of the morning, but we arrived to Gibbs in plenty of time for lunch. 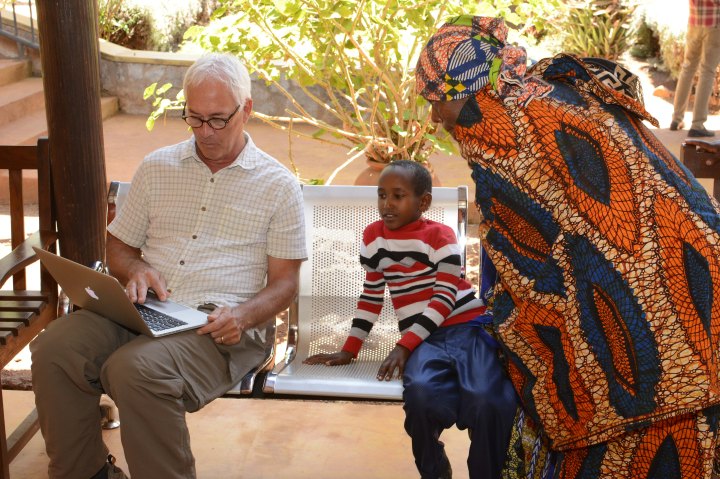 Dr. Gaulton sharing his photos with a patient

To say that the lunch was spectacular would be an understatement. There were so many things to choose from including at least half a dozen different types of salads, cold meats, cooked meats, chicken stew, quiche, incredible soup and more. We all got a plate full of food and relaxed at our table admiring one of the most lovely views in all of Karatu as we all counted our blessings that we were here to enjoy this. I don’t think I would surprise anyone to tell you that we each went back to the buffet for seconds before later checking out the deserts, which were equally scrumptious. We were all silently thanking Ray Price for insisting that I schedule this wellness day for the residents, Glen and I most of all since we were merely chaperoning and, to the best of my knowledge, there was no mandate for a faculty wellness day! 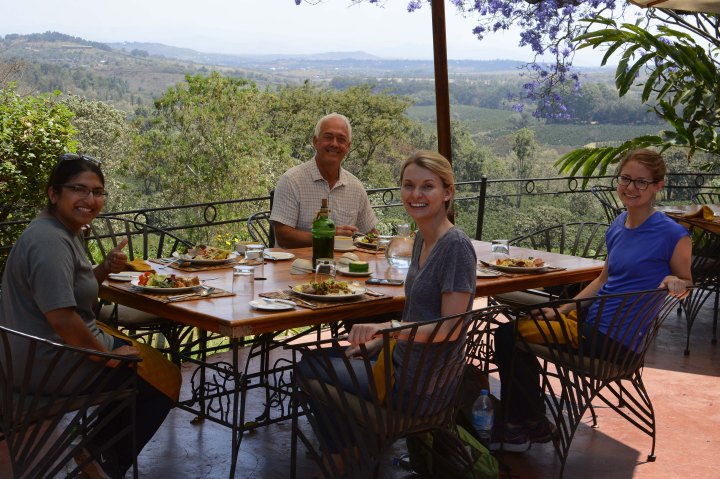 Lunch on the veranda at Gibbs Farm, one of the loveliest places on earth

Glen and I had decided to remain at Gibbs for the afternoon while the residents were going to hike to the Elephant Caves, a moderately strenuous hike that is in the Ngorongoro Conservation Area starting from behind the Gibbs property and going uphill to a location where the elephants mine for necessary minerals in the hills forming “caves.” It’s a gorgeous hike that I’ve done before and given the fact that I’ve been having some trouble with my left knee (a torn meniscus from a bicycle fall while training for the MS bike ride and diagnosed the week before I left) I decided not to take any chances. The path travels through the forest on the side of the crater rim and traverses several creeks and waterfalls. Glen had some work to finish on a grant and I on my blogs, so the two of us had to tough it out by sitting on the lawn in front of the veranda in very comfortable lawn chairs being served iced tea the whole while. As they say, it was rough, but someone had to do it.

Atop a waterfall on the hike to the elephant caves 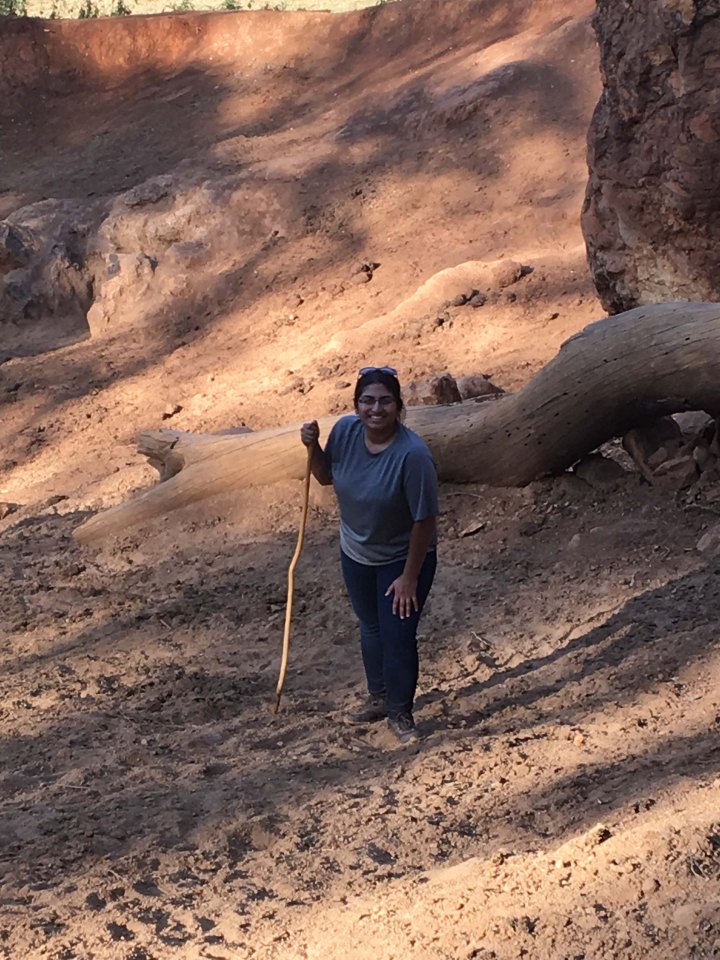 Neena climbing up the elephant caves

Neena, Whitley and Sara were back just before 6pm (sunset), but I knew they were safe as you are accompanied on the hike by a ranger from the NCA for the mere fact that you’re walking through an area teaming with wildlife – elephants, Cape buffalo and an occasional leopard. When they returned, we all decided to have a drink as the sun set in the distance and enjoy the tranquility of Gibbs Farm, perhaps one of the most beautiful places on earth. I again worked on my quest to sample Moscow Mules and can report that the ones served at Gibbs are truly delicious and should not be missed.

Scrapings from the elephant tusks searching for necessary minerals

We all finally loaded up into our vehicle to head home and relax for the remainder of the evening. Dinner had been brought to our house and even though we were all still somewhat full from that amazing lunch, everyone but Neena managed to take care of our dinners, spaghetti and meat sauce. I was quite a memorable day and for the first designated resident wellness day, quite a success. We have one other half-day designed just before we leave and I think you already know the answer as to where we will be spending it.