Today was Saturday which is often a much quieter day for us. It was also our last of the unadvertised days that we’d have to work as next week we were having neurology clinics each day, Monday through Saturday, that had been announced in the community by Sokoine and others to let everyone know we were coming. The message is given in churches, community centers and other health facilities along with a description of the types of illnesses we evaluate and treat. Explaining this to potential patients certainly isn’t the easiest thing to get across, but over the last several years, the team here have done a fantastic job of getting the message to those who should be coming to see us and deterring those who shouldn’t be (those without neurologic disease) from coming to see us. They have also made these announcements to some of the villages in more remote areas of Karatu district where we’ll be going the week after for our FAME Neurology Mobile Clinics. This has been our model for the last several years and it has been highly successful in serving a good portion of the neurological population here. 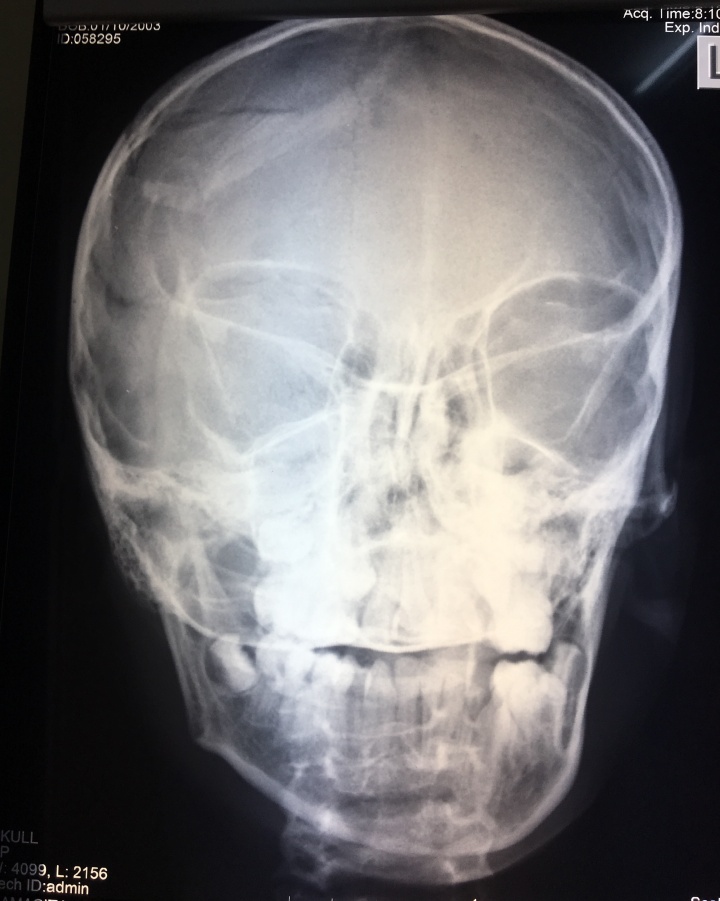 Our young boy with his skull fracture in the right parietal region.

At morning report, we heard of a young 14-year-old Maasai boy who had come in last evening after falling out of a tree and striking his head on a rock, suffering a large laceration that had been repaired at a dispensary, but then his family had brought him to FAME. Whitley hadn’t seen an inpatient consult yet, so she was up for the job to evaluate this trauma and, primarily, neurosurgical case in a place where there are no neurosurgeons and only neurologists, at least for the present. Dr. Lisso showed us the plain skull films that were quite impressive and Whitley was expecting the worse when she went to see him, but he turned out to be neurologically intact other than the fact that we couldn’t really look in his right eye due to the very significant periorbital edema he had that wouldn’t allow us to look at his pupil let alone do a fundoscopic examination.

I sent the X-rays and clinical summary to Sean Grady, Chair of Neurosurgery at Penn, to get his thoughts on the case, though it was 2am at the time so I didn’t expect to hear much until later in the day. The issue was that the family didn’t have money for a CT scan and we weren’t sure that he really needed to get one given his normal examination. We explained everything to his family who seemed to appreciate hearing the results of our evaluation. We heard from Sean later in the day agreeing that given his examination it was safe to watch him and that his fracture would heal by itself. He also confirmed that he was indeed a lucky young man. Unfortunately, he had such significant swelling around his eye, that he was transferred to KCMC (Kilimanjaro Christian Medical Center) the following morning because of concern regarding his vision. 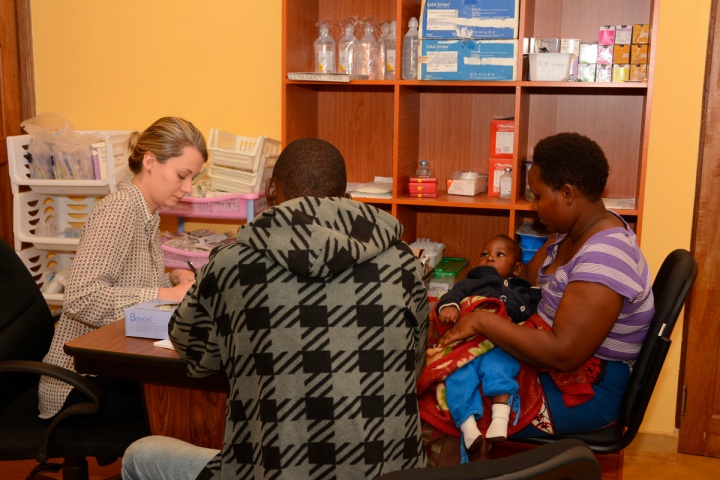 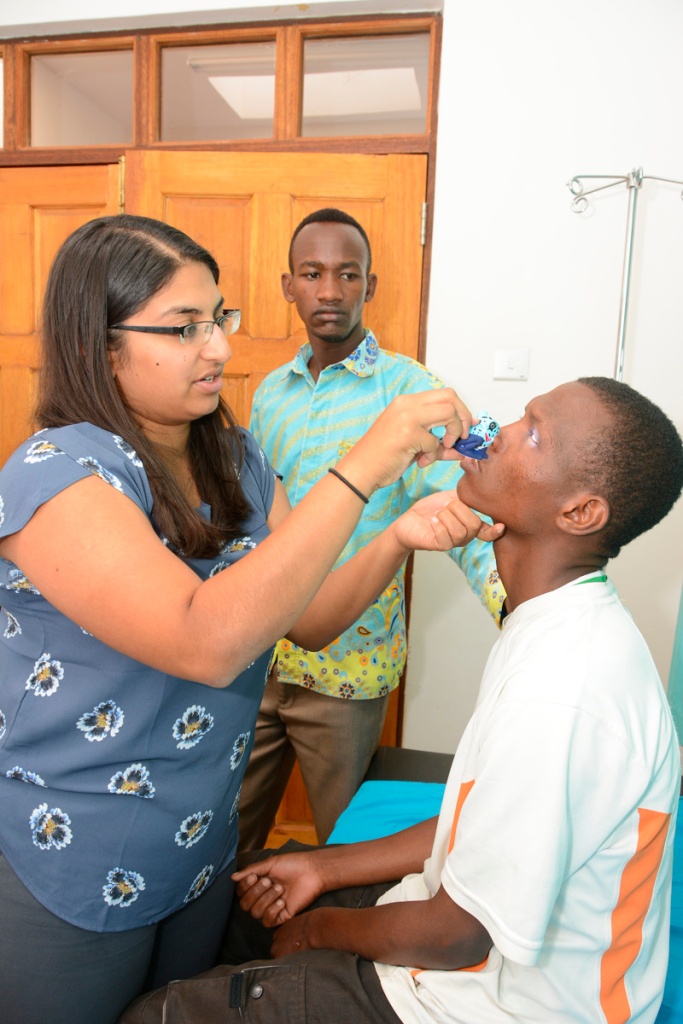 Neena evaluating her patient with seizures and blindness

Neena was in her glory when a young man came in who was blind and it was readily clear that he had an issue with corneal scarring. The patient’s mother at first had indicated that he had been blind since about four years of age when he had had cerebral malaria and she thought for sure this was going to be a case of rubella, but the history was incorrect and he had actually had seizures following his cerebral malaria at four years of age. He had not lost his sight until just a few years ago when he had apparently rubbed the sap of the Maanya tree (what the Maasai call it) in his eyes and it had scarred his eyes terribly such that he became blind. Whatever it was, it did a good number on his cornea with severe scarring and he had no light perception. It was still a very interesting case for Neena given her interests, but in the end we had very little to offer for the vision and continued him on his anticonvulsant medication which had been working rather well. 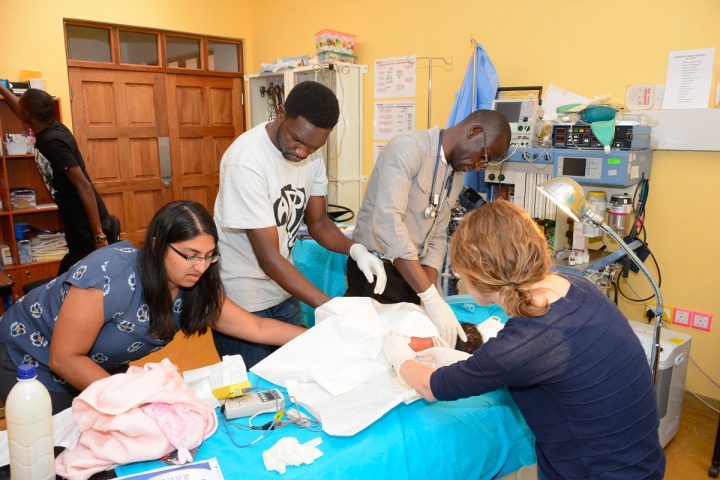 Neena, Daniel and George assisting with the lumbar puncture 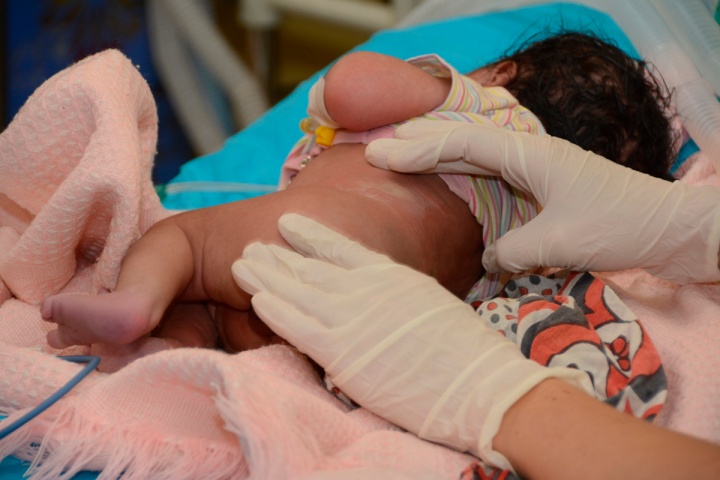 Sara prepping for her lumbar attempt. 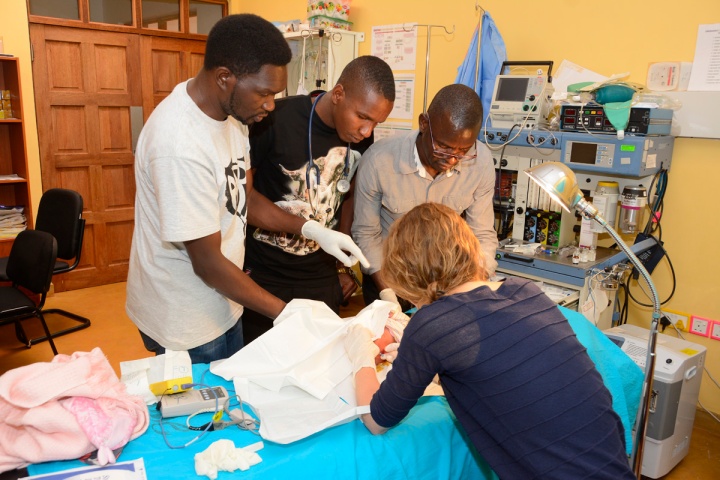 Making a last attempt with the lumbar puncture before giving up

Things had slowed down around lunch time and we had decided to try another lumbar puncture on the baby we were concerned had meningitis. Sehewa had been unable to get it last night and we felt it was reasonable to try again as the results would dictate what our recommendations were for length of antibiotic coverage. We checked with Edward, one of the head nurses and backup anesthetist here at FAME, about helping with the procedure and he informed us that they were typically using anesthesia for these short procedures. This was a bit more than both Sara and I were used to, but it really wasn’t our place to tell anyone the what we believed was the right way to do something here so we deferred to Edward and had to wait for everyone to get the newborn prepared for the procedure. It was clearly overkill from our standpoint, but it all went well regardless, at least as far as the anesthesia is concerned. Neither Sara nor I were successful in removing CSF in this manner despite multiple attempts that the baby tolerated well. Meanwhile, we were all exhausted, but the day was over for patients and we decided to run into town as I had to look for some new tires and it was the Maasai Market today.

A sea of mankind that is the Maasai market

The Maasai market is something that takes place in most towns and cities around the country, occurring here in Karatu on the 7th and 25th of each month. I planned to drop off Sara, Whitley and Neena at the Market to wonder around while I went off to deal with my tires. They had a phone so I could reach them when I returned. Unfortunately, I was not successful in getting my tires for when I drove up to Jubilee Tyres here in Karatu, there were two local Land Rovers on jacks having the tires I had looked at the night before being mounted for them. I hadn’t been able to make the decision as I needed to hear back from Leonard and we were texting each back and forth. Luckily, I spoke to the manager of the shop on the phone who assured they would get them in for me next week which was certainly fine. I had four good tires on the vehicle and one bald spare that would have to do on our safari the following days.

In the mass of people, I was finally able to locate my three residents just as they had been intercepted by some street merchants selling their local wares. It can be pretty intimidating as they can be very determined in their efforts to see you something and it’s very hard to break away from them at times. It’s also an art of negotiating here as the price that you finally pay is never what they are asking so it’s pretty much of a game going back and forth to meet somewhere in middle. The longer you hold out on buying something, the lower the price goes and the final prices can often be only a fraction of what the original price had been. The three had a very good introduction into some of the finer points of haggling for wares and ended up walking away with some things they were happy with for reasonable, though not rock bottom prices. The market can be totally overwhelming for even the most hearty of explorers, but the three of them did very well, indeed, and I was proud of them for not having enjoyed the experience.

The market is where all those bales of donated and unwanted clothing from the US end up having been shipped into Dar es Salaam, loaded on trucks and distributed throughout the country just as it is all across Africa. If you haven’t read The Blue Sweater yet, you should. Not that it’s all about the Maasai markets, but it does include the story of the author, who discovered her old discarded sweater while working in Rwanda. Every college, university, state, most high schools, most car companies, and others from the US are represented in the T-shirts and jackets that are sold here from the hundreds of piles of clothes strewn across the ground and being sold by the vendors. Many others are walking around with other items hanging off of them for sale and still others are selling their wares from backpacks and bags. One the young men selling things to us turned out to be Onesmo, a young boy who I’ve known for several years and who has basically now made his life on the street selling necklaces, bracelets, carvings, drums and anything else he might be able to fit.

Neena at the Maasai Market

Our evening ended with a get together at Nish’s home as he had invited many volunteers from the area for food and drink at his house as he would be traveling for three weeks after the 20th. It was again great fun to meet and talk with other volunteers from all over the world who had gathered here in Karatu and the surroundings to do good. We were the only medical volunteers, of course, as most of the others were working at schools, orphanages or microfinance offices. We had to get up early for our safari so we left while the party was still hopping, knowing that we’d be spending the day with the animals at Lake Manyara.