The rain fell solidly throughout the night in a steady chorus against the fabric of our tent, though seemed to let up slightly in the morning. I remember lying in my incredibly comfortable bed beneath the soft sheets and warm comforter wondering about what the day would hold for us. Certainly, if it had been still pouring, it would be very unlikely that we’d head out into the bush as early as planned, but since there was a reasonable break in the weather, I got out of bed before 5:30am along with Chris and we decided to head over to the mess tent for our morning coffee before loading into our vehicle. IT was still pitch black outside and we clicked our outside light off and on several time to call for an escort. When no one came, I began to whistle hoping that someone would hear us, but to no avail. Finally, with flashlight in hand and swinging it from side to side like Leonard had taught me, we made our way to coffee praying that we weren’t being watched by a hungry lion or hyena. All morning before getting out of bed we could hear the soft roar of two lions just outside of camp as they were heading somewhere near the lake. Thankfully, it was not our morning to serve as lion fodder and we promptly sent an escort for the girls.

A bat-eared fox in the rain

I vaguely recall the camp manager’s comment when I mentioned the nightlong rain and we should have taken more heed at the time. He said “too much rain” as nonchalantly as one can, but was clearly prescient in his wisdom. We piled into the Land Cruiser in the dark and popped the top so as to stand in the cool early morning air as Yusef navigated along the paths we had driven in on yesterday afternoon. It was immediately clear that the rain we had received through the night had swollen the previously shallow waterways so that they were all now swollen to several times their previous size. Paths we had previously taken were now underwater and even if you could find something familiar, it would very quickly lead into one of the bursting waterways.

One of our several rainbows of the day, this one with a giraffe at the end

We forded several deeper bodies of water and eventually made it back to the small Marsh which is always a good spot to find lions. Jamie immediately noticed the tracks in the mud that Yusef identified as hyena and they were noticeably fresh leaving no doubt that the beasts were very close by and likely directly in front of us. As we came around the corner of the marsh, we immediately spotted the same lioness we had watched yesterday and she was dragging a freshly killed wildebeest up towards the brush. Even more exciting, though, was the fact that there were three hyenas following her very closely and it was quite clear that their intention was not to settle for seconds. As we drove closer we could see the recent kill clearly whose abdomen had been opened completely with all its viscera exposed. The hyenas backed off as we entered the scene and maintained their distance for some time, though eventually skittering into the distance beyond our sight having chosen to make their battle another time. I’m sure the lioness was thankful for our intervention as it saved her from what would have been a formidable battle as she would have had at least three hungry hyenas to take on and possibly more had reinforcements showed likely shown up with the sounds of the fight.

We watched her eating for a fair amount of time until she became either full or tired and dragged the carcass further up the hill into a thicket of brush where it was partially hidden and she could lie down somewhat protected from the rain that had now begun to fall again. Two other vehicles had pulled up to watch the lioness and they had come and gone while we remained to watch. We were now heading in the direction of the big marsh to look for other lions or whatever we could find. The amount of rain that had fallen overnight had completely filled the basins that we had easily driven through yesterday and the water was actually flowing in the direction of the Lake so that what were previously very drivable trails traversing the dry river beds and wetlands were now flowing rivers. We crossed several smaller tributaries flowing into the river, but now had to get to the other side to continue on which would mean a full on fording of the waterway. One of the other vehicles that had been with us at the lion kill drove down to the river side with us where there were tire tracks entering and in the distance, one could see tire tracks exiting the flowing mass of water. It was a long way across, but we knew at least that there had previously been a road underneath somewhere and it most likely connected between these two points of entry that we could see.

We began the crossing with water splashing in all directions, up over our hood and to the sides in all directions. The Land Cruiser did what it was supposed to do, thankfully, and we drove across the river with waves departing from each side of the vehicle in an amazing demonstration of the utility of these vehicles. The other vehicle followed behind us and we both drove off with the satisfaction of having conquered at least one major obstacle this morning. We were now on the other side of the river and driving off in the direction of the big marsh. The roads remained passable, but were becoming more and more treacherous and, finally, at one point while we were in a particularly wet area, the vehicle began to spin from side to side leaving us eventually perpendicular to the road and pointing uphill with our rear wheels completely dug into the mud, spinning with no traction whatsoever. It was then that we discovered that our four wheel drive wasn’t operational as the transfer case, which is a push button activation with automatic locking hubs on this vehicle, wouldn’t engage. Not a good situation in these conditions.

Trying to jack up the vehicle 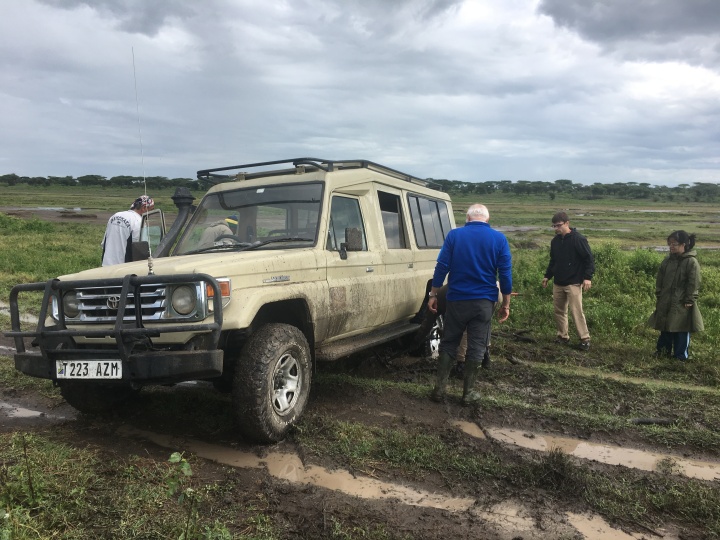 Stuck in the muck

We were helplessly stuck at the side of the marsh with the vehicle pointing uphill, the rear tires buried, and pure muck behind us. I recalled that this was nearly the exact location where we had seen one of the lionesses yesterday so this was certainly not a good place to try and walk out of on foot. Once again, it ran through my mind, just how I would explain this to the program directors at home that one or more of their residents had been eaten by a lion while on safari. It would surely put a damper on the future of the program. We would have to get to work to get ourselves out of this predicament and thankfully, I had brought my rubber boots which I changed into rather quickly and got out of the vehicle to assess the situation along with Yusef. It didn’t look very good, but we got to work pulling out our Hi-Jack, a very tall jack stand that allows you to lift your tires completely out of holes if needed. Unfortunately, we had no rocks to pile under the rear tires, a strategy that often works to improve your traction, so instead tried to pile downed tree limbs under, but it was all to no avail as the tires wouldn’t grip and there was no way we were capable of pushing the vehicle out. 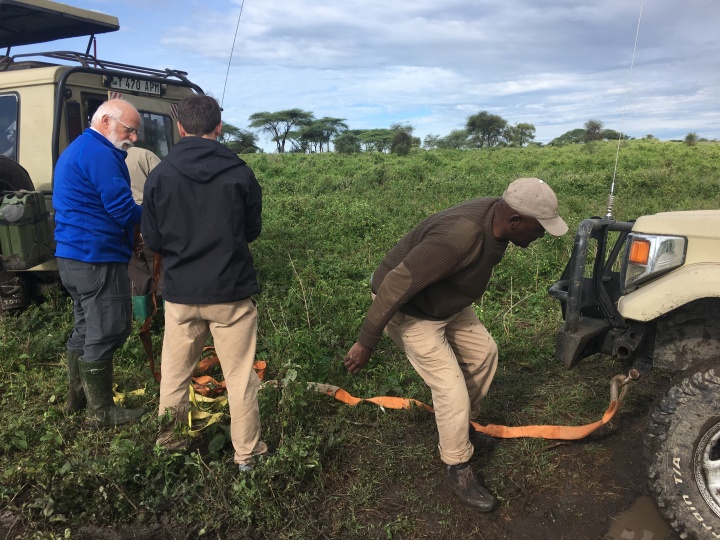 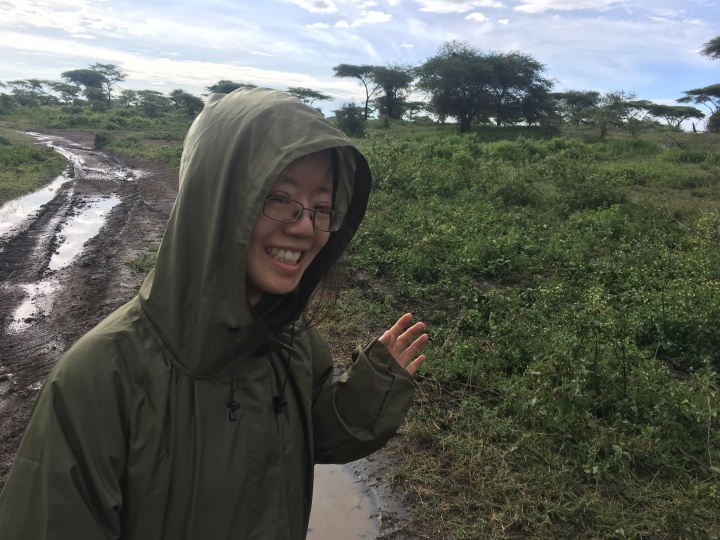 As we sat pondering our dire situation, another safari vehicle showed up on the scene and stopped to help extricate us. After numerous additional tries of jacking up the vehicle, it was eventually decided to try pulling us out which would be a real task considering the orientation we were in and the fact that ground in front of us was also a bit on the slippery side giving less than optimal traction for the other vehicle. We initially unsuccessfully with a chain they had from their vehicle until we realized that we had the tow strap which I had given to Leonard over a year ago in ours. The two strap was longer than the chain and had the benefit of some elasticity to provide additional pull on the vehicle. After several tries, our vehicle was eventually freed to the cheers of all of us and it now sat on somewhat more firm ground for us to continue, that is at least for the moment.

Walking back from the scene of the crime