Since we are on the equator, something I’m quite used to in Tanzania, the sun rises and sets pretty much at the same time throughout the year. Here, you can tell time by the sunrise and sundown, something that must have been quite useful to our fellow man in the days before the invention of gears and dials. It’s actually quite a reassuring occurrence and one that you become accustomed during your time here. So it was awake with the sun and preparing for a day in paradise with the first stop being Tortuga Bay. 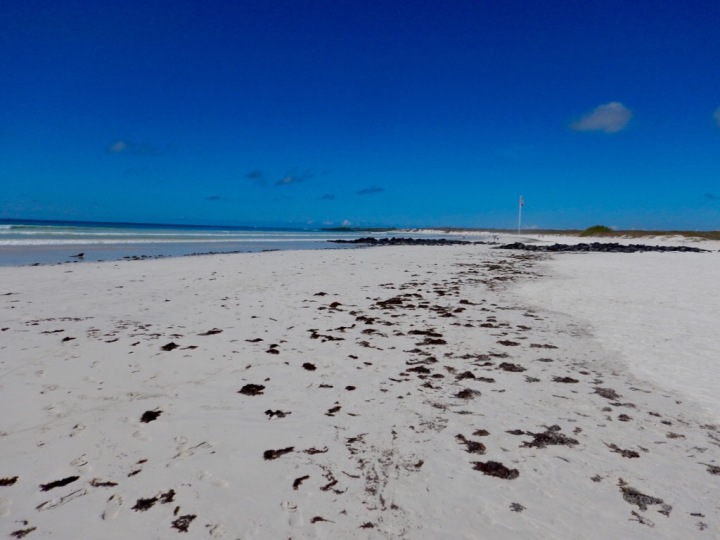 A very short walk from Encantada Blue (our home away from home) begins the path to a well-known beach adjacent to Puerto Ayora. After registering at the little kiosk before we begin our short hike, we head off on the brick path that travels through the volcanic landscape with lots of different cactus, many of which are quite large and tall. Small lizards sunbathing on the small ledges that border the trail scurry away as we pass sometimes trying to out run us as we forge ahead to the beach. The trail winds up and down the small hills and we eventually hear the ocean waves in the distance well before we arrive. And eventually we see the blue water and waves in the distance, like an explorer spotting land, with the beautiful white sand coming into view and, to my delight, there sits a marine iguana right at the water’s edge as if waiting patiently for our arrival. 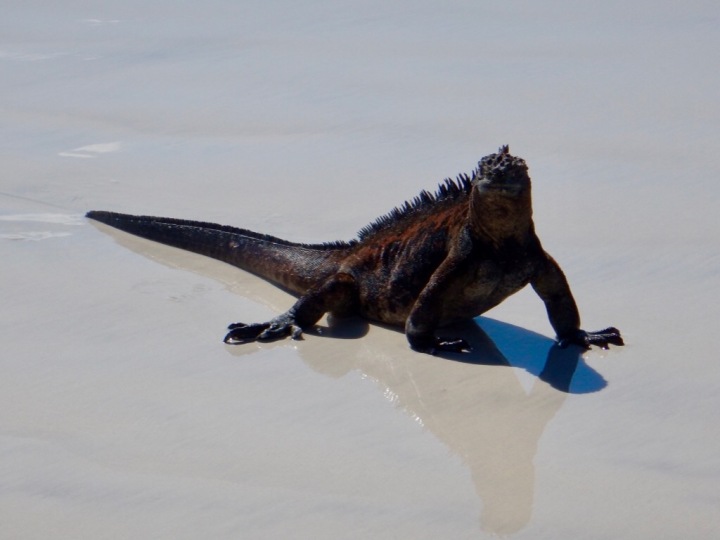 A Marine Iguana crossing the sand 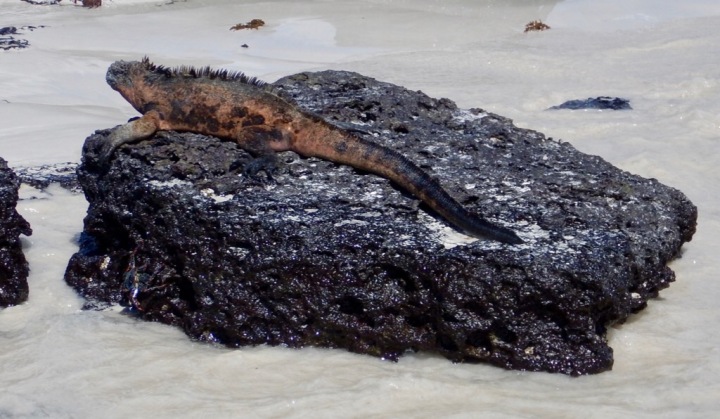 Tortuga Bay is a wonderfully picturesque, white sand beach in the shape of a scimitar that is about 1 km in length. There are volcanic outcroppings that border it on each side and all the beach are marine iguanas marching in one direction, most of them on the sand, but several swimming in the shallows in the same direction. They are like dinosaurs, survivors of a time long ago, who have managed to survive and thrive in the present. These are the only marine iguanas in existence and they reside only here in the Galapagos, as do many of the species on the islands. 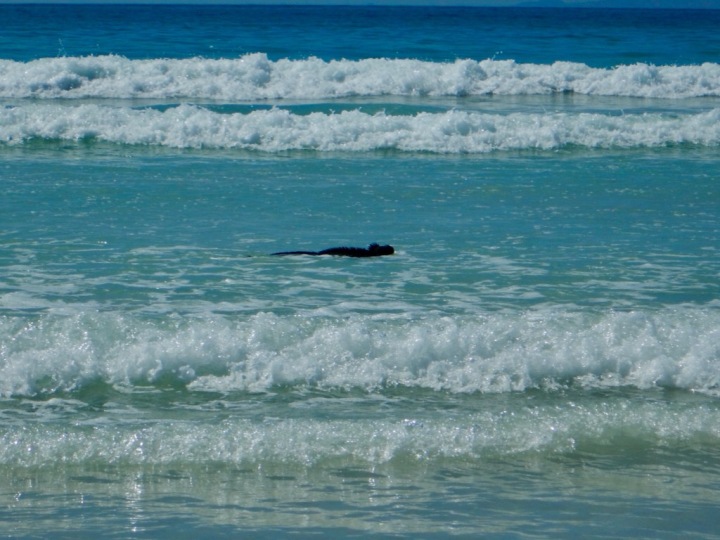 Swimming is quicker, but colder 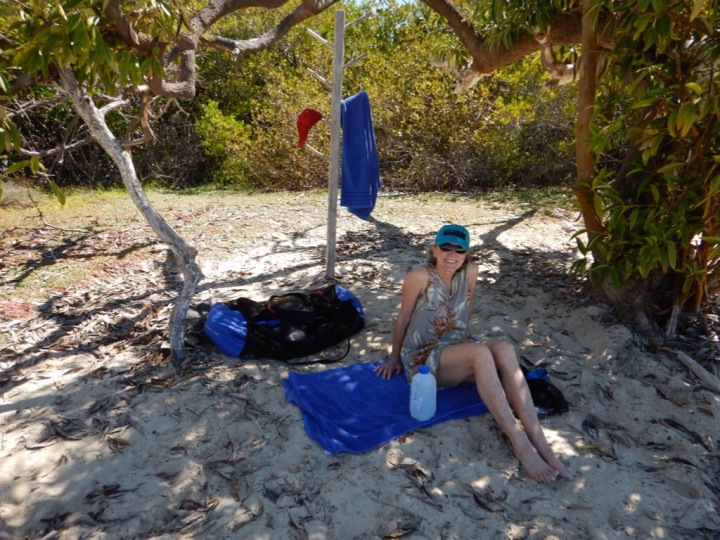 Our perfect spot along the mangrove bay 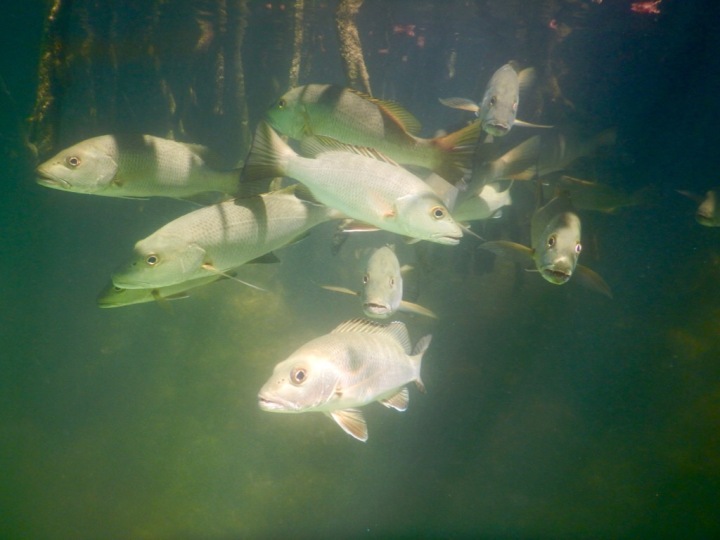 Some native fish among the mangrove roots

We walked beyond Tortuga Beach to a small bay that is surrounded and protected by mangroves to allow swimming without worrying about the currents. We found a nice shady spot below a tree to set our gear down and relax for few minutes before setting out to see how the snorkeling would be. Far out beyond the lagoon there were larger waves breaking, but they were reduced to mere swells by the time they reached this beach. Families and other groups were enjoying the swimming here and Kathy and I set out to try the snorkeling only to find that the visibility under water left much to be desired. We were still able to see schools of fish, sea slugs on the bottom and a glimpse of a sea snake in the vegetation, but overall, it was a bit disappointing. The water was so refreshing, though, and the weather so amazing, that we were still quite happy and enjoyed the outing. Given the poor snorkeling conditions we gave Marco, our friendly taxi driver, a call to see if he was free to take us up to the ranches where the giant tortoises roamed free. He was free a bit later, so we set up a time to meet and he would take us on a tour of the highlands. 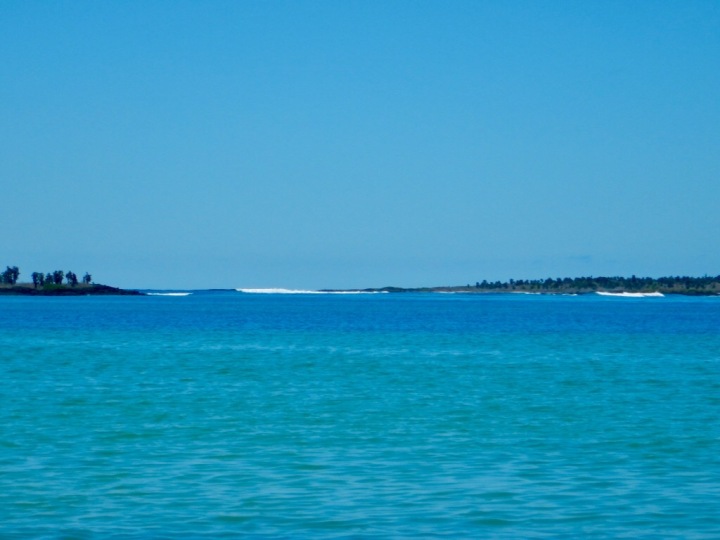 We trekked back along the same path and under the blazing sun to exit the park and after cleaning up decided to grab a sandwich for lunch at the Galapagos Deli. We found that they make their own bread which was incredibly delicious! Marco arrive a few minutes late, island time as Kathy calls it, and off we went to see the giant tortoises. There are several private ranches that you can visit where these amazing creatures roam free in the Santa Cruz highlands. What once was a decimated population that had dwindled down to ten adults in the wild due to pressure from introduced, non-native rats who ate the eggs and killed the young is now a thriving population of approximately 4000 wild individuals. This is all due to an active breeding program where eggs are fertilized in a research station and babies are raised until they can survive on their own when they are introduced into the wild. The tortoises are incredible animals that can live to well over 150 years and are docile, lumbering creatures whose only protection is to retreat into their shells when challenged. Their survival and now thriving population is a testament to the hard work of the Darwin Foundation which has spearheaded this program along with the government. 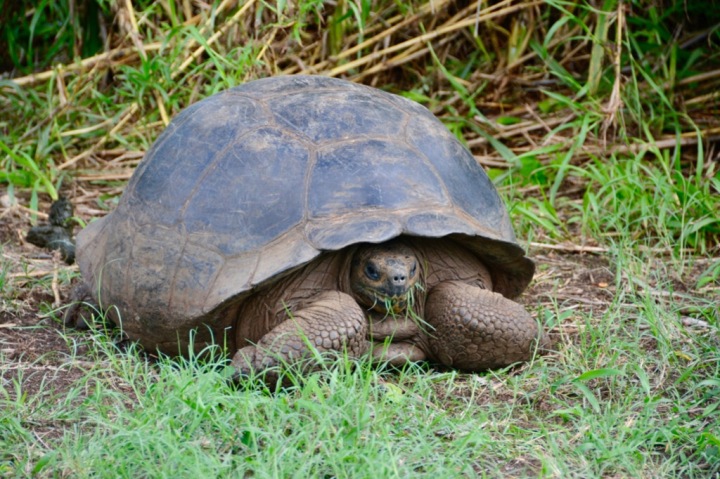 A Galapagos giant a bit wary 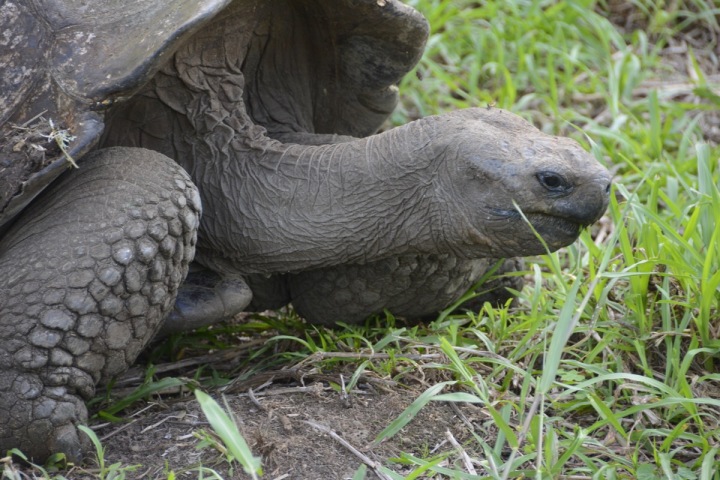 After saying goodbye to the tortoises, Marco took us to some lava tunnels that were nearby. These are long tunnels that are formed by flowing lava that cools first on the outside and then the molten lava in the center continues to flow and empties out like a straw. The tunnel we visited was 400 m in length and, for the most part, very wide as we walked along with the lighting of light bulbs hung from wiring zig zagging along above our heads. The floor was often strewn with large rocks obviously fallen from the ceiling and the footing was slippery from the fine mud silt covering the floor. At one point, though, the ceiling descended to a mere three feet that required us to crawl through on our elbows. It is truly an interesting geologic formation and one that is obviously restricted to very active volcanic regions like the Galapagos. 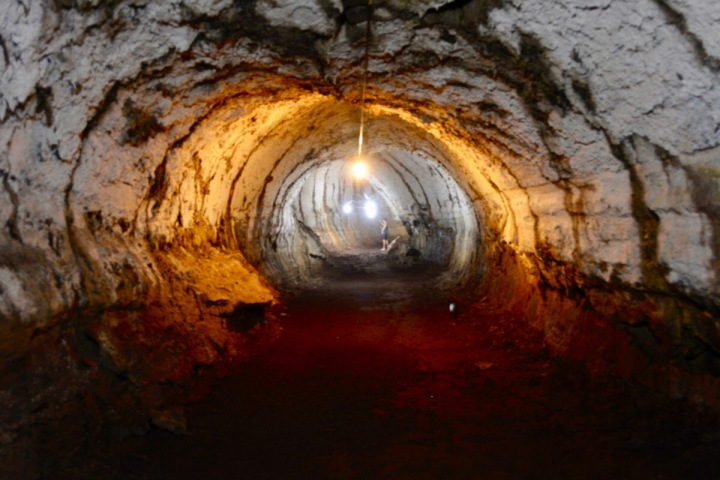 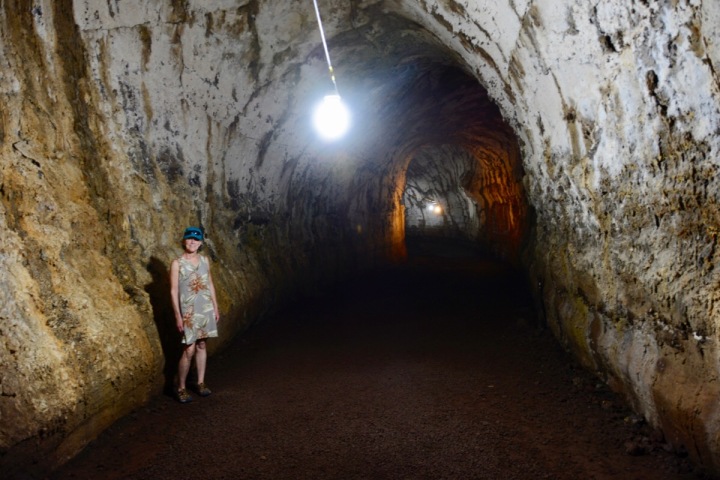 Kathy in the lava tunnels 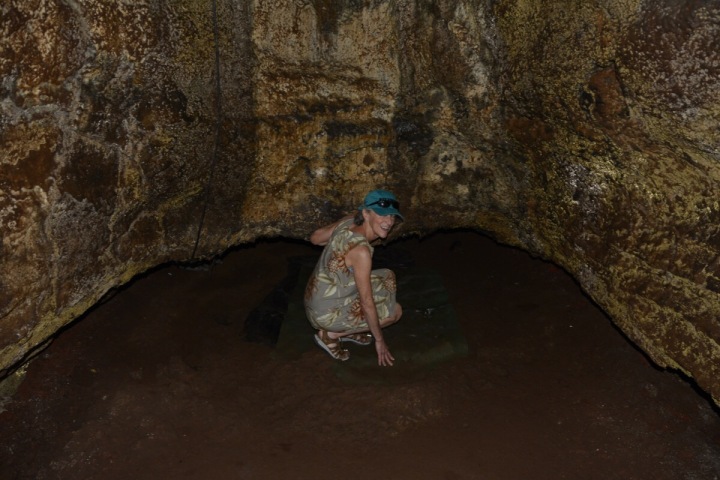 A very low ceiling to navigate

We returned home from our tour with Marco around 5:30 and decided to relax at home before doing some walking around town and then heading to dinner. Two blocks from our house is a street that is lined with a dozen or so separate restaurants that are like individual kiosks selling various versions of primarily seafood that is so plentiful here. Each evening, the street is blocked off on both ends and each restaurant sets up tables in the street and then puts out their fresh fish for you to choose from. You can also order from a menu of many local Ecuadorian delicacies, but the fresh fish wrapped in foil and cooked on the grill is the real attraction here. As you walk down the block looking at the various food for sale, “hawkers” greet you with their menus in hand for you to sit at their tables. Since Marco had given us the names of two of the vendors that are his favorites, we felt compelled to eat at one them. The entire block is filled with tables and people, both locals and tourists with a sense of adventure, enjoying their evening meal. It is an amazing scene. 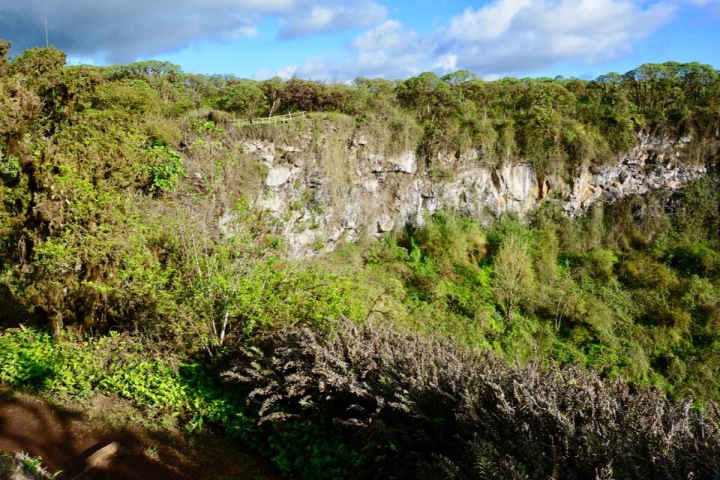 After dinner, we stopped by the Galapagos Deli once more as I had spotted that they had homemade ice cream for sale earlier when we there for lunch. A delicious cup of mango and banana ice cream finished off the evening before our several minute walk back home. We were heading out in the morning to North Seymour Island and another adventure.