After such an amazing day at Empakai Crater on Sunday, I think we were all prepared to get back to work on Monday morning. Mondays are typically the busiest day at the clinic and the volume then drops throughout the week. We had several patients we were expecting to see that we had told to return – a Maasai woman with a large plexiform neurofibroma on her scalp, the young boy who had the lumbar puncture on Saturday and the mother of our patient with the cerebellar problems as she had no phone for us to contact them. None of these patients showed, but instead we were swamped from the get go and it was quite clear after a short time that we were going to need some tight control on the numbers as well as triaging patients to make certain they had real neurological problems. 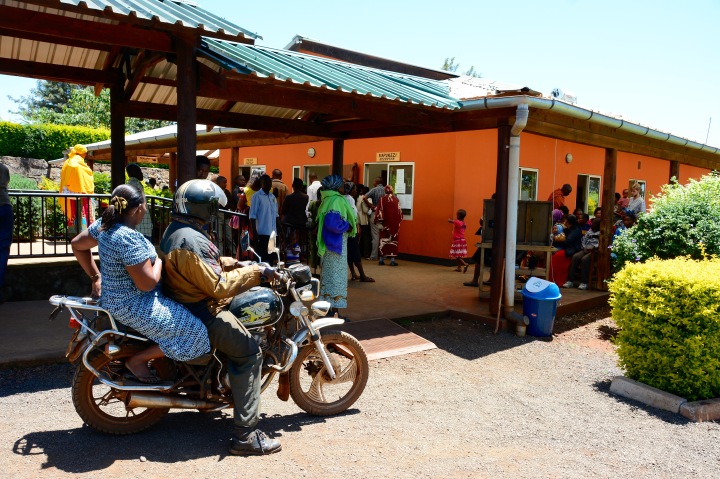 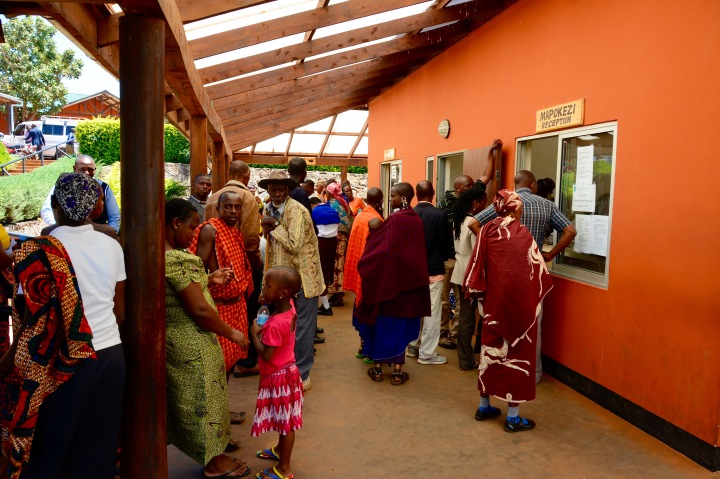 The crowded reception area on a Monday morning

Sokoine and Angel had done an excellent job announcing to the community of Karatu and the surrounding districts that we would be in full swing this week for our neurology clinic and immediately after morning report we began to see patients. Reception was keeping track of the numbers and within a bit more than an hour we were at 30 neurology patients and more were still coming. I told Sokoine that we could see 32 patients for the day which meant 16 each for Jess and Jackie barring any emergency patients that needed to be seen. By the end of the day, I believe they had a list of approximately 28 patients that were sent home to come the following day. The rest would wait until they were called, often spending the entire day waiting to see us. Young Daniel from Rift Valley Children’s Village had decided to spend this week with us after his experience last Friday and Saturday, and we also had Dr. Isaac and Angel working with us so all was well. 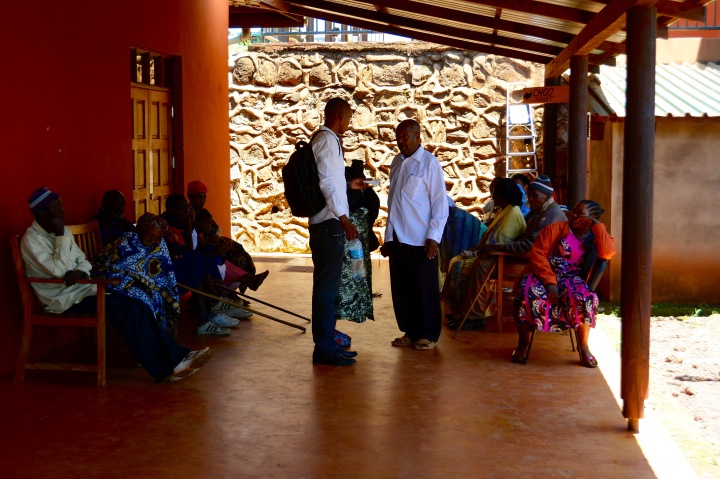 Our Neurology waiting area outside the night office and ER 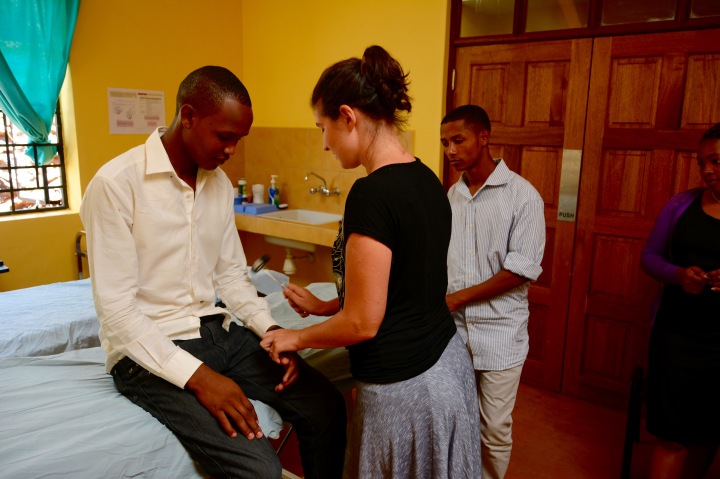 Daniel translating for Jackie while she’s examing a patient

Jackie had her fair share of pediatric cases, many of whom were developmentally delayed which is unfortunately much of what we see on the pediatric side here. She was also able to see a number of epilepsy cases, some of which were follow up patients doing well on their medications. Jess’ population of adult patients were unfortunately heavily weighted on the headache end of the spectrum. Patients coming in mentioning “kichwa” (headache) were the norm and it became a running joke that we could almost write the amitriptyline prescription before the patient entered the exam room. This was, of course, a gross oversimplification of the work we’re doing here, but there did seem to be an inordinate amount of headaches on Monday and I give Jess a huge amount of credit for fully evaluating each and every patient when it did seem they were leaving with the same medication each time. 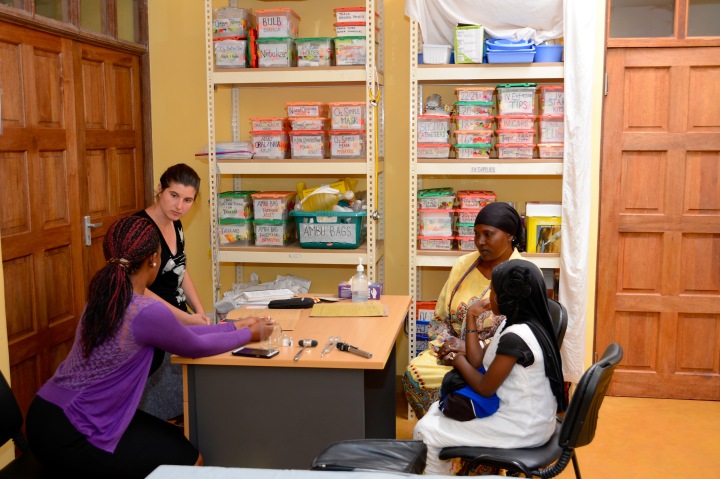 Angel and Jackie taking a history 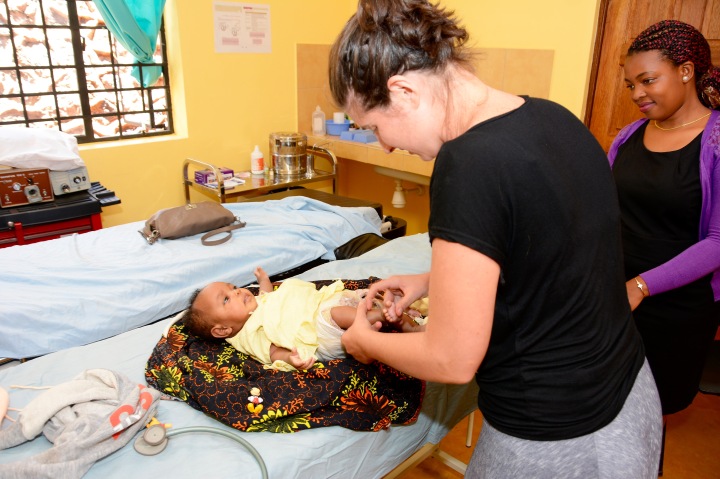 Jackie doing what she loves most – evaluating a little baby

I had mentioned that several patients who we had expected to return today did not. One of those included the little girl who we had seen last Friday with cerebellar findings and who needs to have a CT scan. We were successful in raising money for her scan, but are now in the process of trying to find her as her mother couldn’t even afford a cell phone so we had no way to contact them. We had asked mom to return today, but she didn’t. We will hopefully be able to track her down so she can get scanned before we leave. This is often the problem here in Tanzania in that time and people’s schedules move at a much different pace here and are driven by very different values, often far more real, than ours. Whether someone can afford a cell phone, or a ride on a “piki piki” (motorcycle cab), or the 5000 TSh ($2.50) to see us may dictate whether they come to clinic to be seen or not. I’ve mentioned before that if patients can’t afford to pay for their visit with us we will still see them, but of course we can’t advertise that or it would become the norm. We can only help those who make it here to see us and we think often of those who do not come, but should. We are seeing so many patients, yet I am sure that number is far exceeded by those who never make it here. We can only hope that number will become less and less over time.