With our initial mobile clinics now over (we still have Rift Valley Children’s Village next week) we are finally able to focus on our work at FAME’s main campus with our advertised days for neurology clinic would begin today. Last week, we were able to spend two days seeing neuro patients in advance and I was very impressed with the number of follow up patients we were seeing which is always a good sign that patients are coming back to see us and are compliant with our therapies.

The morning didn’t exactly start off as planned, though, as FAME had planned for some time to have a workshop today and tomorrow that would include much of the medical staff and included our main interpreters, Sokoine and Angel. We had Dr. Anne to work with as she was assigned to the neuro team, but we were without an additional interpreter for us to run a second room. We already had patients piling up before we were even able to get started and after a bit of hectic negotiating, Susan found a wonderful translator for us from the Rift Valley Children’s Village. Daniel is an 18-year-old young man who has passed all of his national exams and is continuing on in secondary school with the hope of becoming a doctor one day. He arrived by mid morning and though initially quiet, quickly became an essential member of our team.

This always been an issue for us as we continue to rely on FAME’s manpower to staff our clinics and even though our working with a clinical officer or doctor benefits FAME, it is still removing someone from their rotation of work and given the already huge volume of patients they are seeing even without our clinics added on, it is difficult for them. My ultimate wish for our program is to obtain adequate funding to enable us to essentially pay a part of the salary for the clinicians who will work with us during our time here as well as follow patients in between our visits. That will be essential.

Daniel translating with our young girl with cerebellar problems

Following Daniel’s arrival, he began to see patients with Jackie and I sat in on the evaluations as Dr. Anne was working with Jess for the day. Being the pediatric neurologist here (and the only one in Tanzania at the time), Jackie’s was trying to see all the children that came. Our first patients was a delightful 11-year-old girl from the Karatu area who was accompanied by her mother who complained that her daughter was having difficulty walking and trouble with her eyes for the last five years or so and that these symptoms were getting worse. Sure enough, she had very definite nystagmus predominately to the right with some torsional component, dysmetria on finger to nose testing and ataxia on gait testing. She was also complaining of some headaches. It was quite clear that she would require a CT scan to rule out an intracranial (and likely posterior fossa) mass before we did anything else. When we discussed this with the mom (they are Iraqw from the Karatu area) she was quite clear that they could not afford a CT scan which would have to be done in Arusha at a cost of at least $200 and it would be for some time before our scanner will be up and running. Since Sokoine, Angel and William, the three individuals who would be the most knowledgeable as to whether we had any extra funds sitting somewhere, were all away at the training session, we would have to wait until next week to discuss her case further with them. We know, though, that it is highly unlikely that they will have it. Having our own CT scanner available in the future will obviously make these types of situations much more manageable. We’re just hopeful we can do something to help out this family before we leave.

If anyone is interested in helping to fund the CT for this child, please let me know by email. You can go to the FAME website (www.fameafrica.org) and donate online. Just include the message “CT scan for young Neuro patient” and it will be directed appropriately. Thanks.

We continued to have great pediatric cases throughout the day for Jackie and she was the happiest pediatric neurologist in all of East Africa (as well as the only pediatric neurologist in all of East Africa). We had a cute young autistic child whose mother worked at Gibb’s Farm and had been doing all the right things for her up to date. There were some odd sensory integration therapies that mom was paying for, though, that we did not believe were helpful and thought they should discontinue as the cost was high for them. The mother had almost gone home as her daughter was so difficult to manage waiting for us, but luckily she stuck out the wait. I had to actually run after the young girl and practically tackle her outside our offices when we ready to see her. I carried her in as she was wiggling and writhing in my arms which was no small feat. Once in the office we were able to entertain her long enough for Jackie to do her evaluation. The mom needed to be seen as well, though, so their examinations were cut a bit short when the girl decided that enough was enough and it was time for her to leave. She had stuck it out long enough as had we, so we had no issue with her decision.

She saw a “floppy baby” (which is what I say I don’t evaluate as they can be very complicated) that she felt was very likely a genetic syndrome. The child has been receiving physical therapy as well as some questionable therapies that, again, we weren’t sure we’re benefiting the child and recommended stopping them. A young Massai boy came in with his older brother complaining of abnormal growths around his knees and elbows. What sounded like it might be our second case of neurofibromatosis turned out on examination to be symmetric bony overgrowth of those joints and what looked like a case of rickets. Unfortunately, we had already obtained a family history when we thought it was NF-1 and it turned out that his mother and another brother have the same problem. This threw a wrench into the diagnosis until Jackie, when doing some research while the patient was still around, found out that there is an autosomal dominant form of rickets that involves low phosphate. Unfortunately, that is one of the chemistries we can’t test at the present time. We did find vitamin D in the pharmacy and placed the child on that as it was the only thing we had here to offer. 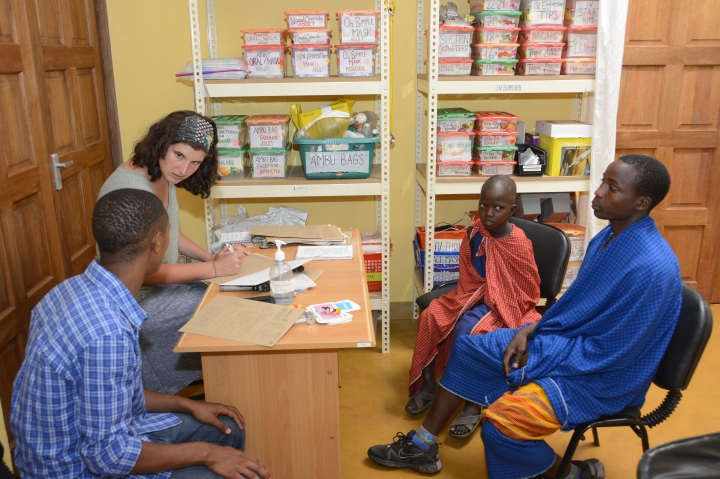 Jackie and Daniel evaluating our your Maasai with rickets

One of last children of the day was a 15-month-old boy whose aunt had brought him in and had been seen by Verena, the long term pediatrician volunteer here at FAME, earlier in the day. He had been having fevers and was very lethargic, but all of his studies had been negative here as well as when he had been seen at several other locations. We just didn’t like the look of the patient and decided that he needed a lumbar puncture to make sure that he didn’t have a chronic meningitis. His fontanelle was still open which wasn’t normal, but it wasn’t bulging. Though would have loved to have had a CT scan first, it was impossible to send him to Arusha for one and we knew that we couldn’t really send him there for care either. We felt the likelihood of a contraindication was very low and didn’t fit with the fevers so we decided to proceed. The child was incredible strong and wasn’t happy once we positioned him and it was a struggle that went on for perhaps 20 minutes, but Jackie was persistent thankfully and we were able to get clear spinal fluid and an opening pressure that was high normal and likely somewhat elevated by his screaming. I had my arms wrapped around the baby holding him and towards the end of the procedure I had sweat dripping in my eyes which were burning horribly such that I had to squeeze them shut just to continue. It was one of those comical situations that we laughed about after all was well and all of us couldn’t wait to get home and shower. We sent the baby home as the aunt was actually breastfeeding her own baby and the other family member with them was pregnant and looked ready to deliver. We asked them to come back on Monday so we could check him out again.

We had planned to go out and eat at Carnivore that night, so it was a much needed excursion, both mentally and physically, to relax with good company along with the very best grilled chicken I have ever tasted, fries, and, of course, a cold beer. It had been a trying day for all. We have clinic again tomorrow and we all were looking forward to it.