As this is my tenth visit to FAME I’ve been able to work out a few of the bugs at least and one of those has essentially leaving enough time at the end to do clean up. Even though we had four patient packed days of clinic at FAME it still seems that there are always those patients who somehow come after we’ve finished those days and started on mobile clinic. This is why I’ve always left at least one or two days for us to see those overflow patients. A number were told to come back and a number just happened to hear that we were there for a few more days. Either way, Friday turned out to be a chaotic day that required all three of us to see patients.

Payal started off seeing a few adults, but later in the morning she was inundated with young patients with various neuromuscular patients brought by a wonderful Norwegian man who has an orphanage in Mto wa Mbu. I had met Stale (pronounced Sta-le with a soft “a”) a year or so ago when he brought three of his children to FAME for me to see. Two were brothers with muscular dystrophy and the third had a more static problem that was most likely due to a polio infection or some other enterovirus 5 years prior. He had also brought with him a young Maasai boy who I had seen in September 2013 when he was admitted to the hospital with what they thought may be polio, but after I’d seen him it was clear that he had muscular dystrophy. Unfortunately, we didn’t have any family history to help us with things and we are also unable to get the most basic blood tests here let alone genetic testing. Stale not only cares for the children in the orphanage, but he also helps out many Maasai families in the nearby areas by transporting them for necessary medical care. Everyone who has met him has been totally taken by this selfless man who cares so much for these children. 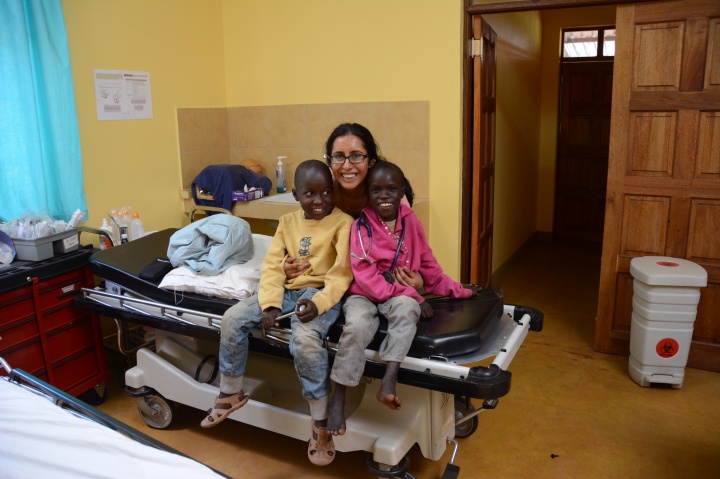 I saw his vehicle pulling up with three little wheelchairs attached to the roof rack of his Land Rover – they almost looked like chariots! In his vehicle were packed ten children all with various neurologic issues, but the bulk of them with neuromuscular disorders. Brothers with muscular dystrophy, the young boy we had diagnosed with polio previously, the young Maasai boy I had diagnosed over a year ago and a new young boy with horrible kyphoscoliosis that we were seeing for the first time. Payal had fully evaluated him and determined that he had mainly atrophy and areflexia with reasonable strength for his given muscle mass. She feared that he had spinal muscular atrophy, a progressive motor neuron disorder. We discussed the case and decided that he was not progressive and most likely had previously had poliomyelitis which meant that he wouldn’t progress. His kyphoscoliosis was so severe, though, that he is very likely to suffer significant pulmonary complications going forward. Recognizing this and practicing some good prevention will likely save him from suffering at least some of these issues.

Payal completely bonded with these children as you can see from their group photo taken. These young boys with muscular dystrophy will not have normal life spans, but it is clear that they are very happy where they are currently and for that alone Stale is a true hero. Most of them were abandoned or mistreated by their families – though the young Maasai I diagnosed over a year ago is still with his family and Stale is merely helping them. I had once given him $100 from a generous family back home and he suggested that I give half of it to the mother of the Maasai boy as she could also use help. A hero or a saint?

Meanwhile, Christyn dealt with most of the adults that day which included a gentlemen with memory loss at the age of 55 and who had previously been evaluated including a CT scan at KCMC (Kilimanjaro Christian Medical Center) and based on the son’s account was told that there was nothing they could find. We had initially seen him last week and the whole story didn’t make much sense and they hadn’t brought us the scan or any of the records so we had asked them to come back. We took one look at the scan which had lots of little black holes, or small strokes, and knew immediately what the problem was. So had the radiologists at KCMC given the number of small arrows indicating the multiple lesions. It was clear the son hadn’t been satisfied with their explanation and was looking for some miracle, but we had none to offer. We made sure he was taken care of from a stroke standpoint, but that will not reverse the effects of all the strokes he’s had.

All in all, we had seen 35 patients that day which was the most we had seen in any one day at FAME and given that it was not a regularly scheduled neurology clinic, that was quite impressive.

The following day (Saturday) we had a number of patients early, but things slowed down around lunchtime and we actually were able to leave campus early. There is a very nice hike that goes above Gibb’s Farm into the Ngorongoro Conservation Area towards the crater rim and to an area called the elephant caves. At this site there is a large amount of iron and other minerals in the ground that the elephants excavate and eat. There are lots of signs of the elephants in this area and they actually come down to Gibb’s Farm and the village of Tloma on a regular basis, usually up to no good such as raiding someone’s vegetable garden. Since it’s in the NCA you have to be accompanied by a guide (ours was Elle) who tells you about the plants along the way and any wildlife you might see. We were there late and had to get our before the animals came out of the woods, but there are gorgeous views looking back to Karatu all along the trail upwards.

(PHOTOS OF THE ELEPHANT CAVE TO BE ADDED SHORTLY)

We were all meeting for pizza and drinks at Frank and Susan’s that night as a farewell to us and other volunteers that would be leaving shortly. It’s always great to relax together and share experiences and hear Frank’s stories. I suspect most of them are true 😉 Everyone had planned to go out dancing that night afterwards, but everyone seemed exhausted and some of us were leaving for the crater very early in the morning.