We had decided to start our drive very early on our last day and leave just before sunrise. We would be eating breakfast out on the drive rather than in camp and planned to come back after noon for a hot lunch before our departure home. Everyone met at the mess tent at 6 a.m. in preparation for a 6:15 a.m. departure. There was definitely a chill in the air and it had rained slightly overnight which kept the dust down just a bit to be manageable. It was a gorgeous sunrise and the sky remained all pastels it seemed forever.

We almost drove by our first sighting, but they were four bat-eared foxes sitting just outside of their den and alongside the road. They are nocturnal animals and the only time to really catch them is either right before sunrise or immediately after. They are extremely shy animals and incredibly cute. 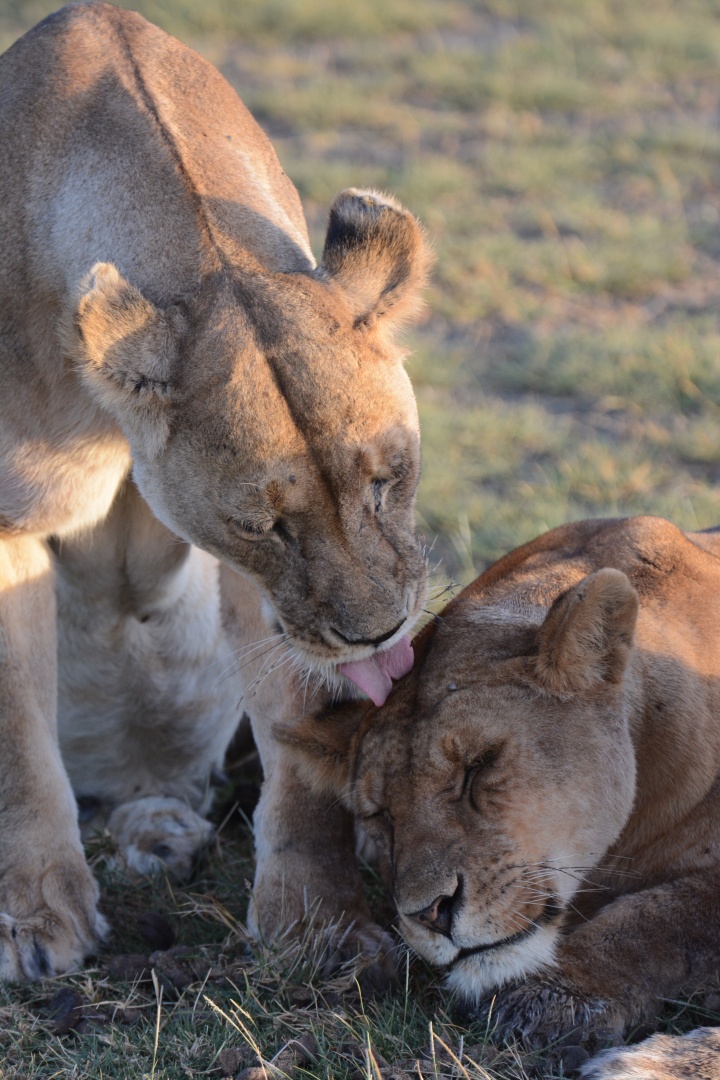 We drove back to the Big Marsh to look for the lion pride and ran across four females all lying together and just waking up from their naps. They didn’t look like they had eaten anything over night so we decided to watch them for a while to see what they were up to. Shortly thereafter, the four got up and looked as though they were on the prowl for something. As they traveled up and over a nearby ridge we followed them into another marshy area where they again decided to take a break and lounge a bit. We watched them from afar while several other vehicles came into the area to watch “our” lions as well. A lonely jackal was following them which is a good sign as they often scavenge off of lion kills.

At one point we thought one of the baby cheetahs from the other night was near the jackal only to realize that it was an african wild cat. One of the other safari vehicles took off after the cat, but Isaac had spotted an adult cheetah up on the ridge and we decided to take a look. Though cheetahs are usually unfazed by vehicles, this one was on the move and most likely due to the presence of the lions as they are mortal enemies and the lions would jump at the opportunity to kill the cheetah without a thought. We followed her for a bit and then went back to the lions who were still just lying around. We decided to travel a ways onto one of the ridges in between the marshy areas so we could eat our breakfast that had been packed for us. It was so amazing sitting out of the vehicle (in a very safe area that Isaac made sure of) and drinking our coffee and chai with our breakfast. It was definitely a highlight. Hannah decided to climb one of the trees nearby even though she hadn’t done it since she was a child and luckily didn’t manage to hurt herself, though if she had there would have been plenty of help given all the nurses and doctors on site. 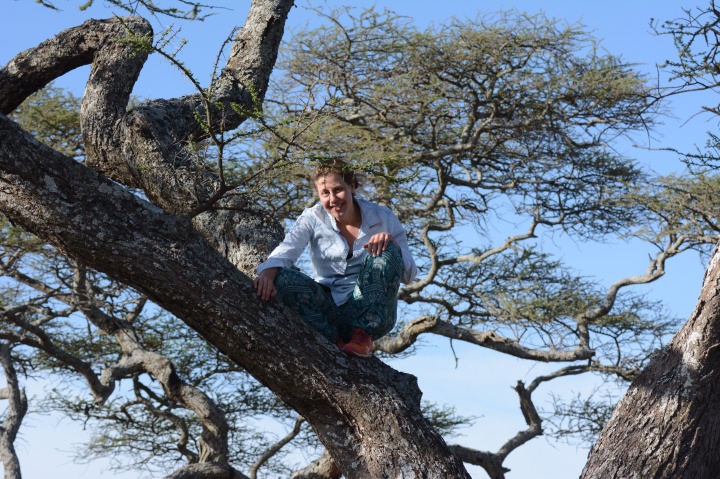 After our breakfast and checking the lions once more we decided to take a long drive to some distant areas from the marsh. We did run across another cheetah relaxing in the shade, but little else animal-wise. Cheetahs are always on the lookout, both from a standpoint of looking for prey as well as protection. They are very vulnerable to attacks by lions or leopards and so are always seen with their heads up and looking around as opposed to the lions who sleep without a worry on their minds as they are prey to no one.

We eventually made it back to our four lionesses who were still relaxing in the shade, but seemed to be positioned expertly to keep an eye on the water hole below. A group of zebra were milling around up above and since it was getting to be around noon we thought there might be a chance they were thirsty and would come down regardless. We sat on the ridge watching the lions and it seemed the zebra had decided to avoid the watering hole. After almost two hours of watching little if any movement by the lions or the zebra we decided to wait another 15 minutes and if nothing happened by then we were going to head back to camp for lunch and call it a day.

We had now been watching these same four lions for the last several hours, or since 6:30 a.m. to be exact. It was one of those situations where none of us wanted to give up on the chance of seeing these lions hunting, but we also had a time limit as we had to be driving through the gate at Ngorongoro by 6:30 p.m. otherwise they lock the gate and we’d have to spend the night on the crater rim – not a good idea at all as we all had to be at work the following morning and there would be no place to stay on the rim.

We were sitting on top of a rim overlooking the watering hole down below with four sleeping lions spread out at various locations and it was not looking as though there was going to be any action. We had given it our 15 more minutes and just about when we were going to give up we saw the zebra in the distance coming down to the watering hole totally unaware of the lions. As the zebra slowly worked their way down to the water it became readily apparent that the lions were strategically positioned so that they could cut off any escape by the zebra. The only problem was that only one of the lions was aware of the zebra and the other three were still dozing. The zebra moved into position and the lion waited for them to begin drinking before she made a move. It was a small group of perhaps eight adults and a baby. It was clear that she was getting ready to pounce and the zebra, though always wary and skittish, were oblivious to impending attack.

It seemed like forever, but then it happened. The one lion sprung up from her hiding place and shot down the hillside straight at the zebra who quickly realized what was happening. The zebra began to scatter and it was several moments before the other lions realized the attack was on, but once they did they were immediately involved. The zebra were running up the hillside in between the lions and it looked as though they might catch one of the adults when we suddenly realized that the lone baby was lagging behind the adults and stumbling as it tried to get up the hill. It happened so suddenly, but the baby was in the grasp of one of the lions who had it by the throat and the other three were there in a flash. Within a moment, the baby was dead and the four lions were devouring it with lots of growling and fighting. 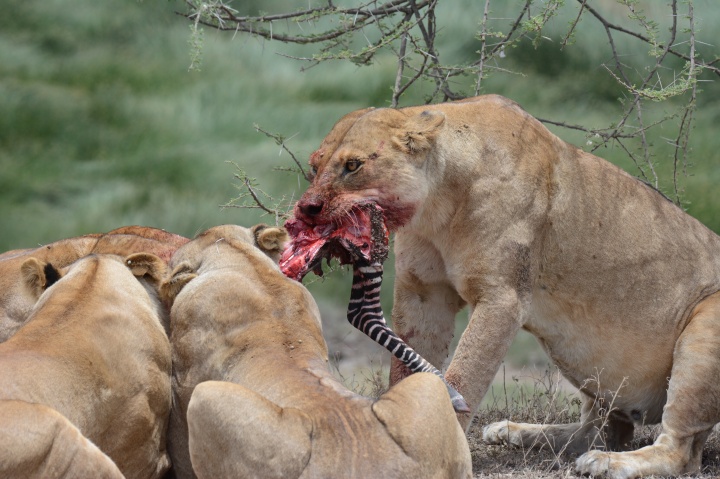 We were the only ones to have witnessed this event and we had watched these lions for almost six hours. We sat, perhaps only twenty feet from this scene as the lions finished off the baby zebra with lots of commotion and disagreement, as two other vehicles eventually came by to share. It was sad that the baby was the one to have been killed, but we were comforted in the knowledge that regardless of our presence, the baby would have been lost either way. All the other zebra sat up above us and were crying for the baby – I had seen this in the Serengeti last September after we arrived just following another baby zebra kill. It sounds so cliché, but it truly is the circle of life and you quickly realize that this is nature in all its beauty and all its tragedy. Witnessing a lion kill is not a common event on safari and many people have come for several years without seeing one. I had also witnessed a cheetah kill in 2012 and these events are by far the most powerful thing one can can participate in here in Africa. They are intense and emotion filled and something that will never be forgotten by anyone who has witnessed them.

We watched the lions for some time afterwards as they finished off their prey and eventually drove back to camp for lunch. It was such an amazing morning for so many reasons and I think we were all still processing what we had witnessed. Lunch was delicious, of course, and we packed up and piled into our vehicle for the long drive home, back up over the crater rim and down into Karatu. We made it to the gate at 6 p.m. with only half an hour to spare. It would have been a cold and lonely night had we not made it. We were all exhausted and spent the evening relaxing. I didn’t eat dinner and got up starving the next morning. Our last day at Ndutu was a monumental one.