As the rains had not come as expected and the migration had moved on to the Central and Western Serengeti, we planned to leave the NCA and drive into Serengeti National Park on the second day of our trip. This meant taking a very long and dusty drive far to the south of Naabi Hill which is where most safaris enter the park coming from Ngorongoro Crater.

We had a wonderful breakfast at camp and then left for our long drive at around 7:15 a.m. A short way from our camp we ran across a small group of bat-eared foxes sitting just outside of their underground den. They are a very nocturnal animal and the only time to see them is just at dawn as night drives are not allowed.

We had to leave in the direction of the marshes so we first checked on the lion pride we had seen the evening before and found it very close to our previous sighting. After that we ran across a female cheetah that looked very pregnant and probably due any day. Having Kelley, a women’s health NP, and Hannah, soon to be starting an NP program in women’s health at Penn, along meant that they were both hoping to watch a birth and secretly desiring to somehow assist with it – probably a very bad idea as imagine a mother cheetah even during birth wouldn’t appreciate the fact that they were only trying to help. We left the mother to her own devices and Mother Nature which I am confident would suffice even without the assistance of either Kelley or Hannah.

We arrived to the Central Serengeti by way of the Morro Kopjes (pronounced Copies with a long “o” sound). It is a dutch word that means “little heads” and is one of the main geographic features of the Central Serengeti landscape. They are also very important to the wildlife as much of life there centers around these rock outcroppings. We drove around the Morro Kopjes area with sightings of small wildebeest and zebra herds and then ended up closer to the Seronera area which is where the airstrip and most of the camps and lodges are in the central region. On our way in we found a leopard sitting some distance away in a tree and lounging. It did have some prey hanging on another branch but it was hard to tell the age of the kill. Along the way we had also seen several old leopard kills hanging in the trees and abandoned after all but the limbs and hooves were left. We’re pretty certain that they were all baby wildebeest carcasses. 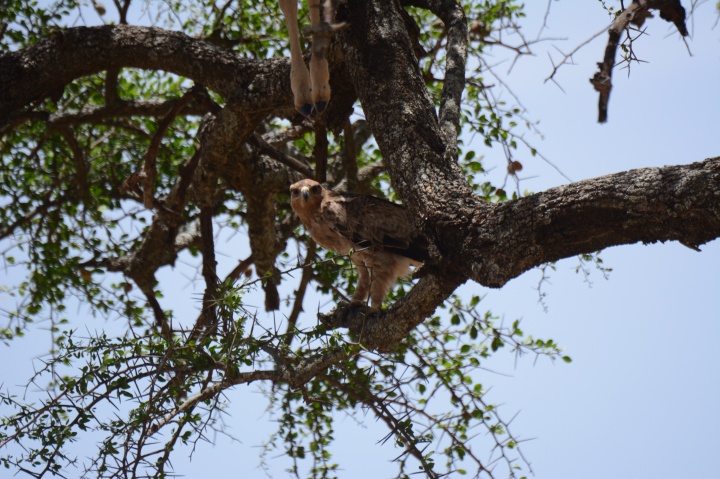 We drove along the Seronera River north and ran into a number of zebra – and also discovered that a zebra “herd” is actually referred to as a dazzle. So we ran across a number of large zebra dazzles that were acting very strange with lots of zebra calls to one another and running around in a state of anxiety it seemed. It was as if a predator was close, but the behavior was the same in all of the groups we saw. At one watering hole, the zebra kept running down into the water to drink and then suddenly all charging out of the water and then back again. None of us had ever seen anything quite like it. I will also tell you that all of us were secretly hoping (perhaps even praying) that a crocodle would suddenly jump up out of the water and snatch one of the zebra. We all saw bubles several times and swore that it was a croc sneaking up on them, but nothing ever materialized. And no, we never felt a bit of guilt for our wishes. 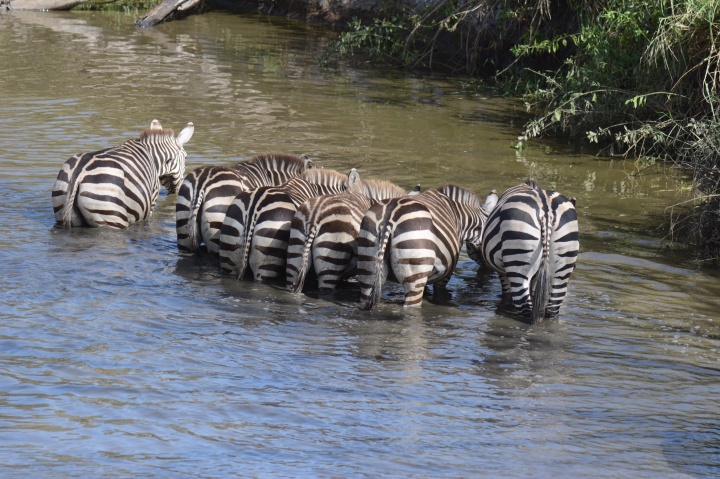 We found a few smaller lion prides during the day, but all were sleeping during the midday heat and none were worth watching for any length of time. One female was lying in the shade next to a muddy spot where a dead zebra was also lying and it wasn’t entirely clear whether she had killed it, but either way what she intended to do with it was pretty clear. Lions sleep most of the middle of the day and hunt either at night or in the early morning or twilight hours. It takes them quite a bit of energy to mount a hunt and doing that in the midday sun is something they would rather skip and probably opt in for a nice nap in the shade instead.

After driving up and down the river we started our long journey back to Lake Ndutu via Naabi Hill. Naabi Hill is the southern entrance to Serengeti National Park and the border between it and the Ngorongoro Conservation Area. We arrived to the gate and were there for almost an hour. It’s hard to imagine what could be happening in the gate office for that long, but somehow it always does and having been in that position before I can tell you that it’s mostly waiting for the internet to connect along with some chit chat amongst everyone in the office about anything. I think it’s considered a rite of passage or something, but it is certainly the antithesis of passing through a toll gate, especially with an EasyPass!

We arrived back to Ndutu near sunset and went looking for cats, but only found a single relaxing cheetah. We made our way back to camp in time to sit around the campfire before dinner and then had a wonderful dinner of soup, a beef dish with vegetables and desert. We shared stories of the day with the other guests at camp and everyone wished for a successful safari the following day.

Dreams again of lions, cheetah, zebra and wildebeest and hoping they would be in the same location for at least some of the time.