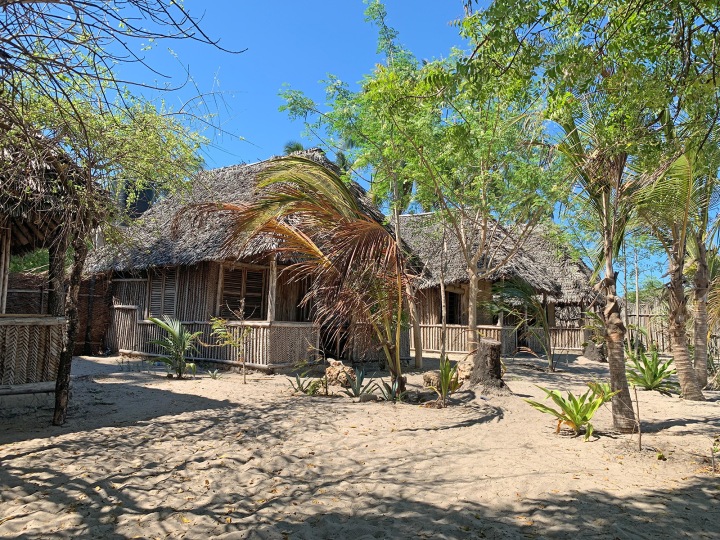 Our Ushongo Beach Bandas – mine in the foreground

Given the incredible day we had yesterday, our plans for Monday were somewhat less ambitious as we had decided to spend most of the day at the resort and around Ushongo Beach with no plans for any further ocean adventures. Despite my still very painful ribs, I had managed to sleep, albeit with the assistance of some hefty doses of naproxen, and chose to spend a few extra minutes in bed rather than get up for the sunrise again. Leonard had wanted to scout around for property in the morning with the idea of perhaps someday building a small resort similar to the one we were staying in as he has been quite familiar with this beach for many years and always felt that it would be a perfect place to end up someday. 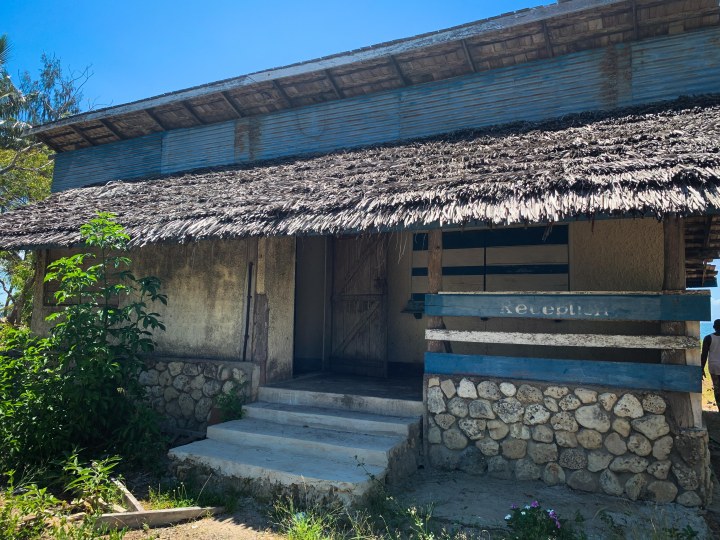 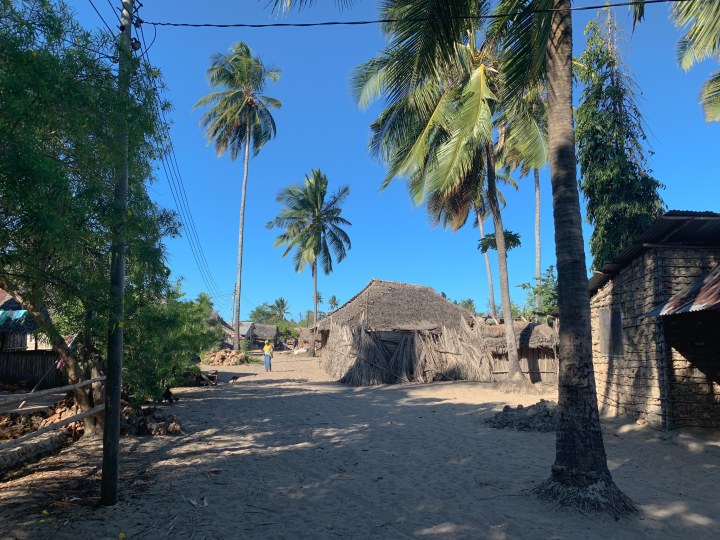 A street in the village outside of our lodge

So, after another fantastically scrumptious breakfast in our little restaurant where it seemed like we were the only guests there most of the time, the four of us began our tour of the beach area both to the north and south of Ushongo Beach Bandas along with the help of a friend of Leonard’s who knew the area well. As we walked along the beach, there were several smaller resorts that were close by, as well as the Emayani Beach Lodge, a larger and more luxurious resort, though all of them were closed due to the lack of tourists given the ongoing pandemic. As I had mentioned earlier, though, the presence of COVID had been essentially non-existent during my time here and though we certainly weren’t hugging and kissing as is the usual custom here, there were no masks or social distancing being practiced either. 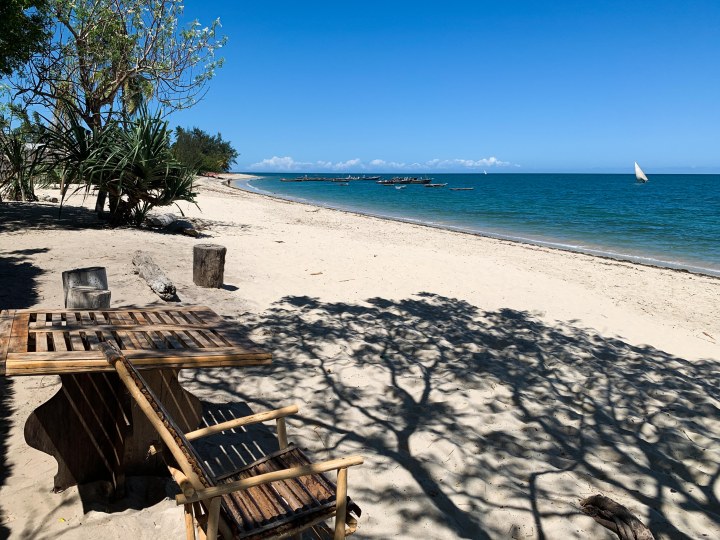 The view outside of our restaurant 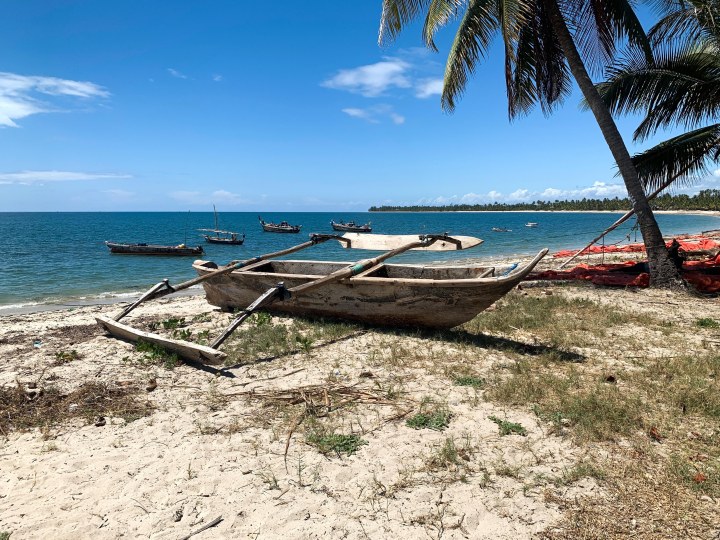 A typical ngalawa (outrigger fishing boat) of the Tanzania coast

The Emayani Beach Lodge is a lovely resort that is owned by ex-pats Annette and Peter who also own the Tarangire Safari Lodge, and they have known both Frank and Susan for some time as Frank has been providing their workers with annual physicals since the beginning and they also send anyone ill to FAME for medical care. The main building of their lodge is a beautiful open structure that is used primarily for lounging and drinks and, I suppose, also for meals when the guests are there. Their rooms surround the main building on either side. We spent time walking through many of the properties, both waterfront and inland, and I, all the while keeping my eye out for any poisonous snakes crawling in the brush or in the trees, such as the deadly boomslang, one of the deadliest snakes in the world, whose venom is usually deadly in a very short time. Having now visited the Indian Ocean and seemingly paradise, it was not my intention to finally discover one of these creatures the hard way. Being a snake lover from a very young age, I have always looked for them wherever I’ve traveled in Africa, but have thankfully seen very few up close for there are some very deadly species here including many types of cobra, green and black mambas, numerous species of viper and then the boomslang. 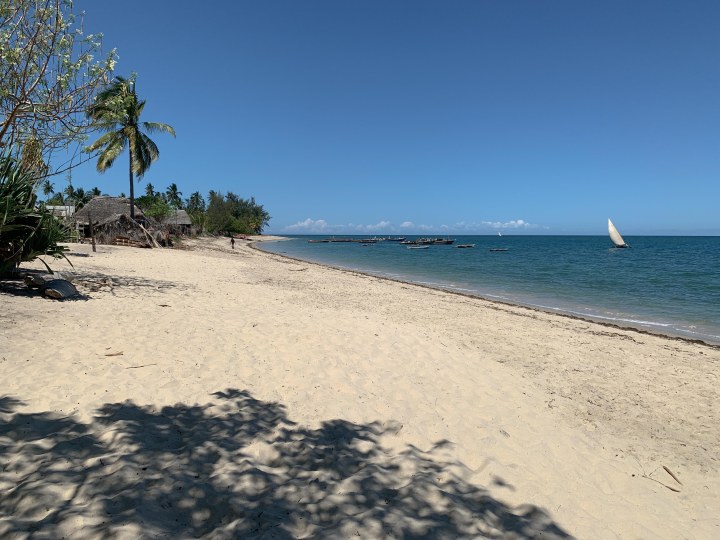 A scene of Ushongo Beach

We ventured back to our bandas around lunchtime and discovered that Enock and Amina had made us a huge plate of prawns in addition to our fresh fish and chips that were being served. The prawns had been cooked in garlic and lime juice and were just so incredibly tasty, but once again, it was left to Jones and me to share almost the entire pile of prawns as Leonard and Simon, though they did try them, were just not big fans of eating shellfish once again. We all had times for naps after lunch, having tired from all the walking up and down the beach in the morning, and later spent time with one of the fisherman who had brought his fresh catches to us once again both for dinner and to bring home. As he would sell the fish by the kilogram, Enock had to bring out his fancy balance scale to weigh everything. We chose what we would have for dinner and also what the other three would be bringing home with them, which did end up being quite a bit. 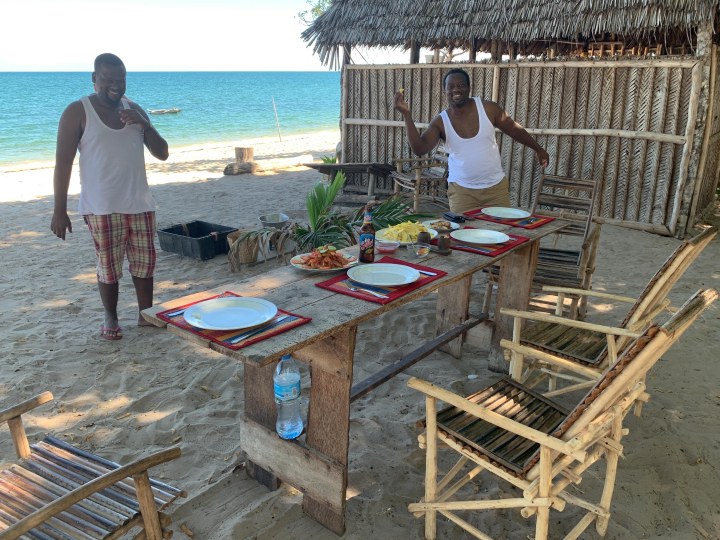 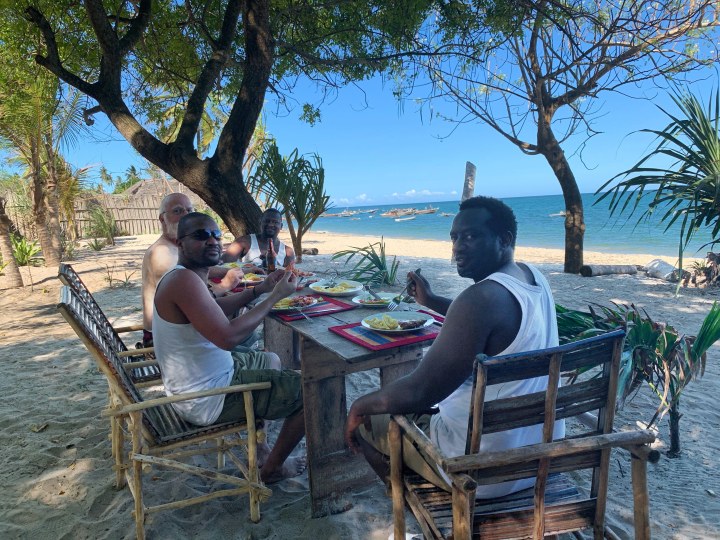 After the naps and all of the fish purchases, we decided to drive to Pangani for the day as I had really wanted to walk around the town a bit and explore. As we drove up along the opposite side of the river to the ferry landing, there were lots of locals on foot as well as several smaller trucks and vehicles already waiting for the ferry, which I suspect is on its own schedule, plying back and forth across the river the dawn to dusk. The fare is very little, for both passengers and vehicles, and all passengers have to pay separately from their vehicle regardless. Only the driver is allowed to ride within the vehicle for safety reasons according to my travel companions. On this occasion, we had decided to leave our Land Rover behind as we hardly needed it to walk around the town, which was only several blocks long, and we would save perhaps a dollar on the fare. We did have to find a willing shopkeeper, though, to keep an eye on the vehicle for us, as breaking into vehicles here, mostly to steal car parts is not too uncommon. 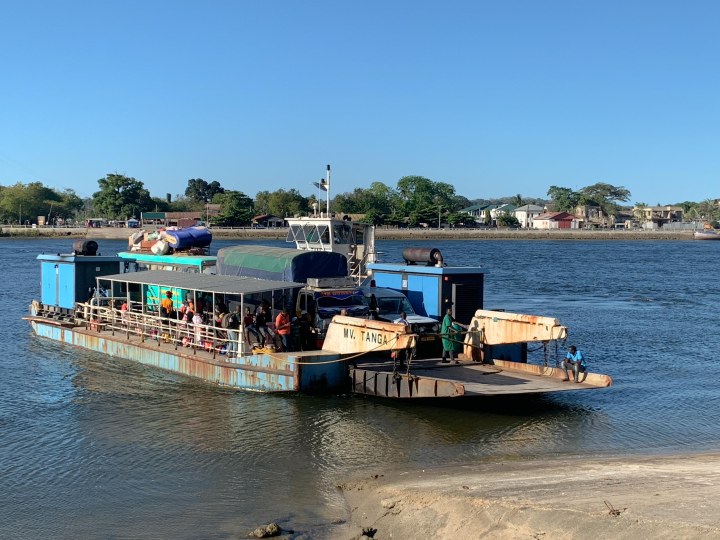 The Pangani ferry ready to dock

The initial look and feel of this town is one that seems to mostly reflect its earlier prominence in the region with many waterfront buildings that I am sure were once the center of activity, but are either no longer occupied or have been converted into other uses. Close to the ferry landing, there is a modern bank, but beyond that and the waterfront buildings that are ghosts of their former selves, there is very little to separate Pangani from any number of the other little villages you encounter while traveling. We initially walked down the street that paralleled the waterfront and was one block away as it seemed to have the most commercial activity with little street side shops selling just about everything. I remember that we had needed a cooler for all the fish and, sure enough, we found one quite quickly at one of the shops and decided to pick it up on our way back through town. We walked all the way to the east end of the town where the river fanned out into a very large area and the beach at the mouth seemed to go on forever.

The Pangani ferry ready to dock 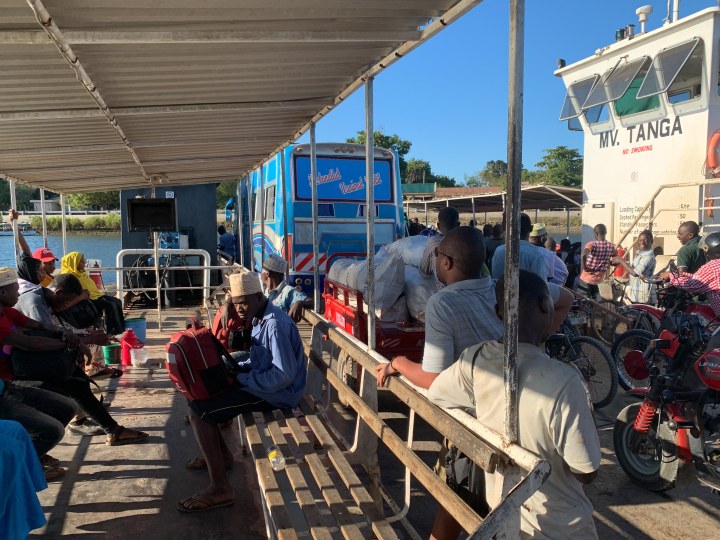 Scene aboard the ferry

We had been hoping to find someplace to have a beer, but had really seen none up until now, but heard the faint sound of music in the distance and eventually followed our ears. Sure enough, there was something that was certainly local club at the end of the road and adjacent to the beach that looked like a hangout for sailors and fishermen from town. We each ordered a beer and sat out back in these really funky benches that had fishing nets for backs, but were surprisingly comfortable, and watched locals walking across the incredibly wide beach down to the water. As we sat, the small outrigger fishing boats, called ngalawas, were all making their way home, with only their sails visible at first behind the small dunes of the beach until finally their hulls and passengers revealed themselves as they entered the river to our right. The lighting was lovely and their day, as was ours, was coming to close and it was time to head back to the ferry. We picked up our cooler at the shop as we walked and turned the corner to the ferry dock to wait for the next boat to dock and board. 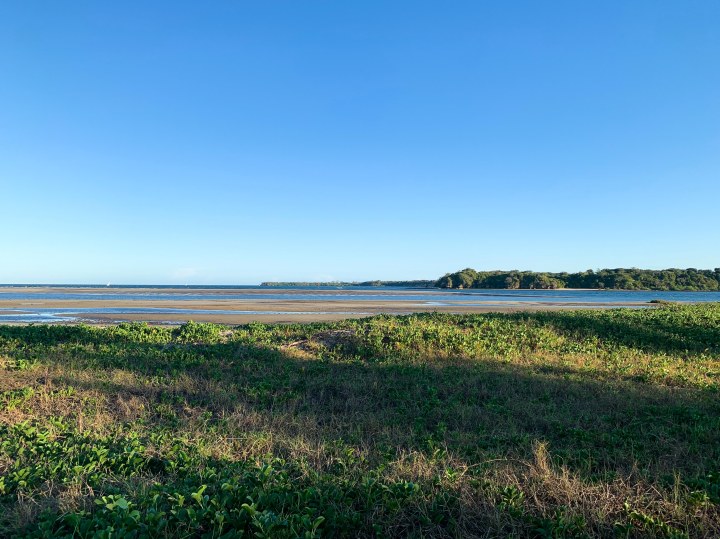 The mouth of Pangani River 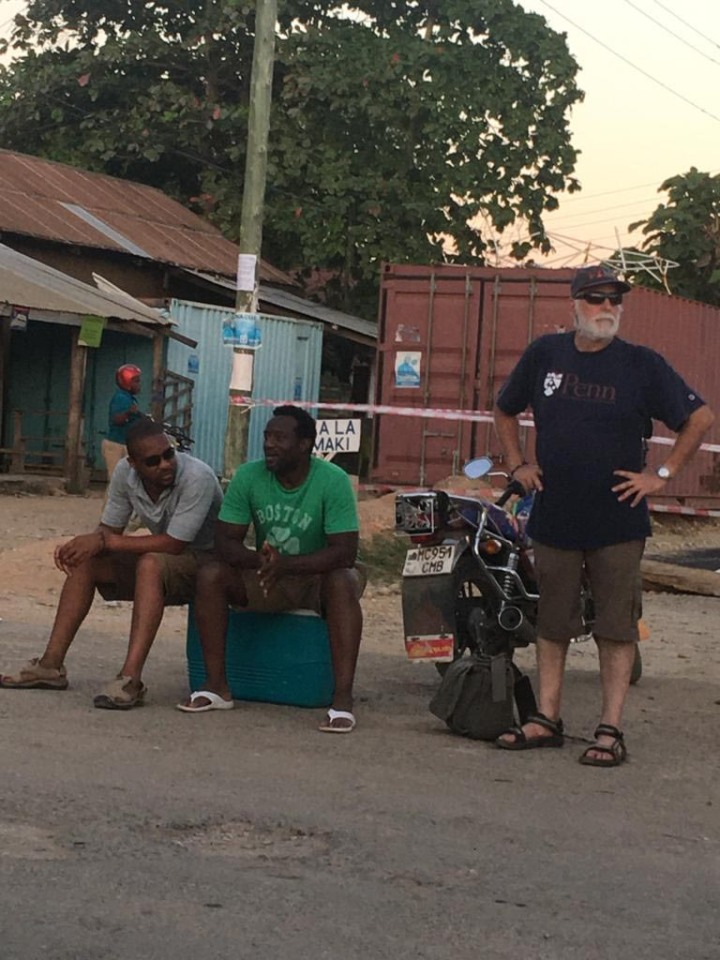 Waiting to head back on the ferry at Pangani

The drive back to Ushongo Beach, through the small towns we had now seen several times, seemed to be quicker than the other night and we had much more light with which to see. I had bought more lobsters from the fisherman and was looking forward to another incredible dinner. We were planning to leave tomorrow morning after breakfast and I knew that I was going to miss the food here. After dinner, I spent the evening on the beach with the crabs and an incredibly clear sky chock full of more stars and planets than you could ever imagine. For many, many miles there was no artificial light to spoil this amazing view of the heavens above and it seemed as though I was there alone to witness this miraculous sight, save for the crabs. They were there, sharing this near religious experience with me, scurrying across the sand by the many thousands, feeding on what the rippling shallows would bring them, just as they have done for millions of years before. It was surely another day in paradise.

Bring us his catch of the day 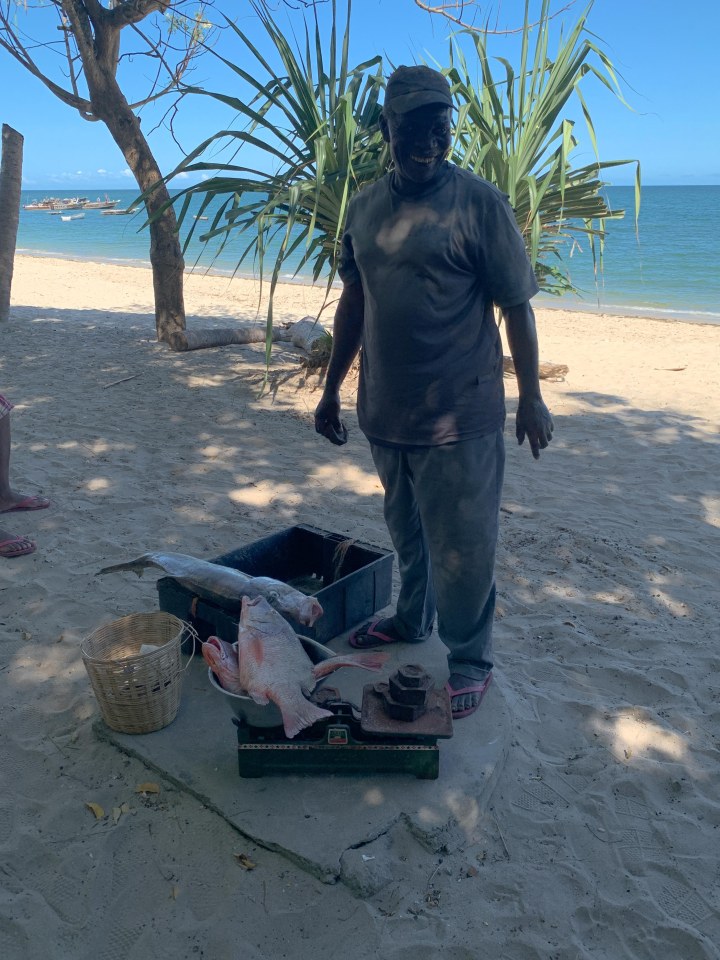 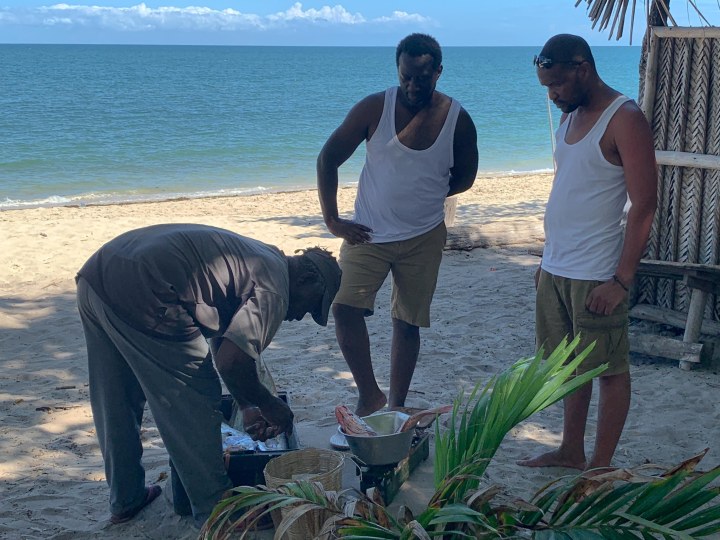 Buying fresh fish off the scale