The first two springs trips to Tanzania for me were in April rather than March, and, on the second one in 2012, I discovered why they call them monsoons in other parts of the world. That month, there were torrential rains such that the roads were just terrible and I ended up get my Land Rover completely stuck in the mud axle deep, a rare event for these tank-like vehicles, at which point I changed my future spring trips to every March. Though it seems that the reasoning behind that decision may have been slightly faulty given the amount of rain we’ve had so far on this trip, every March trip prior has been absolutely gorgeous with limited amounts of rain as this month typically falls between the short rains of January/February and the heavy rains of April/May so I guess having one bad month in eight isn’t terrible odds. The reason I am telling you this, though, has nothing to do with the weather, but rather with the fact that I have now spent my last eight birthdays here in Tanzania with second family at FAME. I have never been much for birthday celebrations (my mother would have been the first to tell you that having missed my surprise birthday party in Disneyland when I was 13 as I was having fun with my school friends and thought it was only a lunch I was meeting her for – she never let me forget that event), but the residents have now managed to remind each subsequent year of the fact that my birthday occurs here and I have become a bit more tolerant of celebrating it. Today, my birthday as you might have guessed, Amisha made certain that this tradition was not overlooked, alerting Dr. Gabriel to the fact such that the entire FAME medical staff and volunteers had the opportunity to sing me happy birthday at morning report. Even for me, this was a special event and I very much appreciated everyone’s thoughtfulness, and especially Amisha’s, as this is her second trip to FAME with plans to have more along with a career that includes global health, confirmation that giving residents this opportunity will have some impact in the future.

It was the start of our full week here at FAME seeing neurology patients and, typically, our busiest. With the rains we’ve had, though, there were not a tremendous number of patients waiting for us when clinic began that was clearly a suggestion that the weather was impacting their ability, or at least willingness, to fight the muddy roads and floods in certain areas to get here to see us. We had been extremely busy last week for the days that we had announced, matching some of the highest numbers of patients that we’ve seen in a single day (remember, we are neurologists and we do a bit more thorough histories and physicals, hence we are much slower than other specialties), so we were very excited that this was going to be a banner spring clinic. Often, when the weather of bad overnight or there is rain in the morning, patients come a bit later in the morning, though we didn’t see the volume today that we had hoped for, ending up with only about half of what we had seen on Thursday and Friday of last week. The cases that we saw, though, were a bit more complicated, at least for two of the pediatric cases.

Amisha and Angela evaluated a 6-year-old boy who had a history of probable birth asphyxia and subsequent seizures with severe developmental delay, as well as a probable aspiration that had occurred with one of his more prolonged seizures. During their evaluation, they had noted that he seemed to have a number of bony deformities that were unusual, so did X-rays of his extremities (thankfully, our plain radiology plate had just been fixed allowing them to do so) and discovered that he had severe demineralization of his bones along with multiple fractures that raised the concern mainly for some underlying bony disease such as one of the osteogenesis imperfecta variants or something similar. Unfortunately, there would be no way here for us to do any testing on the child in regard to his fractures or diagnosis causing them and they were only able to continue his seizure treatment. Having an underlying diagnosis of bone demineralization and risk of fractures as well as seizures is not a great combination as there is always a greater risk for epilepsy patients to suffer trauma as a result of their seizures from falling (this child was not ambulatory, though) or just from the convulsion itself. 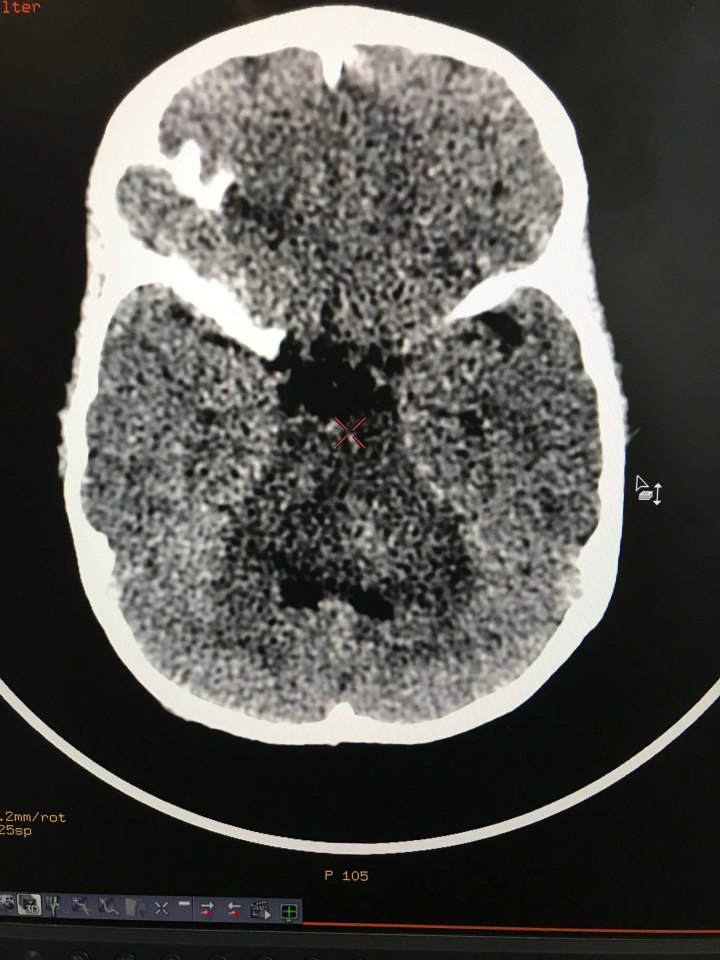 The second difficult child they saw today was a much tougher situation. She was a developmentally normal 7-year-old girl presenting with several months of neurological symptoms that consisted of double vision (she had a very obvious esotropia of the left eye), redness of the eye from decreased blink, right-sided weakness and ataxia. Her examination confirmed that she had involvement of at least cranial nerves VI and VII on the left, her cerebellum and/or its pathways and the left corticospinal tract above the decussation. There was no way for us to place this anywhere but her brainstem and we all knew that was not going to be a good thing regardless of how we looked at it. To make matters a bit worse, we had quite a bit going on patient-wise at that moment with the young boy with multiple fractures, this girl and a patient that was in the ward at the time and things were pretty hectic. 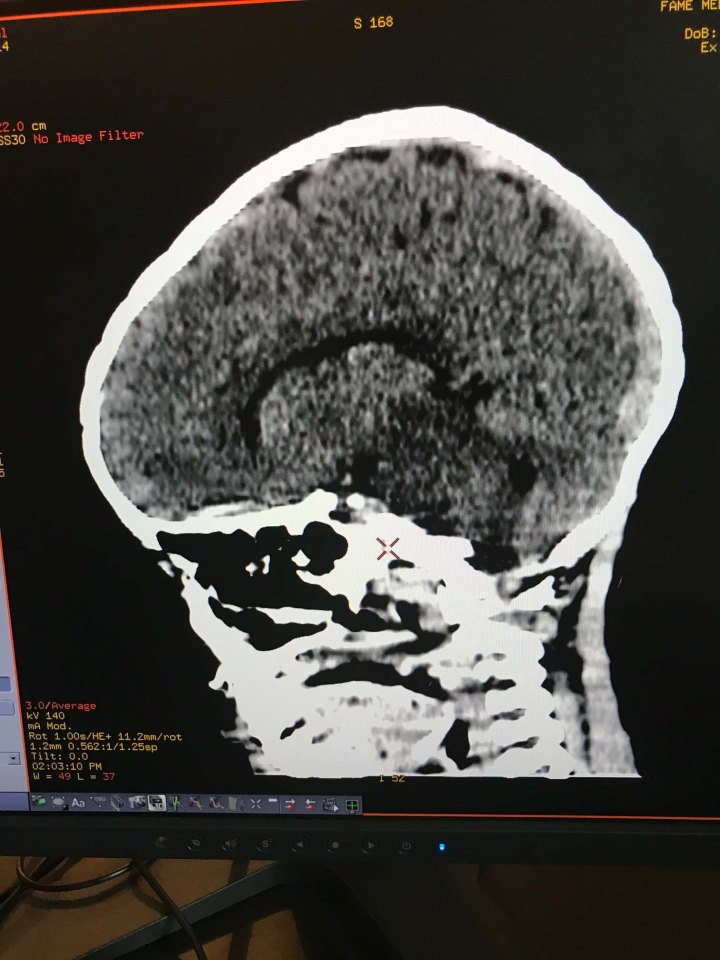 The family did not have the money to pay for a CT scan, but thankfully, they were able to pay something towards it that would allow it to be done. An MRI scan would have been much better to obtain given the location of the problem, but they would have to go to Arusha for that and it would be much costlier than just the CT scan. As I’ve mentioned before, FAME does not have the resources nor is their intention to provide free medical care to everyone, but rather to make quality medical care accessible to the residents of the Karatu district for a very reduced price. Secondly, though, we have to be very careful not to reach into our pockets to pay for the medical care of our patients as this has no sustainability going forward and creates a situation in which patients would begin to rely on help from the Mzungu (white person, or stranger) doctors and would alienate the Tanzanian doctors as they would not have the same ability to pay for things and, furthermore, they would already be aware of the problems this would create.

We were able to obtain the CT scan which demonstrated a very large mass occupying the entire mid brain, though without compression of the fourth ventricle or other CSF structures so, thankfully, there was no hydrocephalus that would have ultimately required a more urgent procedure to prevent her from herniating. The mass was most consistent with a Diffuse Intramedulary Pontine Glioma (DIPG) that was very extensive and is not something that responds in any meaningful fashion to treatment. Radiation, which would typically be offered in the US, would be done only for palliative measures and would perhaps help her to live a few months longer, but nothing more than that. It was really a horribly unfortunate diagnosis to have to provide to her parents, the fact that she was not going to survive much longer, and, in the end, even though they accepted our prognosis, asked us for a referral to Dar es Salaam to be seen at the pediatric cancer hospital which would be expensive for them to travel there as a family and they would be told nothing different than what we had told them today.

During the midday, there was an incredibly heavy cloudburst that made it nearly impossible to hear a thing either in our clinic or in the passage way outside given that they both had metal roofs on top. The noise that these downpours make is very impressive and, thankfully, they only last a short time before they are gone and most everything dries up without a trace as if nothing had ever happened. The rains can wreak havoc on the roads, though, and at one moment it can be perfectly beautiful, and the next, a slip and slid as I’ve discussed before. Given the weather and the likelihood of bad roads, combined with my past experiences as I’ve mentioned earlier, it seems the smart thing to do to have one of the FAME drivers, who are very experienced in these conditions, drive my Land Rover to the villages. Additionally, with the size of our group, we will require an additional vehicle, as we have on our most recent trips, and for various reasons, FAME will not be able to supply us with one for this visit, necessitating an alternative plan so that we will have enough room for everyone. There are many safari vehicles for hire here in Karatu and, given the fact that there have been many cancellations as a result of the current Covid-19 situation, I was fairly certain that we would be able to find something not only available, but also for a reasonable cost. We contacted Kudu Lodge here in town and they were able to supply us with a stretch Land Cruiser for a decent price that we could live with. Having the vehicle situation for next week clarified meant that there was one less thing for me to worry about over the weekend.

Since the day had relative slow, or at least steady, we decided to try to make it to Teddy’s shop, the seamstress that we have used over the last year and who we had been introduced to by Kat, our previous social media director here at FAME. Teddy has been a godsend for those interested in having clothes made, as she not only does a wonderful job and a for a fair price, but she is also great to work with and speaks some English. Of course, as soon as we decided to visit her and I had sent her a message, some later patients began to trickle in to clinic threatening our chance to get out at a reasonable time. Luckily, she was still willing to wait for us, even though we were later than we had thought we’d be, and everyone, other than me, of course, decided to have her make something for them. We were at Teddy’s for a surprisingly shorter time than I’ve spent with others in the past, which I was quite thankful for, and afterwards, we went into town to look for additional fabric designs. Everyone was apologetic that I was spending my birthday shuttling people around, but I reassured them that I couldn’t imagine anything that I’d rather be doing than driving my Land Rover in a frontier town in East Africa, something that I had never imagined that I would be able to do, and sharing my new home with others, all of who I knew appreciated that very much. Standing in the street outside the fabric stores, while the others did their shopping, watching the hustle, bustle of nearly all of Karatu’s residents doing their evening business only solidified in my mind just how lucky I am to be here and to be doing the work we do at FAME as it has truly changed so many lives – mine, those who accompany me here, FAME, my Tanzanian friends, and all of the patients who we have had the privilege to care for over these last 10 years that I have spent in this remarkable country.