It was last full day at FAME as everyone would be departing tomorrow morning, most for different destinations. Andrea and Marissa would be heading home first through Nairobi, then Doha and finally back to Philly, arriving on Sunday. Kyra would be leaving for Morocco via Dubai, meeting up with her husband for ten days there before returning home. Mike, Leah and I would be heading first to Dar es Salaam, then to Kigoma en route to Gombe Stream National Park to hopefully see some chimpanzees. 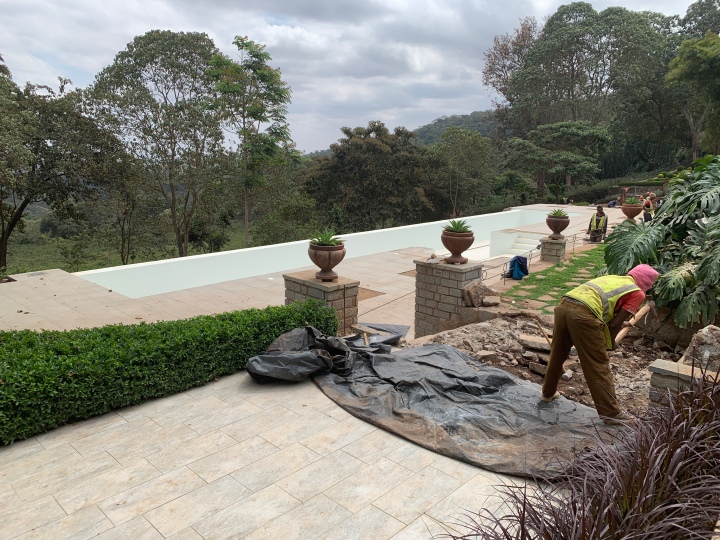 The infinity pool being build at Gibb’s

As I had mentioned, I gave everyone permission to sleep in this morning and miss morning report since they had been getting up early every morning including those on safari. I went to morning report by myself and did my best to represent the neurology team, though there were no overnight neurology patients that needed our attention so it worked it quite well that the entire team wasn’t there. We had decided to have a very large debriefing meeting for the neurology clinic at 9 AM which was perfect as I had just a few things to finish up prior to the meeting regarding patients who we had seen recently and just needed some follow up. The debriefing meeting included most everyone who had anything to do with the neuro clinics, either at FAME or on mobile, and also included the upper management (i.e. Susan, Caroline and William) who are significantly involved with the clinic from a mission, cost and personnel standpoint, respectively. 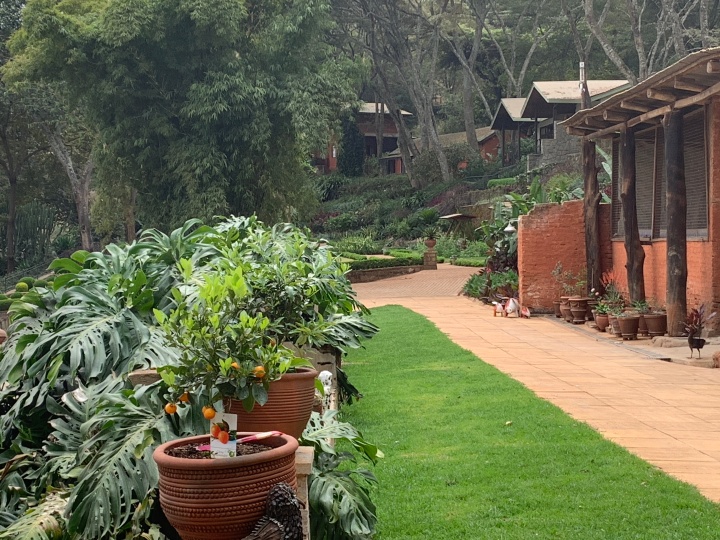 When we started the meeting, it had been anticipated that we would spend about an hour or perhaps a bit more. The meeting ended up lasting 2 ½ hours and was incredibly produce dealing with lots of aspects of the clinic, from medications and availability to how we would schedule the clinic in the future and what our hopes were for the clinic going forward. There were lots of great ideas and lots of great dialogue such that I’m incredibly hopeful that we will continue to serve the neurological patients of the Karatu district and beyond as we have since 2010 and my very first visit here. FAME has grown tremendously since I first arrived and so has our neurology clinic, now being a part of the Penn and CHOP neurology residencies and the volume of patients that we see while we’re here. 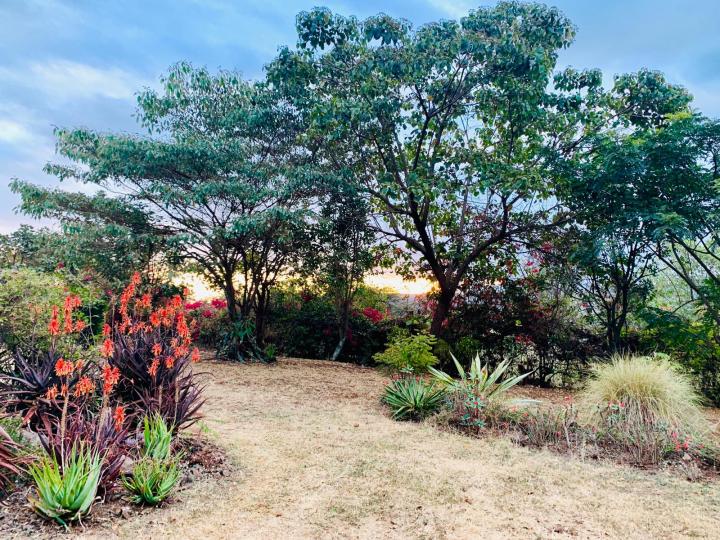 The residents had a number of things they had wanted to do as well during the morning and they could get very little done considering that those they wanted to see were all in the meeting with me. I had told them the meeting would probably last a bit over an hour, so they were all hunting me down during the meeting, though I was able to tell them at some point when I needed to leave the meeting for a bathroom break as the meeting had been advertised as BYOC (bring your own coffee) since it was being held in administration and not the Lilac Café which used to be the norm. I finally met several of them down at the Lilac after the meeting, though, and quickly discovered that they had ordered what looked like the most delicious breakfast I had seen with eggs, toast, bacon and sausage. I hadn’t eaten any breakfast as we were out of most of the food in the house since we’d be leaving the following morning and we had also run out of all the breakfast bars that had been brought by the residents. Despite the fact that it was nearly lunchtime, I didn’t hesitate one moment when asked if I wanted to order something and replied, “I’ll take one of those.” 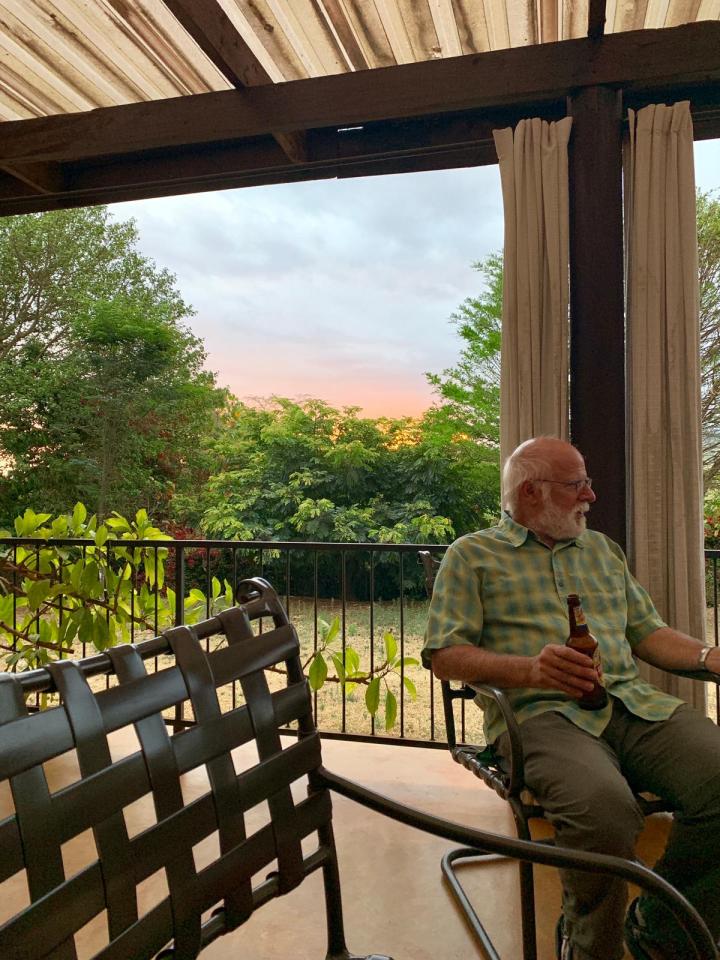 Relaxing with a Kilimanjaro and the sunset in the background

I did have a number of errands to run once we were done with the meeting and breakfast, and I had told Daniel Tewa that we’d stop by for coffee at around 1 PM, so it was important to get those things taken care of. I knew that everyone wanted to get their packing done today since we’d be leaving early the following morning, and I was also aware that there was some interest in relaxing for the day, so I left it up to everyone whether they wanted to come to Daniel’s with me or not. In the end, Kyra and Mike agreed to come along as Kyra wanted to visit the wood carver in Tloma Village and Mike wanted to visit the artist Katongo at Gibb’s Farm to possibly pick up a painting. 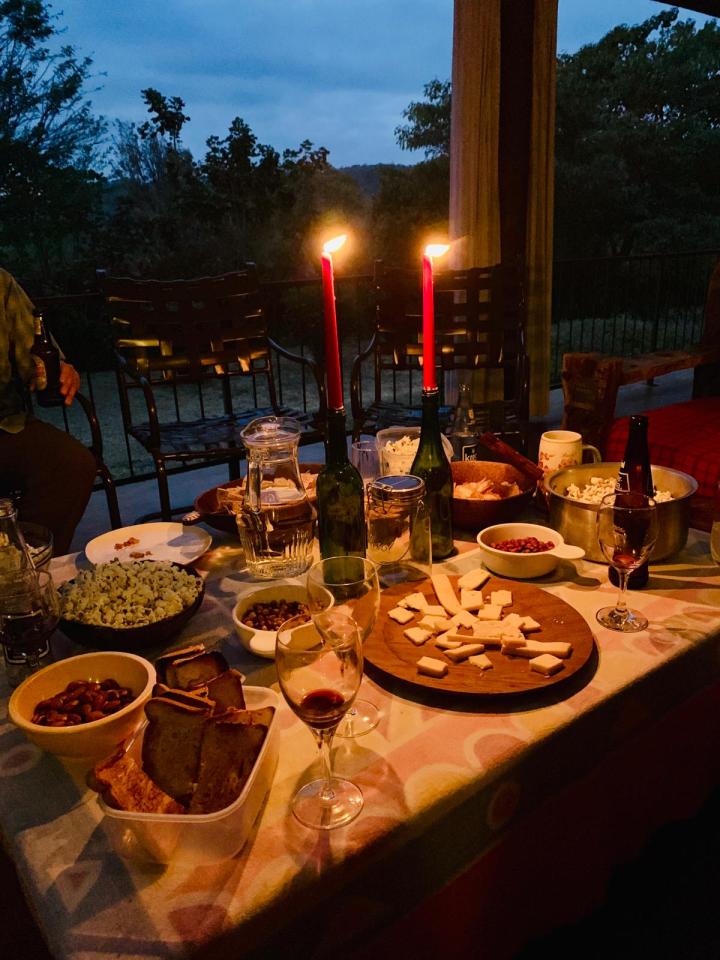 The spread of munchies at Frank and Susan’s

I had texted Daniel that there would only be three of us, but somehow, he didn’t get the message, and when we arrived to his house, he had coffee cups set up for everyone. I’ve been in this position before, and when it has happened in the past, Daniel always comments half-jokingly, that who’s ever there must drink the coffee for everyone. The coffee he makes is the true African coffee, which is boiled with milk and is absolutely delicious. The only problem with that is that Kyra can’t drink the coffee as it has the milk mixed in and she drank hot chocolate instead, leaving Mike and I alone to finish what Daniel felt was a respectable amount of the coffee. That meant at least three cups each and there is nothing timid about his coffee. We survived the caffeine infusion and, as we were saying our goodbyes to Daniel, he ran back to the sleeping area of his home and brought out seven ½ kilo bags of whole coffee beans for everyone, including Ray, to bring home. He is such an incredibly generous man and has never once asked me for anything in exchange for what he does for us and whenever I try, he just says that we’re family and he’s grateful for what we’re doing for his country. 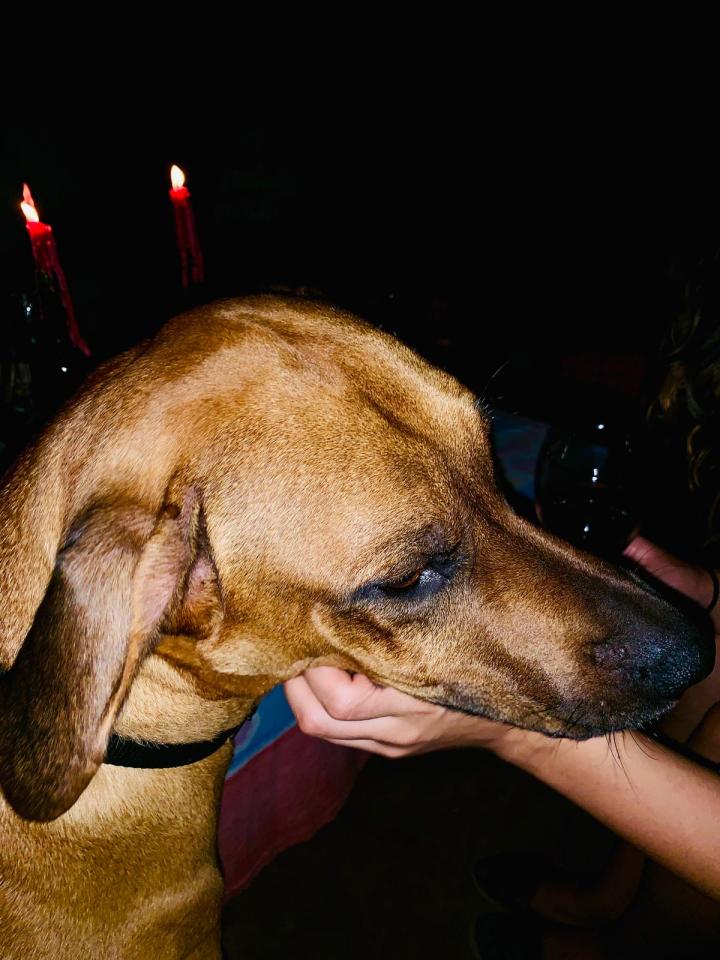 From Daniel’s, who lives on the road to Gibb’s Farm, we made our way up to Tloma Village, but given all the coffee I had drink, I needed a bathroom, so instead we went to Gibb’s first so I could use their amazing bathroom in the check in area that is wide open to the outside and sports a view of their gardens and livestock. When I bring people here to visit, I always make sure that they visit this bathroom first on our way in. I said hello to all of the waiters that know me, while Mike and Kyra walked with Katongo to his studio to see what painting he had for sale. Mike had wanted a giraffe painting that he had done and was very cool, while Kyra, who hadn’t really been planning to purchase a painting, decided to buy a wonderful lion painting that he had finished with a lion couple on it. 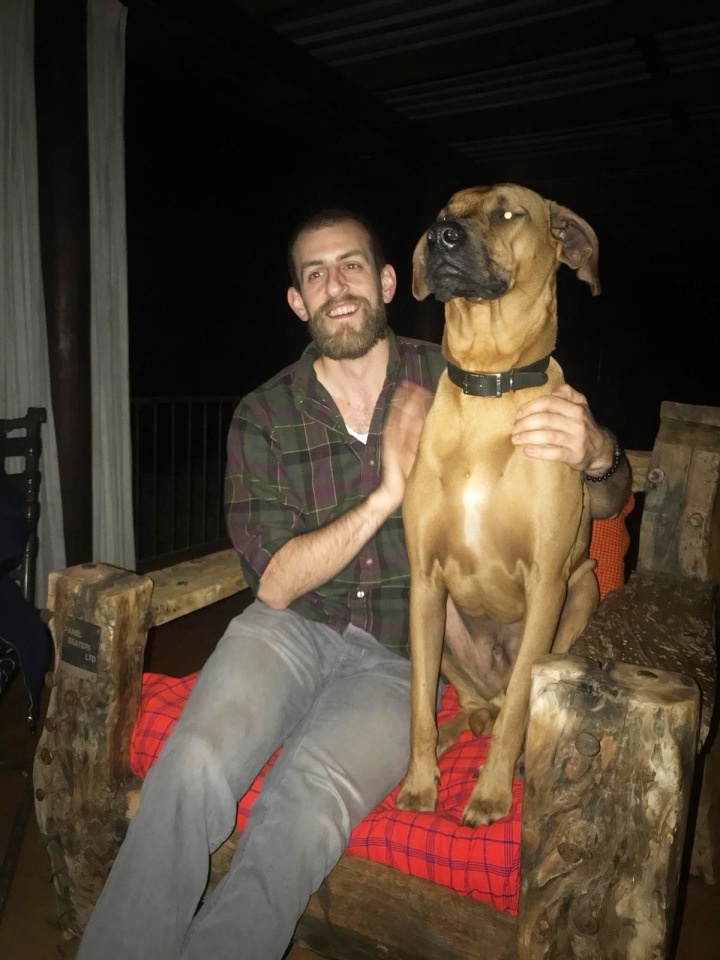 On our way back down from Gibb’s, we did stop at the Wood Carvers where Kyra managed to pick up something small and I picked up two smallish pieces of uncarved ebony to use as stands, but that required some serious haggling, not something I typically enjoy, but I felt he was being unreasonable, so set the stands back down and started to walk away on two occasions before I was able to finally purchase them. With our errands all finished, we were finally able to head back to FAME to finish packing and ready ourselves for our trip to Arusha the next morning before going over to Frank and Susan’s for the evening with all the current volunteers. 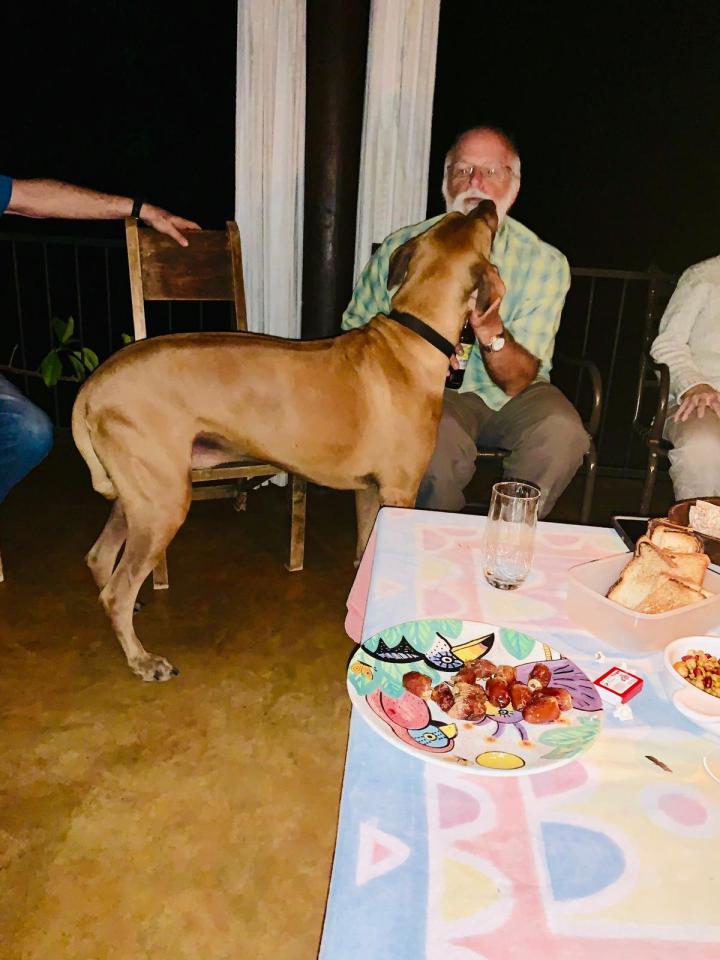 Can’t get enough of Oscar

Susan usually tries to have everyone over to their place at least once during their stay here and typically towards the end. Those accompanying me during our trip here really don’t have much interaction with her on a day to day basis as her role at FAME is more administrative than it is directly medical, and so the most interaction that everyone has is with Frank, whose personality is generally bigger than life and hard to miss. The visits to Frank and Susan’s house, though, allow everyone the chance to meet Susan in a more social setting and also allows Susan a chance to get to the know the residents better. For tonight’s event, it involved lots of munchies like popcorn, samosas, cheese and toast (there was apparently a run on crackers in Karatu and none were available) along with lots of beverages. 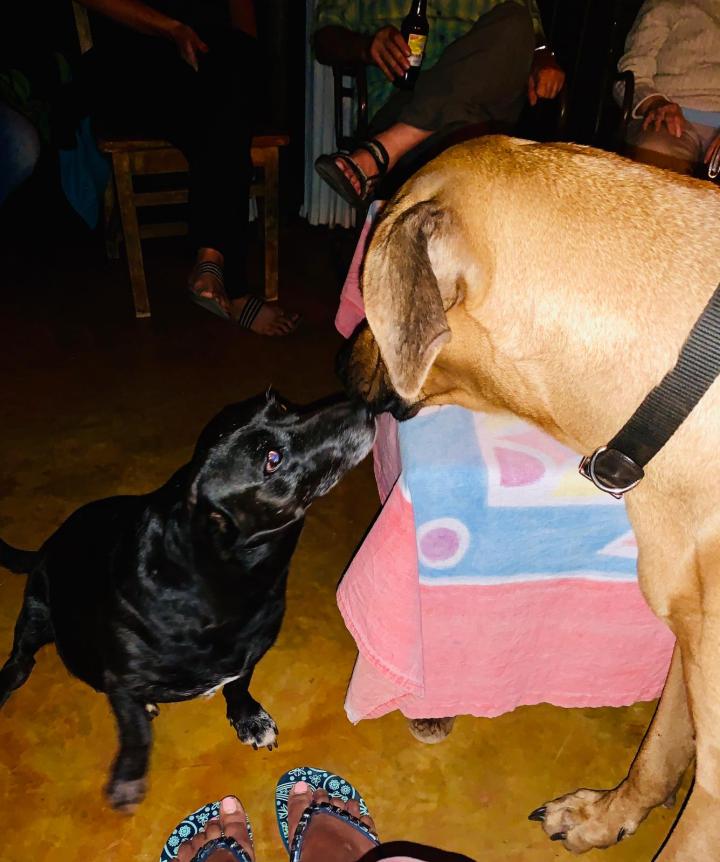 Nicky, their little sheepdog/dachshund mix (yes, her body habitus is quite bizarre) was out on the deck with everyone, along with Elvis, their Sekoke cat (a rare mix of domesticated and wild African cat from Kenya), who pretty much buddied up to Kyra, our cat lover, but in the end settled on Andrea’s lap for the longest of time. Oscar, their three-year old Rhodesian Ridgeback, was let out a little bit later so as not to knock every glass off the table and managed to make friends with everyone, but Mike turned out to be his real buddy as the two shared one large chair and appeared quite the couple. Frank typically disappears at 8 PM, his usual bedtime, but actually lasted until 8:30 tonight and in his usual custom, vanished for his bedtime without a good night so as not to break up the party. It’s always an incredibly relaxing evening where everyone can share whatever stories they like. Joyce Cuff and her sister Terry were also there, so it was fun sharing our old stories of the big mobile clinic to Lake Eyasi with everyone else. We also had a new volunteer, Greg, an internal medicine doc, there so he was also able to hear some of our old stories about FAME from ten years ago. It was a wonderful night and I think everyone walked home with a better appreciation of what FAME had been and has now become over the years.