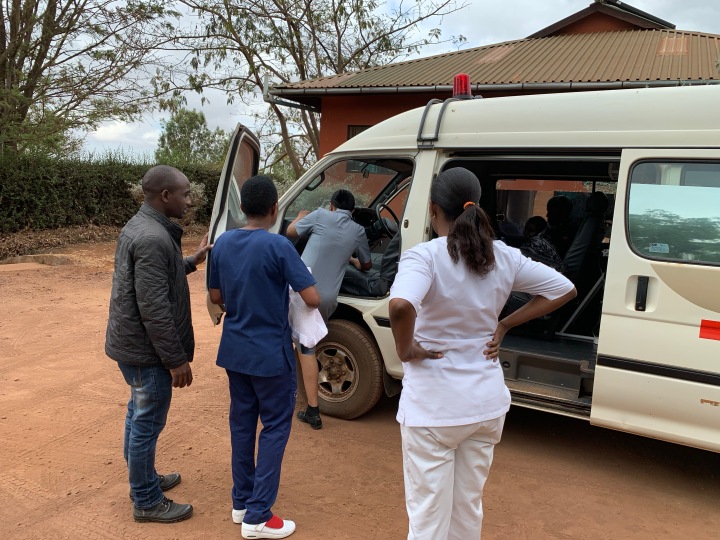 Sending a young child off to Arusha in FAME’s ambulance

We awoke today with the anticipation of our upcoming journey to the Serengeti after lunchtime and were thankful that we had made it home last night with Turtle, as had we had to leave her on the road in Mbulumbulu last night it would have thrown a major wrench into our plans for the day. We had a borrowed alternator and were awaiting a new one to arrive from Arusha, but we were fine to travel to the Serengeti while awaiting the replacement which would most likely not arrive on time for our departure. Regardless, Turtle seemed to be in a much better mood this morning and turned right over for us with a full charge on the battery given the long ride home last night to top it up.

Dr. Shaban and Hannah evaluating a patient together 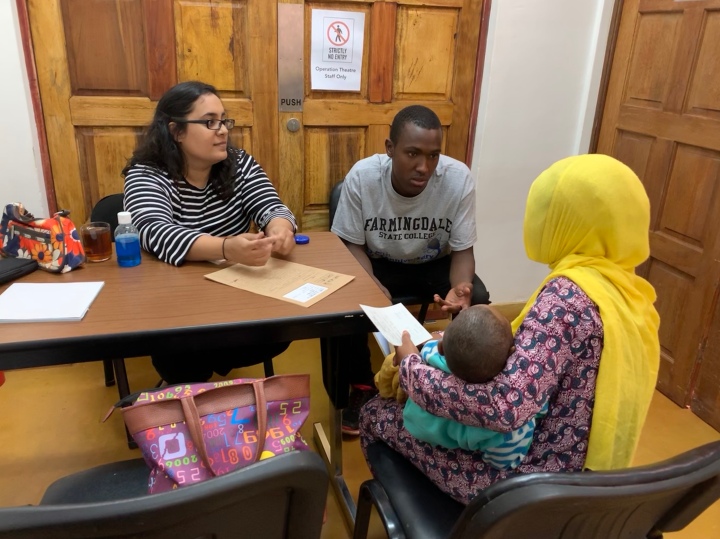 Amisha and Emanuel evaluating a patient

We were planning to work in clinic until around noon today at which time we would leave for our two-night adventure to the Serengeti. Our guide, Leonard’s younger brother, Fred, was coming up this morning to pick up Turtle and give her a good going over before we left to make certain that she was worthy of the adventure we were planning. We went to morning report and learning of a patient with Tb who had been admitted overnight and was reportedly encephalopathic. He would definitely require a lumbar puncture, but we first wanted to evaluate him with a thorough examination as we were unable to obtain any imaging first since our CT scanner was still down. When Lindsay went to evaluate the patient, though, he had a fairly focal examination with some mild left-sided weakness that presented a bit of an issue as we are always taught to obtain an imaging study in this situation to decrease the risk of herniation during the LP. In reality, the patient was awake and despite his examination, we felt very comfortable performing an LP to rule out Tb meningitis which would certainly affect the treatment recommendations.

Amisha and Emanuel evaluating a patient 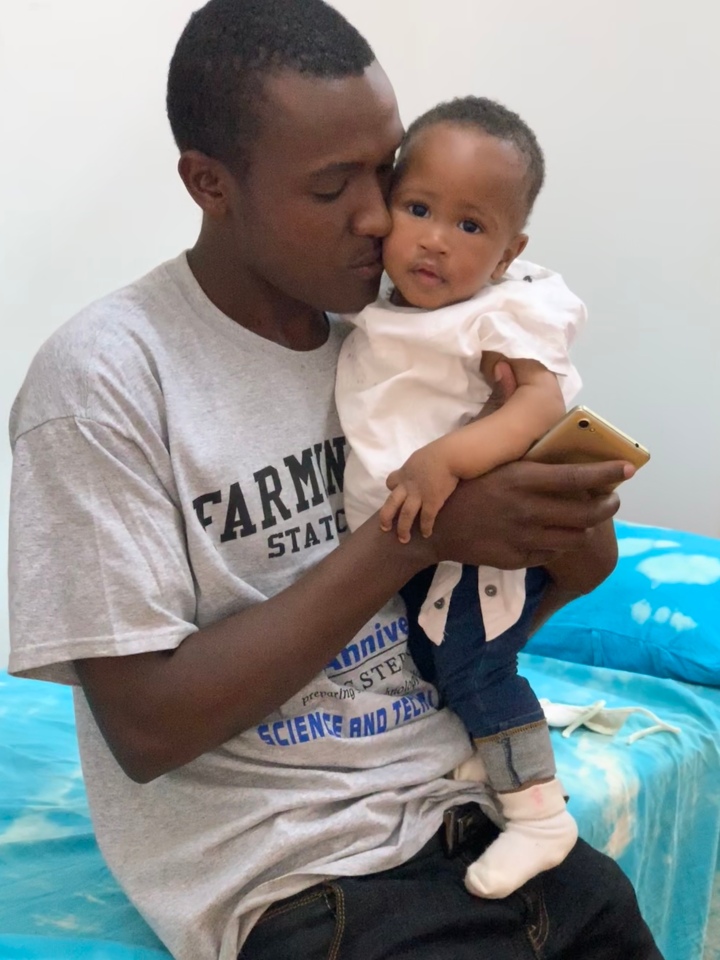 Emanuel enjoying one of Amisha’s patients

The patient eventually underwent the lumbar puncture that failed to reveal a significant meningitis so we were then left with the concern of what was causing his examination focality and this would require being sent somewhere for an imaging study. We had also placed the patient on anticonvulsant medications as there was some concern that his mental status could be the result of recurrent seizures and after being placed on medications, there was some sense that he may have improved slightly, so it was recommended that he remain on the medications while his family decided if they could afford traveling to Arusha to get the CT scan of his brain to look for a possible mass lesion. This entire process, of course, took place throughout the weekend while we were traveling and so we weighed in on things upon our return from the Serengeti. In the end, we had to accept the fact that they would go home on AED’s and with a focal examination until the family could raise the funds to obtain a CT scan of the head with hour hope that he wouldn’t deteriorate in the meantime

Dr. Shaban and Hannah evaluating a patient together 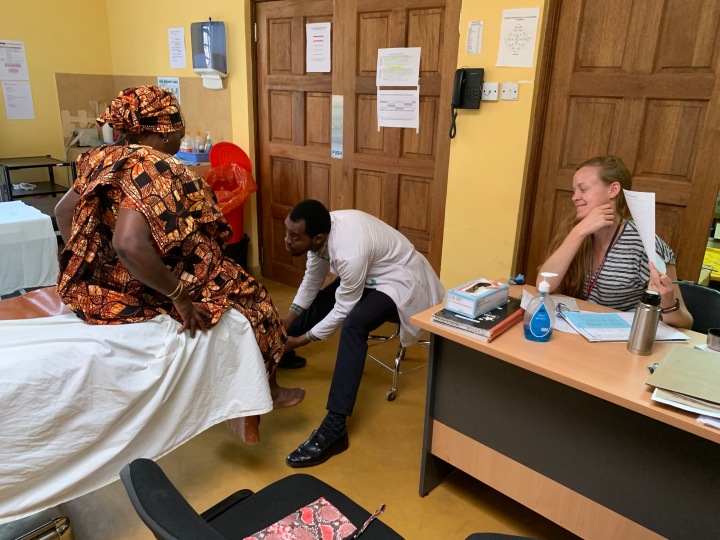 Hannah decided to donate blood this morning as there is always a need here and her blood was in need be more universally acceptable for infusions. It wasn’t a long process, but she clearly felt the effects so we put her on light duty for the morning or at least a significant part of it. My blood type wasn’t in as much need and I wasn’t considering giving it either way this morning as I did want to feel drained on our trip to the Serengeti. Given Hannah is half my age, I figured that she’d have a much better chance at bouncing back than I would. With their surgical load here, FAME is now able to keep blood here for those cases and can trade blood supplies with other facilities.

Kitashu and Lindsay evaluating a patient

Hannah enjoying one of her patients

We had planned to be finished by around noon time so we could have some sandwiches at the house prior to our departure, but, of course, plans never quite work our as anticipated. What I had hoped would be a well abbreviated clinic since it wasn’t announced turned out to be a little heavier than expected and we ended up seeing nineteen patients or so, about 2/3 of our normal full day volume. Thankfully, we were able to wrap everything up by around 12:30 pm and soon enough we were back at the house eating peanut butter and jelly (or some variation thereof) sandwiches with everyone quite excited for our departure. Fred had taken care of a few things on Turtle (the back door had decided not to want to latch just this morning) including filling up on 70-liter fuel tank that would have to last us several days. We loaded our small bags into the back and covered everything up as it would be a very dusty and long drive today heading up to the Crater rim, around it and then down past Olduvai (actually spelled incorrectly and should be Oldupai with a “p”) Gorge and through the Ngorongoro Conservation Area to Naabi Hill, or the entrance to Serengeti National Park. 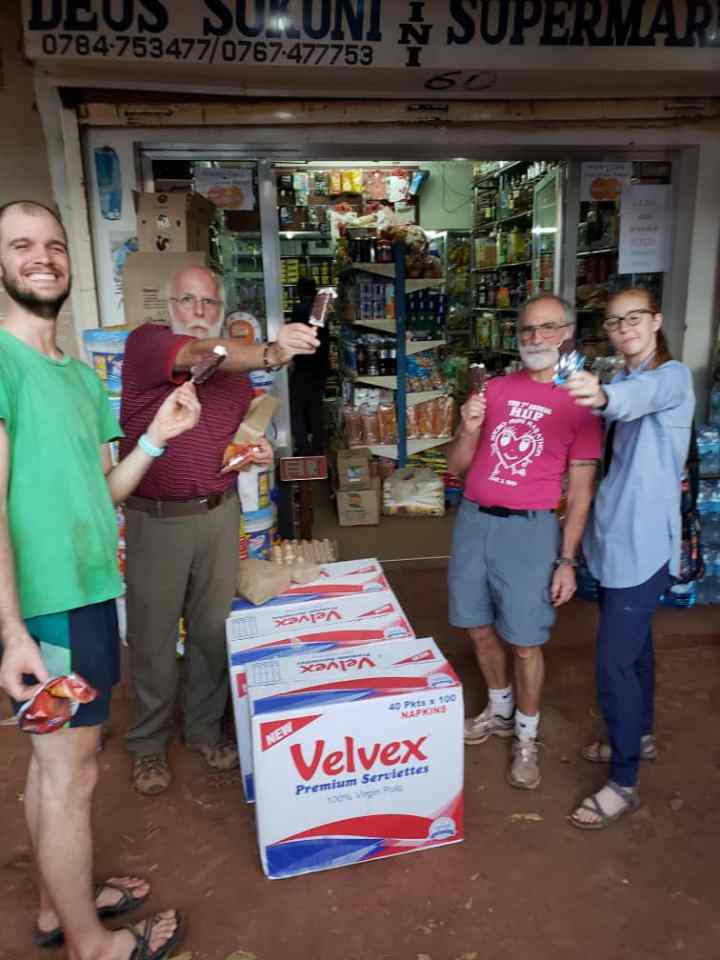 Ice cream at Deus Market on another day

In Karatu at the market with a friend

After grabbing two cases of water for our trip (remember, this was really more of a guided self-drive that we arranged rather than a safari booked with a company), along with some ice cream bars (have to grab them when you can and I’m so happy to have discovered that Steve is as much an ice cream fanatic as I am), we began the drive to the gate for the Conservation Area. The tarmac ends here and it really is like you are entering another world when you drive through and begin going up and up towards the crater rim through the primordial forest that occupies this region. There are steep, steep canyons and ravines that are constantly to your left going up and the trees from the very bottom stretch nearly all the way in to the top in their attempt to reach the sky. Quite often there are animals on the road as you travel, mostly Cape buffalo and elephant, but occasionally you can see more as we did one morning, spotting a leopard jumping right in front of us onto the road. 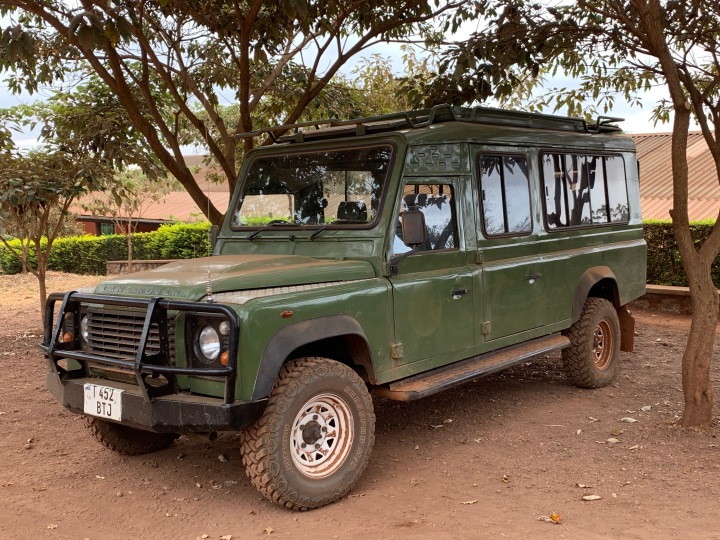 Turtle, during a moment of rest at FAME 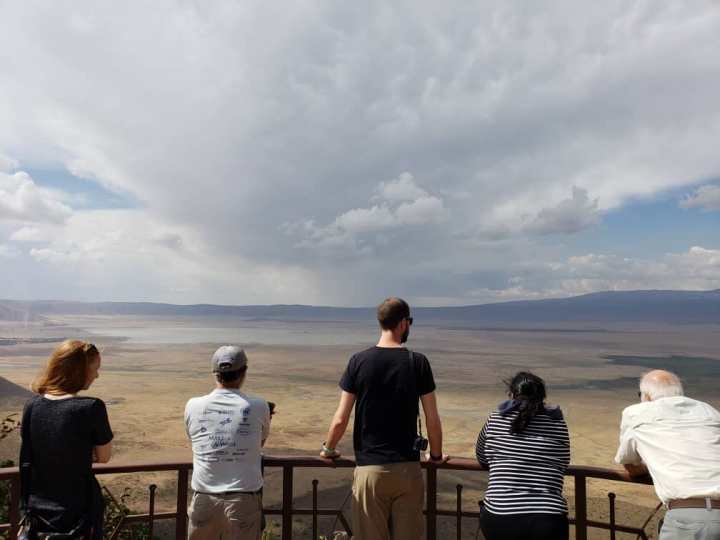 Unfortunately, our transit through the gate was a bit delayed due to a small hiccup in our “quotation,” or reservation, that must now be filed online and in advance. After an hour or so, though, we were finally on our way up and over the crater and down into the conservation area that is really a continuation of the Eastern Serengeti. Passing beautiful valleys full of Maasai boma (a boma is a small grouping of huts surrounded by a brush fence to contain livestock where a Maasai family lives, meaning a husband and typically multiple wives, each wife having her own hut for herself and her children) with livestock everywhere being grazed most often by young children tending the large herds that often share the same pasture with zebra and wildebeest. In the open plain you also see Thomson gazelle, the fastest of all the antelope, and Grant’s gazelle, slightly larger than their cousins. We traveled past the Serengeti boundary marked by a large sign and continued on to Naabi Hill, where the entrance station is situated. We had a much better time here, thankfully, and, in fact, they knew who we were as our friend had stopped by earlier to confirm our paperwork was in order, and we proceeded on to the Central Serengeti and our camp.

It was getting towards dusk and the skies were a bit cloudy, making for an incredible sunset thunder clouds in the distance and streaks of lightening. It made for an amazing backdrop to our drive as we sped along the washboard road deeper and deeper into the Serengeti. At one point, there were two vehicles stopped ahead looking at something perched high on a distant kopje, one of the rock outcroppings that distinguish the Central Serengeti. It was clearly a cat and it was far in the distance so it was initially difficult to see what it was, but finally the binoculars were broken out (my cameras were still packed as the light was far too dim to shoot anything) and much to everyone’s surprise, it was a leopard, typically the most difficult of the three more common large cats here to spot. It was a lucky spot and, of course, we would have to see more of them in the daylight to be fully satisfied. 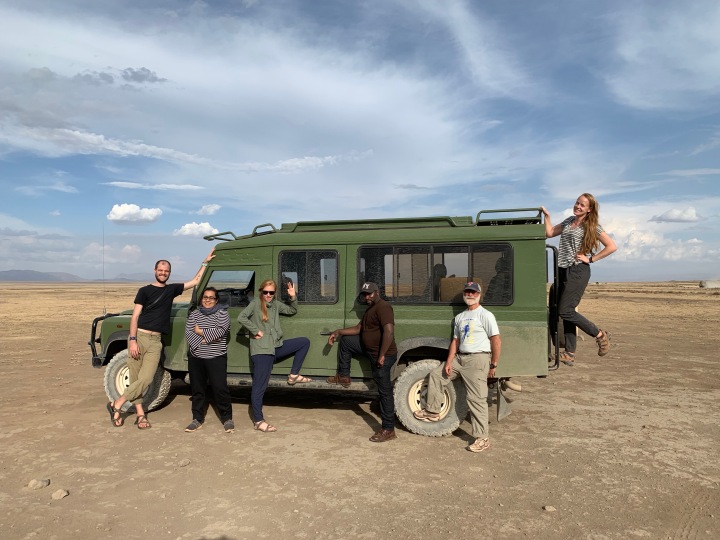 John, Amisha, Lindsay, Fred, Steve and Hannah (in her favorite spot) at the Serengeti boundary 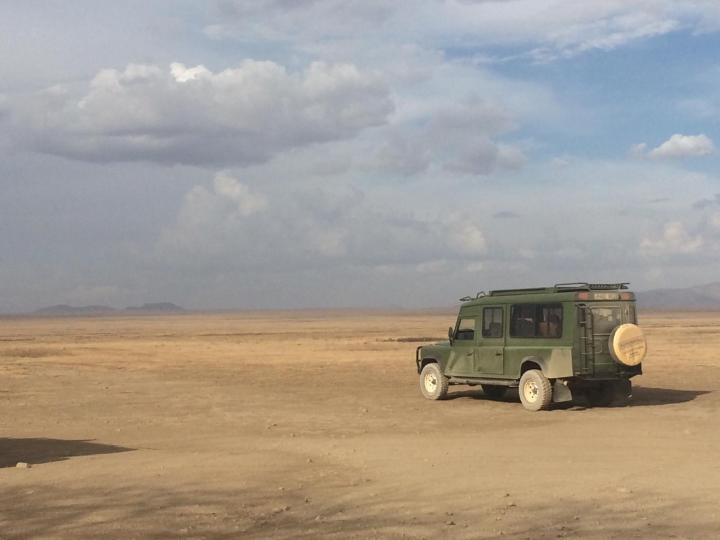 Turtle on the Serengeti

We continued on to Seronera, the name of the central area where the airport, visitors center and any businesses are located, with our camp still a half hour drive in the distance. There are no night game drives allowed here, but since we were in transit to our camp we were fine, yet we were able to experience some of what the night is like here with large herds of zebra traveling in a thin line often crossing the road, or just sitting in it until we were almost upon them. Lots of antelope could be spotted, though now in the woodlands it was impala, hartebeest, eland, and, of course, the numerous wildebeest. 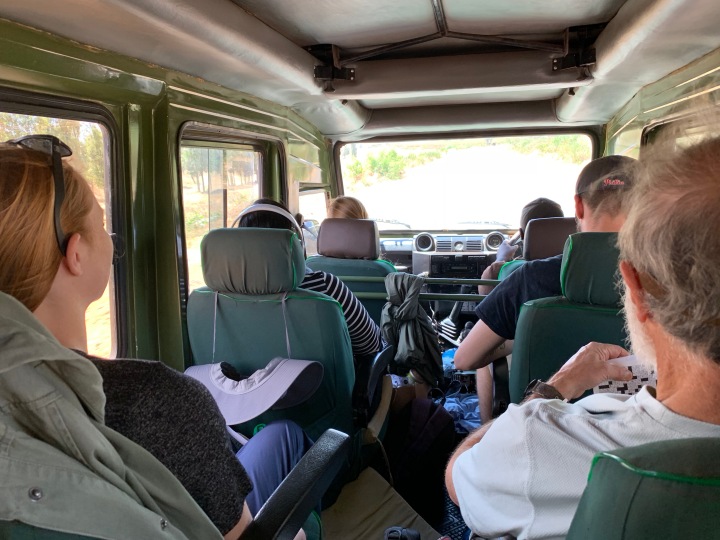 We made it to camp where we were greeted with fresh juice and cool washcloths, given a short introduction to the camp rules (never walk from your tent unattended at night for there were clearly lions and hyena nearby), after which we were all shown to our tents to freshen up before dinner. Meals are a fabulous affair with food that is served to us in bowls that we scoop for ourselves and many of them. The soups here are to die for and I have eaten every imaginable combination of soup in my years visiting camps and lodges. It was off to sleep after our lovely dinner, in tents that were incredibly spacious (we were staying at the Thorn Tree camp if anyone wants to look them up) and luxurious. Tomorrow morning, we would be off for our first game drive.

Hannah in her own room in the tent