Today was to be our last mobile clinic of this visit and we would be spending it at the Rift Valley Children’s Village near the village of Oldeani. Our visit to RVCV is always one of the highlights of this trip for the residents, and specifically for the pediatric neurology fellow, as it is an amazing place that was created by Mama India (India Howell) several years ago after she had been here working and fell in love with the country deciding to spend the rest of her life here. More importantly, though, she decided to create a safe home, and the emphasis is on home, for children that have either been orphaned or unable to be cared for by their families such that they have now become her children and not up for adoption as that would mean this wasn’t truly their home. Children here are cared for by house “mamas” and the children are organized by age and sex once they reach childhood. Children live here until they are ready to go away to school and when it is time for them to go to college, they no longer live in the Children’s village, but often come back on holidays to help with the work.

Susan in her comfort zone and Johannes not so sure

Children here attend a primary school that is right next door to the village and it was quickly realized that for her children to have a decent education and to remain healthy, she would have to come up with a plan that eventually involved helping to support the school financially with more teachers and to improve the facility. This not only benefited the children at RVCV, but also all of the local children attending the school so that eventually, the academic performance of all the children improved dramatically which was borne out by their testing scores and their ability to move on to secondary school, as this is a huge hurdle here in Tanzania. Children are required to go to primary school which is up through standard seven, or seventh grade, and then they must pass a national exam to determine whether they are eligible to go on to secondary school, form one through four, or not.

Mama India and RVCV are also one of the primary reasons that FAME is where it is today. The town of Karatu and its close proximity to RVCV was a huge factor as they would be able to provide medical care to the children’s village and their neighbors, the village of Oldeani, while FAME could also begin to provide the basic medical needs to the large Karatu community that also included the Maasai in the Ngorongoro Conservation Area. FAME has continued to provide care to these communities for the last ten years and the numbers continue to increase on an annual basis.

A visiting nurse practitioner providing care to one of the children. We’ve taken her exam room 😉

One of my favorite bumper stickers 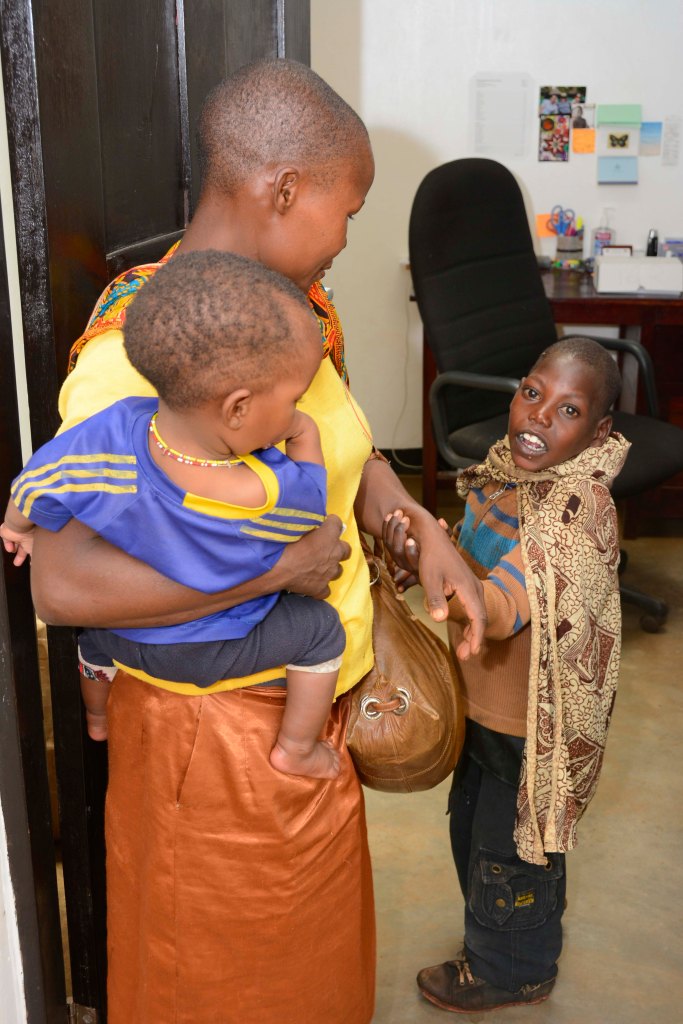 One of my long-time patients from the village

The drive to Rift Valley Children’s Village is one of the most scenic routes as you drive along the tarmac towards the Ngorongoro gate and then turn off to the west just before entering the NCA. The dirt road can be very rough at times and, in the rain, can become extremely treacherous just like any of the dirt roads here. You drive along a ridge top and then down into several ravines, before ascending again to a large coffee plantation that surrounds the village and is a main source of employment for the community here, The small village immediately adjacent to the children’s village is extremely poor and there are no permanent buildings, though there is one satellite dish that sticks out like an oddity as we drive by towards the entrance gate to RVCV. Once inside the gate, there is an immediate sense of security in terms of this being a home and the children are central to everyone’s attention here. We’re immediately greeted by the nurse for the children’s village, a full-time occupation as she not only cares for the children here, but also for the children of the nearby community. We already have patients waiting for us, a mix of children and adults, some of whom we have seen before, and others who are new to us. 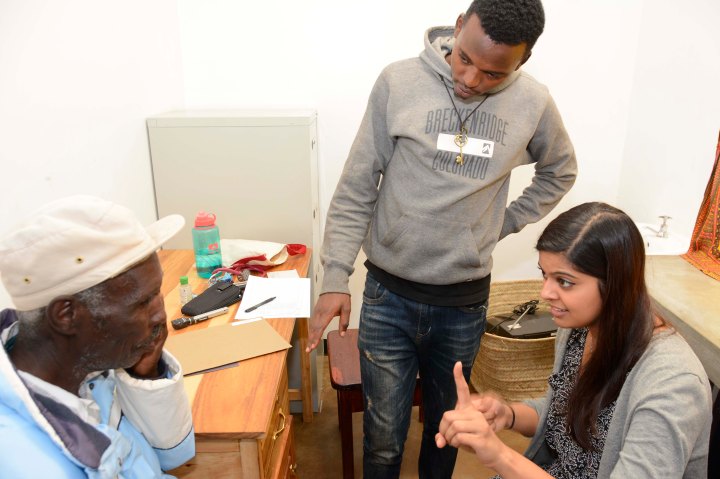 Mindy and Baraka evaluating a patient

FAME used to provide a general medicine clinic here every other week, but for various reasons, patients are now transported to the main campus to receive care, though we have continued to have our neurology mobile clinic here as it has made sense for our mission and is typically a very productive visit that everyone looks forward to. There were plenty of children here to keep Susan happy, while we also had a number of adults whom the others could see. The facilities are wonderful for us and we were able to run three exam rooms so patient flow was extremely effective for us. 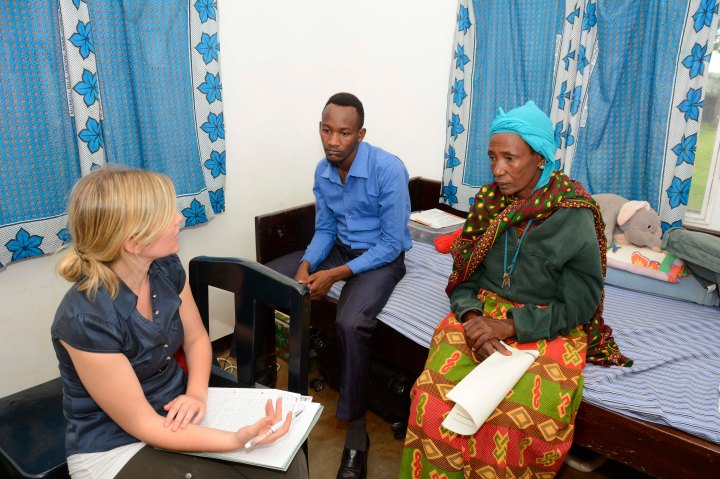 Susanna and Emmanuel obtaining a history

One child who returned was a young boy who Susan had seen last week at FAME and had been documented to have had an absence seizure during the visit that was provoked with hyperventilation. This is a brief staring spell during which you can see eye fluttering and the patient is unresponsive for several seconds and then just will snap out of it. This is typically a sign of a primary generalized seizure disorder, though could also be merely childhood absence that is a less severe form. His episodes, which had not previously been recognized as seizures, were now interfering with his schoolwork so that he was placed on valproic acid to hopefully prevent further episodes. It would have to be titrated up and the day we were here was the day he was supposed to have increased the medication. His family reported fewer episodes, though we were able to provoke one again with hyperventilation. We recommended increasing the valproic acid as we had planned and seeing how he was going to go on the higher dose of medicine. Treatment for this condition will make a huge impact on this boy’s education and life and, had this not been recognized and treated, he would have gone on continuing to have these brief lapses in consciousness and probably falling further and further behind in school.

Susanna and Emmanuel evaluating a patient 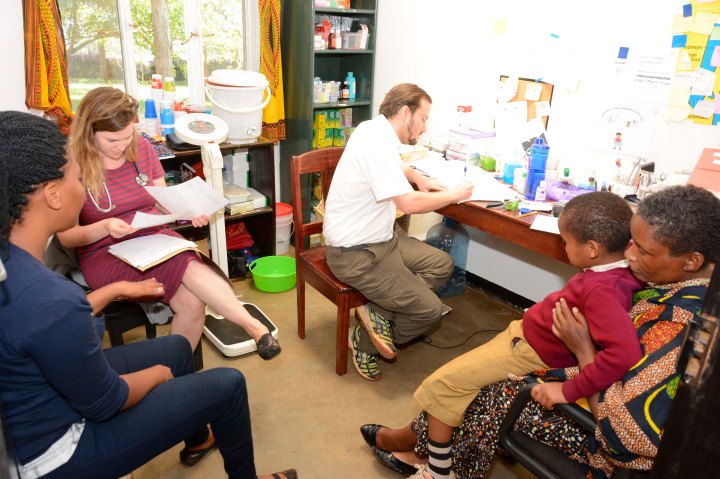 Susan and Johannes evaluating a child

Though there are always obstacles, seeing how the children at RVCV are cared for medically by their nurse and also seeing the benefit to the local community is always something that gives hope to the future of at least this small part of the larger community. With continued awareness and involvement by organizations such as RVCV and FAME, the lives of a growing portion of the population can be made better with the hope that those individuals who have benefited will go on to create new programs for social equity and justice. Ultimately, this must all be something that is self sustainable, at least in the sense that it will eventually be all Tanzanian and the requirement of our participation will become less and less over time. It is quite clear that we are in the early stages of this process in regard to the neurologic aspect, though we have continued to make steady progress and perhaps with plans to train some of the doctors here to provide the neurological care that is so necessary, they will eventually be able to do so with gradually less and less help from us. Over time, the need for our involvement will become less and less, and that is our ultimate goal.