Monday, February 29, our first full day in Tanzania began with a very late morning for most as everyone was exhausted from our day plus travel over the weekend and our late arrival to the Tembas. Having a day to relax and catch up is crucial as we have plenty of work ahead of us and have to rebuild our strength. Having gotten up early I went to the fruit market with Leonard and Pendo to buy supplies for our breakfast – the tastiest of mangoes, pineapple, watermelon and the small, sweet bananas that grow on the slopes of Kilimanjaro. Life is good. A breakfast of fruit, pancakes with Maasai honey from Oldupai Gorge that must have some magical powers, or at the very least it sure tasted like it did. And the African tea that I dream of before I return each visit and Danielle loves so much – ginger and cardamom and everything else good in this world. Simply said, it’s to die for in my humble opinion.

I had some errands to run with Pendo – the immigration office and the Airtel store – after lunch while Jackie and Nick took a walk in the neighborhood and Jess slept trying to fight off a cold she picked up flying here. I was happy later to see that our walkers had found their way home as I realized it could have been an issue considering they really had no idea of where anything was and didn’t have a phone to call if they had run into a problem. At least the Airtel store was a success for my SIM cards as the immigration office was a bust to have my resident permit endorsed into my passport as I did not have the original permit with me. Oh, another visit on another day…or not.

After a wonderful lunch with Pendo, we took our obligatory trip to the Maasai Market, an institution in Arusha and where there is shopping and deals galore. There are easily over 100 stalls, each carrying pretty much the same merchandise with only subtle variations. The prices, of course, are all variable and negotiable. It would be considered rude to pay the first price quoted and so it is very important to know what you want to pay before you begin to bargain. It is part of the culture here. We did well to find some things we were interested in, all very traditional and unique to Tanzania, and will return home with these treasures in our emptied duffels that currently contain all the medical supplies being brought to FAME. 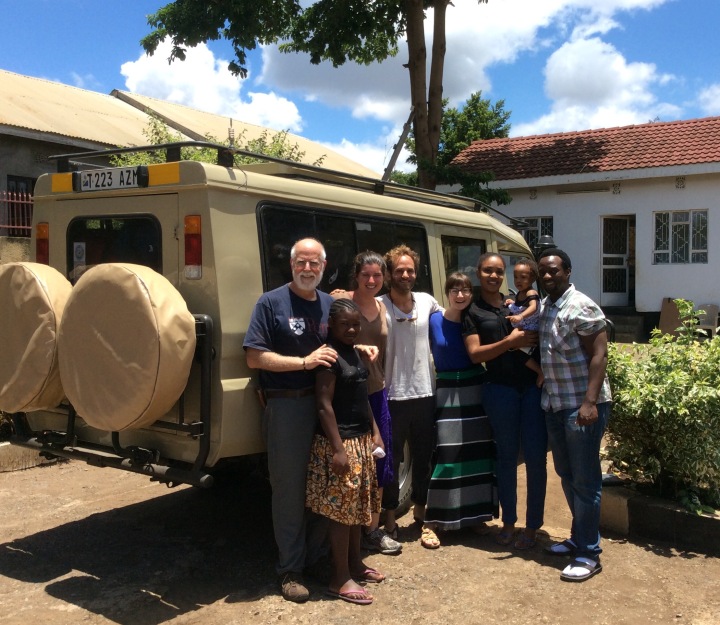 Me, Naema, Jackie, Nick, Jess, Pendo, Gabriella and Leonard before our departure to Karatu

Tuesday, March 1, was our day to depart Arusha and travel to Karatu and FAME. I had hoped to leave very early, mainly to get there by lunchtime so we could relax and move in the afternoon ready to work the following day. Leonard’s Land Cruiser, our means of transportation while here in-country, had been in the process of being repaired over the last year and was so close to being ready, but still needed a few last things to bring it up to snuff for our use. I drove off with Leonard at around 8:30am to work on the vehicle – it needed new shocks for the rear, an alignment, a few tires changed, and some electrical work. What was supposed to have taken and hour or so ended up being close to three hours and delayed our departure until well after noontime. When I returned home to the others to let them know I was back, I summed up the situation by merely saying “Africa Time.” This is a universally understood and recognized term that is used here to refer to the fact that things get done when they get done and the world still continues to revolve around the very same axis it did before. No catastrophe, no harm, no foul. It’s just the way it is here and has always been. Time moves at a different pace and we are not the center of the universe. It has been that way since the dawn of the world which is quite evident as we travel through the Great RIft Valley and the birthplace of humanity. Yet we are but a small and often insignificant part of this great creation.