I had made the last trip in the fall on my own as there had been a near complete ban on any University travel save that which was deemed essential. Though I had been allowed to travel, the residents were unfortunately still banned as the pandemic continued to rage throughout our country, and the world, with many more months of a rising death toll before there was finally some hope in sight. Thankfully, with the vaccine becoming available in January to those of us in healthcare, meant that there would be a much greater degree of safety, such that the powers that be were willing to allow my residents to travel given the safety that this amazing breakthrough would provide. Still, given the new strains of the virus turning up throughout the world, the trip wasn’t completely without risk and we would all continue to practice the very same precautions we had at home. A strict ban on medical student travel did remain, though, and we would be once again traveling without them, as we had done for a number of years until more recently a single medical student would travel with us to provide support for our database in addition to having an observational role with the team.

After a number of formalities were completed with various University offices, both at Penn and at CHOP, to ensure our full compliance with their training programs, the time had come for us to depart Philadelphia and make our way to Kilimanjaro International Airport and then to FAME for our spring 2021 neurology clinic. Flights had been purchased, our trip had been registered with Penn which would provide us with full health coverage abroad along with evacuation insurance home should it be needed by any of us, our business visas had been purchased, and, finally, in-country evacuation insurance for each of us should something happen in the bush. Thankfully, this was all old hat for me given the number of times I’ve traveled to FAME, both on my own as well as with a full complement of residents, and most of this was routine for me. I had met with the residents on several occasions to go over things, such as their passports being good for at least six months after our travel and bringing American dollars printed only after 2006, and their fellow residents had also met with them to share information on what to bring with them, something much easier for their colleagues to do than for me.

The time had finally come for us to depart and, as was usually the case, I would be leaving several days in advance of the rest of the team to prepare things for their arrival. Turtle, my trusty stretch safari Land Rover, that has taken us there and back on so many adventures, would certainly need a looking over, though Leonard and Pendo had made certain that whatever needed repair had been taken care of after my last trip. Turtle, as many of you know, has managed to show her age on several occasions, though, in the end, has eventually come through to bring us home, often with the help of a few spare parts or a jump start. I would be leaving on Saturday, March 6, along with my traveling companion, Margo, on our journey via Chicago and then on to Doha, Qatar, and finally, Kilimanjaro. Booking my flight, I had thought long and hard about flying through Chicago in the winter, given its propensity for horrible snow storms and interrupted travel, but the forecast was for unseasonably good weather for the weekend, so I knew that we had little to worry about on that front. Oh yes, I failed to mention that the Delta/KLM flights which we had originally purchased had been abruptly cancelled two weeks prior to our travels necessitating us to purchase the Qatar flights quite late in the game.

It had been smooth sailing checking in at Philadelphia International Airport despite several overweight duffels including my carry-on baggage, so much so that I should have been overly suspicious that there was something lurking that might throw us off course. In Chicago, while traveling between terminals, I received a phone call asking us to go to the Qatar Airways ticket counter to get new boarding passes, which seemed innocent enough, but in the end, it proved to be the unravelling of a perfectly planned trip that would have allowed us a few days to relax at one of the country lodges outside of Arusha prior to the residents arriving. While issuing us our new boarding passes, the Qatar agent carefully looked through my passport and, in a very matter of fact manner, simply announced that I could not fly before moving on to Margo’s passport and then asking her whether she was still planning to travel without me. After several minutes of discussion, during which I was told that my passport did not have a completely blank page remaining on which the word visa was written at the top and that I would have to get a new passport before I could travel, it became readily apparent that this was going to be a problem of rather epic proportions and not one that was going to be easily remedied.

Lesson one in passport etiquette: This is NOT an empty visa page

I spent the next hour pleading with the station manager for Qatar Airways in Chicago, who, in a very polite yet firm manner, proceeded to explain that there was no way that I could travel to Tanzania with my passport as it existed given the current regulations from immigration in Tanzania. The regulation related to the fact that the visas used to be pasted into your passport and took up a full page, but they haven’t done that in a number of years since going to online visa applications, and they are now merely stamped in your passport and are the size of any other passport stamp, no longer requiring the full page. Despite my explaining this interesting piece of history that was clearly not appreciated, it was made clear that I could not board the plane and, in very short order, our duffels were taken off of the plane, stranding us at O’Hare International Airport on a Saturday night in need of a new passport, knowing that no one would be open on Sunday, and that many offices were only partially functional during the pandemic.

Lesson two in passport etiquette: this is a visa page with enough room to place a visa stamp

Exhausted from my hour plus of pleading our case, not to mention the fact that we were both starving having had a slice of pizza each back in Philly before our flight, we made our way to the O’Hare Hilton to look for a room and figure out what the hell we were going to do stranded in Chicago, knowing that the residents would be leaving shortly and very much in need of someone to supervise them. If I were unable to figure something out and in rather short order, it could jeopardize the entire trip. Even before we had left the terminal, I had already begun to make calls to Tanzania to see if we could figure something out, even though it was the middle of the night in East Africa. It became immediately clear to us, though, that nothing of any substance was going to occur that night given the time differences, so we settled into our 10th floor hotel room at O’Hare International and ordered some dinner to our room shortly before they were closing the kitchen for the night. To say that we both had just a bit of concern over the future of our travels as we settled into slumber that night would be putting it mildly and it was readily apparent that we would spending the next day figuring out just how we were going to rectify this seemingly hopeless situation. 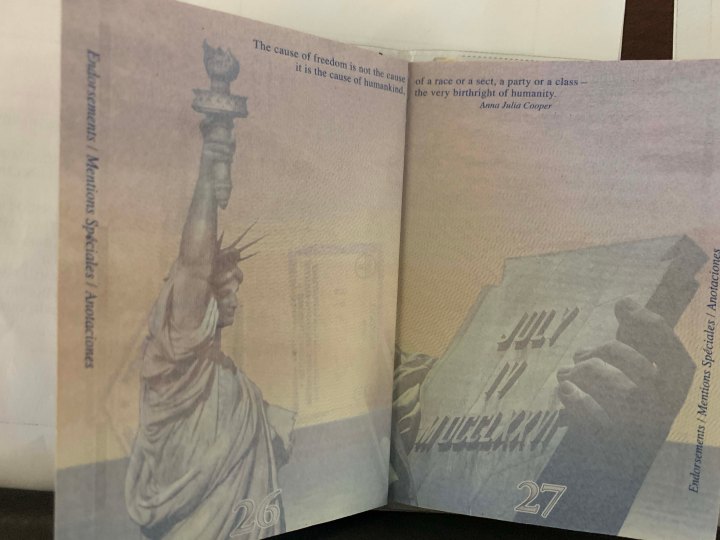 And finally, lesson three in passport etiquette: These are NOT visa pages!

To add insult to injury, Qatar Airways was requiring that all travelers have a negative COVID PCR test within 72 hours of starting their travel and, despite the fact that we had taken care of this for our trip in its original configuration, we also realized that regardless of what happened, we would have to get new PCR tests done in time for us to fly even if we could figure out the passport issue. There were now so many moving parts that it became difficult to keep track of just where things stood with any of them, but somehow over that Sunday, we were able to put things in motion that would resolve all of the issues as long as everything fell into place as we had planned. We both got our new COVID tests, that had to be done on an expedited basis due to the incredibly tight timing and, which cost an arm and a leg, had our travel agent rebook all of our remaining flights, which, by the way, included a “no show” charge from the airline even though we had actually showed but were not allowed to fly, and simply waited for the stars to align. Though we had missed our two days of R&R, if we could make the Monday evening flight, two days later than originally planned, we could hook up with the residents in Doha for the final leg of our journey to Kilimanjaro and salvage the trip.

Spending two days at O’Hare had very little in the way of silver linings, but we were introduced to Giordano’s deep dish pizza and chopped salad, which we had delivered to the hotel on Sunday night. If you’ve never tasted these amazing dishes, I would highly recommend them as they were a definite redeeming benefit of an otherwise incredibly stressful two days stranded in Chicago. Monday morning came as we waited for our COVID tests to return, which they eventually did and were negative, and we were finally allowed to board our flight to Doha, looking forward to hopefully somewhat more uneventful travels in the future while promising to do my best to make up for our lost days of relaxation one way or another.