When planning my trip several months ago, knowing that I would have total freedom as I would be alone for the month, I had thought that visiting the Serengeti in the midst of the pandemic, when there would be very few, if any, visitors there would be a great idea. Now, having spent several weeks at FAME on my own, I’ve come to realize the tremendous value of just having a day or two to myself and having blocks of downtime to both do busy work and relax. I’ve also realized that I haven’t spent enough time in my hammock reading, a crucial error on my part and some very serious poor planning. Not that it was planned this way, but the poles in the back of the house are the absolute perfect distance apart for hammocks, of which I have three at the house as it became impossible for me to reserve a spot when the residents are here. Here alone, I’ve set up one that I have all to myself now, but have had little opportunity to get in it until this morning. In the afternoons, unfortunately, the sun beams directly down on the back of the house making it unsuitable for hammock time, but the mornings are absolutely perfect for reading in the hammock as it is at sunset. That is, until the mosquitos decide to descent upon us and chase us indoors for the evening. 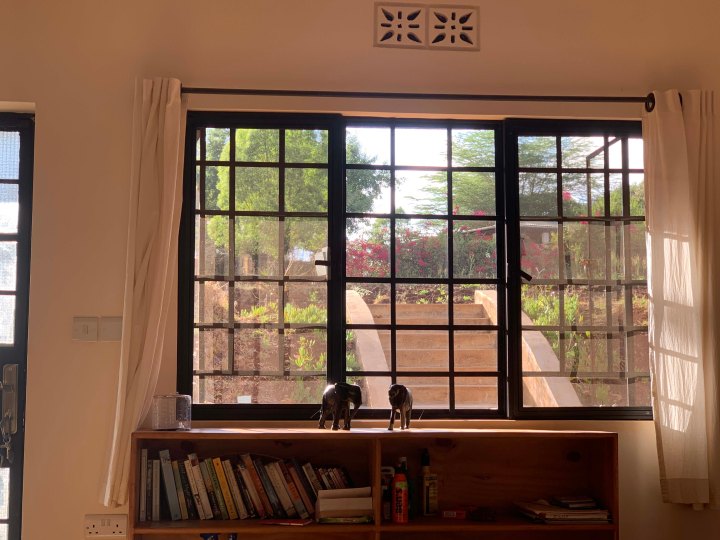 Beautiful weather out one window….

My plans for the two days was to finish a bunch of work that I had left over from Penn and also to get to my patient messages that were sitting in my inbox and needed me to attend to them. I also had some outside writing to do and was planning to get that done, as well. Both of those had to wait a bit for me to spend a few minutes, or maybe more than a few, in the hammock reading my book and just plain relaxing. I literally did not have any plans for the day that required me to leave the house, though that changed in short order when Nish invited me to come to the gallery for lunch as his cook was going to make us twice-baked potatoes, an opportunity that I did not wish to miss. After my hammock time and some work, I made the short journey down to the gallery and had a relaxing lunch with Nish. The potatoes were definitely worth the trip and very much lived up to their billing, so much so that Nish gave me the extra ones to bring home with me and have for dinner. Certainly not traditional Tanzanian culinary fare, but comfort food just the same.

And a dark sky out the other

I worked late into the evening, having my gifted dinner along with the some of the dinner that had been prepared for me by Samwell, a vegetable stew that went along great with the potatoes and I saved the chapati for the following day to make quesadillas, another non-traditional food item here, but one that is easy to make and very tasty indeed. I had been productive day for me, but not overwhelming as had been able to get my necessary downtime in and wet to bed that night not only feeling quite rested, but also very satisfied with the work that I had been able to accomplish.

For Saturday, I had promised Daniel Tewa that we would visit a friend of his together as she had apparently been hospitalized back in April, but he had given me no further information on what her affliction had been. I completed some work in the morning and headed over to this home at 1pm as we had previously arranged so that Isabella, his eldest daughter (Daniel has 11 children of his own and one adopted) could drive us to Qaru. I knew the village well as we had done several mobile clinics there until a bit over one year ago when we had switched to Mang’ola on Lake Eyasi which had a much better attendance. Isabella had a small Suzuki four-wheel drive that was quite comfortable on the tarmac, but was clearly not made for the incredibly bumpy road that was to take us to Qaru that day. The roads here are like washboards, terribly rippled so that it feels as though your teeth are going to fall out after just a short while on them. I had always thought that it was due to the vehicle traffic on the road, but learned after googling that it was actually due to the effect of water running over the flat surface of the road and having a natural rippling effect that leaves the roads this way. The Suzuki was so light that at times it seemed to want the leave the roadway altogether as it shimmied sideways from the bouncing. 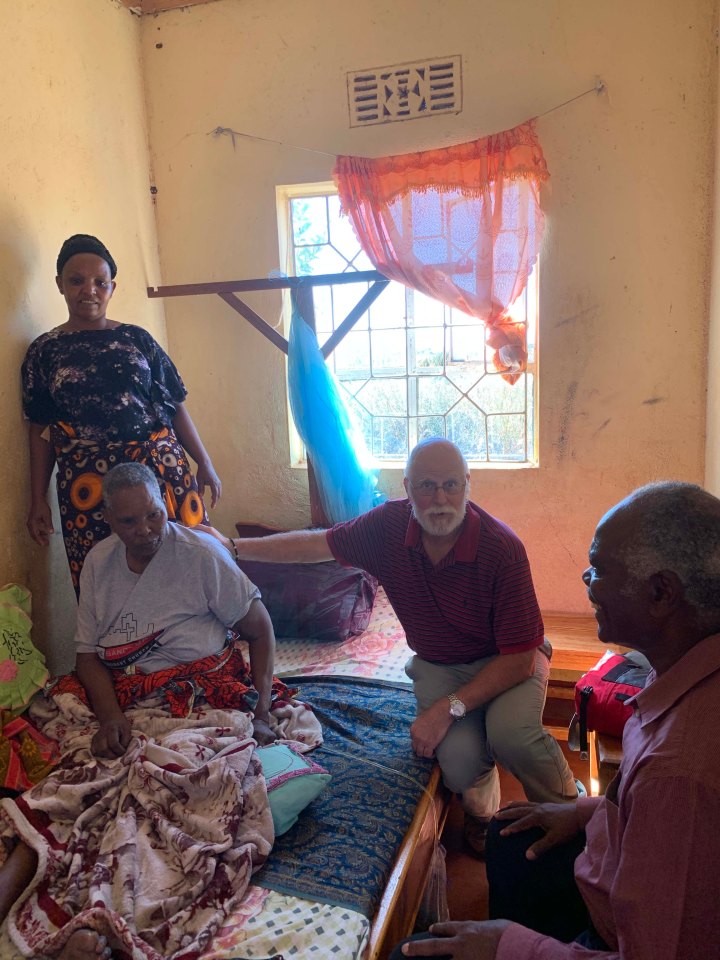 Explaining the concept of a homonymous hemianopia and neglect to the others.

We finally arrived to the village of Qaru and it turned out that his friend was staying with the nurse from the clinic who lived immediately next door to the dispensary where we had held our mobile clinics in the past. It was quite helpful that I knew my way around as I’m not sure that either Daniel or Isabella knew exactly where we were heading. We were greeted outside by the nurse who was caring for her and led into an inner courtyard and then into her room. As we entered and said hello to her lying in her bed, it was immediately clear to me that she had suffered a stroke as she was not moving her left side well at all and she didn’t seem to be looking very well to the left either. The fact that she had suffered the stroke was quite unfortunate enough, but to add insult to injury, her bed was positioned against the right side of the room such that she has been staring mostly at that wall for over four months and the full extent of her deficits, which included not only the left-sided field cut, but also some degree of neglect, had never been fully explained to everyone.

Daniel addressing his friend from the correct side after my explanation,.

I took the opportunity to explain not only to her caretakers, but also to Daniel, that if you wanted her to pay full attention when addressing her, you would need to do so from her right side. This can be difficult to explain to those fluent in English, so it took a bit of extra time to fully explain the nature of a homonymous hemianopia to them and the fact that it was actually both eyes that didn’t see to the left and not just her left eye. Once I explained this to Daniel, he immediately tested the hypothesis by speaking to her from the left then moving to her right and comparing her attention. She immediately perked up when addressed from her right and Daniel was convinced. I instructed them to move her bed to the other side of the room so that she would be able to participate much better with visitors and it would help her rehab. They were doing physical therapy, so that part of the equation had already been dealt with in a satisfactory manner. 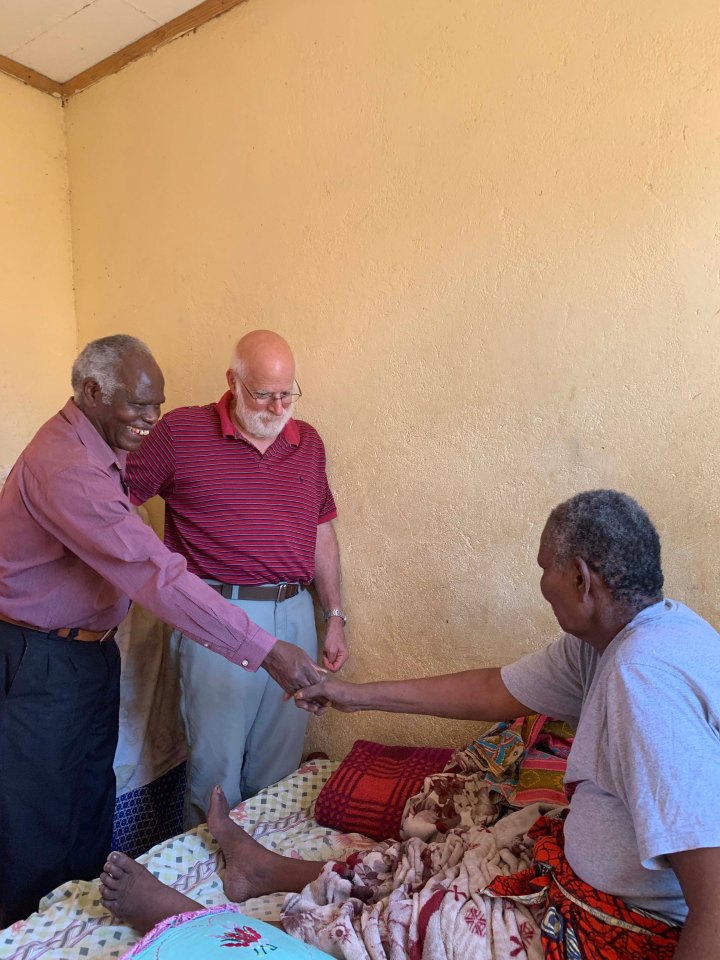 Greeting Daniel’s friend once I explained how to properly do it.

We all said our goodbyes after a brief, though thorough visit and loaded back into the Suzuki for our return trip. The road seemed to be definitively bumpier on the way back, but I’m certain that was only in my imagination or perhaps had to do with the fact that intense midday sun seemed to be continuously in our faces. I was texting Susan the drive home and, between the sun and the bumps, there were some very serious autocorrections that I did not catch until after they were sent and we both had a great laugh over it. Arriving back to Daniel’s home, and even though I needed to get back to do some work, it is always customary for he and I to sit in his small living room and share some of his amazing African coffee. No else in the family drinks and I think he looks forward to my visits so that he can enjoy it with someone. The coffee is boiled with fresh milk from his cows and with a little bit of sugar, is truly to die for if you consider yourself even a touch of a coffee lover. Though I have weaned myself from the addiction over the last several years, I do still love a good cup of coffee every once in a while, and it is occasions such as these that are the very best in which to savor that wonderful taste. The coffee of the Ngorongoro Highlands is some of the very best in the world and, having been prepared in Daniel’s home, it is a very special treat indeed.

I drove home, now well caffeinated, to sit down to some serious work at the kitchen table with my music playing. I did take a break to make some vegetable fried rice with a supply that I had taken during lunch a few days ago, making it with the sesame oil that had been found in town for me specifically for this occasion. Tomorrow, I would be taking some of the FAME gang on safari to Tarangire for the day and I planned to bring my leftovers from dinner with me for lunch.