As scarce as it may be to fine neurological care here in Northern Tanzania, it is equally difficult to find psychiatric care and though these patients are often be provided care by a mental health officer for the district, the matter of a detailed assessment and treatment recommendations are, unfortunately, is not made by a psychiatrist. None are available here in the Karatu district and are mainly in the tertiary medical centers that are usually inaccessible to our patients for either reasons of distance or finance. Therefore, when we’re here, much of this work will fall to us as neurologists to get some training in these areas for several reasons. One is that there is a huge overlap in the medications and treatments that we both use, often in their side effects and interactions. The other is that patients with psychiatric disease may often present with neurologic complaints and vice versa, patients with neurologic disease may present with psychiatric complications. The best known and most recent example of the latter may well be NMDA receptor encephalitis or the autoimmune encephalidites in which predominantly young woman present with psychosis prior to going on and developing more obvious neurological complications like seizures and severe encephalopathies. 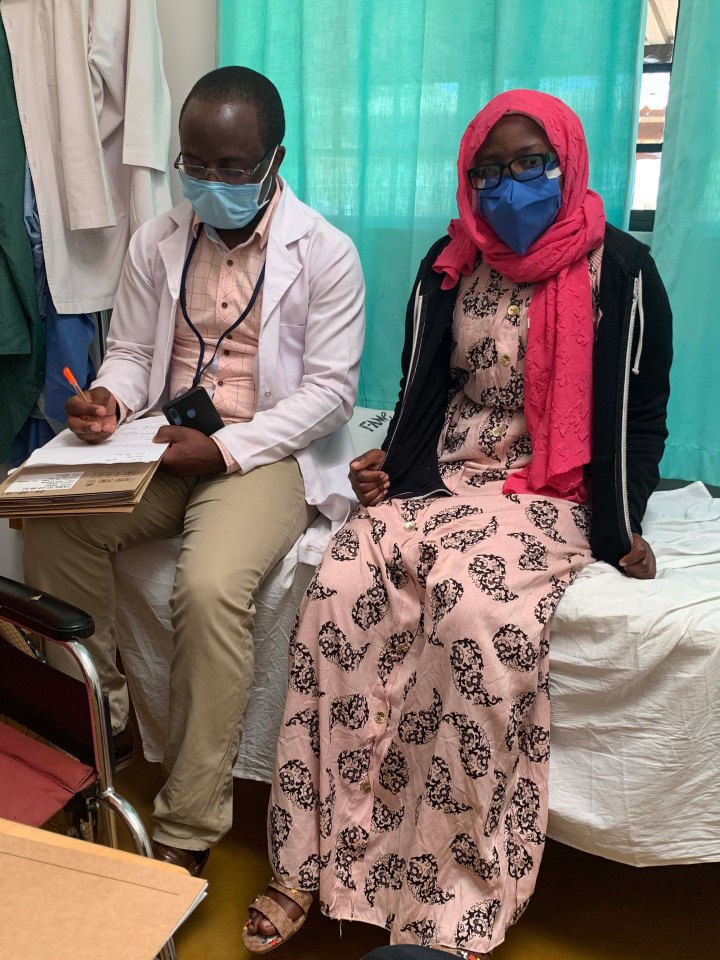 Dr. Adam taking a history of one our patients today

Today, we saw a young woman who we had seen on our last visit in one of our newer mobile clinics, Mang’ola, where we had diagnosed her with psychosis and quite possibly schizophrenia and had placed her on olanzapine on which she had been doing quite well. As we were not providing our mobile clinics this visit due to the combined situations of COVID-19 and the upcoming election here, the family had traveled well over one hour to see us because of how well she was doing on the medication. There was little else for us to add for the visit, but we made sure to refill her olanzapine given her excellent response to the medication. We also saw a middle-aged Maasai gentleman who we had previously diagnosed with depression and psychosis who was also doing well on olanzapine and who the family had brought in to see us in follow up and to refill his medications as he was doing well on them. These visits are always rewarding.

Perhaps the more impressive case of the day that was of a similar vein, was a young 16-year-old boy with a several year history of quite frank psychotic behavior and no history of drug use or any other possible contributing illnesses. He had done well in school, but these symptoms had begun shortly after graduating from primary school and prior to attending secondary school. He had frank visual and auditory hallucinations as well as voicing his desire to kill people and had been violent in the past. He had been treated with medications previously that were likely neuroleptic medications, but the family had stopped them as they had thought he was cured. Unfortunately, that was not the case at all and from the very moment the boy had entered our exam room with his parents, he never stopped rambling on, most often talking to himself and making very little sense according to those who could understand his Swahili. We could only engage him in conversation very briefly at best, and, when we did, his answers made very little sense to any of us. They did tell us that he never slept at home and also had a family history of a similar problem in an aunt of his. They were completely unsure as to what the name of the medication he had been on previously that had been prescribed by the local government dispensary, but it was quite clear that it was a typical neuroleptic medication as they do not have any others and, besides, he was no longer taking it. We offered to put him olanzapine, our go to antipsychotic, which is also an atypical neuroleptic medication and most often has few side effects. Unfortunately, it is also costlier than what he would be given at the dispensary so we advised them of this and offered to try him on the olanzapine as that cost would be covered by his visit today, though I did give them two instead of one month’s worth of medication. His case was quite consistent with schizophrenia given the age and it was rather heartbreaking to see these parents with their young son who, for all practical purposes, appeared to be possessed and it was not difficult at that moment to see how cultural beliefs of possession were created.

Another interesting case, that did appear at the outset to be totally neurological, but may have had some twists along the way was a young girl who presented in a wheelchair with the complaint of a six-day history of progressive weakness and numbness in her legs and then developed the inability to walk. This is a very common problem that we see in neurology not infrequently and usually triggers what we refer to as a “fire drill” in medicine. A fire drill occurs when the history is consistent with a disorder that can cause harm if not treated properly and quickly or if the diagnosis is not considered and is missed. In neurology, other similar histories that will do the same thing are a patient who complains of the “worst headache of my life,” which is sine qua non for a subarachnoid hemorrhage until proven otherwise.

So, here we are in rural Tanzania, with a young woman in a wheelchair who is giving us a six-day history of progressive weakness and numbness in her lower extremities without back pain and which means only one thing to a neurologist, which is Guillain-Barre syndrome, or acute inflammatory demyelinating neuropathy. The disorder, which is not uncommon, is an autoimmune disorder that is often triggered by a ubiquitous viral illness that precedes it and can progress very rapidly to complete quadriplegia and respiratory arrest, but is completely treatable and reversible. Missing the diagnosis of a potentially life-threatening, yet completely reversible treatment will ruin the day, or very likely even longer, of any neurologist. You hope for the fact that your physical examination may help you out and make you feel more comfortable, but that was not the case here. She had normal, if not brisk reflexes, normal strength and sensation in her arms and diminished sensation in her legs. Her strength in the legs was quite weak, but as I teach to all my residents and medical students, motor testing on your examination is not objective. In cases of GBS, there are no confirmatory tests at this early stage, only ones that will support your diagnosis, and though we could perform one of them now, the lumbar puncture, it would not help us to exclude the possibility of her having it. The other test, the EMG, or electromyogram, can also be helpful, but we do not have it here and, again, it would not rule out GBS at this early stage.

There were also a few pieces of history that made me a bit concerned about whether this was could also be non-physiologic, or otherwise known as a conversion disorder. She had been sent home from school a week or so before symptoms had started for having had hypoglycemia and the other had commented that there were girls at school or who had been sent home with similar symptoms. And her affect was just a bit off for me. So, we had a bit of dilemma on our hands in regard to what to do with her in this setting. One option would be to put her in the ward to watch her overnight and see if she got worse at which point we could transfer to Arusha or to KCMC for more definitive therapy (plasma exchange or IVIG) and the potential of having a ventilator should her respiratory function go south quickly. She had absolutely no shortness of breath or difficulty swallowing difficulty. The other option, and the one we eventually took, was to explain things very carefully to her and her mom about what to look for what to expect. Should she progress in any fashion, they would actually be closer to Arusha from where they were living, which was Mto wa Mbu, than they would be here in Karatu at FAME. It was a tough call, but when explained to the mother and patient, they preferred to go home regardless and would be vigilant in regard to monitoring her over the next days and at any sign of progression they would be already on the road heading to one of the bigger hospitals in Arusha where the proper services would be more readily available.

I think everyone earned their keep this day and there was a good amount of teaching that could be done with the cases we had.