Saturday has always been a quiet day here at FAME, though without our normal neurology outreach program, it has been quieter than normal and today was no different. I took the opportunity to come in a bit later than normal as I was still battling my cold, arriving to the normal night doctor’s office, which is doubling as our neurology clinic, at around 8:30, our normal starting time. The fact that there were no patients waiting there for me was a pretty good indication of what the pace of the day was going to be and it gave me a chance to catch up on some of my busy work that had been piling up. Kitashu and Joel were already waiting to register patients and get their vitals, and Revo, who had just graduated from medical school and will be starting his internship in November, was waiting with them for the patients to arrive. Joel (at the computer), Kitashu (with charts) and Angel checking in patients for neuro clinic

As I believe I had mentioned before, FAME is in the process of implementing a new EMR that will be a huge undertaking, and having just begun on Monday, I am at the front end of the learning curve with all the other doctors here, though I have been through this process on several occasions before. In fact, when I had just started my training as a neurologist at the University of Virginia in 1986, they had elected to install one of the very first pre-EMR systems, which was known as SMS and was from Siemens, though was merely a “physician computer order entry” system that was designed really for capturing charges rather than maintaining a patient’s medical record. I only mention this because, at the time, this was cutting edge stuff that even though it is now nearly 35 years later, the EMR is still the bane of every physician’s existence. Every physician, that is, unless, of course, they are employed in the industry or in some way their job performance is heavily based on using and promoting the system in their workplace. That being said, I have actually become a proponent of these systems which can function very well as long as there is the realization that there are limitations on what they can and can’t do and everyone must have realistic expectations.

At UVa in 1986, I was actually a member of the resident group that organized a strike against the university, refusing to use the new system until they proved to us that it could be used efficiently. I and seven other residents were brought to the Medical College of Virginia, where they had also recently adopted the system, and assured ourselves of its usefulness before we were willing to allow its implementation in our institution. I hadn’t realized at the time, but the event had been written about and published and it was not until years later that I was telling someone the story and they commented that they had remembered it from one of their information systems journals.

The EMR that is now being installed at FAME will have the means of tracking and recording patient’s history, symptoms, examination, laboratory testing, diagnoses, medications and procedures during their visit here and will be available for recall at any time in the future. There will always be growing pains when implementing these types of systems and it is imperative that feedback from the users be captured and utilized going forward to continually improve upon on operations. I hadn’t gone through the formal training process, but as part of the implementation process, there were IT folks who have been her this week and will also be here the coming week to help with things and, thankfully, they were available to me as well to help with my understanding of the EMR. There were a number of suggestions that I had for them in regard to making data entry more efficient for the doctors and I met with them today to discuss some of things I had noted that would be helpful.

One positive thing for me was already the fact that I found out that the system was web based meaning that, for one, I could use the system on my Mac. This was of huge importance as I had been bothered all week by the fact that the keyboard they were using in my office had an extra key next to the “z” key in the lower left corner, making the shift key smaller. While typing, I would continually hit this key and then have to correct it, greatly slowing my typing down due the frequent errors I would make by striking this key. I could now simply use my MacBook Pro laptop on my desk in the night office and here no issues with mistakes while typing or, at least, they were markedly reduced.

The other issue that became immediately apparent with the EMR was the diagnoses that were used in the system. When I tried to put in “Parkinson’s disease,” I could not find it, but it did have “Parkinson disease.” The same thing occurred when I looked up “Alzheimer’s disease” and “Bell’s palsy.” I have never seen these disorders referred to before without their possessive apostrophes and I was certain that there must be an error somewhere in how they had been uploaded to the system as there really could be no other explanation for such an obvious omission. I scheduled a quick meeting with one of the IT folks to get to the bottom of this and, when I mentioned to him about obvious error that had made, was told that they had merely loaded into the system the 2015 WHO ICD-10 list of diagnoses. This couldn’t actually be true, of course, as surely the WHO could not have made such obvious errors in their listing of these common diagnoses, but much to my surprise, this was indeed the case that these diagnoses were listed in this manner on the WHO website when researching their list of diagnoses, not only for the 2015 version, but also for every later version as well. I have still not had time to research this issue, but can assure you that I will find an answer. For now, though, I will be using the WHO 2015 ICD-10 diagnoses here at FAME and will have to be appreciative that at least we now have an EMR, with or without an apostrophe.

Having finished with our patients by lunchtime (around 2 pm here), and having met with the EMR fundi (expert), I was able to head back to the house and relax for a bit before heading out for another bike ride. I tried laying briefly in my hammock, but unfortunately, the sun was already high and the limited cover of the roofline had been lost for the day. Given the equatorial rays here with their incredibly intense nature, I decided to spend only a few minutes in the hammock so as not to cook myself. My ride today would be in the opposite direction from town on a back road that we often walk along for exercise. The road very quickly deteriorates into essentially two deep ruts with a small raised section in the middle that works well if your balance is good. The ruts are so deep that they are impossible to pedal, so staying clear of them is essential. I came to a very steep downhill portion of the road which, if I went in the opposite direction, would lead to Caroline’s house on the top of a hill overlooking the coffee plantations that occupy the hills leading up to the Ngorongoro Conservation Area. Remember years ago, taking my then Land Cruiser up the hill and at a very acute angle and Megan Richie thinking for certain that we were going to die. I believe Ray Price had similar concerns last September with my driving, but alas we were all safe in the end which is what counts. As I told him then, that’s what these vehicles are built for. 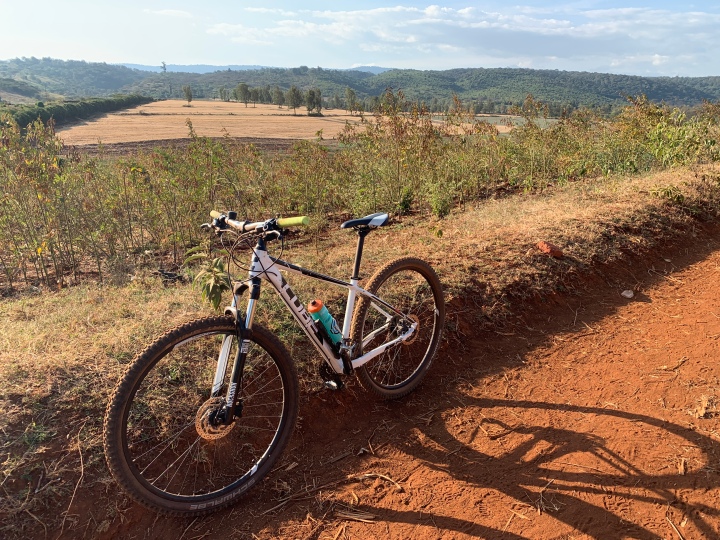 Riding through the fields outside of Karatu

Taking the downhill section at a fairly rapid pace, I passed three young boys who were playing alongside the trail and one of them chose to run after me as long as he could. Though I have not completely quelled all of my apprehensions regarding this new sport for me (recall that I am normally pedaling at high speed on a flat surface without obstacles such as rocks, ruts or plants), I was able to quickly outpace the young boy which did not require a tremendous amount of effort on my part. At least the boys got a big kick out of chasing after the mzungu, even if it were only for a very short distance. It was a gorgeous day and I had a general idea of where I was heading and, this time, I had brought a water bottle for my thirst along the way. Also, there were no cars to kick up dust as they had yesterday on the FAME road. I made my way along the trails until I happened upon the road to the Manor Lodge which is easily recognizable with its two tall and pure white square columns placed at most of the intersections to clearly identify the route to this high end lodge. There road, of course, is dirt and the intersections are hardly ones that would be identified as such by anyone from home. They are nondescript and, if it were not for the columns, the route could be easily overlooked if one were either trying to get back to the tarmac or heading up to the Manor Lodge for a meal.

Capturing my ride on Strava

I finally made it to the tarmac, though quickly realized that I had several hills to ascend before arriving to the outskirts of town and the FAME road that I would take home. Thankfully, the bike is equipped with all of the gears I had previously mentioned as they were an absolute life saver. To say that I made it up the hills with a minimum of effort would have been a complete fabrication because it actually required everything I had to keep myself moving forward. I would have given anything for one of those newer, fancy bikes with the electric motor assist to have made it look much easier, but that was not to be and, so, I ground it out with anything but the form of a Tour de France rider, eventually finding the top of the hill and none too soon. I coasted off of the tarmac and onto the road leading to FAME, though now had to contend with the dust clouds from the vehicles passing in both direction, though infrequently. Had it not been for the vision of a nice cold shower awaiting me at home, I’m sure that I would have crumpled in a heap somewhere along the road, hoping to have been rescued indignantly by a passing bijaji driver. Instead, I made it safely home, no worse for the wear, and made a beeline for that life renewing shower I had envisioned.