Our lunch table on the veranda

A year or so ago, I was asked to incorporate “wellness days” into our schedule here at FAME in order to accommodate the new program being adopted by residencies to help with the issue of doctor burnout. Though this is indeed a very serious issue that has been at the center of attention for nearly every governing body dealing with any level of medicine, it has been particularly critical in medical residencies where the old ways of working 24/7 and sleepless nights are no longer acceptable. Work hours were instituted, as well as nighttime call rotations, and these have certainly helped, but medical training can still end up being a very dark period for many residents, especially in their early years where now managing incredibly more complicated patients than when I trained over thirty years ago can bring even the most accomplished doctor to their knees. Wellness Days were instituted to allow residents to have a bit of breathing room during their normal busy schedules, allowing them to catch up on personal matters or to just have a free moment where they don’t have to worry about their beepers.

On a side note, I’ll mention a funny story regarding the ringtone on my phone. Since the beginning of cellular phones, I have always kept the old fashioned “telephone” ringtone since that is what I have felt most comfortable with and is what I respond to most readily without having to think about it. About a year ago, while working as an attending on the ward service in the hospital, my phone would ring occasionally during rounds and I would notice an immediate reaction by the residents that would be best characterized as an immediate need for action and their hearts would skip a beat. It turns out that this was a simple Pavlovian response to my ringtone which just happened to be the same ringtone used by the stroke phone that the on call stroke resident would be carrying and responsible for. They asked me (very politely, of course) to change my ring, which I promptly did, but for only about two days as I just could not get used to it and, so, changed my ringtone back to the original tone that worked for me, but was disturbing for the residents.

The view from Gibb’s

A pathway at Gibb’s

Now, you might ask why I can’t just turn my ring off when I’m around the residents, which is a very good question, but the answer is that if I do that, I will never remember to turn it back and on and will then wind up missing calls. You might also ask what this has to do with wellness days? First, it was not only the residents who were having their Pavlovian moments with my ringtone, but it was also me as I was unable to alter my behavior after so many years using the same ringtone. But more importantly, the residents were suffering from very strong patterned negative response to the ringtone that had been caused by their days and nights of carrying the stroke phone while on that rotation. It would be interesting to do a study to see how long it takes for them to lose that response, or maybe someone has already looked at that, but regardless, the concept of wellness days is an attempt in some fashion to partially mitigate that behavior.

The lily pond at Gibb’s

So now back to our wellness days in Tanzania. My initial response when being asked to incorporate these days was that “every day in Tanzania is a wellness day,” but there was probably just a bit of self-centric thought in that reply as I would be projecting how I feel about my time here without looking at it through their eyes. And regardless, wellness days are now an integral part of the resident scheduling, most often requiring some manner of coverage when at home, though here we are able to not have clinic during that time and all of the residents can take it together. So, since instituting wellness days here, I have simply selected two half-days during the month for the residents to be completely off and to enjoy themselves during what would otherwise be clinic time. Today was one such day with plans to be in clinic during the morning and then spend most of the afternoon at Gibb’s Farm having lunch and relaxing there afterwards.

On the trail to the elephant caves…. 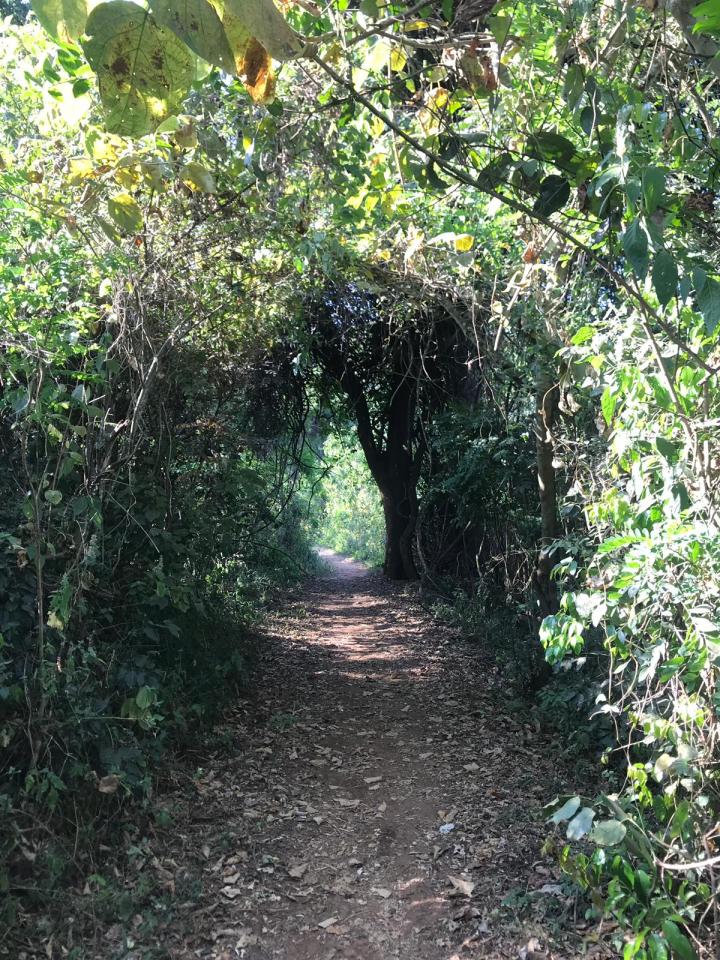 Along the trail in the NCA

Our previous Saturday had been very quiet and today was following the same pattern, although the patients did seem to trickle in throughout the morning. I’m not certain that any of the patients were necessarily “blog worthy” in regard to their medical aspects, but we did have another static encephalopathy child at the end of the clinic that came after we had closed registration, but the family had traveled a long way to see us and there was little thought of turning them away. It was a Maasai family and the patient was 9-years-old, having been normal at birth and then suffering a febrile illness in infancy that devastated him neurologically, leaving him with a very severe static encephalopathy and quadriparesis. He had briefly had seizures at the time of the febrile event, but has had none since by their report. He was clearly very well cared for by his family and had already been to rehab where they had been instructed in what types of physical therapy he could benefit from. He was significantly underweight, though, as he had some swallowing difficulties and this was a place where we could certainly intervene. Marissa placed him on some diazepam for his spasticity and contractures and we referred them to a feeding program that is available in Arusha at one of the hospitals there. In such a harsh environment as here in East Africa, we are constantly reminded of how wonderful it is that these children are so wonderfully cared for by their families as there are essentially no social safety nets here to help if anyone is in need. In the past, this would not have necessarily been the case as these children didn’t survive past infancy in most tribal cultures and it is only after the last decade or so that families have elected to keep these children and care for them. 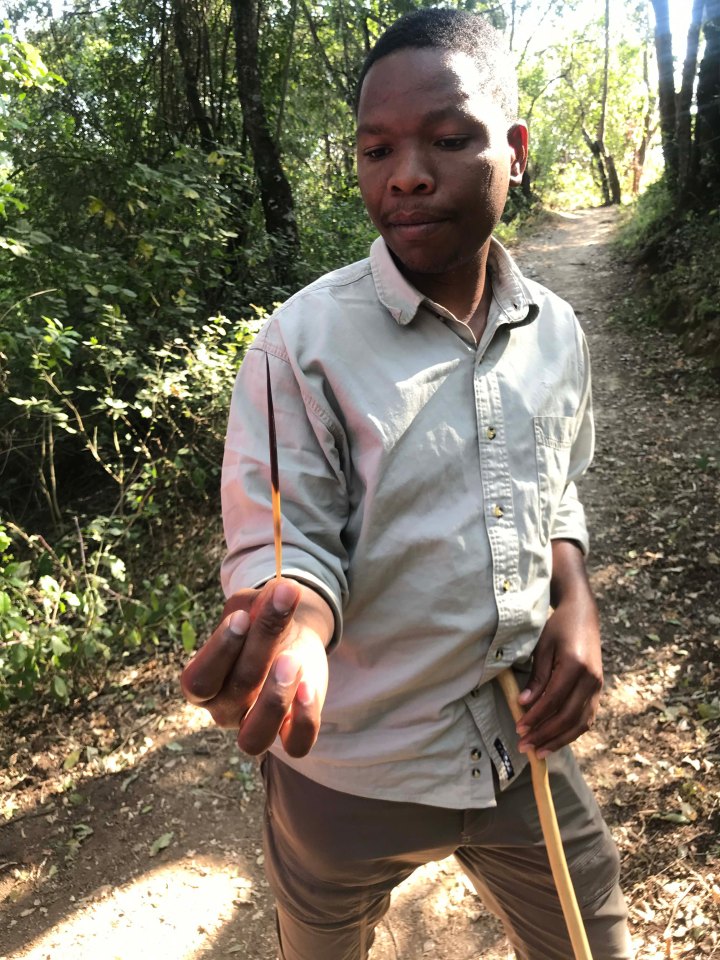 The NCA ranger with a porcupine quill

So, after everyone heading back to the house with some of us changing clothes, we loaded into Turtle and made the trek (drive) back up to Gibb’s Farm, using Marissa’s favorite shot cut going there as we would stop in town on our way back to fill up with fuel in Turtle given that we were going to Ngorongoro Crater the following day and I never like traveling without a full tank when possible. Gibb’s Farm, as most you have become accustomed to by reading my blog, is a top tier resort frequently, if not always, ranking among the top several resorts in the world. It is clearly my favorite in the region, for many reasons both sentimental and otherwise, and has been the favorite of the resident that I have brought in the past. I have never stayed at Gibb’s, but I have eaten lunch and dinner there on many occasions and can vouch for both meals being well worth their full price, though we are offered volunteer prices due to our volunteering at FAME. It is their way of acknowledging the work we do for the community and many of those who work at Gibb’s have come to see us both for themselves and their families over the years. 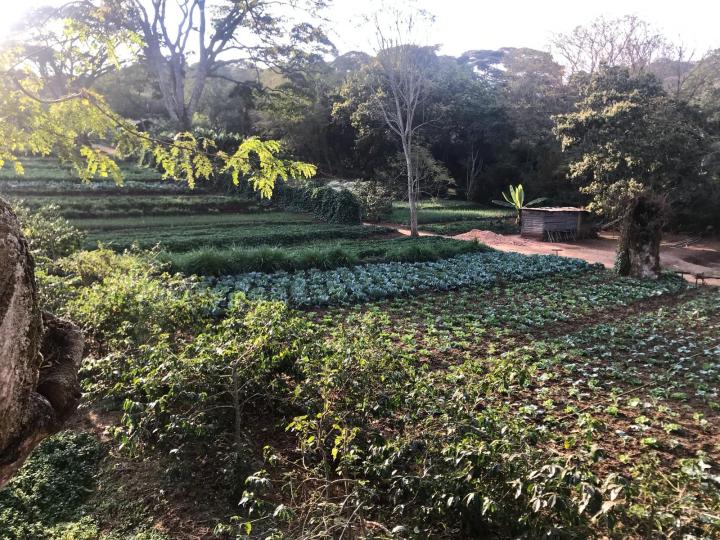 The vegetable gardens at Gibb’s

The vegetable garden at Gibb’s

Our lunch at Gibb’s is perhaps everyone’s favorite and I couldn’t think of better wellness afternoon than this, not only for the incredible food that is served, but also for the relaxing atmosphere in one of the most beautiful settings that I have experienced anywhere. We always sit on a table on the veranda with views of the entire countryside, birds singing and the most attentive service that one could ever ask for. Lunch is buffet style with salads, antipasti meats, soup, quiche, samosas and more, all made here on the premises including the cheeses. There are many main courses to select from and fresh baked breads. Coffee, of course, is included with the meal as this is a coffee plantation, after all. And then there are the deserts. After a very long lunch during which we’ve all had several plates and are all in agreement that each of us might very well explode, we decide what we all do for the afternoon. Ray, Marissa, Andrea, Leah and Kyra have all decided that they will hike to the elephant caves that are inside the Ngorongoro Conservation Area (or NCA) a short distance. I have been on the hike several times and chose to sit on the veranda working on my blog while Mike didn’t really have any excuse not to go other than that  he didn’t feel like it and really wanted to finish his book. 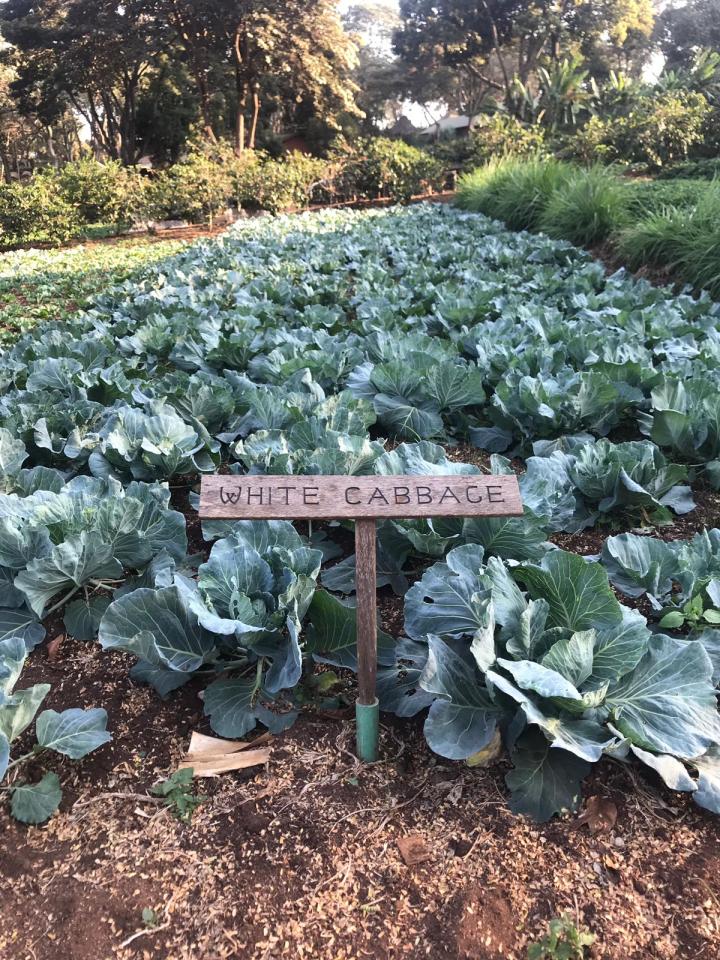 Rooms at Gibb’s overlooking the garden

The elephant cave walk is about a two hour roundtrip hike traveling uphill on the way into the NCA that crosses atop a very tall waterfall prior to arriving at the caves which are really holes that the elephants dig while extracting necessary minerals from the soil. It is rare to see the elephants there as they usually smell hikers long before they arrive and vanish into the forest. You can see other animals on the hike, though, which is the primary reason that you are accompanied by a ranger from the NCA. While Mike and I relaxed on the veranda doing our busywork, the others enjoyed their hike to the caves and were back shortly after 5 PM. Ray initially informed (more like accused) me that I had forgotten to tell them to bring water (which he bought at the NCA gate before hiking), but then reconsidered, later admitting that any reasonable person planning to take a hike in Africa wouldn’t have to ask if they needed to bring water with them. Regardless, they survived their “ordeal” and made it back to Gibb’s safe and sound. The others decided to take a tour of the gardens at Gibb’s, which are spectacular, while Ray came up to the lodge and join us on the veranda, though his primary motive was clearly the Moscow Mule that he ordered within moments of his arrival. We didn’t leave Gibb’s until well after sunset, having made the most of wellness time there. 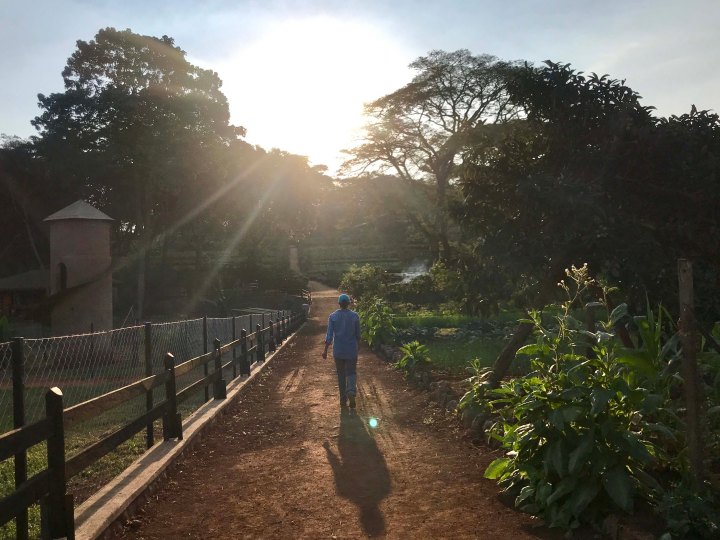 Kyra walking about the livestock enclosures 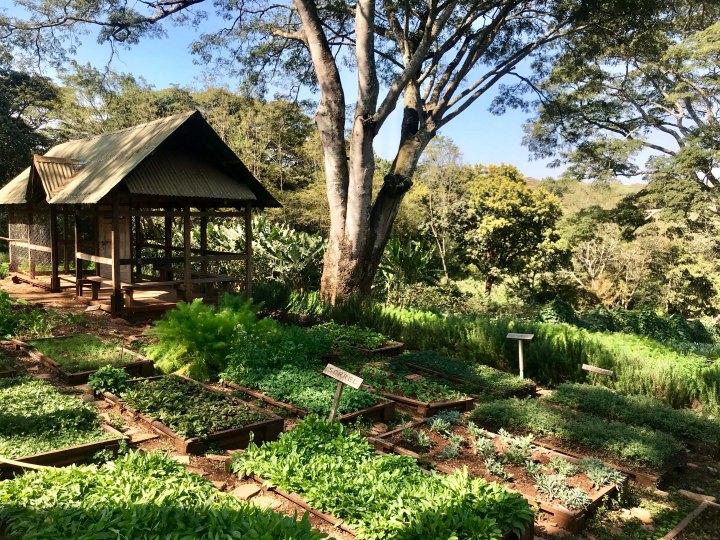 We traveled through town rather than taking my shortcut, much to Marissa’s delight, as Turtle needed fuel for the following day. There was still lunch to be made (peanut butter and jelly or PB and honey sandwiches) and putting things together for the journey to the crater tomorrow. We were not leaving until shortly after 6:00 AM, which wasn’t too bad, but everyone wanted to get a decent sleep if possible.

“The most interesting man in the world…” 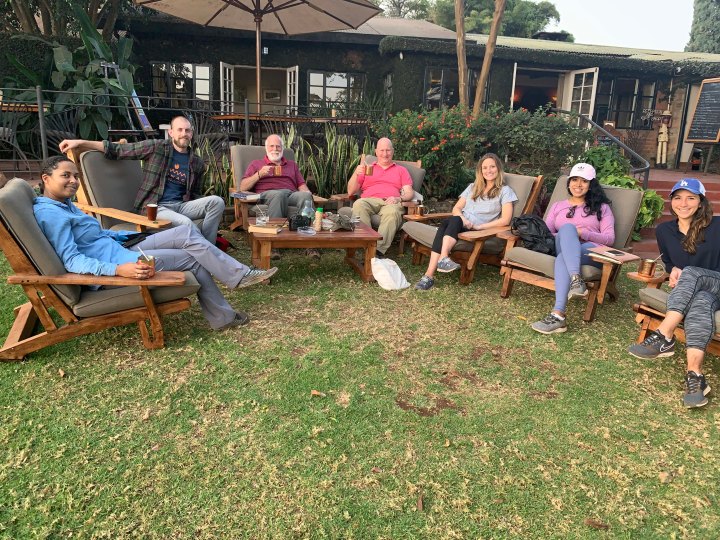 After the hike enjoying some drinks at sunset