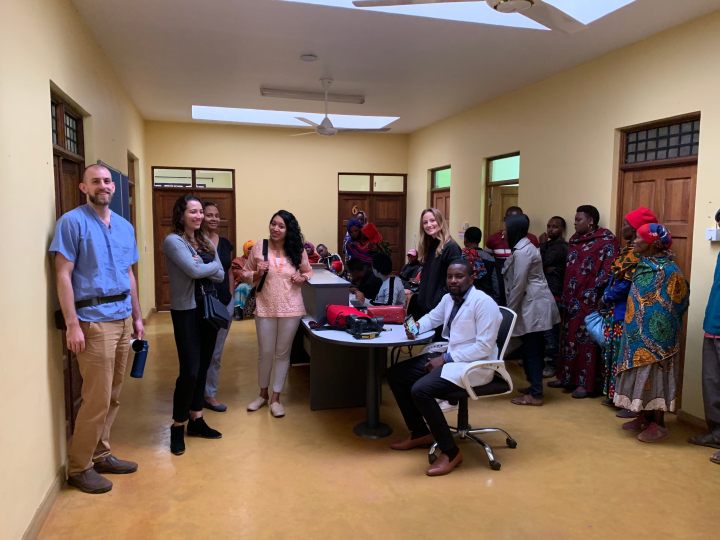 It’s another gorgeous morning, though heavily overcast. No worries as it will burn off well before noontime and the skies will clear. The temperatures have all been much less than the team had anticipated which is a frequent misperception. Though the sun here on the equator can be brutal, shining directly down upon you, the days are very comfortable and the nights are rather cool. Doha was an oven with temperatures well over 100°, but here it is pleasant and the walk to work is always a joy. It’s our second day of clinic and at morning report we learned of a patient, a Hadza from the Lake Eyasi region, who had been sent in overnight with a headache and was now in the ward waiting to be seen by us. Once we checked to see what there was to be seen  in clinic, I would have one of the residents break off and see the inpatient. The Hadza, or Hadzabe, are one of the bushman populations of Africa and are the last hunter gatherers still in existence here in Tanzania. They live in the Lake Eyasi region which is a very remote area and where we used to do a rather large week-long mobile clinic every month to provide medical care to the Hadza as well as the Datoga, who were another tribe in the Lake Eyasi region. We no longer do these mobile clinics as the project ended when the grant funding had ended. We had made good contacts in this region, though, and continue to see patients referred to us based on the work that FAME had done there previously. Angel at work in the clinic

This morning, I had opened up the ward where our exam rooms are so that Angel could get to her computer before we were done with morning report, but somehow, instead of the patients waiting outside where they sit before being brought in, they ended up in the ward and it was a bit of a mob scene. Angel quickly got things under control, though, and we were able to get started essentially on time. Marissa had a steady flow of pediatric cases, but several of them had very depressing histories of either hypoxic-ischemic injury at birth or some meningoencephalitis as an infant that left them with severe static encephalopathies, a few with seizures, and all completely non-functional. We had very little to offer in terms of treatment other than to give them their seizure medications and some baclofen for their spasticity. Marissa was incredibly impressed with the care one of the children had been receiving as they had absolutely no contractures and had been receiving physical therapy. One of the children had gone through about two hours of resuscitation at birth and was very devastated neurologically. This is certainly part of the resident’s education here in regard to unintended consequences meaning that you have to consider all of the consequences of your actions and that what we often perceive as doing good came result in a dramatic outcome that may create an unreasonable burden for another. 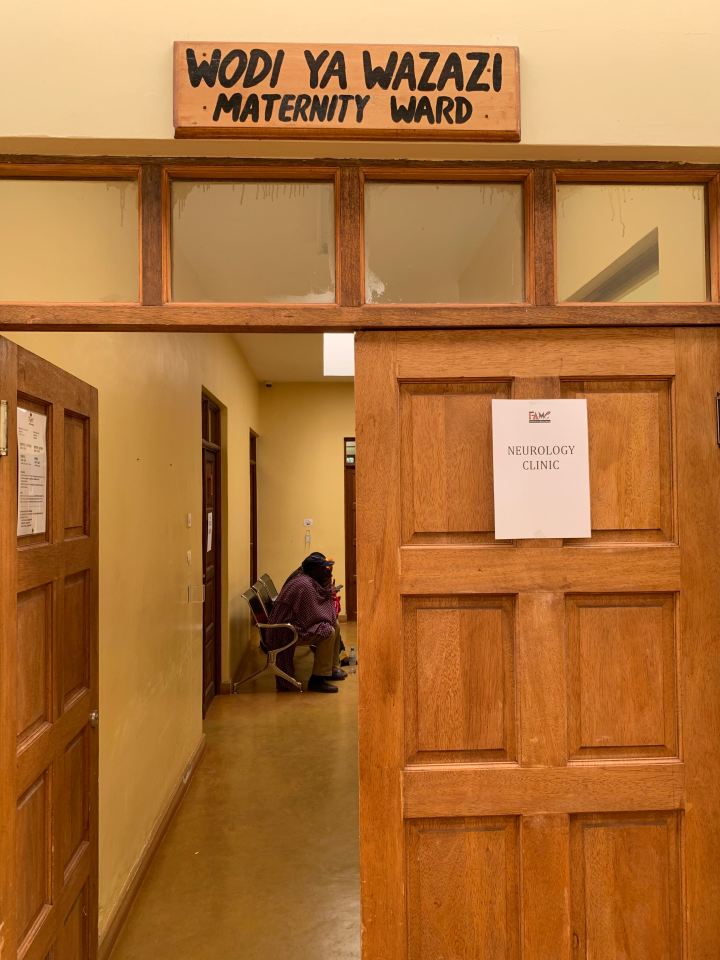 By midmorning, Mike had been able to see the women from Lake Eyasi and the story was a bit different than just a headache. This is quite common for us here as patients are not always as they are “billed” and the story may be entirely different than what you were told once you get an accurate history. She was a 55-year-old woman who had been complaining of a headache over the last month and two weeks ago, she had had a generalized convulsion. Since that time, she had been completely mute and on examination she had impaired language function and a right hemiparesis. Having the history of the preceding headache, the seizure, and now the focal examination made us extremely concerned about a focal left hemispheric lesion. We set her up for a CT scan with and without contrast that was done mid-afternoon and demonstrated what a large hemorrhage with what we felt was vasogenic edema associated raising concern for an underlying mass lesion. Unfortunately, when she was given contrast, she had not been NPO and she promptly vomited and became diaphoretic. At least this wouldn’t preclude giving her contrast again as long as she had been NPO prior so as not to have the same problem. Meanwhile, we would also add CT scans of the chest and abdomen to rule out a primary mass lesion, though in the end, it wasn’t clear what we could actually treat in any of these scenarios. Having a primary brain tumor or systemic cancer with a brain met would clearly have a very poor prognosis regardless of what her underlying process was and we would very likely have a goals of care discussion with her and her family.

Our clinic day ended up being about the same size as the day prior, 25 patients and more than enough children to keep Marissa happy. We weren’t able to get back to the little girl in the ward with the encephalopathy until the end of the day and Marissa and I went over her case again. Despite having been on multiple therapies including anti-TB, anti-viral, etc., etc., she hadn’t really improved, but on the other hand, she wasn’t getting worse. We decided to recommend a repeat lumbar puncture for the morning  and, possibly, a repeat CT scan. Marissa and Dr. Annie working together with a peds patient

Such bright and cheery dress….

On returning home, several at the house wanted to go for a walk and I hadn’t yet taken everyone out to show them the walking trails around FAME, so in order not to lose anyone to the remoteness and unfamiliarity of this location, I took Marissa, Kyra and Andrea out for short walk. The area around FAME is primarily comprised of coffee plantations that back up the Ngorongoro Conservation Area and other fields growing an assortment of crops from pole peas to other legumes to maize. The weather was just gorgeous for a walk with the rolling fields most immediate in front of us with a few small herds of grazing livestock and their owners. In the distance, the Ngorongoro Highlands dominate the horizon rising up to the crater rim and the crater beyond. It’s incredibly placid scenery that I have become so accustomed to over the years, but is almost shocking to those who see it for the first time as this is not how one imagines Africa, perhaps. This is our Africa, though, and why I have continued to come back year after year. 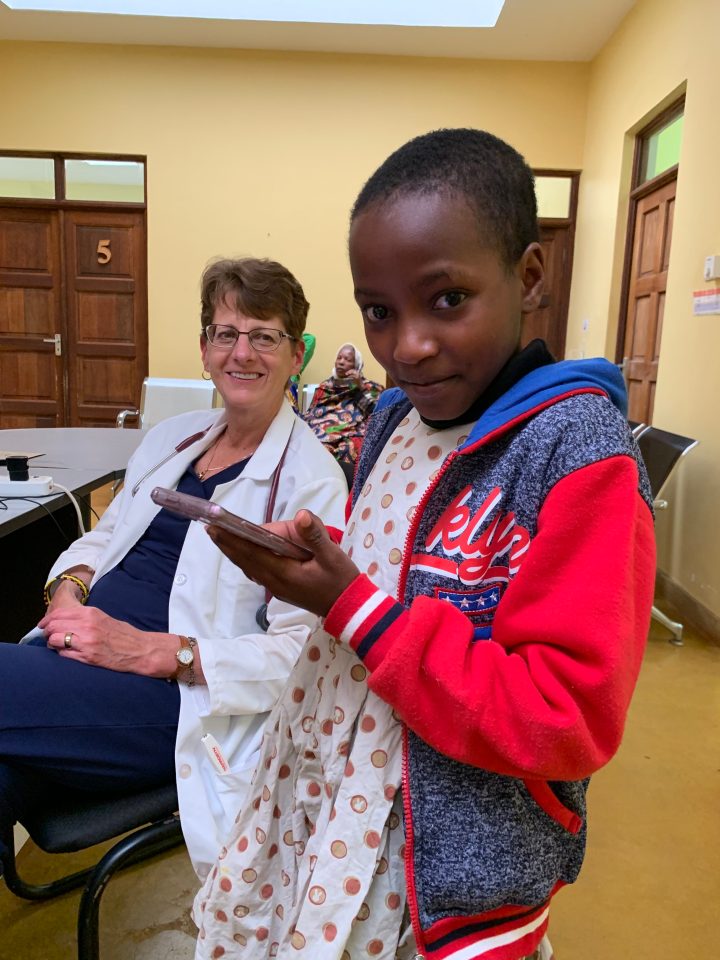 One of our patients out at the nursing station making mischief 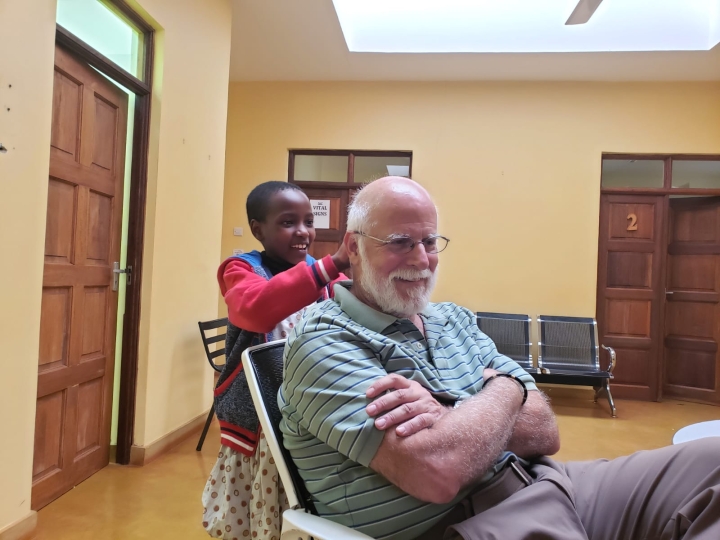 It was Phoebe’s (the FAME volunteer coordinator) birthday today and she had invited all of us to come down to the Patamu Lodge at 7:30 PM for dinner and drinks. As we had our dinners prepared for us already, we decided to eat at the house and then head down. Neither Mike, Kyra nor Marissa were up to the adventure, so Leah, Andrea and I joined Dr. Joyce, Joyce Cuff and her sister Terri and we all drove down to the road to meet Phoebe, her friends and others from FAME near the tarmac at Patamu. Phoebe had also made a vegan chocolate cake that she thankfully cut before their food arrived (it typically takes up to an hour here for your food to be served) as we hadn’t planned on staying for the entire evening as we were all exhausted from the day. The cake was delicious (and messy) and we made it back home by around 9 PM. Mike had gone to bed already while the rest of us glanced at the stars for a bit, though the moon was brighter than hoped. Everyone retired early except for Leah, who had work to do on her emails, and me, working on my blog until the wee hours.