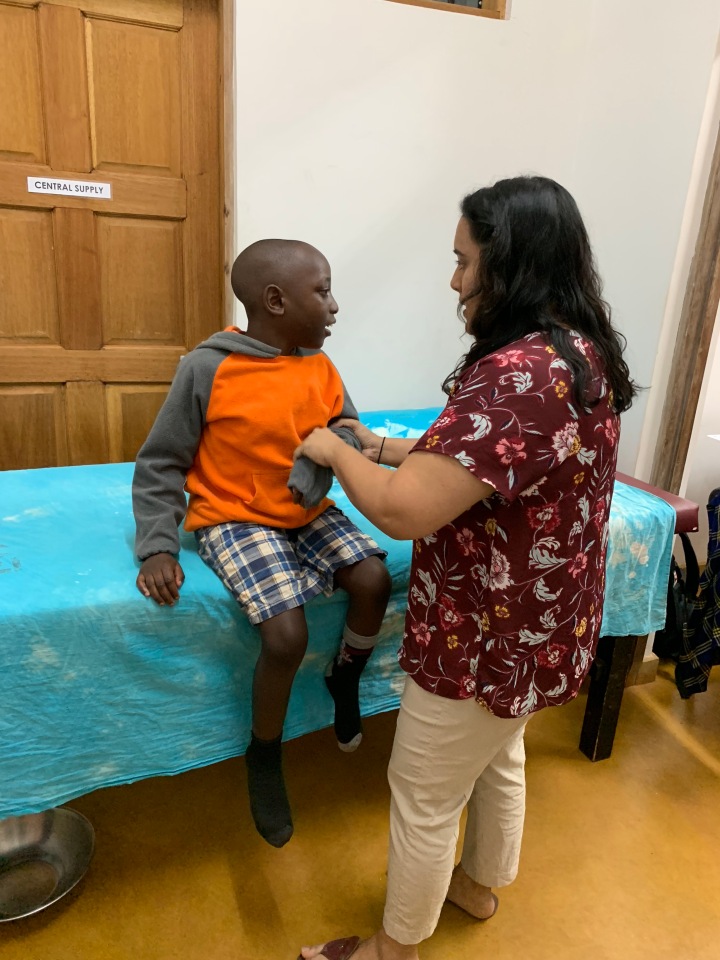 Amisha evaluating one of her many children

We had survived our trek back from the Serengeti despite a bit of car trouble on the way home and I would have to arrange some repairs with Soja once again to keep everything in proper running order. It was already a given that he would be swapping out the borrowed alternator for the new one he had ordered in Arusha and had arrived after we had left for the Serengeti. Now he would also have to repair the one rear shock mount that had broken (thankfully, the Land Rover has two shocks for each rear wheel) and the seal for the opposite rear wheel that was leaking significantly spraying grease over the wheel. 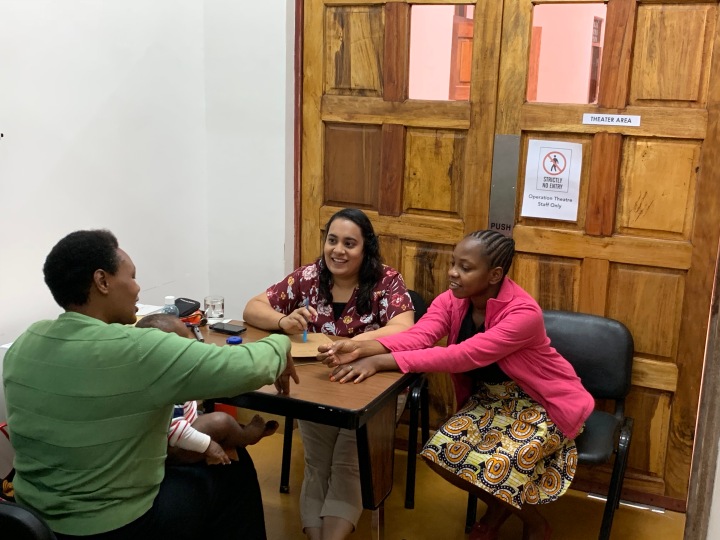 Amisha and Grace Mshana evaluating a patient. Grace is the daugher of Dr. Mshana, who was the first Tanzanian doctor to work at FAME and now retired, and Mama Mshana, who still runs the child and maternal health clinic at FAME. She’s a statistics expert and pitched in to help by translating for us

These were both simple matters, as it turns out, and he would get the vehicle back to me at the end of the day. I know it sounds like Turtle has had more trouble than one vehicle should have, but I will point out that we had just acquired the vehicle and hadn’t time to really put it through its paces. Besides, Land Rovers, which do happen to be my favorite off-road vehicle here, do take a lot of TLC with constant repairs and upkeep compared to the alternative Land Cruiser, but it is much, much less expensive to work on Land Rovers than it is on their Japanese brethren. Safari companies run 95% plus Land Cruisers these days, while private vehicles are 95% plus Land Rovers for those reasons. Having driven both of these vehicles extensively here over the last years, I will say that I much prefer the stability and toughness of the Land Rover over the Land Cruiser. In the end, of course, it is very much personal preference.

Grace and Amisha evaluating a patient

Amisha has a fan

At morning report we were able to hear about the patients from over the weekend, including our gentleman with the question of Tb and his focal examination. Also, we had the addition of two volunteers who had arrived yesterday, Mark and Monica, who were both obstetricians from the Midwest and had been to FAME twice in the past. They were staying with Steve in his house, so he no longer had a bachelor pad to himself. Knowing Steve, I’m sure he enjoyed the company there, though we continued to have him over for dinner each night which had been the normal course of things for our entire time here. It was also Lindsay’s birthday (no, I won’t divulge her actual age here) and so, in addition to her special breakfast at the house, there was a loud round of “Happy Birthday” sung at report by all in attendance, mzungu and Tanzanian alike. I will say that I’ve had my birthday here nearly every year since 2011, and though I don’t recall ever having been sung to in morning report, I did have one of the very best birthdays of my life two years ago for my sixtieth that was orchestrated by Jess Weinstein, Jackie Herold and Pauline Diaz (our volunteer coordinator at the time) and was an all-out surprise bash held at the Highview Lodge overlooking FAME.

In my calendar for our clinics, I had indicated which of the clinics should be announced to the community, but unfortunately there was a small communication glitch in that I did not specifically say “not” to announce those other clinics. This week (Monday-Wednesday) was therefore announced to the community and I hadn’t actually planned it that way. We had been instructing many of our follow up patients to come either today or this week and given the appearance of the crowd waiting to register to see us, there was quite possibly going to be an issue with our volume for the day. Amisha had a great idea of giving the follow up patients whom we instruct to come back to check in something to identify them so they don’t get caught up in the chaos that seems too often occur at the beginning of the day where it is also often that we may reach our maximum number of patients to be seen. 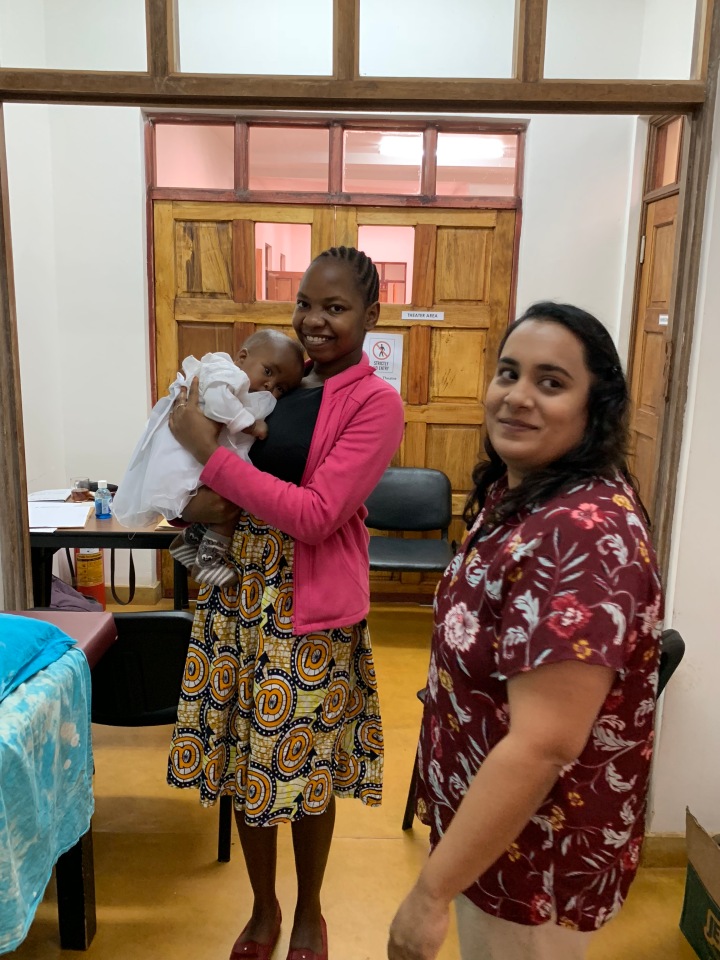 Believe it or not, Amisha was willing to share, at least momentarily

It frequently occurs that we’ve reached that maximum number and a long-standing patient of ours may show up who I do not want to turn away and so they just get added to the list. Though there is so often a huge crowd out front that it’s difficult to tell which patients are where in line, but if you somehow call a patient out of sequence, it can often create a stir. We would identify the pediatric cases and save them for Amisha, but we would always have to be careful not to put them too far ahead in the lineup. Considering that many patients may have to wait the better part of the day to see us, it’s certainly understandable. 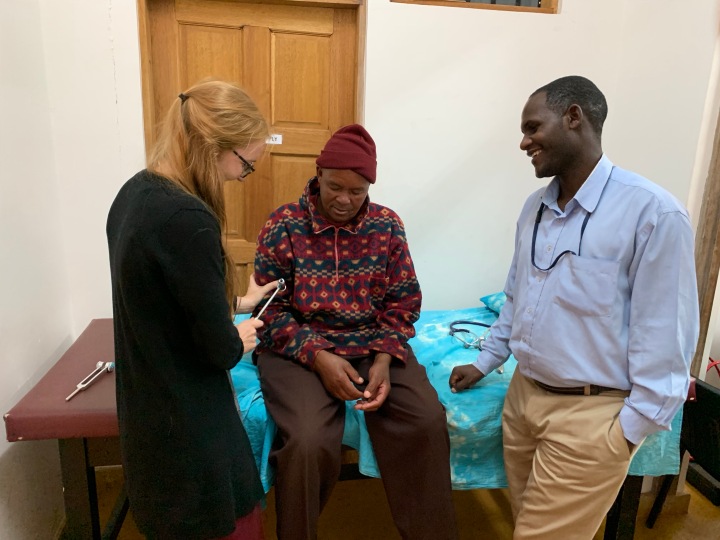 Lindsay and Kitashu evaluating a patient

Luckily, today we were able to locate our follow up patients with reasonable success and had them all seen without missing a beat. Amisha was totally thrilled as several patients who she had started on anticonvulsants were now seizure-free, and, although it had only been several weeks, it was a very good sign that we were at least heading in the right direction with their therapy. 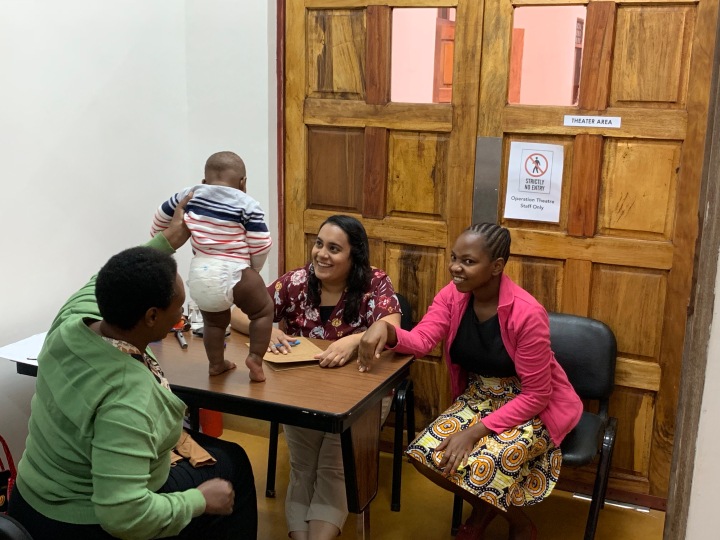 We had decided to have dinner at the Golden Sparrow to celebrate Lindsay’s birthday as we hadn’t been there yet this visit and the residents had heard all about it from past participants at FAME. Unfortunately for me, I still felt a bit under the weather with a GI issue (very atypical for me on these trips) and, so, by the time dinner rolled around, the best I could do was to shuttle everyone down to the Sparrow and have them promise to behave themselves (the last part is a lie). There did have some “adults” along with them in the form of Steve, Mark, Monica, and Lisa, the respiratory tech volunteering for the month, and, therefore, I had some reasonable expectations that no one would get into too much trouble. 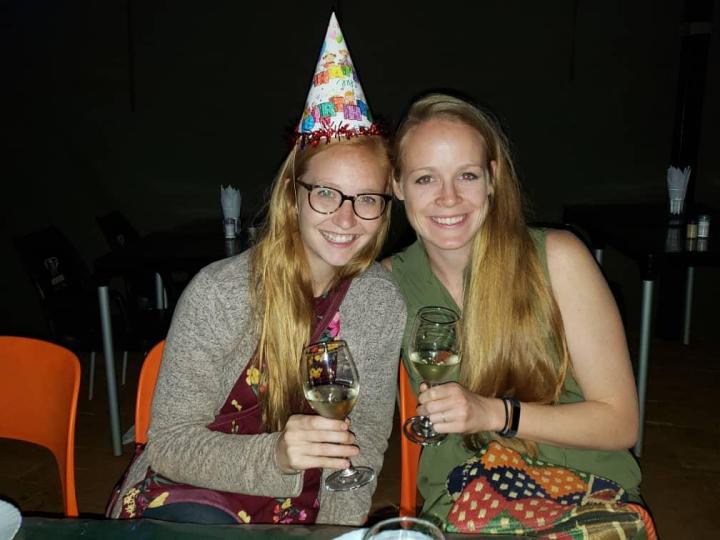 Lindsay (birthday girl), Anne and Hannah with Peter to Lindsay’s right and Selena to Hannah’s left.

As a bit of history for those who have not been following this blog for long, there was once a small bar here by the name of Carnivore that served the best grilled chicken in Karatu. In fact, that’s all they really served; grilled chicken, chips (French fries) and fried plantains. Oh yes, and lots of beer and wine. It was a great place for dinner and was very, very cheap and, to make things even better, they had a tiny dance floor inside that we had taken advantage of on several occasions. About a year or so ago, Martha, who owned Carnivore, decided to close it down and build a new establishment called Golden Sparrow, which still serves the same amazing grilled chicken, but is much larger and “classier,” which clearly needs to be qualified to a degree as we are speaking of Karatu. What has really changed, though, is the tiny dance floor, which at Carnivore was more of an afterthought, as it has been transformed into a small nightclub with a much-improved dance floor, a DJ that takes requests, and a full bar that is there to serve. Though we have always maintained a definite air of civility in relation to the Sparrow, it has also been said from time to time, “what happens at the Sparrow, stays at the Sparrow.” 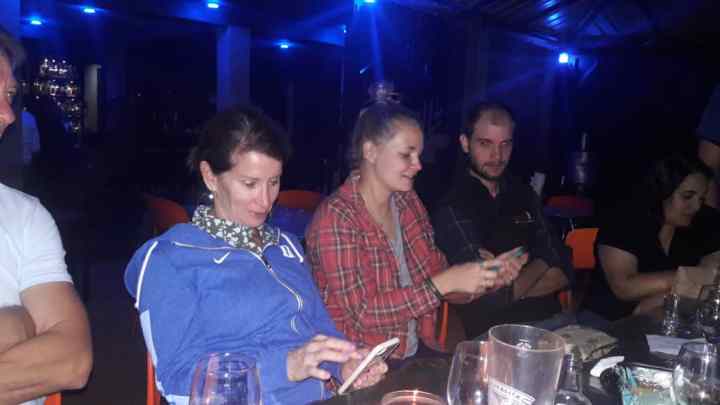 Monica and Kat playing with their cell phones

The first group to experience the Sparrow was Jamie Podell, Chris Perrone and Nan Lin, though I will divulge that not all of them decided to participate in the nightclub action and I will leave it up to you to figure out who did and who didn’t. The next group in October of last year, Neena Cherayil, Whitely Aamodt and Sara Fridinger had absolutely no qualms, as you may have already guessed, and the last group equally so. The Sparrow has now become more of a tradition for us, along with our meals at Gibb’s Farm, and to miss it for me was something significant as I so enjoy celebrating with the residents who work so hard at what they do and deserve the time to let off some steam, all within reason, of course. Though the “adults” did come home a bit earlier this night, the remainder of the group made it home safely as I had no doubt that they would. Besides, now that Lindsay is an entire year older, there was little question in my mind that she would act accordingly (please read the sarcasm in that comment).

Kathrine (FAME social media coordinator), Anne, Abdulhamid, Peter, Amisha, John and Hannah cramming into a selfie (kind of reminds me of how many people you can fit in a telephone booth)