It was day three of our mobile clinic week and we would be heading off to Kambi ya Simba, or Lion Camp, today. It is in the Mbulumbulu region of Karatu District that sits between the Ngorongoro Highlands and the escarpment dropping into the Rift Valley below. The land is very fertile with the soil washing down from the Highlands and there are farms the entire way. As you drive further and further along this plateau, though, it becomes narrower and narrower as you reach the end of the road at Lostete, where the steep slopes meet the escarpment. It is a long narrow triangle of land that is some of the most beautiful scenery that you can find anywhere in the world.

Kambi ya Simba is about half-way to Lostete, so today’s drive will be about 45 minutes along a fairly rough and bumpy road (especially according Neena, who was sitting in the back and bouncy seat of the vehicle) that is decent in the dry season and becomes a slip and slide immediately in any rain. I have become hopelessly stuck on this road in the past so, for the better part of valor, I have been willing to have one of the drivers from FAME come with us in the event of a downpour or a breakdown as there is often no cell service out here. As many who know me, I’m rarely a passenger in the States, but here in Tanzania I have learned to tolerate it.

Selina (left) and Angel sitting outside of our exam rooms

At morning report this morning, we heard of a young Maasai boy who came in last night with a story that he had gotten into a fight with another boy a week or so ago and now appeared to have tetanus. It was later found to be a bit more involved (as is often the case as you don’t always get the full story the first time around) and he had apparently had some abdominal symptoms at which point his family had taken him to a dispensary, but he hadn’t improved. They then took him to a local healer who performed a traditional procedure by making incisions over his abdomen and placing crushed tree root into the wounds. It was quite likely that this was the source of the tetanus inoculation and it had nothing to do at all with the fight that had occurred.

The young Maasai boy with tetanus

We all went in to see the boy after morning report as it isn’t often that you get to see a patient with tetanus. He was lying in bed with his back completely arched in an opisthotonic manner quite classic for this condition among others and all of his muscles were in complete spasm. He was moaning in discomfort even though they had given him diazepam and chlorpromazine, as it was clear that he would need more of the medicine to make him comfortable. The only treatment for this condition is really to give tetanus immune globulin and symptomatic medications with muscle relaxants and sedation and to prevent complications. Regardless of what you do, it typically takes a month of more for the condition to abate as you have to develop new nerve endings due to the toxin. Respiratory function can also be compromised so the patient needs to be monitored quite closely.

Neena and Baraka evaluating a patient

The patient’s urine was also very dark and his sodium level was also quite high so we were worried about rhabdomyolysis, or breakdown of his muscle from the severe spasms he was having, which could cause significant kidney damage. We made recommendations for him to be well hydrated, but not to drop his sodium to quickly, which could also create another major neurologic problem for him. At that point, we left for mobile clinic in Kambi ya Simba and planned to see him when we returned late in the day.

When we travel to Mbulumbulu, there are no services there such a drinking water, food or fuel, so we have to leave with a full tank, water and, most importantly for me (those who know me know how serious I take lunch), food for lunch. We usually grab some Tanzania snack food, mindazi, vitumbua and samosas, before we leave town along with some drinks, such as Fanta Passion or Stoney Tangaweezi. Finally stocked up with lunch, we were on our way. The day was lovely and the drive, although quite dusty and bumpy, was again through some of the most beautiful scenery one can imagine. 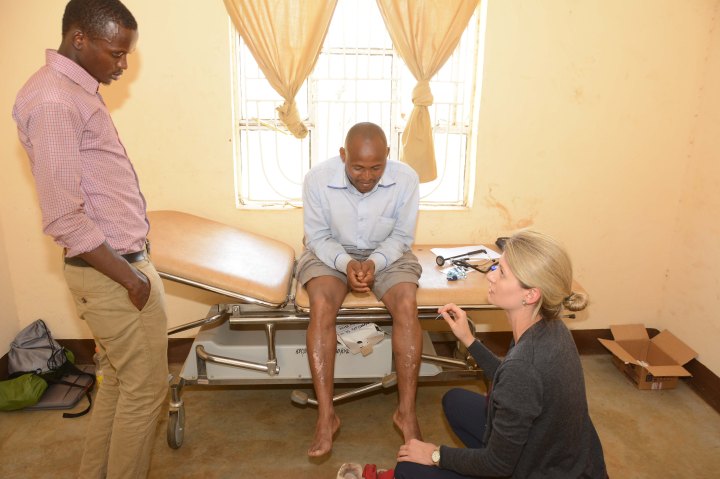 I have been traveling to Kambi ya Simba for mobile clinic since 2011, when I first went there with Paula Gremley and Amiri Mwinjuma, who were two individuals that worked with FAME on the bigger mobile clinics to Lake Eyasi in the past. It was their original idea to bring me there for the neurology mobile clinics and I have carried on the work over the last several years. We originally were doing two days each at Kambi ya Simba and Upper Kitete, but with the addition of Qaru and now doing RVCV on our own, we have reduced all the mobile clinics to a single day at each site. 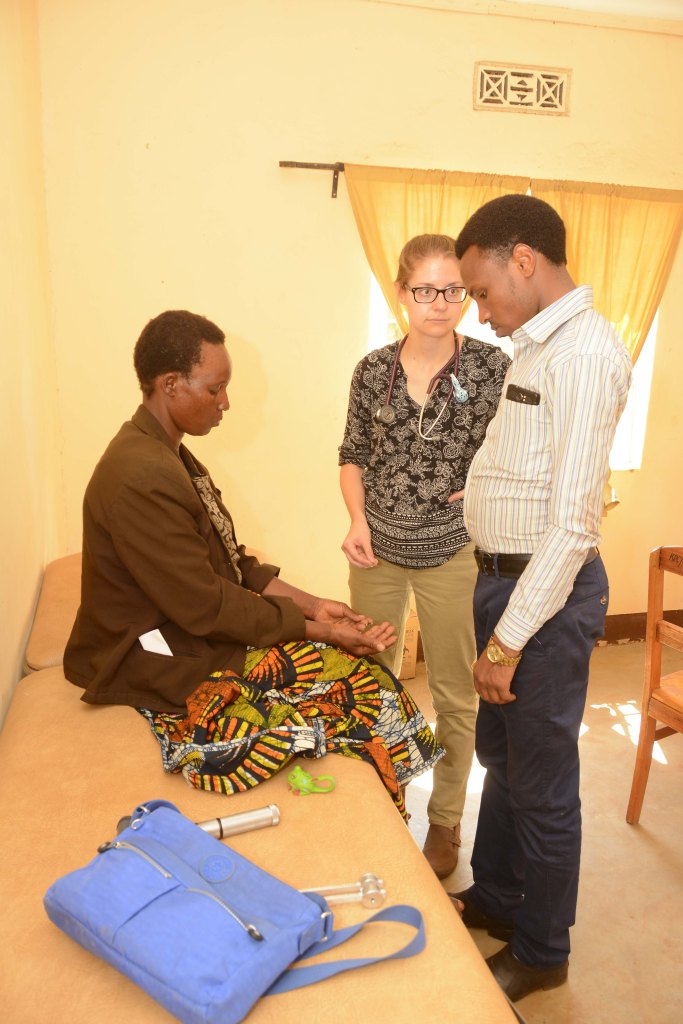 Sara working on the neurologic examination with Dr. Jacob

The volume at Kambi ya Simba was adequate, but not overwhelming. Unfortunately, I don’t believe we had any children for Sara to see today, but she worked with Dr. Jacob, a new clinical officer, and instructed him on the neurologic examination and taking a good neurologic history. Neena and Whitley worked together which meant that they alternated seeing patients. Baraka translated for them and things went well. We worked through the patients, taking a short time out for lunch and we’re on our way home at a decent time considering the 45-minute drive back to Karatu.

Wednesday nights have become a social night in Karatu for all the expats, mostly volunteers, working anywhere in the vicinity and it was once again a rather large turnout. We had eaten our dinner at home beforehand, so only went to see everyone, have a drink and head home at a very decent time. Whitley and Neena were doing an add-on educational lecture in the morning at 7:30am so we couldn’t really stay out too late. Being able to share similar experiences with everyone else in town is a good thing, I think, as it has become a larger community over the last several years and everyone has a fine sense of purpose.