Tuesdays are the day for educational talks and every time we’re here, the residents will give talks that the doctors have an interest hearing. Dr. Msuya is the educational coordinator and one of the topics he requested this trip was the pediatric neurology examination which was great since we had Sara along with us to do the honors on this one. The talk is done before morning report at 7:30am and usually attended by all of the clinical officers, assistant medical officers (AMOs) and the MDs. Occasionally, there are also some of the more advanced nurses that come to the lectures which is great, but we’ve also done these talks at various times for the nurses as well. 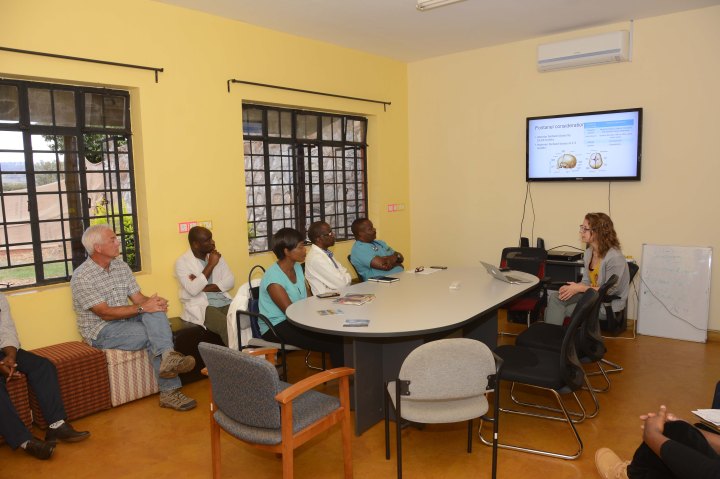 Sara giving her lecture on the pediatric neurologic examination

After the talk, we had morning report and learned of an inpatient consult for a young baby with what sounded like infantile spasms, an epileptic disorder that is most often treated with medications other than the typical AEDs. Sara broke off to see the consult after report while Neena and Whitley accompanied me to the front area where we hold our neuro clinics only to encounter a large mob of patients far larger than what we had yesterday. It appeared that word of our clinic had spread much further and faster than we had anticipated and we were now seeing increasing numbers of patients from the day prior which had really never happened to us before. 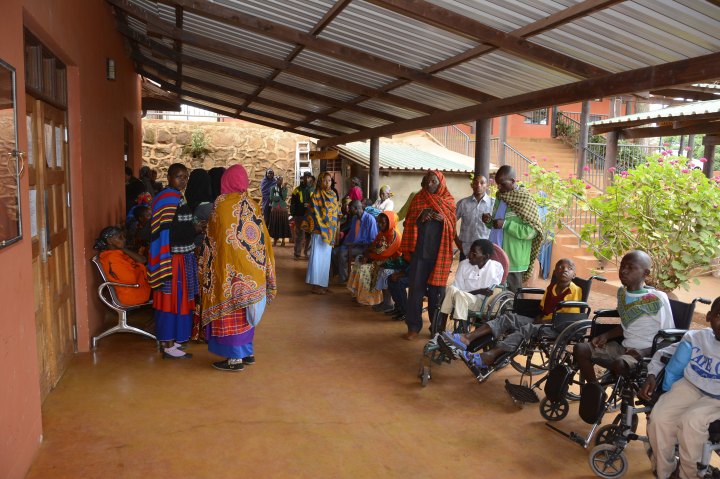 Our mob of patients on Tuesday morning 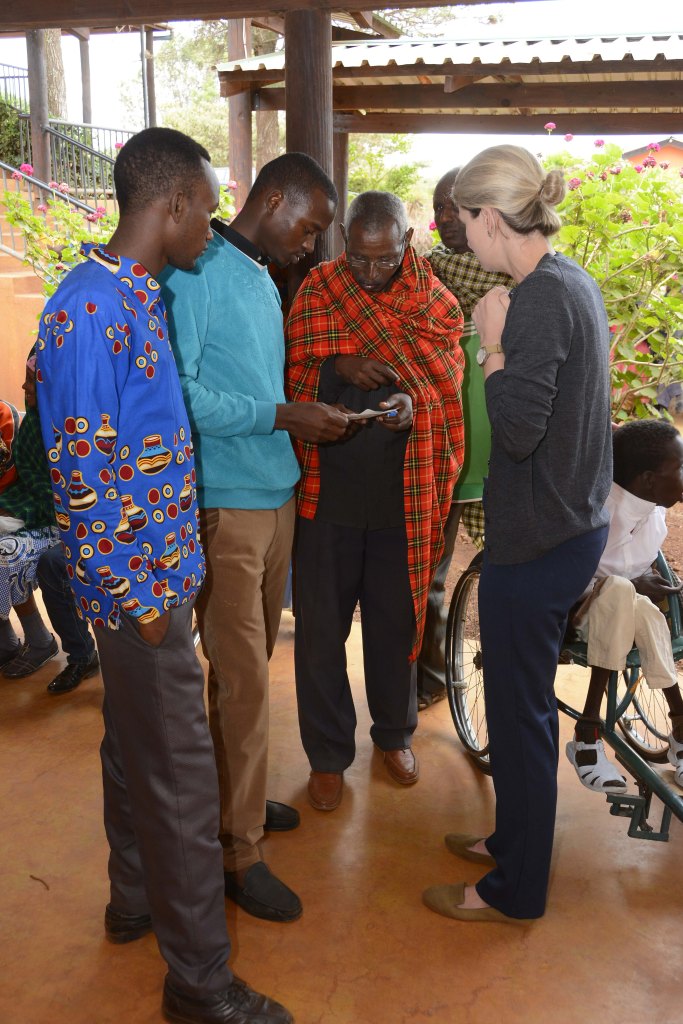 Whitley discussing things with Emanuel, Baraka and a patient 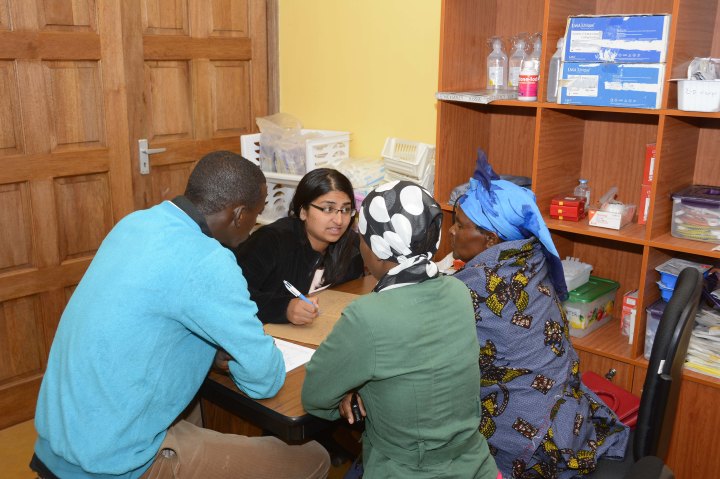 In addition, to the regular patients coming to see us for neurology evaluations, we had a host of young boys in wheelchairs lined up to see us that had been brought by Ståle, the Norwegian gentleman I’ve spoken about before who runs an orphanage in Mto wa Mbu and is incredibly generous. He runs his non-profit with personal funds and donations that are fairly meager considering all of the amazing work he does with these children. He is the one who took in Bahati, the young girl that ended up having a very treatable skin condition when all had suspected a more permanent and likely fatal condition. Her family had abandoned her long ago so that was not an option for to return to them after she had been treated successfully. She’s now a very bright and lovely young girl with the world ahead of her. The other children that Ståle has brought today, unfortunately, do not have quite the same bright future as they are primarily a group of neuromuscular boys that are slowly loosing there ability to ambulate so have all been brought with their wheelchairs today.

Ståle’s group of young men. The Maasai boy on the left is the one Neena admitted today

The younger of the two Duchenne’s brothers with Neena, Baraka and Ståle

Two are brothers that I’ve been following for several years. The younger brother has recently lost his ability to walk while the older brother hasn’t walked in several years. Their personalities couldn’t have been more different as the older brother was very angry and uninterested in anything that we might have to offer , which isn’t very much and so not surprising, while the younger brother has been noticeably less affected by the whole process to this point. They have Duchenne’s muscular dystrophy most likely, though we are unable to check any tests here including a simple CPK blood test, let alone an EMG or a genetic test. The boys have been on steroids before, but as they are no longer ambulating it is less likely to be helpful at this point and having them on steroids in East Africa with all its unknowns isn’t exactly appealing if there is no real benefit.

The older Duchenne’s brother with Neena, Baraka and Ståle.

Neena also go to see a young man who I had first seen several years ago with Payal Patel and who we thought had most likely had polio in the past, but on today’s examination he seems to be progressing which would mean his diagnosis isn’t really as secure as we had thought. It will mean watching him more closely, but there is still really nothing to offer him other than supportive care. We don’t have the tests here to make the definite or at least likely diagnosis which is going to have to be good enough in this situation. 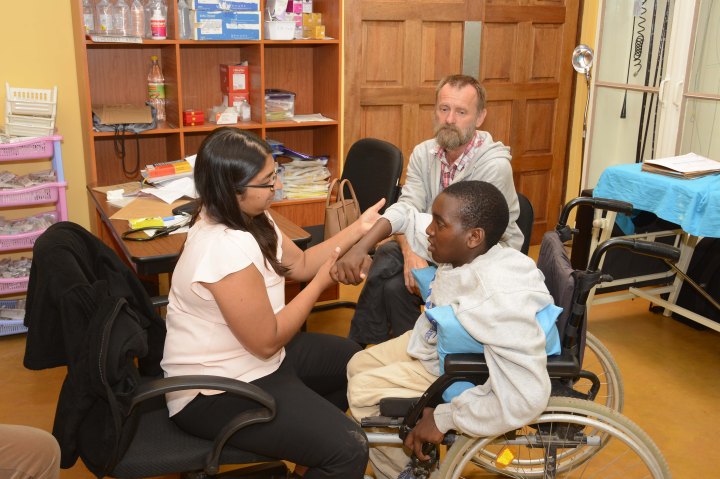 Neena evaluating a young boy with a neuromuscular disorder

Neena’s final neuromuscular child is one who I know rather well, having diagnosed him with either Duchenne’s or Becker’s muscular dystrophy several years ago when I had arrived one trip and he had been kept over in the ward for me to see. They had told me that he had bilateral lower extremity weakness, but when I had examined him it was clear to me that he had a myopathy and most likely a muscular dystrophy. I remember so clearly speaking with his mother who had remained so stoic and emotionless as I told her the prognosis for her son who at the time had only recently been affected. Shortly after our conversation, though, I found her silently sobbing in the room next door, grieving over her son who would never grow up to be a Maasai warrior in the tradition of their people. It was rare to see a Maasai express this type of emotion, though it was also so natural and expected. I don’t recall that it seemed she felt in any way uncomfortable or that she had tried to hide her outpouring at that moment. What I do know, though, is that I had a much better understanding of the struggles of the people here and that it was an honor for me to have been allowed to share in that moment with her.

Neena and Baraka examining a patient

Now here in clinic, several years later, her son was clearly struggling and thankfully they had someone like Neena caring for them. He was totally wasted now with almost no muscle on his body and unable to care for himself. He was breathing rapidly and clearly had an aspiration pneumonia that could likely be the complication that would end his life. Recognizing what he needed, Neena organized his admission to the ward just to hydrate him and give him some antibiotics to cover the likely infection he had along with some medications to make him breath easier. This wasn’t something done to extend his life, but rather to make him more comfortable in what must obviously be a terrible existence in the little time he has left. It was heartbreaking to see him, but also reaffirming in being able to provide the small amount of comfort to him that she did. It is always a struggle to decide whether to put someone in the hospital like this as they may not make it out, but she made the right choice as it was clearly beneficial for him as he was able to leave two days later in a relatively better condition.

Dr. Ken evaluating our young girl who is post-ictal

Sara’s introduction to clinic this day would be with a young girl having a seizure on the bench right outside our clinic door. She was carried in poorly responsive and post-ictal to the examination table and laid there slowly regaining consciousness as Sara gathered her history from her mother. Dr. Ken worked with us again today and he was assisting her in examining the patient who needed some adjustment to her anticonvulsant regimen. We were again working with three clinical teams given the volume of patients and so had a makeshift examination room in the hallway between the night office and the emergency room. Seeing patients in this setting reminds me often of the clinics I did in Southwest Virginia during my residency when we would see patients in whatever facility we could find. It would often be a school or a community building where we’d use the laundry room or whatever space was available to do what we needed to do. I have such fond memories of these incredible of these incredible teaching experiences when I would spend the three days with such legends as Fritz Dreifuss, who was perhaps the greatest mentor of them all, and there were many. 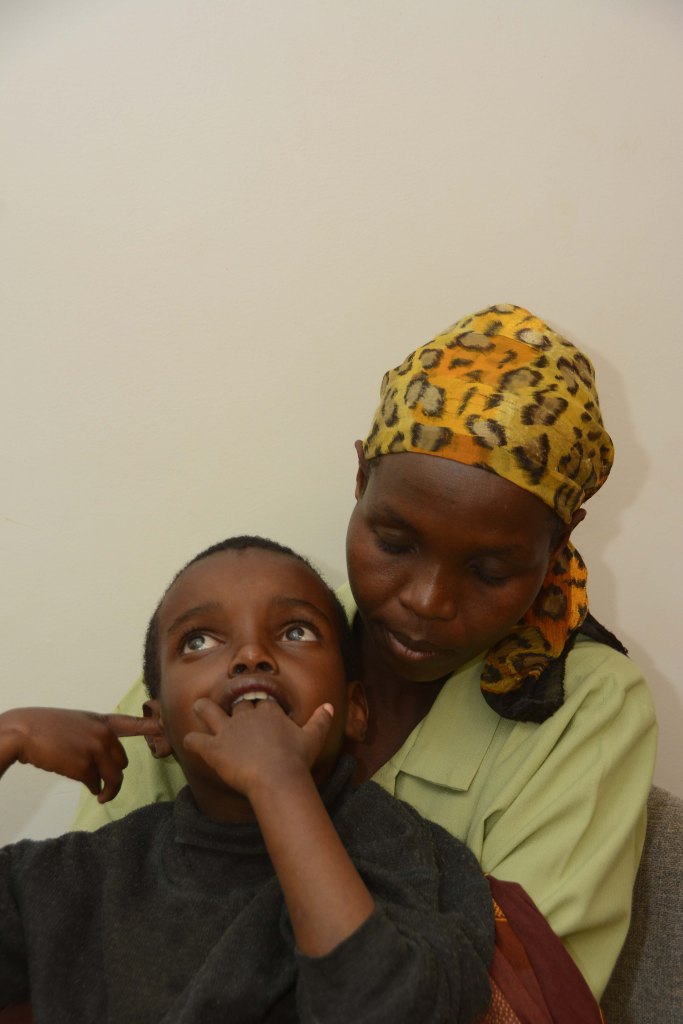 A young child with seizures and question of autism spectrum disorder 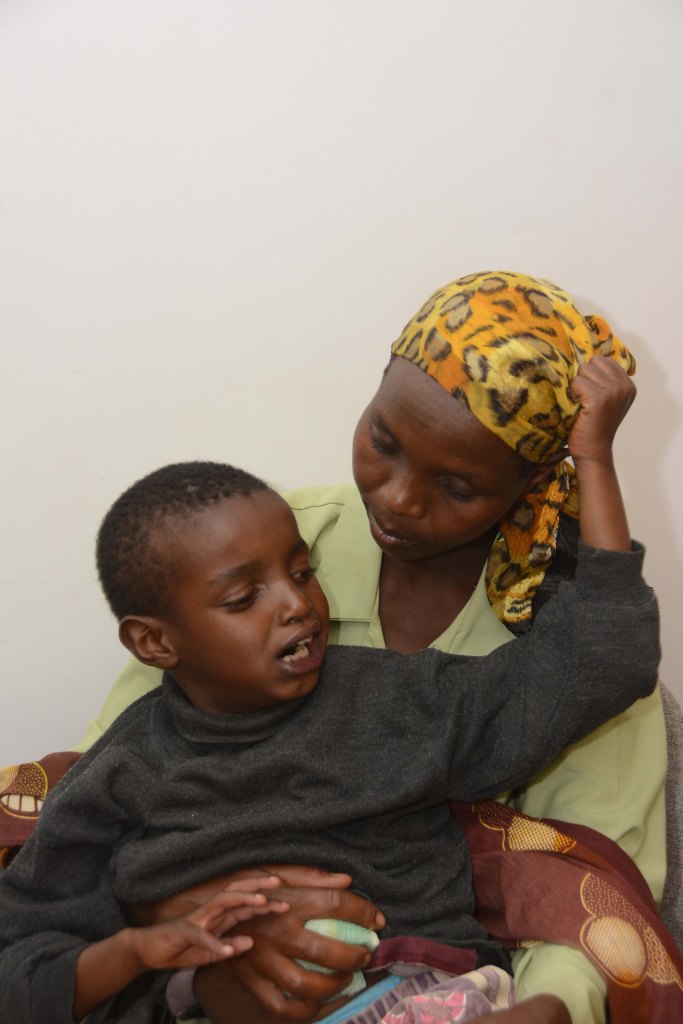 A young child with seizures and question of autism spectrum disorder

We had scheduled dinner tonight with Daniel Tewa and his family and I am always so excited to bring my residents to meet him. He is such an amazing individual that it is always an experience to go to his home and hear the stories of Tanzania before there was ever a country with its name. We sat outside his home among the eucalyptus trees in the center of his farm discussing world politics, US politics, geography and the history of this country that was created with so little and is still a work in progress. When we think that we’re nearing our 250th anniversary and there are just beyond their 50th, it all becomes so much clearer. There were only 21 college graduates in the country when it gained it’s independence in 1961, only 11 of whom were African. To successfully develop a country with such limited resources to start, it is not surprising that it has far to go. Daniel showed everyone his underground Iraqw house that he built in 1992 as they had been banned since 1974 to bring everyone into the villages to build an infrastructure in the country at the expense of their culture. The house is now a historic structure that many students from all over come to study and experience. The Iraqw and the Maasai were also constantly at war with each other until 1986 when a treaty was finally signed to end the feud over cattle, but Daniel still has the weapons in spears, shields and clubs that were used to defend themselves in the not too distant times. They are used now only for demonstration purposes. 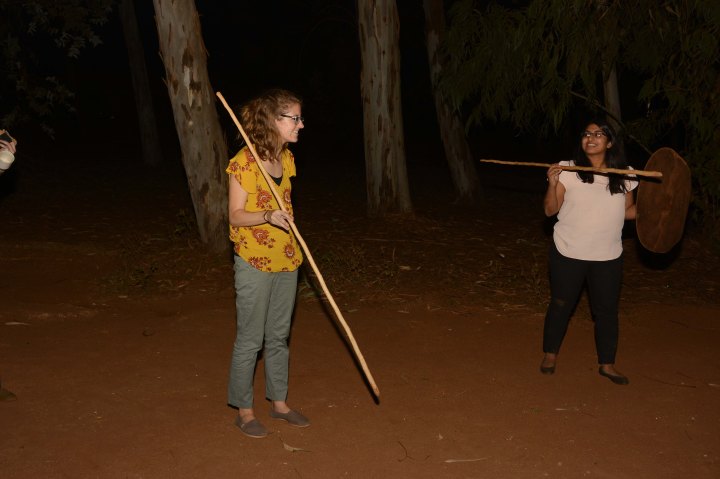 Preparing to throw their spears

Daniel showed off his talent at throwing a spear and next let Glen have a go at it. Daniel’s spear went clear to the road and a young woman walking by kindly pitched it back in our direction. Glen’s throw went only as far as where the woman threw the other back which was about halfway. Next up were Neena, Whitley and Sara, who all decided to take a shot in unison. I’ll leave it up to your imagination as to how far their throws went and which threw the furthest.

We walked up the dirt road to Isabella’s home, Daniel’s oldest of twelve children, for dinner and were greeted by Renata, Daniel’s granddaughter who I have known since 2010 and is now 13-years-old. She loves science and I am hopeful that she want to consider medicine as she goes forward. She has helped us several times at FAME interpreting and I think she’ll have a real knack for it. They are one of my families here in Tanzania, families that also include the Tembas in Arusha and FAME here in Karatu. They are among the reasons I continue to come back year after year. They and the residents I bring to share in the joy of meeting, caring for and teaching such lovely people who populate this wonderful country.