Everyone is up bright and early for a breakfast of granola and fruit brought from Arusha as it is impossible to find any decent cereal here in Karatu – the off-brand corn flakes just do not cut it, nor do they hold up in milk meaning it’s a soggy bowl of corn mush by the time you eat it which is generally within seconds. Krazy Kat (KK for short), the orange tabby who is the only remaining member of his family here at the volunteer houses after his mother and grandmother quite likely fell prey to the hyenas often frequenting the perimeter of the property, sits at the window loudly meowing for any potential scraps or a cereal bowl with its remaining milk. He is in heaven lapping up the leftovers. 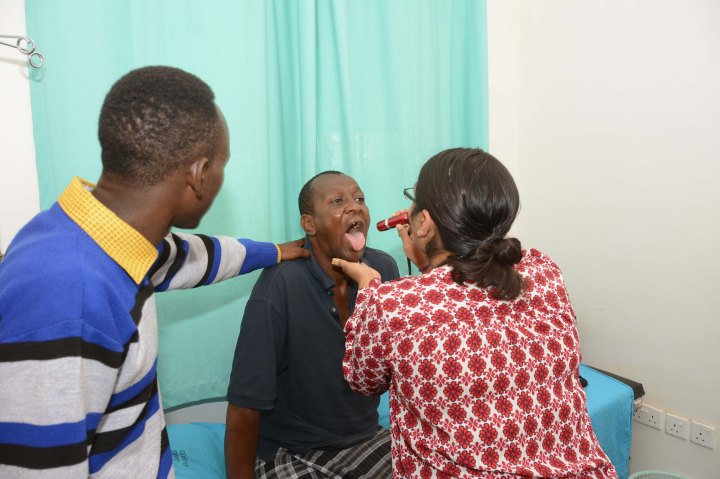 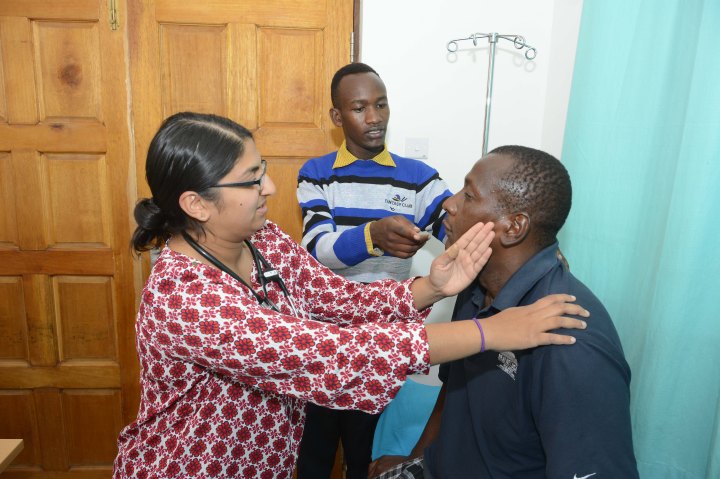 It’s off to clinic for morning report at 8am where we hear about any new patients that arrived overnight as well as the patients on the inpatient ward and the maternity ward. The clinical officers and doctors discuss the cases in a very collegial, though sometimes boisterous fashion that can be hard for us to follow at times. It is done in English thankfully, though the accents can at times be difficult when several are talking at the same time. We mostly listen for anything that sounds halfway neurological and our ears immediately perk up at the appropriate time. This morning there is a gentleman who arrived psychotic with a history of heavy alcohol abuse and the question is whether we’re dealing with alcohol withdrawal or with Wernicke encephalopathy (thiamine deficiency). The other patient we’re asked to see is on the other end of the spectrum. He is a one-day-old baby whose mother nearly died yesterday after she was unable to deliver the baby due to massive hydrocephalus requiring an emergency C-section.

Sara evaluating her young patient with the spinal tumor 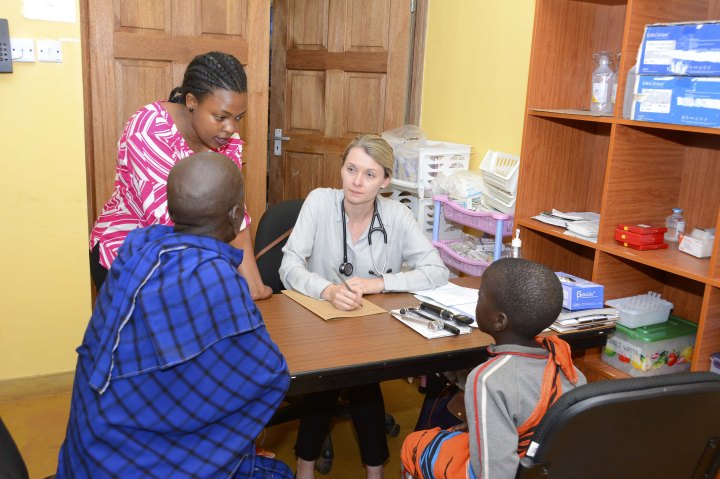 Report lasted unusually long and by the time we get to clinic, there is already a small crowd building. Today was an unadvertised day as we were hoping to begin with perhaps lower numbers so everyone could get used to what’s expected, but apparently some have discovered our presence and have arrived quite early. We have two translators from Rift Valley Children’s Village working with us for the first time today – Emmanuel and Baraka – who will each work with a separate team as we’re seeing patients. As we’ve done in the past, we occupy the night doctor’s office next to the emergency room and the emergency room itself where we’ll have two teams seeing patients with the third resident free to see urgent consults in the wards or other patients in the outpatient clinic seen by one of the other clinicians and now needing our services. This system has worked well and did again today and thankfully the numbers were down a bit as we had planned it. 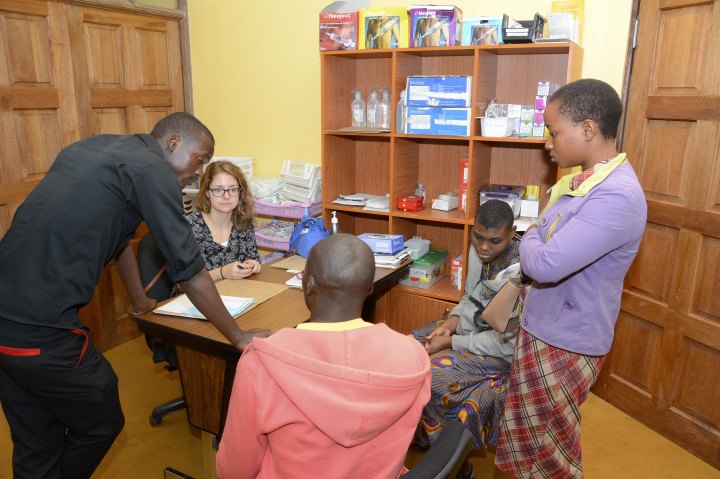 Sara evaluating her patient with the help of Baraka

It was nice that the numbers were down a bit for several reasons. First, it gave Sara, Whitley and Neena some time to familiarize themselves with the system here – translators, script writing, medications, ordering labs, how to chart, etc. Secondly, the patients we saw today were some of the more complex ones that were all grouped together and we saw none of the simpler cases like back pain, neuropathy or headache. Neena’s first case was 59 year-old woman with complaints of memory loss who had been ordered a CT scan (which she had planned on getting that morning and had a signed script by Dr. Frank for the scan). Her scan was normal as was her examination and it was most likely that her depression was the cause of her memory loss which she didn’t seem to be much too happy about. She had only been on her increased dose of fluoxetine for about a month so we didn’t want to increase it just yet and decided to have her return again in the next month or two to see how she was doing.

Neena’s second case, though, was far more interesting and was a previously diagnosed lumbar Pott’s disease (Tuberculosis of the spine) that had been recently started on therapy and was actually improving. He had had pretty significant deficits in his lower extremities that were much better than they had been based on the history given to us by the patient and a friend. He had been to India for his treatment and imaging and had not required surgery. We had really little additional treatment to offer him other than reassurance that he would likely continue to improve based on his progress so far. Thankfully, he was walking now and would probably do very well. 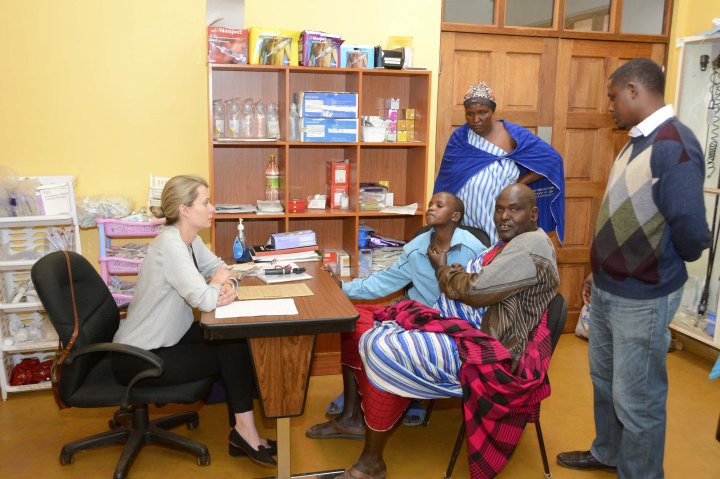 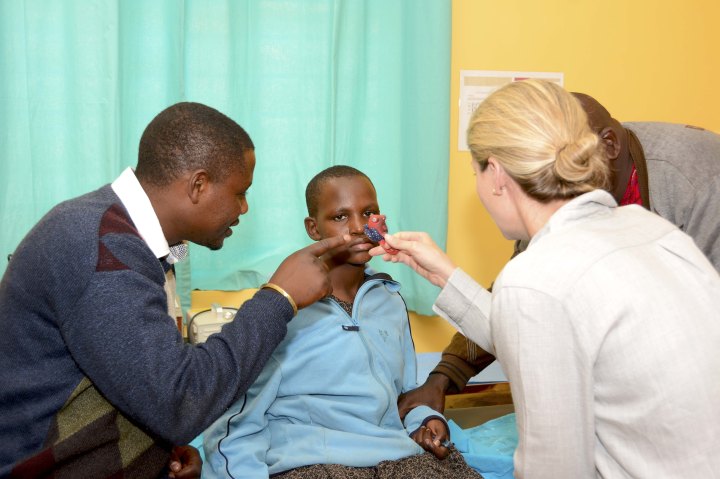 One of Sara’s first cases had a not so optimistic prognosis unfortunately. He was a 19-year-old young man who had been diagnosed with a spinal cord tumor two years earlier involving his mid thoracic region down to his upper lumbar. He had brought his imaging, but only the postop films which didn’t do us as much good and he had total loss of motor activity in his legs and was having to straight cath himself throughout the day as he had no bladder function. The family had brought him to us with the hope that we would tell him he would walk again, but that was not to be the case. His surgery had been done in Dar es Salaam and we didn’t have the pathology nor did they know what it was. He didn’t undergo radiation or chemotherapy so it was probably a more benign process, but either way he would be very unlikely to regain any function. It didn’t seem like the family had heard that before and even though we often feel as though people hear what they want to hear, we couldn’t help feeling that they hadn’t actually been told this by any of their doctors.

Whitley’s first case of the day was a young Maasai boy of about 8 years of age who had been having frequent seizures since he was an infant and had never seen a doctor for them before. It’s difficult to even ask the question of why he had never seen a doctor before without imposing some judgment along the way, but she managed to do so in a very thoughtful and sensitive way that it was very unlikely to have raised any sense of concern by the father. We put the boy on anti-seizure medications that will have a good chance of working since he has never been on anything before.

Sara evaluating her stroke patient on a stretcher

Sara, our pediatric neurologist, evaluated an 80-year-old woman who had suffered a stroke a month ago and had a dense left hemiplegia. She had undergone a CT scan of the brain at FAME the week prior to our arriving and brought the films for us to see when her family brought her in on a stretcher. The scan showed a fair amount of hemorrhage from what looked like hemorrhagic conversion of an ischemic stroke. No stroke evaluation had been done where she was hospitalized at Karatu Lutheran Hospital and Sara noted that her heart rhythm was irregular so we sent her off for an EKG along with some other labs and, of course, the EKG returned showing she was in atrial fibrillation. This wouldn’t have changed anything, but she will eventually need to be on blood thinners to prevent her from having another stroke.

Whitley’s day was made when a gentleman showed up who we had previously diagnosed with Parkinson’s disease and was on levodopa-carbidopa with a fairly dramatic resting tremor that involved his entire body. He came in with complaints that his medication wasn’t working well and after a careful history by Whitley, it was clear that his dosing was spread too far apart and needed to be taken more frequently. He had taken his medication a bit before he came to see us and during the visit it was like a switch had been flipped and his tremors were almost all but completely resolved as the levodopa kicked in. He was like a different man. They asked if we had any other medications to treat him with or if the levodopa-carbidopa was the only one at which point we told him that it was the only one available in Tanzania. Dopamine agonists, though useful, would be out of the question here due to cost and it’s unclear whether they are even available.

Sara and a young patient

Well after lunch, both Neena and Sara left to do consults in the wards that had been waiting since the morning. Neena’s patient was an alcoholic who had stopped drinking after falling a week or so prior to being admitted and had become psychotic as he had refrained from alcohol after his fall. He turned out to be a case of alcohol withdrawal and not a Wernicke encephalopathy as we had feared. He didn’t require medications to prevent any worsening and was discharged home no worse for the wear. 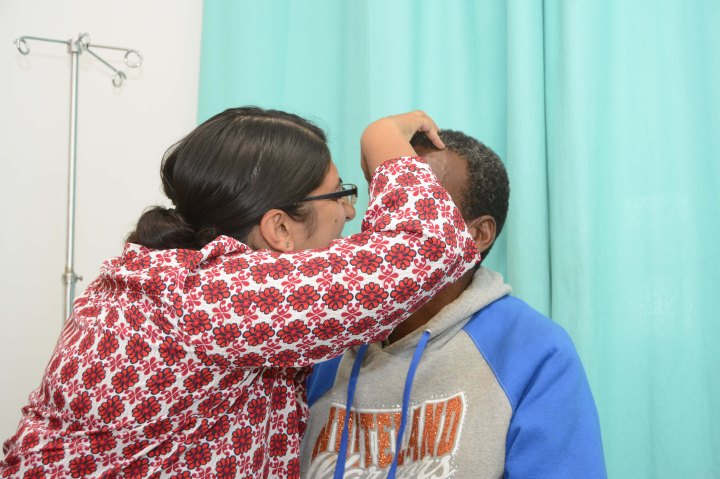 Sara’s consult was, unfortunately, not so simple. This baby’s mother had presented in labor and as she was not progressing, an ultrasound was performed. Dr. Gabriel, who I have worked with for many years at FAME, performed the ultrasound and had originally thought he was looking at a large cyst, but soon realized it was the infant’s head with massive hydrocephalus that had not chance of being delivered vaginally. Mom had been pushing for so long that she had almost ruptured her uterus and during her C-section had lost large amounts of blood and if not for the heroic efforts of the doctors would have died. The baby was doing well with apgar scores of 5 and 6, a good suck and a good cry. The baby clearly needed to be shunted to reduce the hydrocephalus, but mom was too unstable to transfer to Arusha. Sara’s evaluation was as expected given the baby’s situation. He was doing well for the moment, but his head was huge with splaying of all of his cranial sutures and a head circumference equal to an average adult. We informed Dr. Gabriel that the baby should be shunted as soon as possible and we agreed that we would contact Arusha Lutheran Medical Center that night or the following morning to transfer the mother and baby to cared for there. 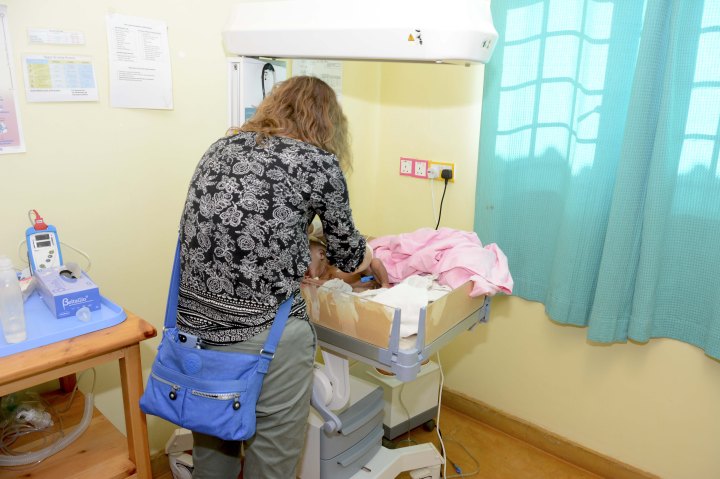 Things are never as simple as they seem, though, and we found out the following day that the father of the baby lived in a very remote area of the Rift Valley and could not be to FAME for another two days meaning that the baby would remain at FAME until the father agreed to allow him to be transferred, if, in fact, that would ever happen. Our hope was to save the baby from further disability by delaying the shunt, but in the end, it’s not our call nor should it be.