Our stay here is winding down and it doesn’t seem like it’s been nearly a month here, time flies by so very fast. Today was the day I would be getting our Land Cruiser down to Soja, a good friend of FAME and someone who has done work on the vehicle for me in the past when we’ve had things to fix, which is unfortunately quite often here as they are usually about twenty years old and have several hundred thousand kilometers of very rough roads behind them. This time it was our four-wheel drive that was the problem and which had contributed to our almost being stranded and left for lion prey in the Southern Serengeti. I had planned to run the vehicle down to him, but he had miraculously shown up at FAME late morning to work on one of their Land Rovers so I didn’t have to leave the residents for a brief time as I had planned and prepped them for. I think they were disappointed at not being able to have worked on their own, even if was only going to be for a few minutes. With no transportation for the late afternoon after clinic, we would have to remain on campus which isn’t necessarily a bad thing every once in a while.

Chris and Sokoine evaluating their patient with selective mutism

We had morning report and then rounds, the latter of which I skipped to get things set up for us. Nan came out to let me know that there were two critically ill patients in the ward that needed blood transfusions and that Jamie was a match (O+) for one of them so was going to give a unit of whole blood which meant that she’d be out of commission for at least pat one the morning. He blood donation went fine and she even scored a free Fanta out of it, but it was orange and we really only crave the Fanta Passion which is the very best. More importantly, it was Wednesday, which is mandazi day as I’ve mentioned before, so we made sure that we all accompanied her there early so that she (read we) would get some mindazi and chai masalla before the crowd hit. We were all successful in our task and, most importantly, Jamie, who actually did feel a bit weak-kneed after her blood donation. 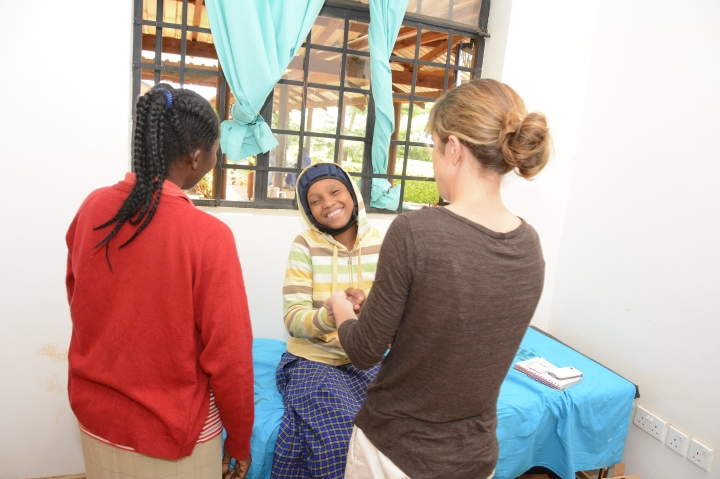 Jamie evaluating her patient with seizures

Chris started his morning with a continuation of his psychiatric practice here at FAME, seeing a young man in his early twenties who had lost his ability to speak after having been verbally abused by his father and then lived on the street for several years unbeknownst to his family. He could understand perfectly well and could also write, but just wouldn’t speak. His neurological examination was completely normal and it was clear that he had selective mutism on a psychiatric basis, but the question was what was his diagnosis which would determine his treatment. We didn’t feel he was schizophrenic as he had never had any agitation or hallucinations the best we could tell and he was clearly very depressed, so it was more than likely that this was PTSD and depression that would respond best to an SSRI antidepressant medication. He was place on fluoxetine (Prozac) and will hopefully improve once it begins to work.

Once Jamie was feeling back to herself, she was able to see one of her follow up patients, a young girl who with epilepsy who was still having episodes despite being on several medications and also seemed to be having cognitive issues on the medications. We had placed her on valproic acid, despite our typical concerns about not using it in women of child-bearing age due to a serious risk of serious fetal malformations, as nothing else had worked. She was clearly better when she saw us this time, both cognitively and in regard to her seizures as she had had none in the two weeks since we had started her on the medication. She’s a tough case and it still isn’t 100% clear as to what is going on, but she seemed to be better and will follow up again in one month.

Chris and Sokoine examining his patient with unilateral sensory symptoms

Frank came by our clinic at around 3pm in the afternoon to show us a picture of a young 16 year-old who had just showed up with a massive enlargement of her right knee that had been present for approximately nine months. It was extremely firm and didn’t look very good as it was most likely a tumor, and probably osteosarcoma. She was admitted to the ward as she was in extreme pain and when Chris examined her, it was also clear that she had no function of her lower leg likely on the basis of either nerve compression or frank destruction from what was very likely cancer. Abbey Owens, the pediatric nurse practitioner who has been here for two weeks and had done pediatric oncology previously, suggested obtaining a chest X-ray to see whether there were any metastatic lesions as this would be a very bad sign.

Unfortunately, it was positive for lesions, most likely metastatic, and after Frank contacted the pediatric oncologist in Dar es Salaam he heard back that there was nothing they had to offer her due to the extent of disease. This would mean palliative care for a 16 year-old who had just walked into the OPD. We later found out, though, that she had been taken to at least two clinics previously, both of whom had recommended that she go to KCMC in Moshi, but that the family had not taken her because of the cost. Had she gone earlier, perhaps she would have been able to at least have received some treatment or perhaps had the leg amputated to possibly have saved her life, though in the end, none of these would have been certainties or have made a difference. The following day, the care team along with the social worker would have a conversation with the family and the patient to convey the news to them that there was no treatment at this point and she would be going home to die.

Clinic finished early for once which meant that we could have run to town for errands of gone somewhere, but we had no vehicle as it was still with Soja and we wouldn’t be getting it back until the follow day…hopefully. We went back to the house early as everyone had work to catch up on (for me, this blog) and there were plans for a movie night. After dinner, Jamie and Nan settled in on the couch with some popcorn and watched “Taxi Driver,” the second title of their Robert DeNiro film fest after having watched “Deer Hunter” last week. They are truly gluttons for punishment. Chris watched the movie off and on while I sat at the table and listened to it while posting blogs. “You lookin’ at Me?” I got such a kick out of hearing this classic line again.

We had one day of clinic left and one night after tonight of staying in our wonderful house here, The Raynes House, that is so comfortable and warm and was made possible by the generosity of the Raynes Family, who knew how important the work is that we do here and how important FAME is to the people of Northern Tanzania. It is with the support of many that we are able to provide this care.