I think we were all a bit tired from the prior night’s late patient in the ward and combined with the fact that we had 7:30am teaching this morning, we were dragging just a bit. Dr. Elle was giving the morning lecture on chest trauma, which really dealt with the various types of pneumothorax and hemothrorax and how to place chest tubes. Not something that I plan to do anytime in my future, but it was interesting and if I were ever called upon to do one, I now feel that I at least know the landmarks and reasons why one should be performed. Thankfully, and more for the patients than me, there are plenty of surgeons surrounding me at HUP as there are here.

Following our teaching session there was morning report, this time by Dr. Kidugu who is on nights for the week. We received report on our young patient from the night before (all good) along with all of the little ones in the ward that Nan is following as part of her general pediatrics clinic which she didn’t know she was going to have until after her arrival, but she’s been such a good sport about it and has really been an amazing asset for FAME during the time we’ve been here. There are quite a few neonates in the ward that have required some involvement from Nan in one sense or another. Nan spent the better part of the morning in the L&D ward with all of the neonates there and I know everyone appreciated her presence. 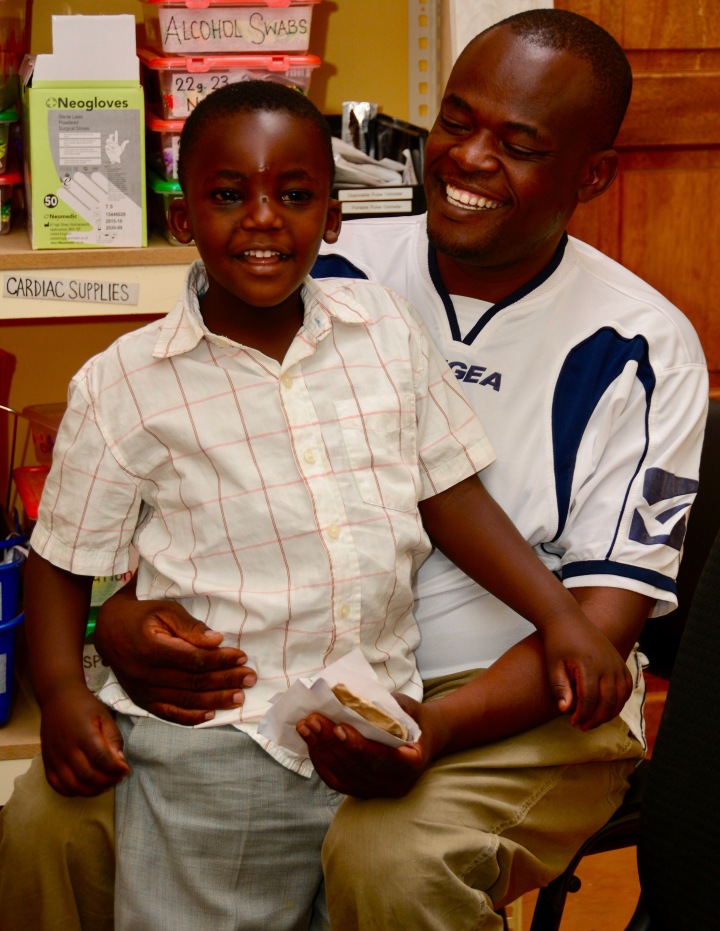 Our ADHD child and his wonderful father

Chris’ first patient of the morning was a young man who was brought by his father and clearly had pretty significant ADHD symptoms in addition to developmental delay and epilepsy. The child was pretty active and quite difficult to tie down during the appointment, though I did my best to occupy him for a bit so Chris could get a good history from the father. We decided to initiate a new medication for him and have him return in two weeks before we leave. Not that stimulants are even available here, but even if they were, we’d probably like to avoid them with the additional concern for seizures. We do have clonidine, though, which is often the first medication tried for ADHD as it is so safe. We decided to discuss it further when they return.

Chris and Cliff evaluating our child with ADHD and seizures

Jamie had two interesting patients in the morning, both of whom she diagnosed non neurologic problems in despite both coming in with neurologic complaints. The first woman was seen for headache, ear pain and a rash over her left shoulder and upper chest, front and back. She also had a history of prior shingles involving the left mid thorax that had healed and scared over. Her main complaint was the neuropathic pain from the more recent herpes zoster outbreak, but the real question was why did she have recurrent zoster at all. With some further questioning, it turned out that she did have some constitutional symptoms that raised our concern significantly regarding the possibility that she was immunocompromised. We sent her off for labs including HIV and syphilis and, sure enough, her HIV was positive and we promptly referred her to one of the government dispensaries where she will receive her medications for free. She was not encephalopathic nor was she toxic appearing so we didn’t feel the need to be more aggressive with her such as doing a lumbar puncture. We were able to prescribe her gabapentin, though, for her neuropathic pain.

The other patient came to see us for headaches which were pretty benign sounding and we decided to treat the patient with amitriptyline (our favorite medication here) I believe, but Jamie thought she had a bit of an enlarged thyroid (a goiter) and, sure enough, her TSH was non existent and she will need treatment for her hyperthyroidism. We sent her across to the general outpatient department where she was further treated. That’s often the way things happen in neurology as many systemic processes manifest themselves as neurologic symptoms so that we need to be ever vigilant to this fact, often thinking outside of the “neurologic box” and making sure we cover all the bases for every patient. 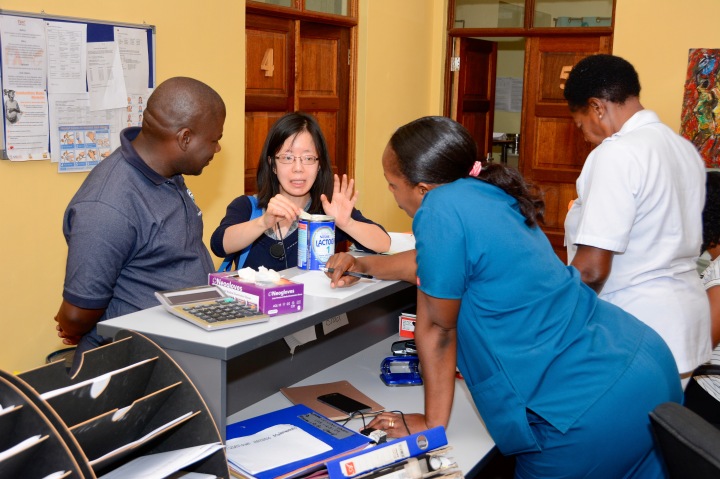 Nan at her finest, giving instructions on mixing formula to a father

Meanwhile, Nan continued in her role as the resident pediatrician here at FAME along with the resident pediatric neurologist. She has been following a number cases of general peds in small neonates that have included both infectious, metabolic and respiratory derangements requiring lots of thought on her part and working with the nurses and doctors here has remained an invaluable asset to FAME. The young girl we had seen the evening before had significantly improved by the morning such that she was walking all around FAME and bossing her parents around. It was decided that she had suffered a symptomatic seizure, her first, in the setting of a fever and so was not started on any medication for seizures, but rather will be followed and she has any further, provoked or unprovoked, she will likely be started on something. 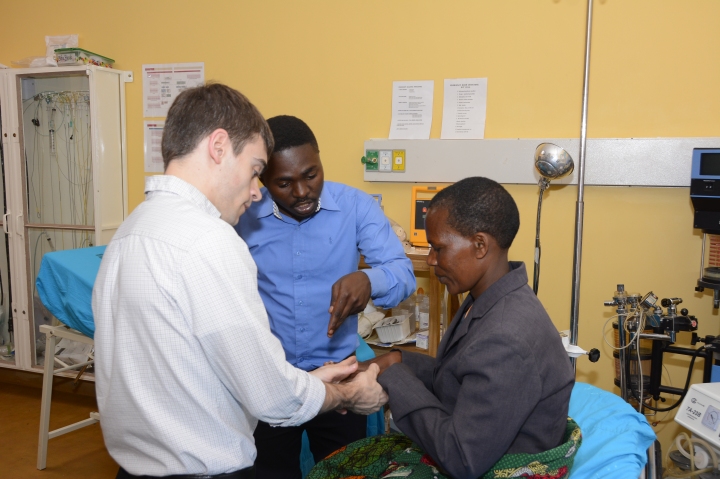 Cliff doing his excellent job as a translator 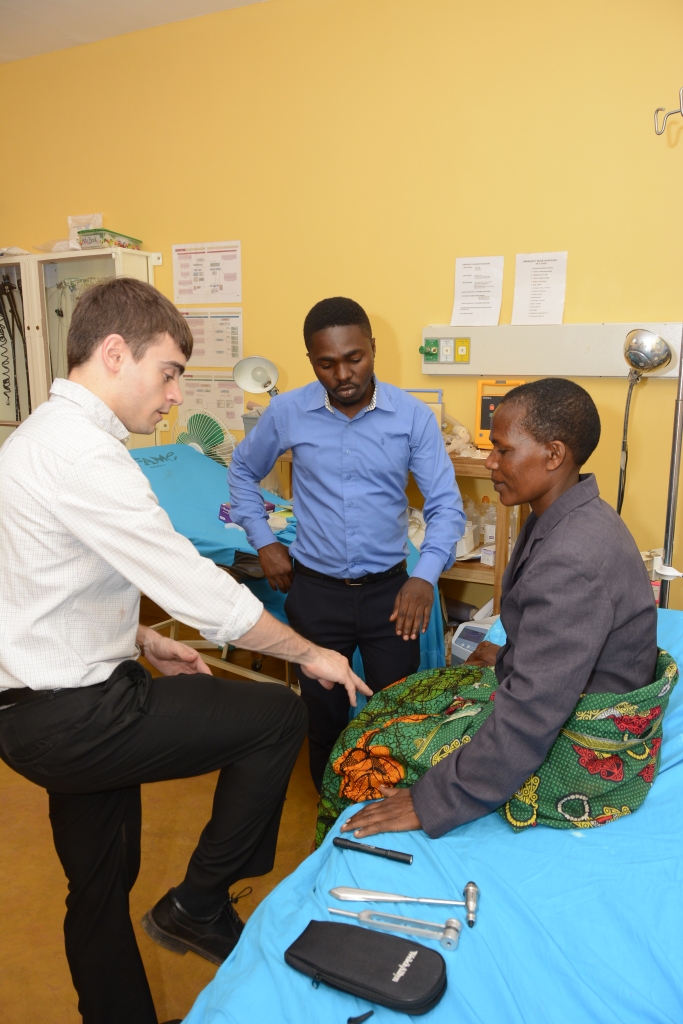 After dinner tonight we all decided to run into town and grab some ice cream bars (no such thing as scooped ice cream in Karatu, though they do have it in Arusha amazingly) and a sim card for the internet-starved residents who were quickly going into withdrawal and I was very worried about any serious reactions they may suffer. We were successful in getting the sim card and the plan loaded for them, but unfortunately, the phone they were going to use for a hotspot didn’t seem to want to cooperate so that they had to suffer one more night “non-internet hell” at the house. I am happy to report, though, that there were no injuries or fatalities suffered by the residents that night and that all survived relatively unscathed. Most importantly, though, Alex was able to troubleshoot the phone the following morning so they wouldn’t have to experience another horrific night of internet-less torture and potential longterm harm. All was now well in the world of technology and the heavens were in balance once again.