For the most part (sorry, Jamie), we all awoke in the new house as sunrise was upon us, refreshed for the first day of clinic here at FAME. We had gone out the night before to Happy TImes, a local pub and gathering place for the many expats here working or volunteering, but had come home early to make sure we had enough rest for the following day. It’s always a bit anxiety provoking to get set up on that first day and this trip was unique in that it was my first with three residents. It’s difficult from a space and manpower standpoint for us to have more than two rooms going at once seeing patients as we typically only have one clinical officer/MD and one interpreter to work with us. Someday, I hope to have our own funding so that we can have a dedicated clinical officer without having to rely on FAME to supply us one for the time that we’re here.

Jamie and Nan evaluating a patient with Dr. Badyana

Regardless, we have Sokoine working with us again, as well as Angel to help with social work and translation. They have both been dedicated and indispensable partners here that have made sure that things have continued to run smoothly, often despite many hurdles and roadblocks. In addition, Alex, our volunteer coordinator, will now be serving as our Neurology Project Administrator, looking at the cost projections for our clinic going forward so that we will know exactly how much fundraising we have to do along the way to keep this thing running. He will look at the numbers of patients we are treating, medications that we’re prescribing and testing that we’re doing on our patients in order to come up with a budget for the month clinic that we run twice a year. That will help quite a bit as we become more organized over time. 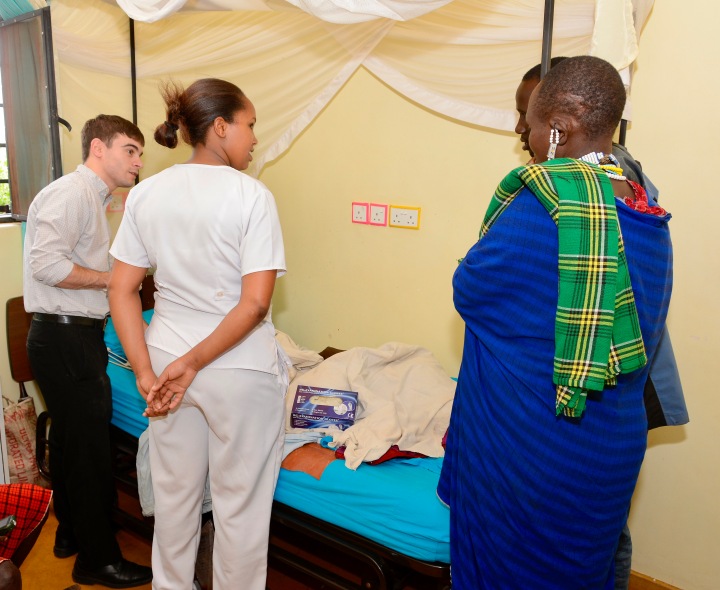 Chris getting the history on the Maasai gentleman with a stroke. His wife is at the foot of the bed 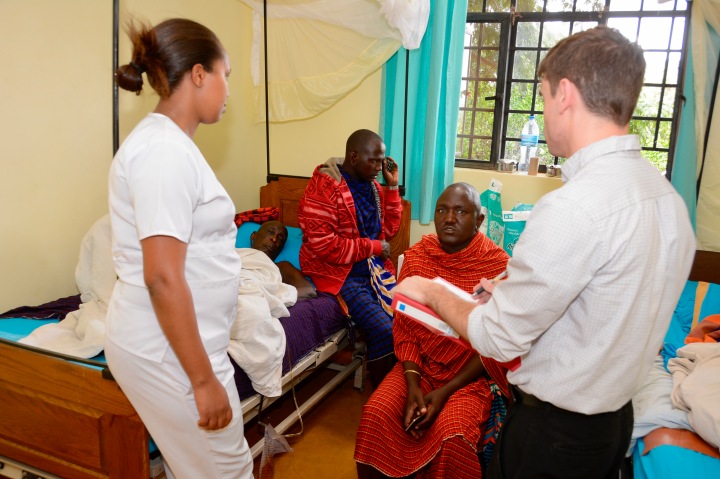 Obtaining a history on the patient with the GI bleed

We did have a bit of work to get started this time. We arrived for rounds at 8am only to find out that they were having an educational conference at 7:30 that we missed. Apparently, neither we nor Alex had been made aware so we never got the word from anyone. That actually gave us a few extra minutes to get set up before patients started arriving as we’re working again in the night doctor’s office and the emergency room that are separate from the main clinic and closer to the hospital ward. We had already been told about a patient in the hospital ward they wanted us to see in consultation and when I sent the three residents to join everyone on rounds, they came up with another patient for us to see as well. My plan was to have two residents work seeing the clinic patients and one resident begin seeing consults in the hospital while I supervised everyone. Handwritten charts and scripts are new to all of them since everything is done on an electronic medical record at home. In reality, though, medicine is medicine and taking a patients history is the same where ever you are, albeit having one and sometimes two interpreters for every patient is a bit of a change.

Sokoine and one of our young patients with their mother 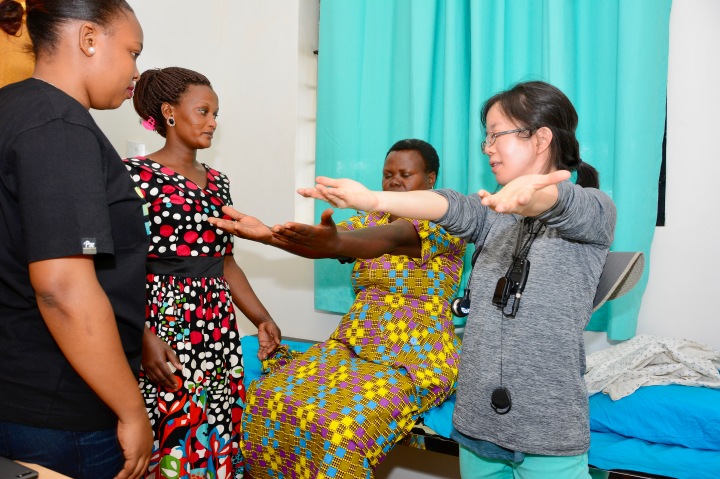 Chris started in the hospital ward seeing patients, both of whom were in the same room and both were elderly Maasai men. Most of the Maasai speak Swahili, but not all and these two men were not very good at it which necessitated having someone who spoke both Maasai and English, or at the very least Maasai and Swahili where we could add the extra translator. We eventually found a nurse for Chris to use as a translator and he was able to begin seeing his patients. With him now started I was able to move to the clinic to see how Nan and Jamie were doing. Nan had started with a pediatric case, an eight year old girl with microcephaly, significant developmental and a spastic hemiparesis delay who had been having two seizures a day since one year of life and had never been treated for the seizures, yet she had been to a rehab center sometime in the past. Her seizures were focal by description meaning that we could use carbamazepine for the child, a medication that is the one of the least expensive and easiest to obtain here which was very fortunate as our medications are somewhat limited. 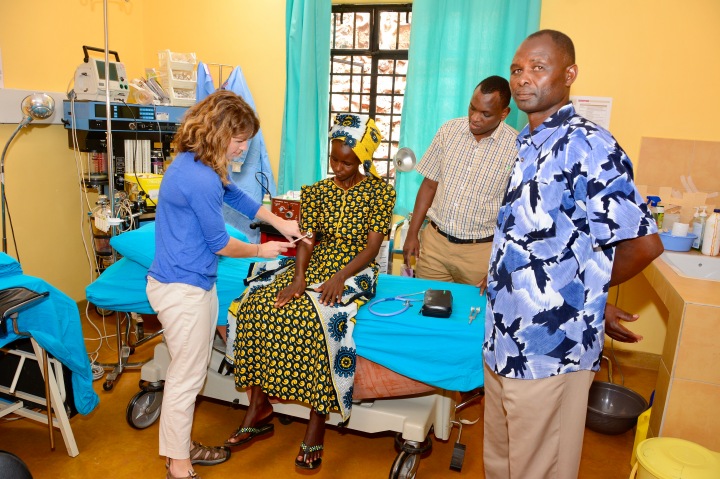 Jamie examining a patient with Badyana and husband looking on

One of Jamie’s early patients included a gentleman with +HIV on retroviral agents and who was complaining of difficulty using his right side and who had had two episodes of probably seizure a month prior to seeing us. He also told us that his CD4 count (the lymphocyte count that is affected in this disease and when low causes patients to be at risk for associated infections or cancers) was very low when last checked a month ago. This was obviously very worrisome for an intracranial process and we recommended that he get a CT scan. The social worker spoke with him about the cost of the study and his ability to pay for it and he decided that he wanted to go forward with it, but said he would come back next week to have it performed. Hopefully, he will return. In the meantime, we decided to place him on carbamazepine to prevent him from having any further seizures before his return to see us.

Chris fared exceptionally well in the hospital ward with his two consults, though there was some difficulty getting the histories from both patients as they spoke primarily Maa (as they were both older Maasai men). One gentleman had come in several days prior with an initial history that had been concerning for Wernicke encephalopathy related to alcohol use, but in the end his confusion was really an aphasia related to a left middle cerebral artery infarction (stroke) that had been given away by the right hemiparesis that Chris found on examination and was actually supported by the history. This is often the typical scenario for us in that the neurological history isn’t as billed and once we get the full story along with our examination we’re usually able to sort things out even without sophisticated scans or tests.

Nan evaluating the young patient with microcephaly and CP

The other gentleman that Chris saw in the hospital ward was also described to us as confused and rightly so as he had come in with a GI bleed and a hemoglobin of 4.0! As is so often the case, though, his story was complicated by his exam which was very abnormal with a mild hemiparesis that no one could really tell us about as far as when it happened as it was unclear that the patient or family were even aware of it at the moment. It could have been a prior stroke or one associated with his anemia, but either way it wasn’t something that we could necessarily treat and was therefore an incidental finding. It was his GI bleed that needed treatment and that certainly wasn’t something we were going to deal with.

All in all, the day was rather slow, but it was also the case at the main clinic so that was some reassurance at least that it wasn’t just neurology. When the light rains begin in March it is a time that many things slow down just a bit. Travel is often more difficult from the local villages as the roads are muddy and wet or fields are still in need of planting with the recent drought conditions pushing that season back a bit. Life moves at a different pace here and things that we often consider as essential are still necessary, but happen on their own time schedule that we don’t always control. This is Africa, after all….